Lagarde and Germany, How It Keeps Getting Worse

Lagarde and Germany, How It Keeps Getting Worse

Maybe this was inevitable. After all, it is how things work in a lot of other places. When all is lost, that last thing that happens is the lawyers come in and pick through the bones.

Christine Lagarde has been nominated to replace Mario Draghi as the next head of Europe’s central bank. She has a very long and distinguished career, currently as head of the IMF. Largarde, however, is no banker. Nor is she an Economist.

Having worked as a lawyer first and then a politician, it remains to be seen whether or not her lack of formal training in Economics ends up being a benefit. It was the Economists who led the world into this state, and then left the global economy in the clutches of its aftermath. Perhaps trying someone else outside of the discipline may get things back on track.

While that’s likely the case, the question as it relates to Lagarde doesn’t leave much room for optimism. Though she may not be one, she does sound like one. Worse, she has behaved like one.

Appointed as France’s Finance Minister in June 2007, Ms. Lagarde had a real chance to make a big difference, to really distinguish herself in a good way. When everything is going wrong, there’s the opportunity for someone to shine. It just wasn’t her.

In October 2007, barely one month after the Fed’s first 50 bps rate cut (and the ECB’s early panic), as France’s Finance Minister Largarde told her colleagues in Washington that, yes, subprime was contained.

In this environment, despite a disappointing second quarter, euro area growth should bounce back in the second half of 2007, driven by strong domestic demand: the healthy labor market should benefit household consumption, the business climate remains at an historically high level, and current production capacity utilization rates suggest that there will be appreciable growth in investment.

It all sounds so eerily familiar, the deja vu as to how the economy is always so strong and how it will always withstand any headwinds no matter how unexpected. “In 2008, while the factors impeding economic activity may become less acute, especially in the U.S. real estate market, growth should gradually regain its full potential and world trade should pick up.” That’s not a lawyer speaking. It is, however, something an Economist or witless politician would say (and many did).

That may be the best description of a central banker; the combination of those things.

Even if she knew nothing about the global economy, the best lawyers know which “expert” opinions and counsel should be rejected. Facts are supposed to matter.

By November 2008, denial quickly turned to promising it would never happen again. World leaders, sorry, “leaders”, gathered in Washington for an emergency summit. Having denied for over a year and a half there was one, the politicians turned everyone’s focus to making sure there would never be another one.

Lagarde was at the forefront of these talks. Pushing the European view of more, more, more regulations, her profile was raised in all the right places. In her view, it was a bunch of greedy Wall Street bankers who had brought the world to such a dangerous state. Never once did she look at the regulators themselves, especially central bankers and their moneyless monetary policies.

We believe no product, no players and no territories should be left without supervision and regulation.

Days after TARP, France’s Finance Minister promised the new regulatory overlay that was to come out of 2008 “will ring the bell when a threat to the system emerges.” Like you, I still laugh at that one.

Lagarde, of course, went on to take over the IMF – in June 2011. It was another fortuitous opportunity to distinguish herself as something other than conventional. Never happened.

Instead, as Euro$ #2 wrecked her home of Europe she would sit silent. And remain silent during the rising dollar episode of Euro$ #3. While China, Brazil, all of Asia, practically, were dealt devastating blows from a malfunctioning global monetary system, where was Christine?

Unlike those economies, her star never stops rising. Performance never once matters. In 2016, despite what had just happened in the IMF’s domain of global finance she was called a “rock star” anyway. Ken Rogoff, a former chief Economist for the organization, said:

She is enormously impressive, politically astute and a strong personality. At finance meetings all over the world, she is treated practically like a rock star.

Impressive how? Personality and being politically astute might be good qualities to possess but at best as secondary characteristics.

Following that, Glamour magazine named Lagarde one its 2016 Women of the Year. Janet Yellen would tell the publication, “She approaches age-old problems in fresh, innovative ways to strengthen the ties that bind the global economy.” Huh?

Yellen said this while many EM countries which had been counting on the IMF were sifting through the smoldering wreckage of their economies – about to face the imminent political and social backlashes incomprehensible to people like Yellen and Lagarde (and Rogoff, for that matter).

Last year, the IMF was once more pulled into the forefront. This time they did something – not that it helped. Argentina was given the largest bailout in history. In 2019, Argentina is in (much) worse shape than it was in 2018 when bailed out. 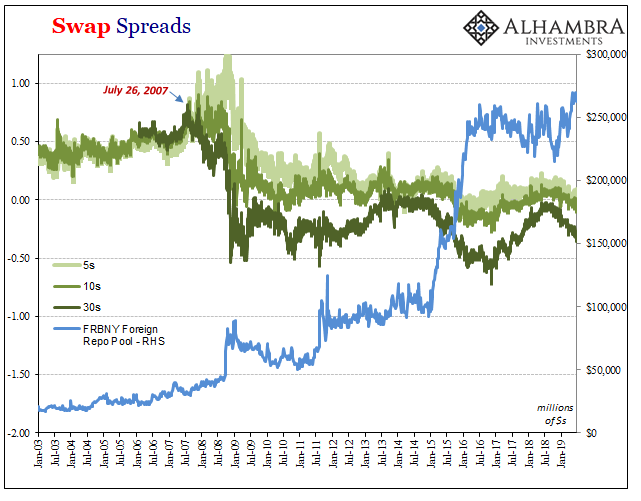 Around the same time her organization began to consider bailouts and the like, and just two days before the dollar would unleash its hell for yet another time, on April 16, 2018, Lagarde was downright central banker-ish about everything. Fearing absolutely nothing and in Hong Kong, of all places, she gushed:

The world is currently experiencing a strong upswing that holds the promise of higher incomes and living standards. Delivering on this promise is critical, not just here in Asia but around the world.

If only someone in position to do something had put in place a system that “will ring the bell when a threat to the system emerges.” It has never been the lack of bells; it was all those people dedicated to ignoring those which already exist and have been proven. The problem isn’t necessarily Christine Lagarde, it’s that she’s fully part of the same system which refuses to understand itself and what actually goes on inside of it.

Economist, politician, lawyer. It really doesn’t matter, she’s all of them. 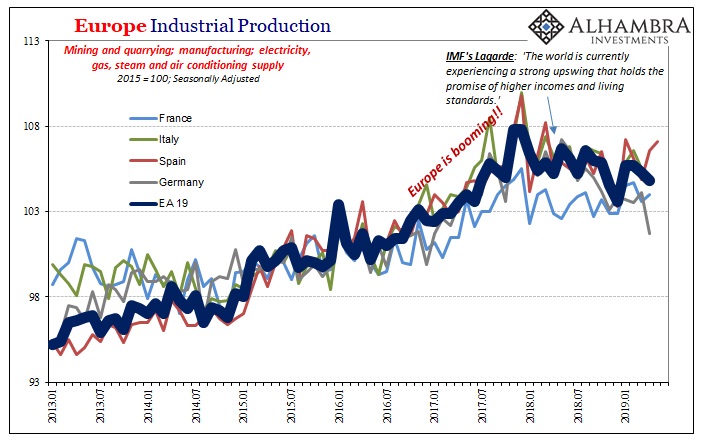 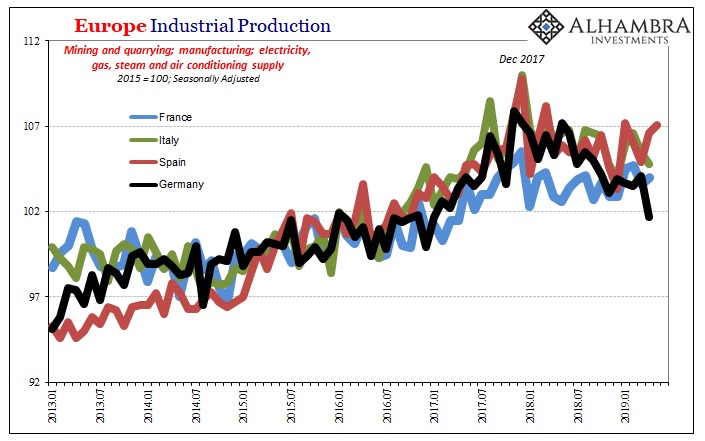 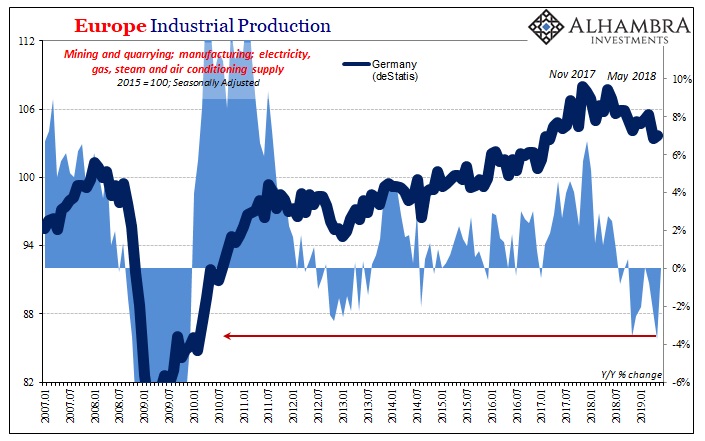 The concerns facing Europe in 2019, and the rest of the world, isn’t Germany’s leading position dragging everyone down with them. It’s how no matter what happens, the same people who let it happen each and every time are the only choices. It’s how they can’t actually recognize a boom and therefore have no idea what’s going on with Germany, Europe, or anything of consequence.

Mario Draghi’s retirement is another opportunity being predictably squandered. The only thing perhaps more regular than eurodollar squeezes and dollar shortages is the officials who time and again fail upward.

In another circumstance we would celebrate European officials nominating someone who isn’t an Economist. Not being one should never disqualify anyone for the job. But before even getting to one’s profession or training, the qualification which should come first is not being systemically deaf. 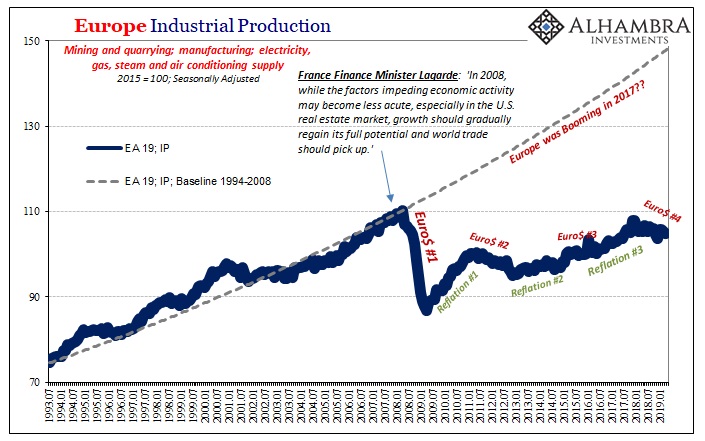