In October 2011, the bank’s Chairman bristled at the characterization. His was not going to be a “bad bank” as many in the financial media had been saying. Pierre Mariani, chief executive of Belgium’s Dexia, preferred instead to call it the “residual bank.”

No matter the label, the firm was being bailed out for the second time by the Belgian government in combination with French authorities. Any assets which could be sold at a reasonable (meaning not terrible) price would be. There were already investors lined up for the pieces of Dexia’s balance sheet unencumbered by stupidity.

It’s always a complex story with these things; in this case a little less so at least from an overview. What someone might call “reach for yield” in later years, banks across Europe not just Dexia came out of 2008 seeking to grow their way back to glory. The combination of a zero-risk weight on sovereign debt, applied at that time also to bonds issued by Greece, Portugal or Italy, plus higher returns drew these already-troubled firms like moths to flames.

Desk managers in them knew these exposures were risky, and therefore had to be hedged. That wasn’t the stupid part. No, the really mind-boggling part of the story was how: Dexia, in particular, used longer-dated derivatives. Called total return swaps, the bank sought, essentially, to short German bunds (as the swap benchmark) as protection against a rise in interest rates.

A lot of times these are marked and priced against the US dollar exchange value – which is always expected to fall in most baseline recovery models.

The bank’s strategists (read: econometric models) never conceived or at least downplayed the scenario where Greek bonds would fall in price, the scenario requiring the hedges, but that German bunds would go in the other direction. Surely the near-omniscient and all-powerful ECB would never “allow” that to happen (again, actually).

The primary risks, as almost everyone saw them, were how if interest rates rose (and bond prices fell) it would be because of economic recovery, in combination with higher inflation and eventually short-term rates as the world would surely normalize following the Global Financial Crisis. In that case, the swap hedging would’ve worked flawlessly.

But that’s not what happened, obviously. Therefore, what were cash-flow positive long-dated derivatives marked in-the-money suddenly became money pits. Once the bank was downgraded in March 2011, because of its PIIGS holdings, funding problems were greatly amplified by these “hedges” turning dead set against the bank at the worst possible time.

It is never losses which kill you. It is liquidity or the lack of it. Once the collateral calls pile in, that’s it. Unless your buffer or margin is enormous, there’s no stopping the downward spiral. At the start of 2011, Dexia held only €21.8 billion in PIIGS bonds, mostly Italian. Didn’t matter.

Despite cutting its balance sheet following 2008, despite reducing its reliance on short-term wholesale funding (a lot of it in dollars, of course) after its first bailout, it was forced to post an additional €15 billion in margin and collateral up to October 2011 on its total return swaps. The more German yields plummeted, the more the collateral calls, the closer to the end. 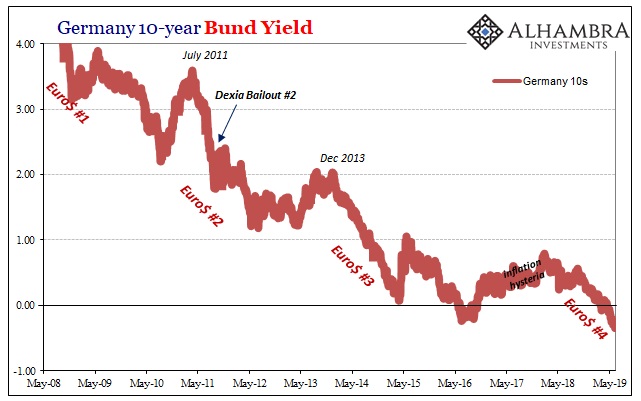 Mr. Mariani’s “residual bank” would consist largely of those obligations. It’s not that the investments proved to be bad ones, necessarily; in rough terms because of the way they were structured they cost more to fund than they yielded in returns. That’s what volatility and/or modeled uncertainty will do to pricing

It should be pointed out the role of gain-on-sale-accounting here; the profits of these trades are booked at inception, leaving the bank to write down, if necessary, any other-than-temporary charges if either the market prices or the modeled assumptions change substantially. That’s one reason why volatility is such a killer in terms of funding; a profitable trade booked years before suddenly requires billions in collateral and an increasingly unknown probability of write-downs.

That’s also why the “bad bank.” Move that uncertainty, funding and pricing, over to a relatively healthy balance sheet which can withstand those huge negative pressures. In Dexia’s case, the bad bank balance sheet came too late and consisted of whatever was left of Dexia after everything else had been sold off – this residual bank supported by its existing shareholders, by that time mostly governments in Belgium and France.

The situation with Deutsche Bank in 2019 is a bit different, maybe even totally different. We don’t know because nobody is going to say much. What we can speculate about, though, is a situation with similar outlines maybe proportions.

To be perfectly clear, I’m not using Dexia as a template nor am I saying that DB will follow in its dubious footsteps. What’s similar is mostly the predicament; what we know so far about how this later “bad bank” is shaping up.

What DB’s management has said to this point is that the assets marked for the “bad bank” are longer-dated derivatives which are (currently) cash-flow positive and whose profits were likewise booked up front (gain-on-sale). Red flags already.

To begin with, the revised estimate of €74 billion intended for the bad bank is only the level of risk-weighted assets. This raises the question of just how much notional there is involved here; if all the assets are 100% RWA, then the bank would just refer to the gross amount of assets rather than their combined risk weighted calculations. In other words, the bank is intentionally downplaying the scale of its problem (which started out at €50 billion RWA just a few weeks ago).

Two other things we know: first, DB starting in 2013 but really in 2014 (at the worst possible time) began investing purposefully in a recovery scenario. This wasn’t a secret, the bank’s very own investment presentation from May 2014 spelled out just that intended course. Like Dexia, DB intended to grow its way back to behemoth status by betting on money dealing capacities and investments in EM markets, US$ leveraged loans or junk, and the like. Risky stuff that would pay off (handsomely) should the global economy normalize in 2015 and beyond like everyone (Janet Yellen and Mario Draghi) said it would.

It never did; and despite 2017’s inflation hysteria, as 2019 wears on it doesn’t look like it ever will.

Which brings us to the second fact: bond yields, especially those of German bunds, have been dropping precipitously since last October. In other words, we don’t know how DB has hedged (or how it might have increased its hedges following 2015) its 2013-14 Reflation #2 exposures – but we can sure guess by the timing of all this.

Thus, risky assets which pay off in a recovery scenario likely hedged by instruments which follow that expected (read: modeled) course only to confront instead another liquidity driven event erasing the profit window and leaving the bank exposed as especially safety yields tumble yet again.

What we do know about the actual assets is very little, but instructive nonetheless:

The German bank believes it can divest the assets without taking large hits to its profit or capital because the long-dated interest rate derivatives are not toxic and have a predefined run-off plan, one of the people said.

It’s that last part which should grab your attention. As of right now, the bank is saying that its “bad bank” stuff almost certainly wildly in excess of the claimed €74 billion RWA is cash positive but capital intensive following a predefined run-off plan; that’s the key word here.

Except, worldwide financial conditions and probabilities are all moving very hard against that predefined run-off plan. Not only might that endanger the funding situation for the specific assets, and therefore increase the strain on the bank, it also induces credit problems and risk as (modeled) valuations must change to incorporate actual conditions – desirable or not.

To oversimplify, the more safety yields fall the greater the likelihood these longer-dated derivatives detour from their predefined run-off plan and then become “toxic” in a manner similar to what we’d observed within that troubled bank in Belgium.

What I believe is behind everything is how DB’s managers, and government authorities, may be concerned about probabilities changing so unfavorably. That what are capital-intensive but stable hedges start becoming something more nefarious as things continue to go the wrong way. Not toxicity but toxicity potential. The more bond yields fall, the more toxicity potential rises (defined also in liquidity terms in the form of collateral calls and the like). 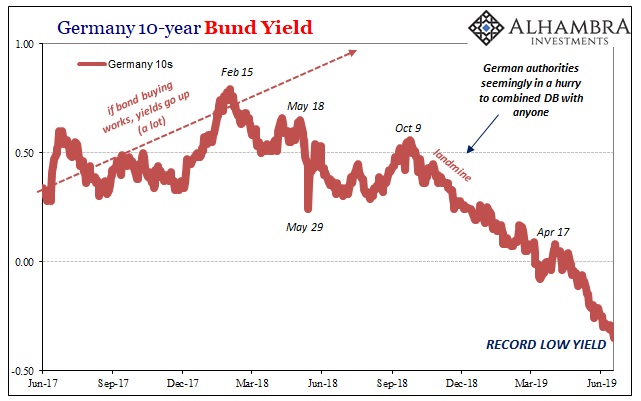 Without some other balance sheet to absorb these risks through combination, DB is left only to isolate the problem assets via a “bad bank” hoping that whomever ultimately absorbs them (with assistance?) can be able to dispose of them in a way Deutsche cannot, not on its own.

In a way DB cannot. I think that’s one piece of what is spooking funding markets right now. Not only does it mean systemic risks are perceived to be greater, therefore increasing liquidity pressures that much more in a feedback loop, how many more lesser problems with similar (and similarly rising) “toxicity” potential are out there? The “bad bank” makes these things real, a confirmation of what might merely be suspected. 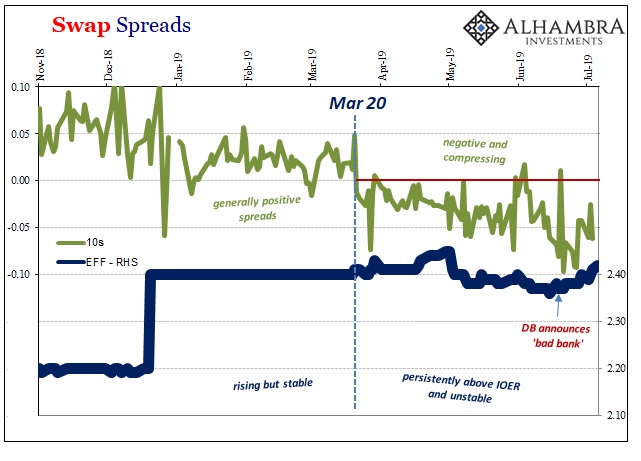 Dexia’s final demise wasn’t its own stupidity. This is a common one, unfortunately. While most had come to terms with the lesson of Bear Stearns, some bankers hadn’t completely given up on the good ‘ol days (taking big risks and believing they can be comprehensively and effectively managed especially via derivatives), very much willing (as we’ve all been taught) to give central bankers and their monetary policies the benefit of the doubt.

In this fragile monetary system, there’s not much room for margin – even though the bank today claims otherwise:

Now that the bank is sitting on €260bn of cash and similarly liquid securities, it no longer relies on these assets for cashflow and can attempt to run them down or sell them to other banks with lower funding costs and capital pressures, or to private equity investors eager to scoop them up at a discount, one of the people said.

DB has tons of liquidity margin and doesn’t need these assets. OK, then why the haphazard plan thrown together at the last minute in lieu of DB being sold altogether? Are we really going to believe private equity investors are salivating over these assets?

They might be, if the discount is big enough. That, in a nutshell, is what has likely changed and it would be directly related to the same shifting probabilities that Dexia once faced. The key difference between them can still be: move them off DB’s balance sheet before the required discount becomes too big.

What maybe unites Dexia and DB isn’t potential failure, it is this lesson: don’t bet on Economists and central bankers. They really have no idea what they are doing. It doesn’t lead anywhere good.