You can see it in the GDP numbers, even before they were revised. Globally synchronized growth was always less impressive than what it was made out to be. It’s as true overseas as in the US. The upswing was endlessly hyped, but there was so much less behind it in reality.

Reflation #2 was a whole lot better than Reflation #3, not that the second one made the difference. In this disparity, though, you can see why the bond market was never fooled. Globally synchronized growth never had a chance. It was even more empty than the 2014 predictions for overheating. 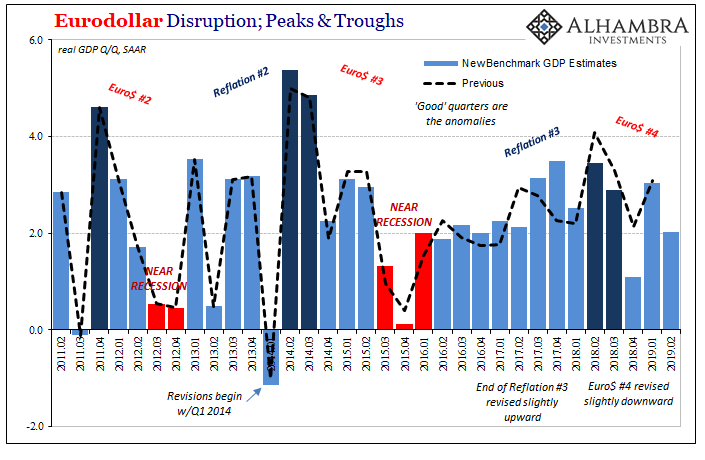 One big reason, in the American part of the system anyway, has been corporate profits. The Euro$ #3 downturn wasn’t just a manufacturing recession, more importantly it was also a profit recession. Small wonder the labor market slowed down following 2014. Even as the unemployment rate fell, however you want to measure hiring there was a clear lull (another reason why the LABOR SHORTAGE!!! was only ever present in anecdotes).

How much profits would have recovered from Euro$ #3 would have dictated the ultimate intensity of Reflation #3. Initial estimates have been suggesting that there was at least some rebound, small as it may have been.

The latest benchmark revisions to GDP, however, erase those hopes. Profits may never have recovered at all – interrupted yet again by “something.”

The GDP aggregate for corporate bottom lines is now thought to be a whole lot less especially over the last year and a half since Euro$ #4 showed up. The trend unleashed by Euro$ #3 may have been countered by renewed growth throught 2016 and 2017.

At best, depending on the specific series, whatever little positive there might have been during Reflation #3 has now largely disappeared with 2018’s estimates trimmed substantially. 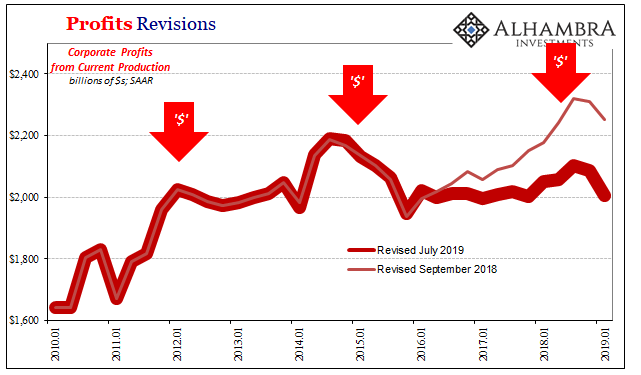 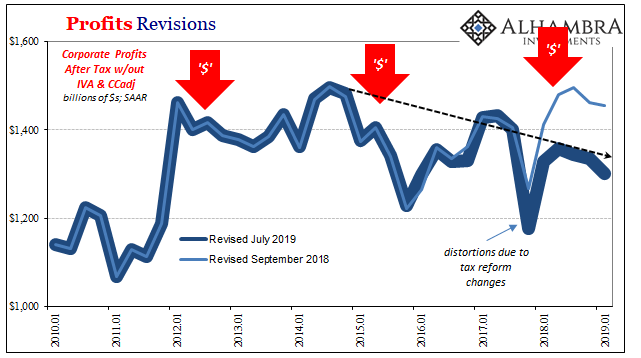 More than the headline GDP revisions, this new set of profit data really exposes the economy’s vulnerabilities heading further into the fourth downturn. Federal Reserve Chairman Powell and the FOMC have already singled out business investment as cause for downside concern. That’s not going to get any better with this sort of profit picture.

It is, though, the labor market which is most susceptible to this (more) ugly condition. The foundation for a second half rebound, even just keeping the economy afloat without getting worse, is predicated on a strong labor market. Companies that are booking less bottom-line income aren’t going to be hiring at the same pace.

This data underscores the concerns already showing up in the labor market data (apart from the unemployment rate). 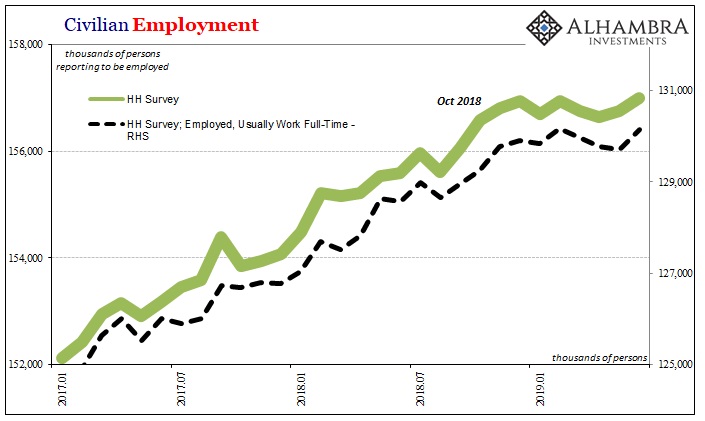 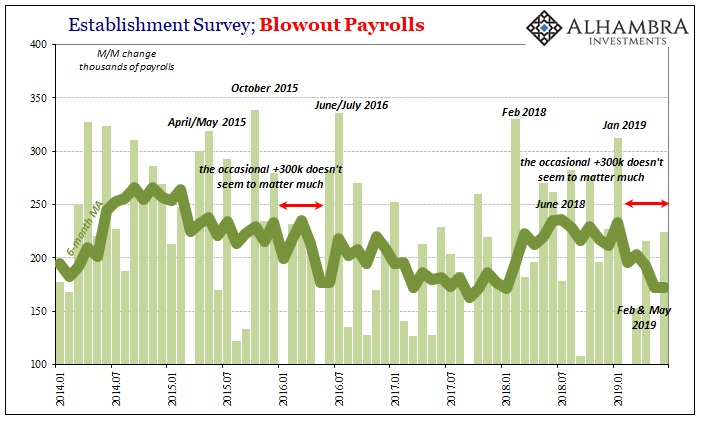 Companies that are making less profits hire less (and maybe start to layoff some), workers sense that downward tilt and as consumers become more cautious in their spending. There’s the explanation for the housing data; a real lack of confidence. 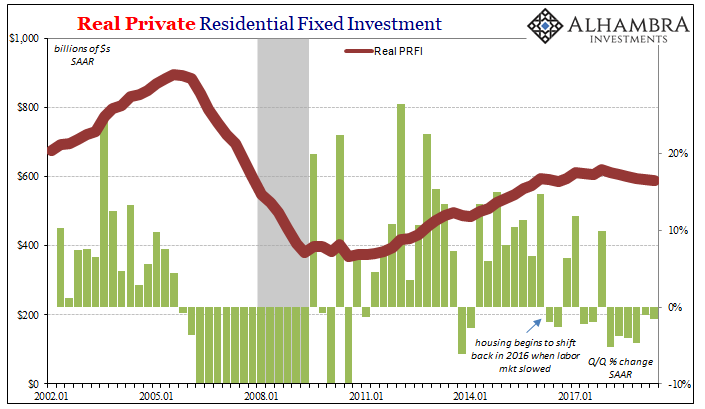 It also explains why businesses are increasingly shy and even cutting back from capex. You don’t make as many new capital-intensive commitments if you aren’t making as much profit. In the same way you don’t add to staff, you might even cut back on capital expenditures the more this condition lingers. 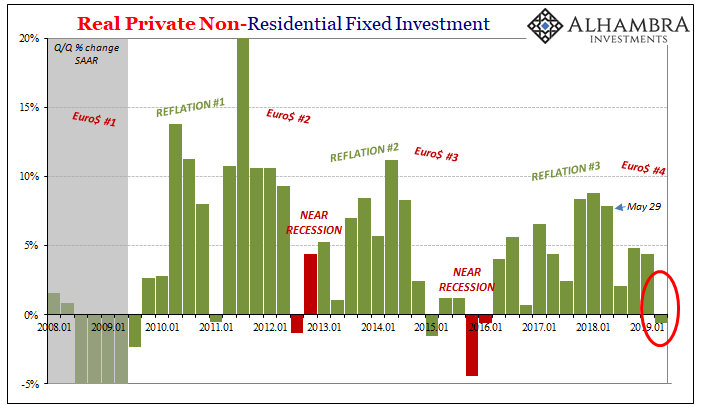 This cannot just be a concern for the economy, either. Since profits are the basis for equity investing (in theory, don’t laugh), the fundamental stock condition looks more and more like the late nineties than anything resembling the early eighties. 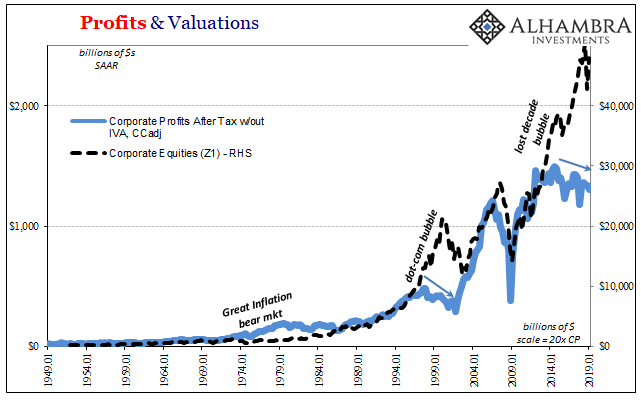 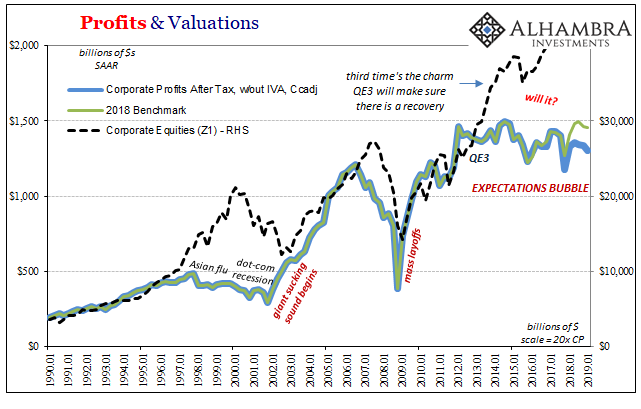 Valuations are way, way out of line except in comparison to the dot-coms – precisely because like the late nineties there has been no profit growth. Investors have been betting, and continue to bet, that the economy eventually booms. The E part of PE, the thinking goes, will rise to meet the exceedingly high level of P at some point.

These revisions suggest it’s more rationalizing than rational. After all, 2014 was five years ago already. The longer this disconnect continues, does it make it more likely or less that E will shoot upward to justify current P? There was a small case to be made when 2018 profits were slightly higher than 2017 – that the positive trend might continue and then amplify as the Fed might be right about the inflation breakout and economic acceleration.

Going the other way in 2018 instead just confirms the next interruption. And that’s before getting to whatever full condition of Euro$ #4’s downturn might be in 2019. At the very least, it’s another couple years squandered.

Share prices rebounding from the landmine are staking everything on rate cuts to be the answer – even the initial bet on QE3 and QE4 hasn’t panned out. These vulnerabilities are a lot deeper than 25, 50, or even 75 bps on fed funds. 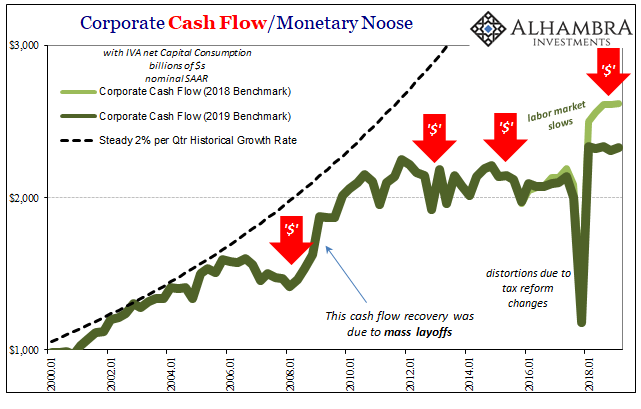