Real Liquidity Cuts Across Many Boundaries; So Does The Lack of It

Real Liquidity Cuts Across Many Boundaries; So Does The Lack of It

Things that happen in one place happen in every place. That’s been the second hardest thing to get people to realize. The first is that central banks are not central. And the reason they aren’t is because of this other factor. It truly is a global system and it’s made that way by its very nature. Credit-based money means that wherever banks operate within it, they transport systemic conditions with them.

There’s a lot which is packed into the word offshore.

Coming up again on another August 9, it still pays to remember that first one:

Why were German and Swiss banks being nationalized and bailed out over a US subprime housing matter? Eurodollars.

In this way, currency denomination becomes almost a byproduct of the system. Sure, the dollar is at center but what is shaping the dollar system will also be shaping the euro system. Banks will not be perturbed only in the one. There are no such lines of separation any more.

If a bank operating within the offshore framework is suddenly (or even slowly) gripped by uncertainty or even fear about liquidity conditions, that bank and many like it are going to seek it out wherever they can. If that means US$ repo, so be it. If it also means stocking up on German 2-year paper denominated in euros, all the better.

Germany’s short-term federal securities, especially schaetzes, have been a relatively good proxy for liquidity conditions. I mean, at such a negative yield what other reason is there to hold one? You can’t even say it is an expectation for capital gains, because over more than the last two years there haven’t been any – and I doubt holders were expecting any.

These kinds of bonds are not investments, they are balance sheet tools; ballast or liquidity insurance you buy and hold no matter how much it stinks. Signing up for an instrument that is guaranteed to lose you nearly a full percent in “yield” seems pure insanity until you realize those first two factors cited above: central banks are not central and the system which is central is global.

This is in some contrast to German bunds which balance perceptions of economic conditions alongside any potential for liquidity problems. 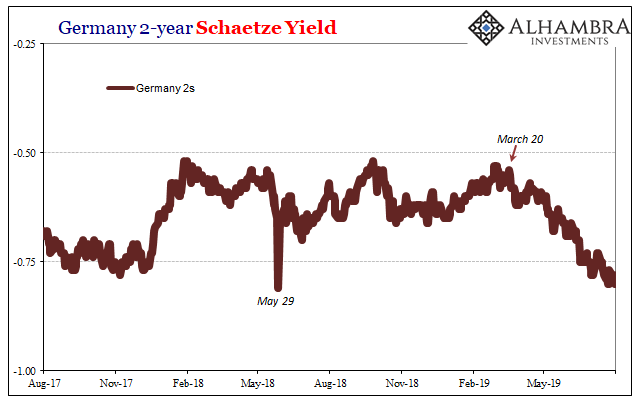 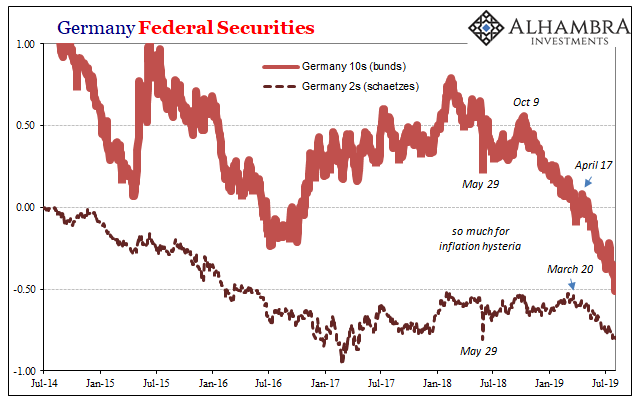 Throughout the last year and a half since inflation hysteria in late 2017/early 2018, the German 2s have been pretty uninteresting. Outside of May 29, again current liquidity, the market seemed content to pay a steady penalty for holding this form of highly prized balance sheet tool.

While German 10s had begun a near-straight line descent last October, that was the difference in timing of perceptions. The bunds suggested the system as a whole was perceiving future liquidity risks as rising, whereas the steady schaetzes were saying these were still just risks.

That changed on March 20. German 2s suddenly switched into immediate liquidity concerns – banks were again willing to pay a higher premium for these particular balance sheet tools (along with the deeper negative 10s). Risks were closer or even being realized.

And if March 20 sounds familiar to you, well it should: 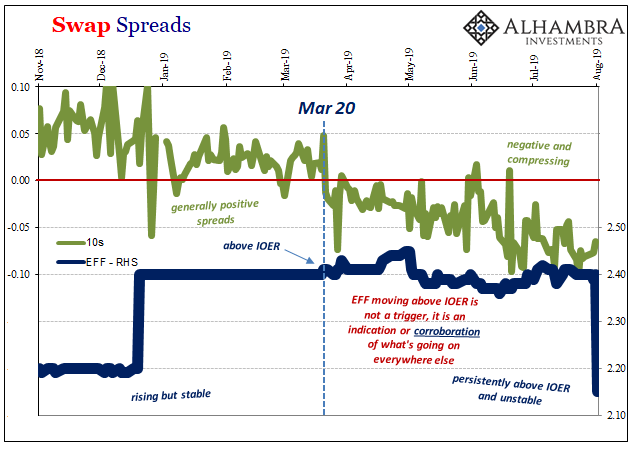 What we see here is three (and there are others) very different instruments, two different currency denominations, and yet they all indicate the same thing at the same time. Something changed around March 20 when banks in this global offshore system reacted not to liquidity fears but a changed liquidity condition.

Which central bank accommodation is supposed to comfort us? Is the Federal Reserve’s rate cut (pictured above on EFF) going to convince banks around the world to start selling their German 2s and lending again? Should we expect the ECB’s looming rate cut or even QE to positively influence whomever it is seeking out the sparest of liquidity in federal funds?

Fed or ECB, UST’s or German federals; it’s all the same thing. The latter are liquidity, the former are not. And the bond market just cannot get through to central bankers on this crucial point.

This week: market: it’s actually getting worse (swap spreads and FX, now, too) across all indications; Fed: OK, here’s one rate cut and QT ends tomorrow; UST buyers who aren’t nonbank money funds: I better get on the phone and see if I can get that primary dealer to sell if I offer an even higher price.

The message was increasingly clear: money soon, or else. Central bankers only do puppet shows, therefore we all get pulled closer to “or else.” 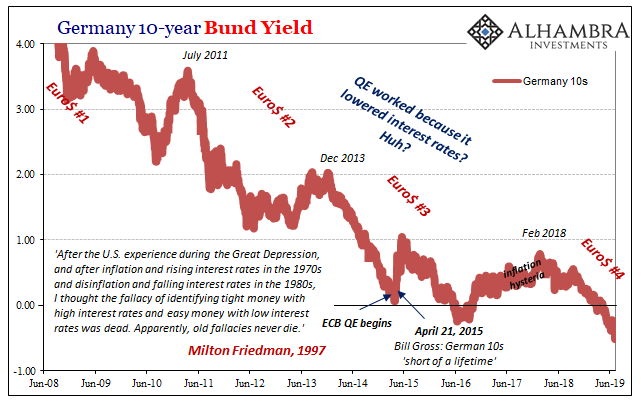 Both the ECB and Fed, by the way, are responding to economic signals rather than these rather clear market ones. The effect rather than the cause. And that’s simply because Economists don’t understand bonds. Because officials don’t, the public doesn’t, either. We’ve all been taught that central banks are central, and part of that means whatever interest rates do it has to be because of some policy instinct.

The truth is the bond market has exposed the real system and the real problems all along. Interest rates don’t tell us how helpful and accommodative central banks are being, they tell us how badly they’ve screwed up – as well as why.