Wholesale, Inventory, And The Raised Risk of Recession

Wholesale, Inventory, And The Raised Risk of Recession

Any recession still retains its inventory roots. Back when manufacturing ruled the US economy, an unanticipated buildup would be all it took to trigger one. Goods would begin stacking up on the wholesale level once retailers found it harder to move what they already had. This in turn caused wholesalers to put the brakes on manufacturing which then triggered production cuts and layoffs.

Those, of course, meant even less consumer spending and so the self-reinforcing vicious circle would eventually produce a change in the business cycle.

Monetary policy, the modern money-less variety, seeks to insinuate itself into that circle before it becomes self-reinforcing. Maybe if wholesalers aren’t so negative when retailers call a halt to the flow of goods up the supply chain that wholesalers don’t make that call to the producers. Get them optimistic about the future (with rate cuts!) and perhaps they hang on just long enough for sales to return to trend and retailers start buying in bulk again.

This is certainly one context which explains the recent rate cut from the Fed. Even if you and they believe the US economy is otherwise strong or even very strong, no one can deny what has been happening on the wholesale level. And therefore the need for some forcefully introduced optimism (whether it has any chance of being effective is a separate argument). 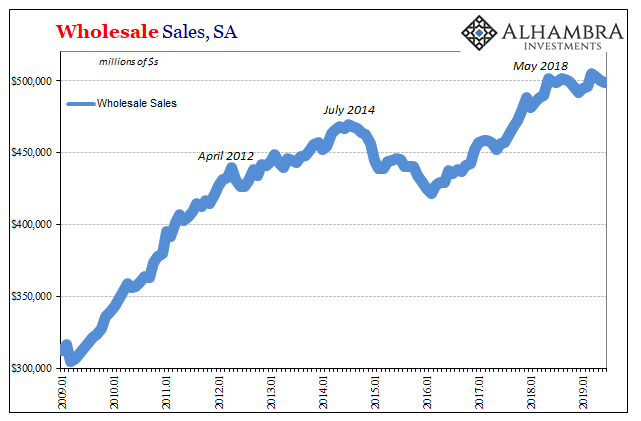 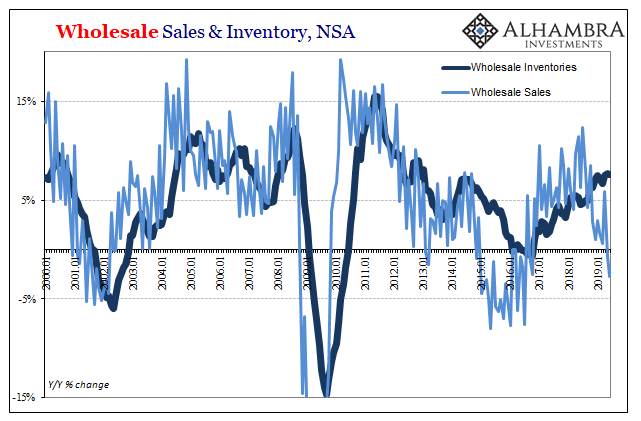 On the one hand, May 2018 – again. According to revised benchmarks, wholesale sales leveled off in that one particular month (which just so happens to be the one containing May 29). In unadjusted terms, wholesale sales have contracted year-over-year for the last two straight months including the latest data for June 2019.

But inventory has not – not even close. Wholesale inventory by contrast increased by 7% for the third consecutive month in June. Wholesalers are, for now, clinging to an excess of inventory while at the same time watching sales only now start to really diminish. For the Fed to give them just one rate cut, that’s already asking a lot since the imbalance has already proved more than temporary. 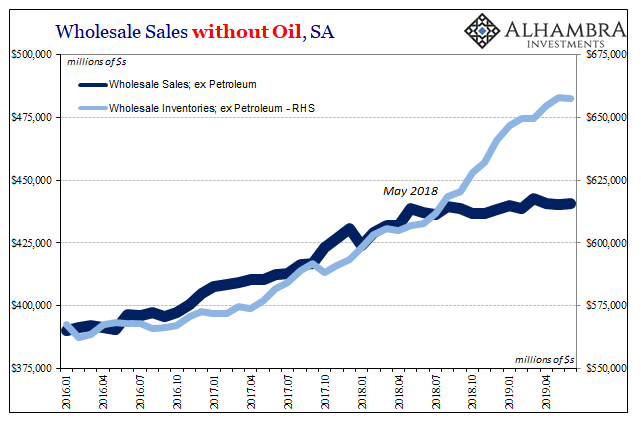 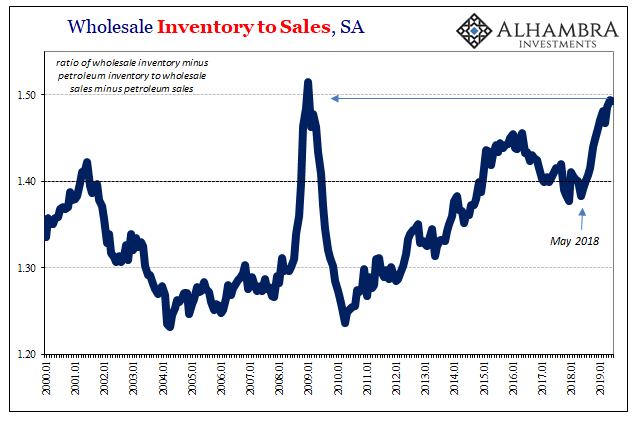 As a result, the inventory-to-sales ratio has blown out to the widest level since the depths of the Great “Recession.” The goods sector has shown a willingness to hold more inventory relative to (much weaker) sales in the post-crisis period than before 2008. Still, the change since last May cannot have been received favorably.

An unexpected inventory accumulation is never a welcome thing – particularly given how “everyone” has been expecting something very, very different from the economy. The LABOR SHORTAGE!!!, unemployment rate, hawkish Fed narrative had created a set of expectations which today seem a world apart from reality. 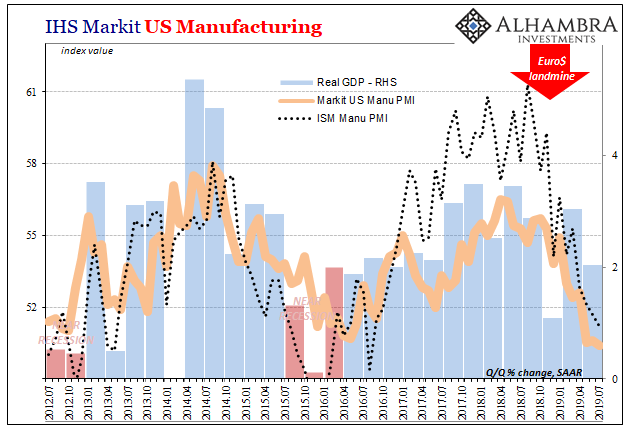 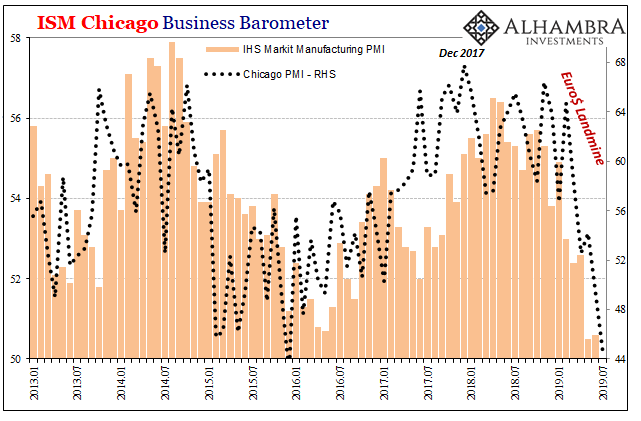 This is most likely the basis for what is being uniformly picked up in terms of manufacturing sentiment. As the IHS Markit Manufacturing PMI fell to the lowest since 2009, barely above their 50-line, the organization’s usually cheery Economists were forced to concede that instead of an economy justifying additional rate hikes there’s one rate cut already and only prospects for more “attempts” at cheering up the goods sector badly in need of something positive.

US manufacturing has entered into its sharpest downturn since 2009, suggesting the goods-producing sector is on course to act as a significant drag on the economy in the third quarter. The deterioration in the survey’s output index is indicative of manufacturing production declining at an annualised rate in excess of 3%.

The effect of last year’s Euro$ landmine on sentiment is plain – it was a financial signal to the global economy that whatever had caused last year’s economic deviation (for whatever reasons you might find compelling) it wasn’t going to be transitory. The PMI’s suggest that wholesalers have already made the call to manufacturers telling them to cut back on production as the inventory really piles up in the middle stage.

In years gone by, this would’ve been done deal on recession. Fortunately, in this one narrow sense, the manufacturing sector isn’t what it used to be. Manufacturers alone aren’t going to create one – but we can’t forget that a huge chunk of the service sector is devoted to the management, sale, and movement of goods, either.

Maybe not a done deal, but not far enough away from it.

Orders for Class 8 trucks fell last month to their lowest level since 2010, transportation-equipment research groups said. The July figure is the weakest yet since a strong rebound in truck-buying in 2018 lost steam this year on faltering freight-market demand.

“There is going to be a significant decrease in production coming in the second half of the year carrying into 2020,” said Don Ake, vice president of commercial vehicles at transport research group FTR.

Along with the employment figures, this is all data which at the very least indicates how the risk of a recession is the highest it has been since 2009. The bond market certainly seems to agree. 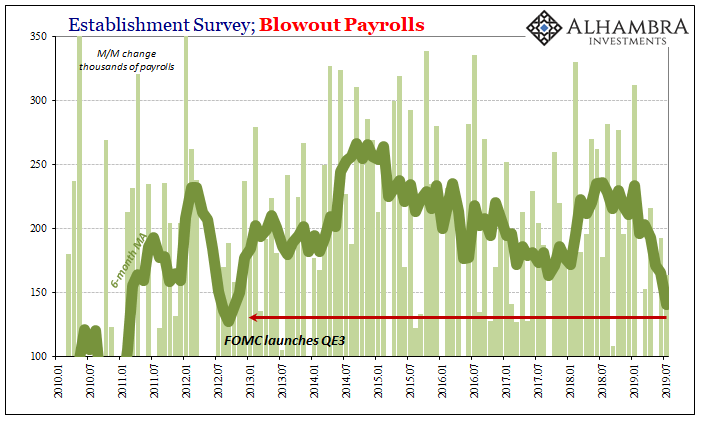