Following up on yesterday’s look at the concept of repo reserves. These are, as hopefully that narrative retelling established, very different from the inert byproducts of QE; or, bank reserves. The explanation for record low and negative yields amounts to a pretty intuitive process, though in practice it is incredibly complex.

Sovereign bonds as “pristine” repo collateral (what some Economists have called information insensitive securities not subject to adverse selection processes) are not investments. They may be to you and me, but they are little more than ballast or balance sheet tools to the financial institutions holding and using them.

Their usefulness is derived from the threat of losing repo funding due to several possible factors – mostly related to the potential for other parts of credit markets to become illiquid and unstable. When that happens, and it does, and it will, the use of debt instruments of all kinds in repo becomes more uncertain to the point of being undesirable. This was the lesson of Bear Stearns.

Yesterday, I used a Merrill Lynch corollary to that lesson in order to sketch out the bogeyman that now lingers in the minds of bank managers (more likely desk managers).

Moving beyond words and the narrative form, I intend to diagram the simplified processes involved in order to more fully illustrate the motivations behind all this. With low and negative yields multiplying across the planet, it’s imperative to truly understand them and what they mean.

What I’ll present here is a very simple model. In practice, balance sheet design (both assets and liabilities) is far more complicated, intertwined, and, frankly, weird. There are factors involved that I won’t get into here, starting with liability costs (what banks pay for repo) as well as things like securities lending and derivatives which can influence decision-making at various points. I’m excluding them only for purposes of clarity; to isolate the one core concept.

We begin with a simple “bank” more like what used to be called a commercial bank, nowadays a shadow bank subsidiary (or single desk) of otherwise banking institutions. They invest in risky assets generating higher returns and fund their assets through wholesale interbank markets like repo.

We’ll assume (Figure 1-1) that these assets are at first easily priced by regular market trading. In that sense they are only illiquid in their potential to become so. When they are priced normally within accepted tolerances, we’ll also assume they are readily accepted collateral (skipping haircuts here, as well). 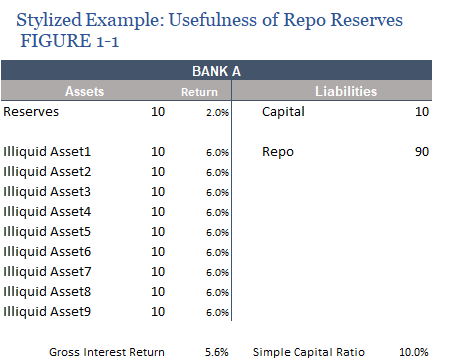 Next (Figure 1-2), we assume something happens in the market for two of the securities. The suddenly illiquid market prices them at 20% discounts to par/book and therefore repo market counterparties will no longer accept them at face value (having removed haircuts, we’ll assume they just won’t accept them at all). 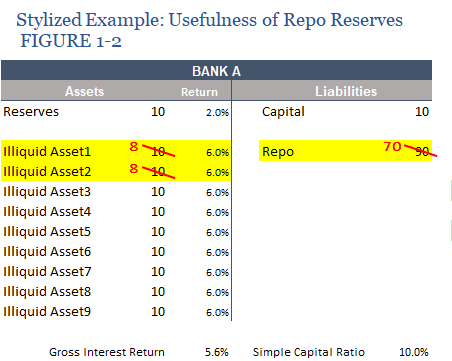 Bank A now has a $20 funding shortfall that has to come from somewhere – and the clock is ticking since this is overnight funding that needs to be resolved by the end of business. There is, or used to be, an option to borrow in unsecured interbank markets (Figure 1-3) like fed funds (which would certainly drive up the demand for such spare liquidity). 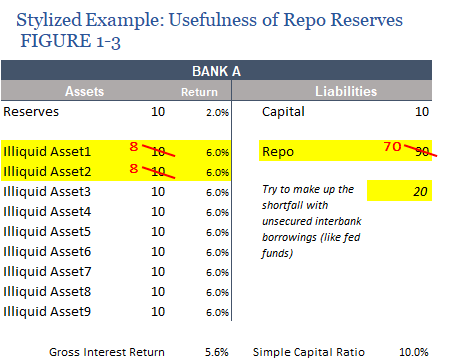 But we’ll further assume that’s either a bad option or no option at all. What’s left is the Merrill Lynch scenario, though in our example here we aren’t anywhere close to being driven toward a 22-cents-on-the-dollar July 2008 fire sale situation. An 80-cents-on-the-dollar fire sale (Figure 1-4) given this simple setup is more than enough to demonstrate the gravity of the situation Bank A is facing. 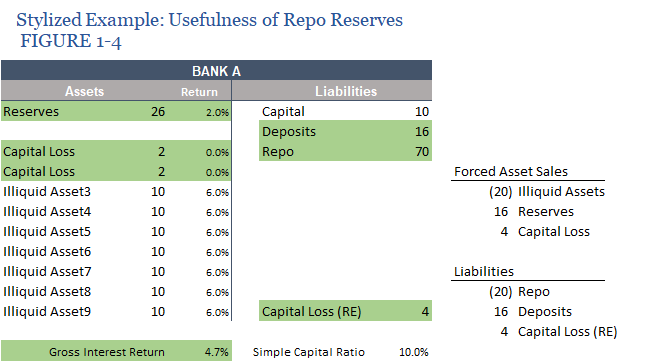 The firm is left no other option than to liquidate those two assets in order to get out of the repo funding shortfall. It realizes, however, their current market value of $8 each. That puts only $16 additional into reserves (cash), creates $4 in capital losses which will have to run through the income statement (like Merrill’s).

On the liability side, we create an accumulated capital loss and increase deposits (cash) for whomever paid for the non-toxic toxic waste.

That already raises the first issue. The gross return of the portfolio is substantially diminished by the lost income plus moving assets into lower returning cash. The firm can certainly redeploy the cash to buy more risky securities, but its not likely to do so until the turmoil reaches its conclusion. For the time being, it is stuck with a substantial reduction in overall return potential (4.7% compared to 5.6% to start with).

That’s not even the worst part. Bigger problems show up when Bank A reports that $4 loss in its quarterly earnings (Figure 1-5). It reduces capital by the same amount which slices the simple capital ratio from 10% down to 6.3%. 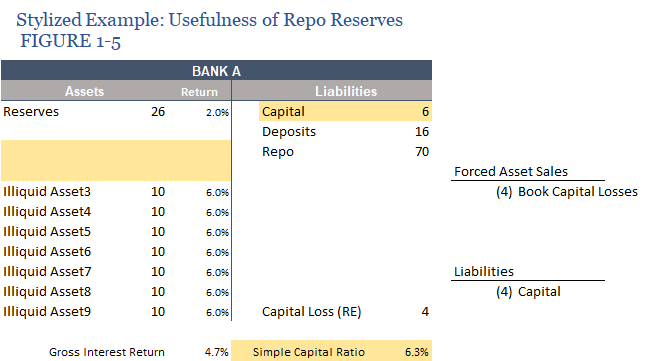 You can see why banks might want to avoid this situation: lost income, capital losses, eye popping quarterly reports during already questionable circumstances, and finally deteriorating balance sheet metrics maybe at the worst possible time (it certainly was for Merrill).

These don’t show up in a vacuum, either, which means that there are follow-on effects banks must always consider – including repo counterparties asking for even more collateral for no more reason than how Bank A is now perceived to have confirmed to the world it really is a “troubled” institution. That puts you into the class with Bear Stearns, pushed further toward the even more serious survival risks associated with being in that class.

Admittedly, that’s all a bit overdramatic for the current climate outside of the Global Financial Crisis. However, not as overwrought as you might think. Firms are not worried right this minute (outside of maybe a certain German bank) about tomorrow being placed in the same tier as Bear Stearns once was just before its demise.

Still, you better believe they are thinking about avoiding even the first steps down that same road; they’ll do whatever they can to stay as far away from even being questioned in the same way. To avoid all that self-reinforcing downward liquidity spiral, to nip it in the bud before it ever gets started, you need repo reserves of collateral. Not bank reserves. Not cash.

Reserves of good and unquestionable collateral (even if the security’s issuer is the brokest institution on the planet). Whatever the market determines is the most dependably liquid instruments (information insensitive). 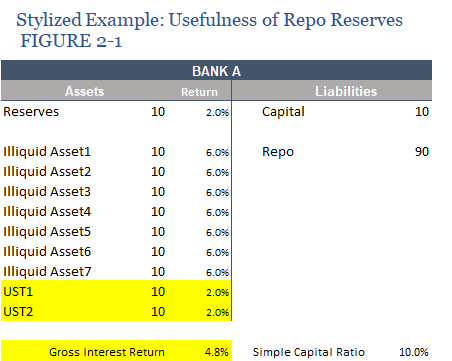 Instead of filling out the asset side with all risky and potentially illiquid securities, Bank A prudently chose not to believe the hype about QE and to instead slot in some UST’s (Figure 2-1). The effect is already significant; the gross return drops to 4.8%, which means this kind of liquidity insurance is not cheap (which really says something about the constant heavy demand for it).

What benefit (Figure 2-2) does Bank A derive for the large liquidity premiums it is paying in the form of opportunity cost? 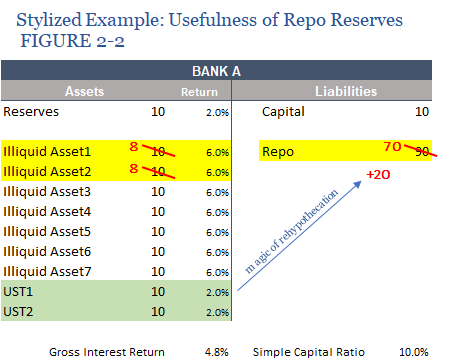 We’ll assume the same scenario as above. The market goes illiquid for a couple of its securities, reducing their prices by 20% each and therefore leaving them rejected in repo.

Only this time Bank A starts with “spare” UST’s already in its inventory. They are probably funded by other repo arrangements (and this is where it can get truly and bizarrely complex; the business of securities lending) but through the modern magic of rehypothecation (which has been changed by Basel 3’s imposition of the LCR; we won’t get into that here) the firm can substitute UST collateral (Figure 2-3) for those other securities no longer negotiable in the repo market. 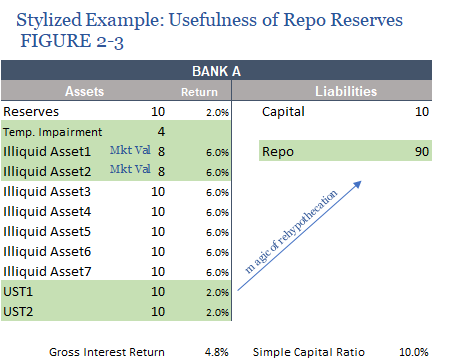 What that does, marking our balance sheet to market, is it buys the firm time. As before, we are assuming that the assets are money-good and therefore there aren’t any credit losses associated with them – only illiquid markets which lead to pricing and therefore funding anomalies.

The temporary impairment can be carried for as long as there are, again, no credit losses taken by the instruments. And since the UST’s have made up the repo market shortfall, Bank A is fully funded in order to withstand the market hiccup (Figure 2-4). 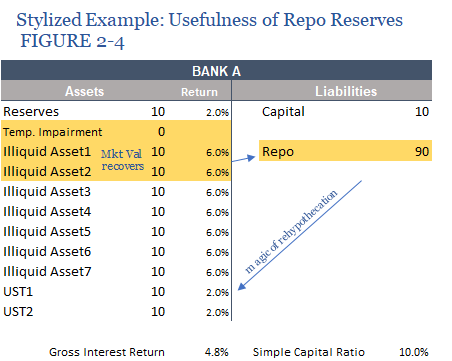 Once that resolves itself, everything just goes back to the way it was before. For a lower return, Bank A has bought itself the capacity to weather a severe financial storm.

Therefore, the demand for repo reserves, these pristine forms of collateral, is very much related and correlated to perceptions about systemic risks to the other parts of its balance sheet. The serious probability, which is much higher than Ben Bernanke, Janet Yellen, and Jay Powell would have you believe, that something realistically could happen in a market which then might drive the illiquid assets out of repo. 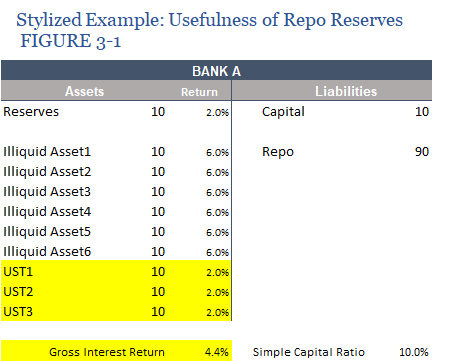 The more Bank A (and those like it) builds up it repo reserves (Figure 3-1) the more we know it’s because it is perceiving greater risks to the other parts of its balance sheet (again factoring considerations beyond this simple stylized example). It is actively and purposefully trading off opportunity and taking on the greater costs associated with what is liquidity insurance.

Like any insurance policy, you pay more for it if you think it is more valuable to do so – in our example, avoiding the first scenario, the Merrill Lynch case, which leads to all the disastrous sorts of self-reinforcing processes. You might even slip in a few negative yielding forms of sovereign debt (Figure 3-2) if you had those exposures (this system is global) and felt the risk was material. 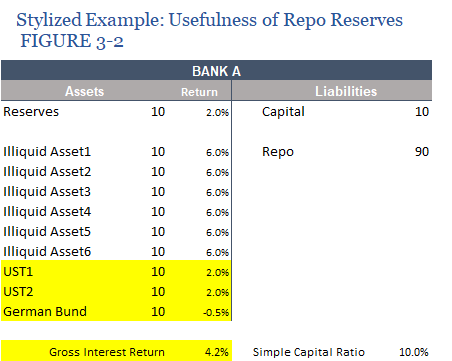 Again, all the negative yields do is raise the opportunity cost by lowering the blended return of the whole balance sheet (asset side). And from that we infer what the bank perceives as liquidity risk across all its assets. The more included in or added to repo reserves, the greater they must be (Figure 3-3). 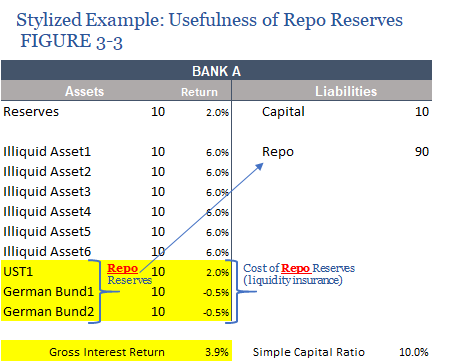 Like any basic financial process, even though in practice it is unbelievably complex the principle is still simple and the same – striking some balance between risk and return dictated by expectations about the general environment.

In terms of negative yields, the return you need to appreciate is not those negative yields. Sovereign bonds are not investments; they are a very powerful form of balance sheet insurance. Right now, this liquidity insurance is in high demand all over the world – in large part because the Fed and other central banks have only conducted puppet shows of QE with bank reserves in their starring roles. 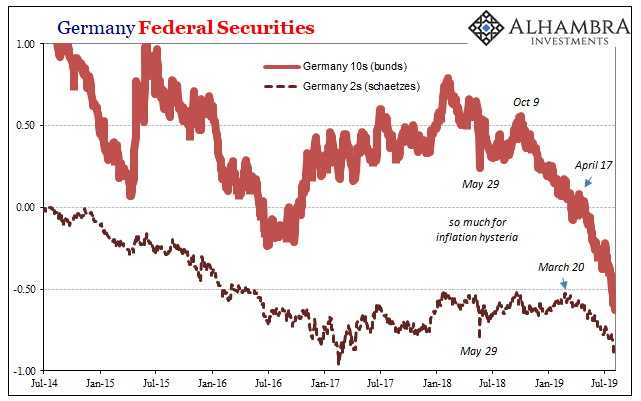