US money markets are in a state of visible disarray. When repo is front page news that can’t be good. Most people including those in the financial media have no idea what a repurchase agreement even is or why there are so many of them.

And we’re still talking about yesterday before even getting to the fireworks today. As it stood on Monday, the effective federal funds (EFF) rate was 2.25%. The current policy range is 2.00% to 2.25%, meaning EFF butted right up against the top end of the range (15 bps above the joke, IOER). Since federal funds is how the Federal Reserve communicated its monetary policy stance, this is a very serious situation. 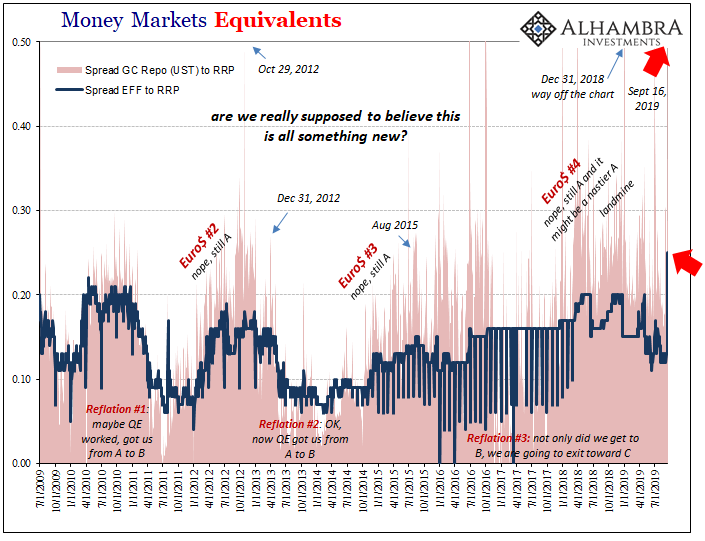 You can’t lose control of a money market rate. You just can’t. The Fed did that in 2008 and it didn’t work out so well. While it may not mean much to the layperson on the street, this stuff matters a great deal where it counts the most. Already under suspicion, a clear escalation in the liquidity situation can only lead to even bigger problems than we’ve already witnessed this year.

As a consequence of EFF, the Federal Reserve’s New York branch has already conducted an “overnight repurchase agreement operation” this morning (concluded as of this writing). The 24 primary dealers are the only firms eligible to participate in it.

The real problem, as we’ve been writing about for more than a year and a half, isn’t really federal funds. This latter market is a shell of its former self, the sparest of spare liquidity. Therefore, if that last piece of liquidity finds itself under such huge demand that it is close to violating targets, what does that say about everything else? 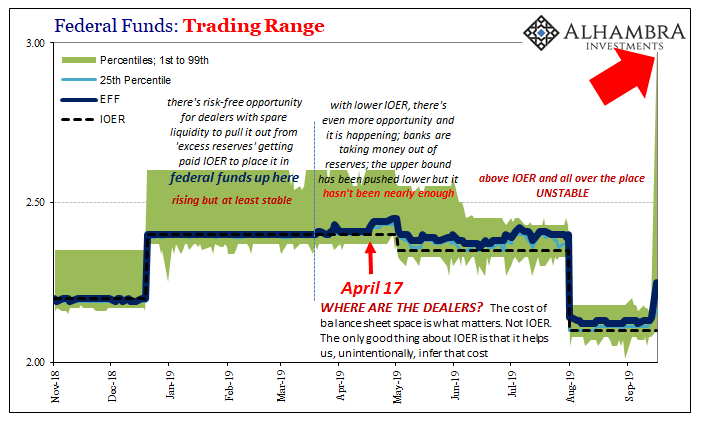 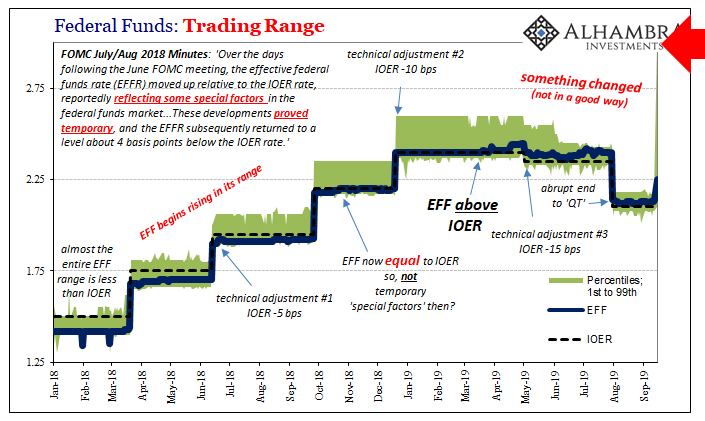 FRBNY tells us that it was real chaos in federal funds yesterday. As you can see above, the reason the effective rate (a weighted average) jumped so much was because there were transactions going off as high as 3.0%! The 25th percentile was 2.16% while the 75th was a ridiculous 2.45%; which means that half of all fed funds transactions took place between 6 bps and 35 bps above IOER.

And a quarter more between 35 bps and 90 bps above IOER. It leaves us to ask the same question, one that has nothing to do with seasonal bottlenecks. As I wrote back in April when things really started to get serious:

It’s an easy profit. There really is no risk involved here. Though unsecured, the lack of unfamiliar players makes it pretty open. Why keep reserves parked at IOER when you can pocket 5, 10, 20 additional bps? It doesn’t seem to make sense. Players should be falling all over themselves to jump in, which would, again, push the weighted average lower.

Now the spread is an easy 35 bps if not as much as 90 bps. Where the hell are the dealers?

What I mean, quite simply, is that if balance sheet space becomes even more scarce, it will require still higher rates across the whole range of federal funds to incentivize dealers to jump in. Exactly what we have seen. Thus, the higher rates across the EFF track, from that we can infer a negative change in balance sheet scarcity – they are intentionally passing up greater and greater nearly risk-free profit opportunities.

Let’s back up a minute. The big liquidity problem is not EFF and federal funds. Again, all federal funds tells us is that there must be an absence of dealers to arbitrage what should be easy, easy profit. If they aren’t taking advantage in fed funds, they must be restrained and strained where it does count.

And that is the repo market. Why?

What we observe here, as well as other data, is how the repo market is the last line of liquidity defense in the offshore world. It has become the lender-of-last-resort because the central bank cannot be counted on for what used to be its primary use (raising the question, are central banks, in fact, useless? This isn’t just a rhetorical flourish on my part, it is a legitimate doubt.) This was the major evidence of 2008, reinforced a second time, echoing Bernanke’s bewilderment about transmission, in 2011.

As if to prove that fact yet again, the Fed is doing a limited and non-specific overnight repo operation. Hardly the kind of thing which fits the bigger picture. The rest of the world is desperate for dollar funding, and the central bank steps in to do as little as possible; not because it doesn’t care about any of these things, rather because it has no real idea what is actually going on.

The way it is being characterized is how this has shown up all out of the blue. It isn’t. The disorder has been building for months now. What happened the past few days is this escalation running into one of those seasonal and calendar bottlenecks, these latter having the tendency to reveal more completely the scale of the building dysfunction. 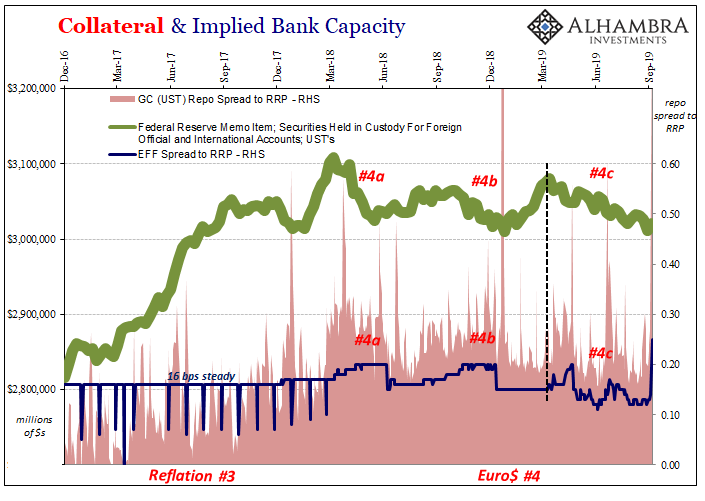 Go back to March 20. That was the day EFF broke above IOER for the first time. Ever since, we’ve seen repo problems proliferate and not just on the cash side or the GC repo rate. Collateral, too.

What you see above (green line) is the balance of UST securities the Fed reports it holds in custody on behalf of foreign entities (some official, some commercial). Ever since the week of March 20, UST’s have been disappearing from custody.

That could mean several things, but like the foreign repo pool it suggests that UST’s are being used as a reaction to the growing dollar shortage. Almost certainly the repo market as collateral (borrowed or transferred). 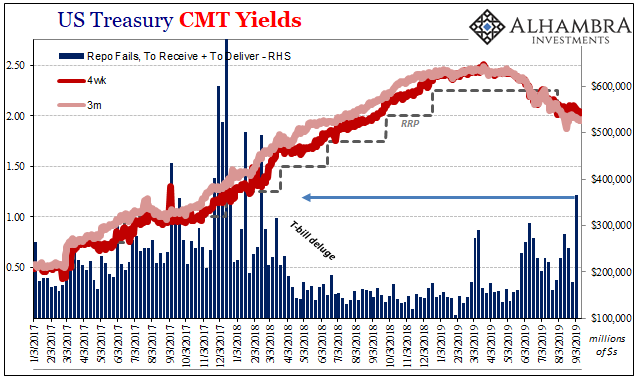 Not only that, two weeks before March 20 domestic repo fails jumped. We’ve been told repeatedly how the T-bill “deluge” of early 2018 was harmful (what the FOMC later last year called “special factors”). It was never true; if anything, the flood of bills was a godsend as it delivered very badly needed pristine, on-the-run securities.

But then despite the ongoing T-bill deluge, repo fails rose in those weeks before all the trouble mid-March. It’s only been getting worse since. As of the latest data from FRBNY for the week of September 4, combined fails were more than $350 billion for the first time since early 2018 at the outset of Euro$ #4.

That’s already a big number by itself, $366 billion, but in the context of the overwhelming supply of bills it can only be an enormous shortage of collateral.

What we know is: 1. Dealers are being especially shy, so reluctant to add liquidity that the Fed is being forced into what can only be characterized as an emergency measure (O/N repo “operation”). It’s not exactly TAF reborn, but it is, alarmingly, on the same spectrum. 2. The epicenter of all these problems is the repo market, which just so happens to be the only effective lender-of-last-resort left. 3. More and more indications of collateral shortages and collateral bottlenecks.

I wrote about it last November during the landmine. The Fed never did get the message about repo during the “somehow” Global Financial Crisis but you better believe the banking system did:

It was also another potential bottleneck, not that anyone saw it coming. That’s the biggest thing about the crisis in 2007 and 2008; all of these various eurodollar, cross-border functions were pictured as robust and reinforcing. Liquidity and monetary fears were seemingly allayed by the menu of flexible, dynamic liability choices, and more than that supposedly “safe” options in places like repo.

As it turned out, collateral flow was as susceptible to breakdown as unsecured lending. You can even make the argument repo was worse for fomenting further crisis than what traded under LIBOR. An enormous collateral shortage developed as flow was interrupted.

Which is almost certainly why UST’s, including T-bills, have been in such high demand since the landmine.

What do I think is going on here? Why are dealers being so shy?

This goes back a long ways, one of the major faultlines in the global system that was never really given much consideration (in favor of QE’s puppet shows). In the precrisis period, MBS had been used in one capacity or another throughout repo. Once the crisis hit, and MBS increasingly unusable in repo, it left the entire global system to scramble in funding markets. The system never recovered.

In the post-crisis period, the lack of substitute for MBS remained an ongoing hurdle (especially since some banks particularly in Europe had sold their MBS to the Fed in QE and then bought PIIGS bonds as their primary repo substitute). In other words, there’s been a collateral shortage ever since the word subprime entered the mainstream vocabulary.

Banks, however, have not sat idly. They’ve been creative in attempting to deal with the constant lack of supply (before the T-bill deluge). One way around it was to have transformed other forms of lower tier collateral using what UST’s (or German bunds) might be available.

Only, in this case it wasn’t subprime MBS that was the starting block for the transformations. Instead, more and more, it was junk corporates, CLO tranches, leveraged loan products and the like; and, more than that, all of those things offshore, Eurobond, and EM.

Why, after the repo experience in 2008, would the global banking system be so stupid? Three words: globally synchronized growth.

Some, not all, banks really bought into the hype. If global recovery really was a viable even likely option then these risky activities wouldn’t be very risky at all. China back on track, a booming US and Europe, and EM’s coming along for the ride would’ve all meant very low probabilities for some of the risks that are coming out now.

Dealers more than anyone know about these risks. They very likely know who has been heavily into transforming collateral and what utter trash has been transformed. Going back to November:

Collateral is a huge piece of the global wholesale liquidity puzzle, especially offshore. It is, in essence, a form of reserves that functions in ways the Fed’s bank reserves cannot. If you have access to collateral, then you can keep your liabilities liquid and rolled over especially rehypothecated. Predictable and manageable. If it’s hard to find and costlier and more difficult to obtain, you won’t be the only one scaling back.

I’ve written all year how it seems like the bond market has been spooked about something. The bond market is dealer banks (more than specifically primary dealers). They have become more and more shy about liquidity functions (which, we can now see since it was ended six weeks ago, had nothing to do with QT).

An overnight repo operation is the Fed basically saying, we don’t know what else to do. In that way, maybe, yes, TAF II.