With China closed for its National Day Golden Week holiday, the stage was set for Japan to steal the market spotlight. If only briefly. The Bank of Japan announced last night that it had had enough of the JGB curve. The 2s10s very nearly inverted last month and BoJ officials released preliminary plans to steepen it back out.

Japan’s central bank says that it might refrain from buying JGB’s at the long end. This is upside down from when YCC was first attached to QQE more than three years ago. Then, Yield Curve Control was meant to assure markets that Japanese government bonds wouldn’t fall too sharply in price as the world, and Japan, got back to more normal conditions.

How times have changed – because nothing has changed. Today, YCC might end up being used to assure markets that Japanese government bonds won’t rise too sharply in price as the world, and Japan, spirals further and further away from more normal conditions.

You really do get the sense that they are just making it up as they go along. The bond market does what it does regardless.

But in the moment of BoJ’s announcement, it was like a dog whistle to bond bears everywhere. A ha! they screeched. See, we told you that eventually the bond market would run out of buyers. For them, this new direction for YCC means one less pocket for governments to stuff their securities into.

Without central banks to buy sovereigns, who will be left? Surely the bond market will crash because why else would anyone own them.

For a few hours, that view prevailed across global markets. JGB’s sold off pretty sharply and it spread to Germany and even to UST’s. The idea of “too many” bonds has become entrenched in the collective imagination. The BoJ announcement was seized upon as somehow proof. If the Japanese central bank doesn’t want bonds to rise in price, then supposedly that’s it.

The BOND ROUT!!!! didn’t last very long, though. At 10am ET, the Institute of Supply Management (ISM) released the latest calculation for its manufacturing sector PMI. It was pure ugly, the lowest since 2009. At 47.8, well below 50, that puts September 2019’s reading beyond the worst points of either Euro$ #2 or #3.

Once again, the world is reminded of the growing potential for a nastier #4. 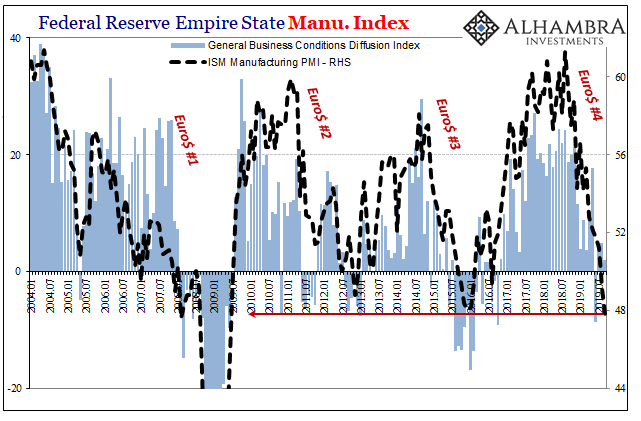 Given the ISM’s internals, Japan suddenly disappeared from market chatter, dissipated almost as quickly as it arose. Economic perceptions got a serious jolt from a very mainstream indicator, and buyers showed up in overwhelming capacity – not for the first time.

While the media still talks about trade wars, there is no indication that’s really at issue here. The index for New Export Orders sank to just 41.0 in September, incredibly low, but what would that have to do with US tariffs on Chinese goods? And since we don’t actually export much to China, that’s not Chinese retaliatory levies, either.

It is indicative instead of a global downturn which month after month seems to be inching toward, if not already within, a global recessionary environment. The very place a dollar shortage would impact first and hardest is where the weakness is showing up first and hardest.

And domestic US demand isn’t exactly picking up any slack. Overall New Orders, according to the ISM, was 47.3 last month while the production index dropped 2.2 points to the same level. These are also decade lows. 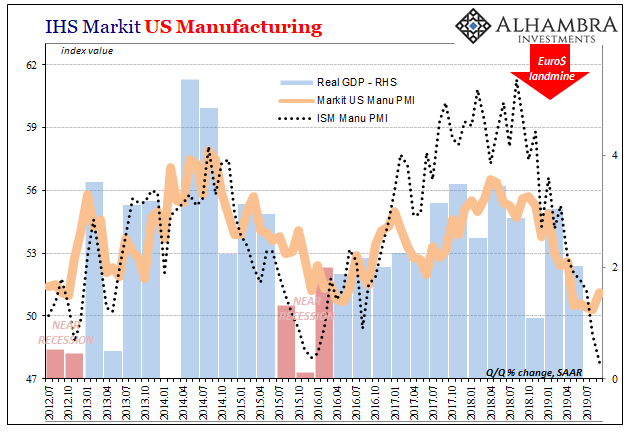 While IHS Markit’s competing view of manufacturing rebounded in its updated publication, up to 51.1, it was in its previous month’s reading the lowest since 2009. In other words, the timing isn’t exactly the same and there are statistical noises in between them, but both Markit and the ISM are suggesting domestic manufacturing is or is near its worst state since the Great “Recession.”

Even though the yield on the UST 10-year is substantially below carry costs as well as monetary alternatives like the reworked RRP, it doesn’t seem to be having much trouble attracting buying interest. Negative carry, it seems, is quite alive and well unfortunately for everyone, not just bond bears.

Flight to safety is pretty broadly accepted. Flight to liquidity much less so, but it’s not really that difficult of a conception once you realize the structural issues that remain (the zoo). There is a liquidity utility to sovereign bonds as collateral (and not just in repo), and therefore financial agents are willing to pay a premium, a liquidity premium, to own them during times of turmoil.

The more obvious the turmoil, the more valuable that utility. As I wrote, and diagrammed, last month:

Sovereign bonds as “pristine” repo collateral (what some Economists have called information insensitive securities not subject to adverse selection processes) are not investments. They may be to you and me, but they are little more than ballast or balance sheet tools to the financial institutions holding and using them.

We are repeatedly told how there is supposedly no liquidity risk not with Jay Powell’s determined group watching over things. But then two weeks ago it blew up in their face on little more than a seasonal low point.

They keep saying the economy is otherwise fine and that it will get back on its feet in the second half. Yet, it is already through September, halfway through that second half, and the numbers keep dropping and for what are more leading indicators.

Who will buy, actually keep buying, all the sovereign bonds?

No central bank buying, no problem – because the real problems just won’t go away. In fact, they continue to grow, expand, and proliferate. Maybe it wouldn’t be this way if central bankers would stop trying to use yield curves to send fanciful messages to the public and for once start listening to the real and useful information the curves have been conveying all along.