Maybe it was a sign of things to come, a warning how it wasn’t going to go as planned. Then again, when it comes to something like quantitative easing there really is no plan. Other than to make it sound like there is one, that’s really the whole idea. Not what it really is and what it actually does, to make it appear like there’s substance to it.

After experimenting with NIRP for the first time and then adding a bunch of sterilized asset purchases in 2014, Europe’s central bank was getting nowhere. Over the inflationary objections of the confused Germans, who like early critics of the Fed’s QE somehow still believed this was money printing or even “easing”, Mario Draghi in late January 2015 announced the gloves were finally off.

Europe’s central bank would go all in. Real balance sheet expansion this time, no more half or partial measures. The Public Sector Purchase Program (PSPP) would greatly increase the level of euro bank reserves. The media would definitely call it money printing. And hopefully the public would see it that way, too, and act in accordance.

That was the sum total of their plan.

In the bond market, though, yields, especially safety yields like those on Germany’s federal securities, had been falling. No matter what the ECB had done, the relentless drop in interest rates continued. The market wasn’t seeing any inflation however officials wanted to characterize their efforts.

Until Bill Gross tweeted. Three months after QE had been announced and six weeks after the program’s first effective purchases, the widely proclaimed “bond king” said German bunds would be the “short of a lifetime.” QE, in effect, wouldn’t just work it might work only too well.

Gross: German 10yr Bunds = The short of a lifetime. Better than the pound in 1993. Only question is Timing / ECB QE 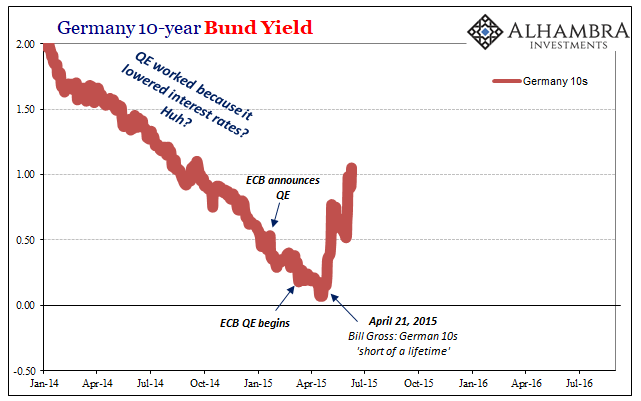 The result was immediate; for reasons that today look even stupider, the bond market took the bond king as if the honorific was unironic. Germany’s 10-year bund plummeted in price making it, for a time, seem like Gross might be on to something. Between April 21, 2015, and June 10, 2015, the yield spiked, rising from a then-record low of 7 bps to as much as 105 bps.

But, obviously, it didn’t last very long. In early January 2016, with Euro$ #3 raging across the planet, yields fell back again even though Mario Draghi upped the pace of “printing.” By June 2016, bunds were back to new record lows and had even turned negative. 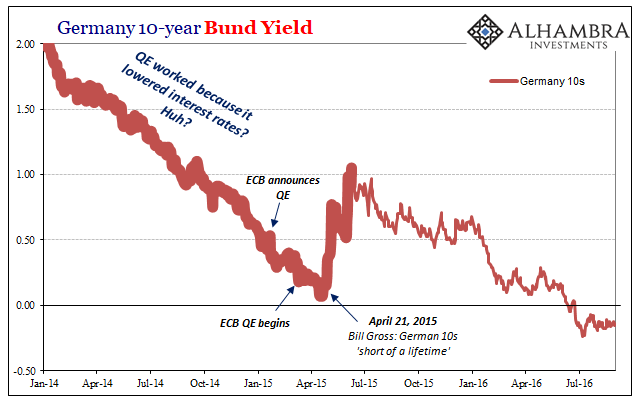 Strong worldwide demand for safe assets, for liquidity purposes, no less, simply overwhelmed the appearance of “money printing.” To emphasize the scare quotes, no inflation ever showed up, either. Central banks are not central.

Despite thinking that it was all just a misunderstanding, a simple matter of time, Mario Draghi and his QE-adherents decided that “globally synchronized growth” in 2017 was the belated response to his courage and genius. Sure, it didn’t happen right away, he said later, but it started to happen.

Believing that right on into the middle of 2019, the ECB ended that prior QE in December 2018 and then watched how one after another things went from not really good to bad to now worse. The market began betting on renewed QE and the resumed appearance of “money printing” months before central bankers ever admitted they were thinking about it.

The big problem with QE, other than the fact that it isn’t money printing or even monetary accommodation, is that it has been empirically tested repeatedly all over the world. It doesn’t work in any sense. Ever. In 2015 in the bund market it took a Bill Gross tweet in order for it to be taken seriously as possibly, maybe something.

Back then, people thought Bill Gross not the ECB might know something.

With Europe mired in increasingly what looks like a full-scale recession, the ECB announced on September 12 that it was restarting the PSPP. The deposit rate “floor”, already breached by several Euribor rates, would be reduced further, from -40 bps to -50 bps starting on September 18. There would be tiered penalties where that floor would apply. A whole bunch of hand waving the financial press could write about.

But without Bill Gross to tweet anything pithy, the market reaction was at best a quick whimper. Barely a move. And what little the market did move, it’s been rescinded in a matter of weeks. 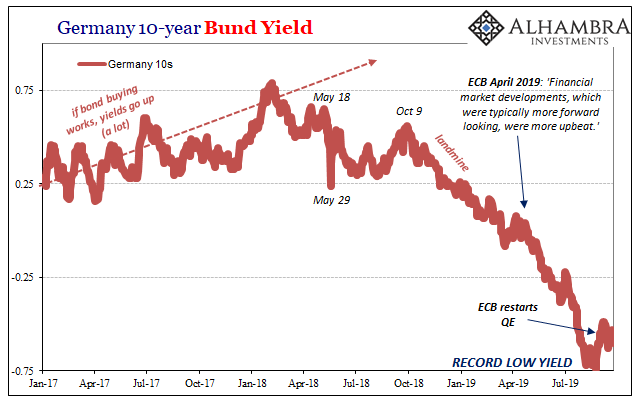 If restarted QE was going to have a positive effect – getting the public to believe it is money printing because the financial media refuses to call it what it is – it would show up here. And, in fact, Europe’s central bankers are counting on it to show up as it did at least a little bit in 2015.

Instead, as Bloomberg reported on Thursday, the 5y5y inflation swap has fallen to new record lows in early October. Not even a month into the next QE, the market isn’t being fooled. 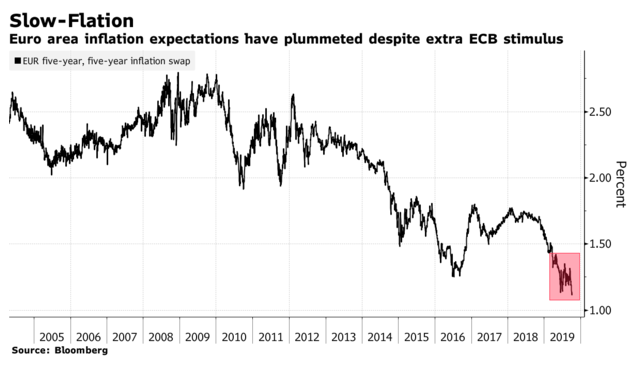 What that says is pretty simple – no matter what the ECB has done, or likely will do, the bond market in Europe believes that there is a much greater risk of Japanification than any other potential scenario. The very idea of inflation is absurd no matter how many bonds are bought, how negative the non-floor floor, or what other popular comics and actors authorities will add to their unending puppet show.

It’s not just that there could be, maybe will be a recession in the future. It’s much worse than that. The entire bond market is thinking the effects of another recession without having yet recovered from the previous two will be devastating to the long run trajectory of the European economy. 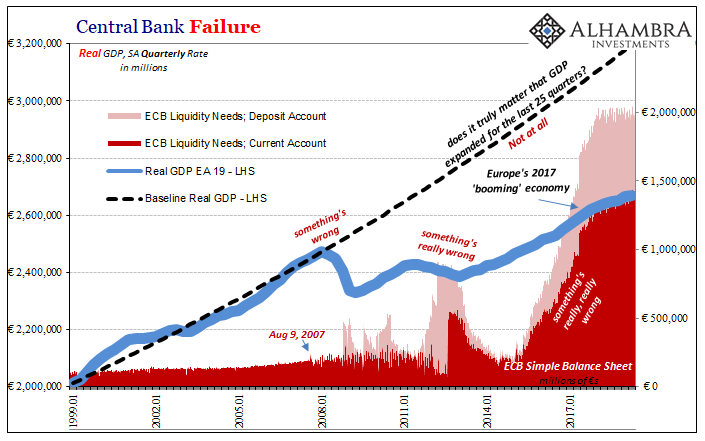 In other words, what little good QE may have accomplished was only to empirically establish how policymakers really are powerless. At this point, it wouldn’t help if Mario Draghi dragged the bond king out of (I’m sure voluntary) retirement and put him on the payroll to tweet again. Like QE, Bill Gross has also discredited himself.

None of this crap works. It’s absurd theater and nothing more. It never was anything more and we are all paying the price because there is no money in monetary policy. The bond market knows it. What should really grab your attention is that the bond market also knows this isn’t just about Europe.