Humans Long On Novembers, A World Short On Dollars, US Retail Sales Suggest A Move Into That Second Half

Humans Long On Novembers, A World Short On Dollars, US Retail Sales Suggest A Move Into That Second Half

The year 2015 started out very rough. While the mainstream tried very hard to make the oil crash into a supply glut and Janet Yellen kept referring to the “best jobs market in decades” as if it that specific combination of words was some sort of incantation, the early months of that year represented a serious stumble. But almost as quickly as that mess arrived it seemed to have disappeared. Replaced by “green shoots” by spring, the word “transitory” showed up as did the two words “overseas turmoil.”

January and February 2015 in particular had been transitory overseas turmoil. The US safely decoupled, so they said.

But then in August 2015, seemingly out of nowhere CNY plummeted. Again confused, the mainstream media filled with stories about export stimulus. Damn cheating Chinese. Except, two weeks after the yuan crashed Wall Street did. All of a sudden, not just China, not just currency, and perhaps no longer transitory (outside of Yellen’s narrow vocabulary).

What followed the events of that particularly peculiar August was a clearer and more robust breakout of the growing global dollar shortage, the real culprit. Unsurprisingly, the US and much of the global economy simply followed along. In American economic accounts like retail sales, problems early on, a better middle, and then the hammer dropped toward the end. 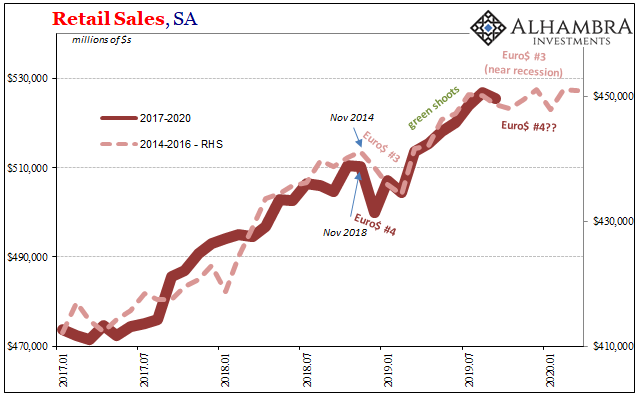 It is a pattern that repeats – a little too exactly to be anything other than legitimate. We have been made to think of our hyper-modern world as a product of randomness. The idea that there might be calendar points embedded within deeply complex systems seems almost incompatible with how we think about the state of the world.

Yet, here we can observe the same said pattern repeating; and not just in one instance, but four times. It happens the same way, or very nearly the same way, in each.

That’s a commonality linked by cause as well as something deeper. There is a calendar or seasonal aspect to these global dollar shortages. And it works out the same way in economic conditions.

In Euro$ #3, the oil crash announced the monetary problem had become serious. From November 2014 until February or March 2015, the global economy was pressured and markets responded in that same way. A pause in the middle and then by August 2015 it was is if the whole thing just picked back up where it left off. Unexpectedly, of course.

In Euro$ #4, the landmine announced it had become serious. From November 2018 until February or March 2019, the global economy was pressured and markets responded in the same way. A pause in the middle and then suddenly in September 2019 another calendar point showed up to remind everyone of that same underlying problem. For the economy, a prospective raise in uncertainty.

Like Euro$ #3, retail sales during this Euro$ #4 have followed the template. According to the Census Bureau’s updated estimates for September 2019, seasonally-adjusted retail sales declined just as the public perhaps for the first time since 2008 heard something serious in the word “repo.”

Obviously, one month of US retail sales doesn’t tell us much about the state of the whole global economy. What’s intriguing is more so what it might represent if this same pattern plays out (and today’s repo market is doing the optimists no favors, as Jay Powell sets out to strip that same market of T-bill collateral just when it seems to be needed the most).

The initial dollar shortage is the announcement, the first part. The real damage in terms of economy comes out of the second part. Past the green shoots in the middle, that later dollar dump might be when economic participants become convinced of risks. They are perceived in the first part – you almost have to be blind (sometimes intentionally) not to see them. When they return in the second part, though, that’s when there is no doubt.

Look at the Euro$ “cycle” before #3. During Euro #2, the placement of these pivot points on the calendar doesn’t exactly match but the seasons do. Whereas there was an economic peak in November 2014 and November 2018, in this second instance it all turns on March 2012. 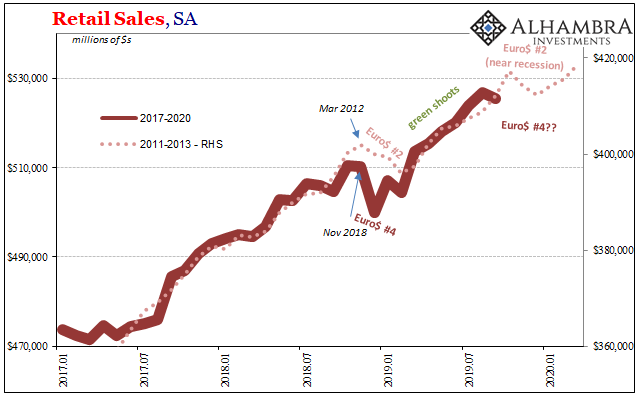 Beyond that initial stumble, again using retail sales as a proxy, and then after a few months (and a few global central banker promises) of green shoot summer by Autumn 2012 more deterioration (and more QE). A near recession hits later in 2012 and into the first quarter of 2013. 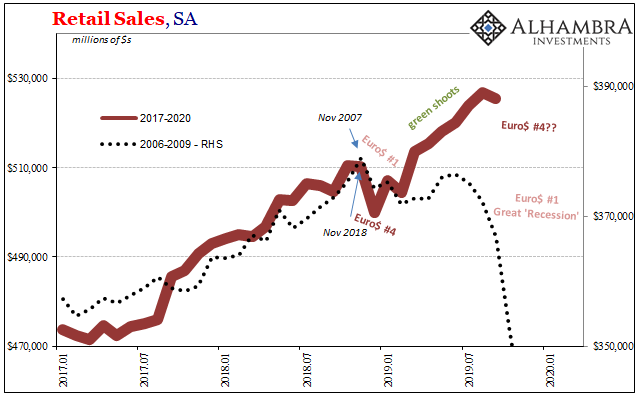 The economy would stumble in early 2008 (as the recession “officially” began in December 2007) and after the Fed got the media to back its story that it had steered the economy out of the worst (Bear Stearns) there were several months of optimism and economic acceleration. Even some serious reflation in the bond market.

Those green shoots, however, didn’t turn out to be very green at all but still the pattern repeated. Early problems, better middle filling many with relief and even some cautious optimism. It wasn’t until the Fall of 2008 when the real economic damage registered, when the dollar shortage “somehow” and always “unexpectedly” escalated.

The second part of that dollar shortage “cycle” was where it really counted. It’s where it always counts.

Was last month’s repo rumble enough of a reminder to enough of the global monetary system that there really is a serious problem? On its own, that’s all CNY in August 2015 had been. The currency drop itself wasn’t much of an issue, it was what it signaled and demonstrated about how things were going out there in the shadows.

Will repo like CNY mean a substantial enough increase in economic uncertainty?

It is too early to say. All the Census Bureau’s update reminds us is that the economy is already in a critical state with regard to uncertainty and weakness. That’s the predicate for the more serious second half of each “cycle.” The first part knocks the global system down enough so that it is no longer really growth. And then after some time in the middle, the second part comes along and that’s when the havoc is really wreaked.

US retail sales continue to grow at very weak rates, close to that recessionary 3% line. For September, the year-over-year (unadjusted) change was just 3.8%. Take out autos and it was 3.5%. 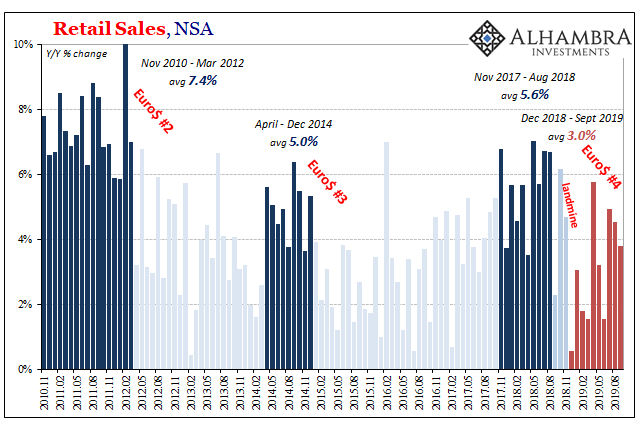 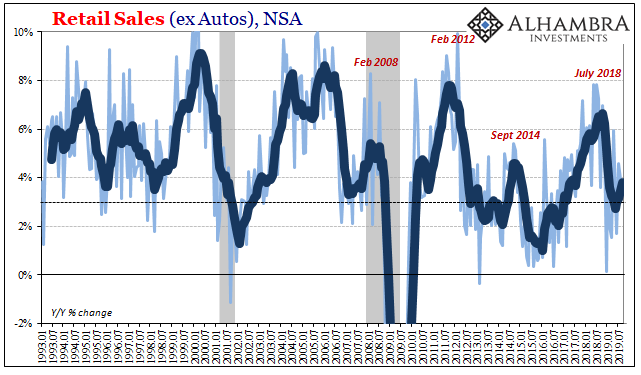 In other words, the economy is and has been in that predicate position.

These eurodollar squeezes follow what appears to be a prewritten script, or a set timer. They don’t really, just that the innate therefore predictable human qualities underlying the dizzying modern complexity has a way of breaking through to the surface under these kinds of pressures. What that means, and what all the economic and market data says, is that if Euro$ #4 is still ongoing, and it seems to be, we are now getting into the time when we’ll find out what it really means.

Maybe this time will be different. Perhaps Jay Powell is right and the economy really is strong. Then again, though the September 2019 retail sales decline is small and is just one month, it is one monthly stumble that’s right on schedule.