The Dollar-driven Cage Match: Xi vs Li in China With Nowhere Else To Go

The Dollar-driven Cage Match: Xi vs Li in China With Nowhere Else To Go

China’s growing troubles go way back long before trade wars ever showed up. It was Euro$ #2 that set this course in motion, and then Euro$ #3 which proved the country’s helplessness. It proved it not just to anyone willing to honestly evaluate the situation, it also established the danger to one key faction of Chinese officials.

The entire world slowed in 2012 following #2, but until the bottom of #3 it wasn’t really clear what that might mean. For a very long time, especially with Western officials and Economists, it was believed that full global recovery was just a matter of time.

That’s all “stimulus” aims to accomplish. Its stated purpose is to buy enough time by softening the blow from downward cyclical forces. That way those negative pressures never become anything more than the usual nature of the business cycle. So a contraction doesn’t get transformed into a permanent change in condition and potential.

It’s just what the Chinese had done starting in late 2008 once it became clear that the rest of the world wouldn’t actually decouple from the US subprime mortgage mess. The only reason anyone thought that it might was because they misidentified the spreading, contagious global dollar shortage as entirely to do with greedy Wall Street bankers fudging mortgage paperwork – itself a symptom of the rapid monetary growth preceding the crisis.

The textbook Keynesian approach is government spending coupled with central bank easing. The bigger the contraction, the more government spending in order to fill in the deepening trough of “aggregate demand.” Beijing has more than enough copies of Dr. Keynes’ textbooks lying around to describe the orthodox approach.

Initially, it seemed effective. Authorities really ramped up fiscal spending via State-owned entities. Regardless of profit or waste, Fixed Asset Investment skyrocketed through this channel. The economy initially recovered; or it appeared to.

After the second half of 2011, though, Euro$ #2, it became more of a running battle to try and keep China from going too far off track and really to understand why. The stakes were not just economic opportunity, as I wrote elsewhere today. Everything in China is at stake here, top to bottom.

Rapid, sustained growth had always been the payoff, the people’s part of the deal going all the way back to Jiang Zemin and even before. Jiang’s Three Represents combined economic growth with hardened Chinese cultural characteristics in order to reach a future where “the fundamental interests of the majority” would be reflected in all things, including, one might imagine, the politburo.

The Chinese people have put up with a lot, and the reason they have is just that simple. If they stay quiet and wait their turn, their children get rewarded with a comfortable, middle class Western lifestyle in one of these glittering new modern cities. But only so long as the economic “miracle” keeps going. 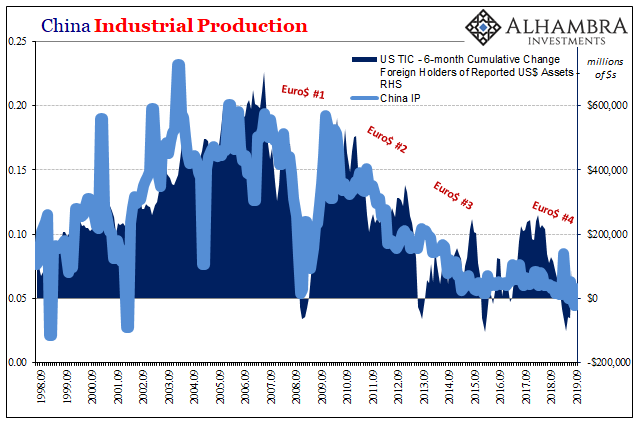 It was never accounted for how that miracle wasn’t all that miraculous; it was bought and paid for by an equally rapid advance in global eurodollars. Take away the “dollars” and the growth suddenly disappears. But that’s not in the textbooks.

In the aftermath of Euro$ #2, it seems as if some of China’s governing Communists while maybe not completely sure of why had begun to realize this wasn’t a temporary deviation in economic course. When Euro$ #3 showed up, that theory was put to the test.

On the one side, Li Keqiang who was and remains China’s number two. As its premier Premier, that post typically places the economic portfolio in his hands. Li is a Western-style Economist, in favor of the textbook approach to both analysis and in advising the standard solutions.

In early 2016, with Euro$ #3 really bearing down on China’s economy, Li was “allowed” his fiscal panic.

Curiously enough, it doesn’t appear as if President Xi Jinping, the Chinese number one, saw things Li’s way. The weird article that in May 2016 appeared out of nowhere in the People’s Daily criticizing the “stimulus” could only have been written and published with Xi’s approval.

In a lot of ways, that’s just what China’s 2016 stimulus panic allowed him to achieve. As the May 2016 article in the People’s Daily said, Xi’s side wasn’t at all convinced it would be effective. In a lot of ways, it sounded like a prediction intended to be date stamped and referred to again for a future “I told you it wouldn’t work.”

Though I doubt he truly understands why, Xi’s criticism (voiced by whomever, probably Liu He) proved to be well-founded. Li’s “stimulus” didn’t amount to very much, nowhere near what was expected (especially by Western central bankers eager to hype anything positive into “globally synchronized growth”). Euro$ #3 had proved even the mighty Chinese juggernaut was just living in the eurodollar’s world, stimulus be damned.

As 2017 dragged forward, China only slowed from its minor sugar high. Xi began to remove economic responsibility from Li and by October of that year proclaimed the grand shift in strategy. At the 19th Party Congress, the newly made Emperor Xi proclaimed how China would no longer pursue growth as it once had under Jiang’s Three Represents. The country would instead commit to “quality” growth.

Which meant a world without any growth.

That’s a very different proposition and one that is increasingly dangerous on and to all sides. As a consequence, Xi has further consolidated power, Li relegated to ceremonial duties, and no one really sure how this will all play out across the many divisions and contradictions inside of what may appear to the outside a harmonious, undivided polity.

And that’s why Xi isn’t taking any chances, tightening his grip on the Party as well as the country. The side of reform and liberalization, Li, the side maybe we “want” to prevail is playing from the standard Economics textbook and therefore doesn’t know how. The side of reactionary tendencies, the one that seems hellbent on taking China backward toward Mao’s terrible reign, Xi, is the side that far better understands the country’s predicament.

The entire regime is stuck and so officials are unsure what to do moving forward – because there is no realistic way for them to move forward. On the one hand, the reactionary who is reacting rationally to years of empirical evidence where global money and the economy is concerned in order to take China back. On the other, the Western-style academics committed to reform and liberalization by doing more of the things that haven’t, and won’t, work.

And the key to it all in one aspect is such a simple thing yet nobody appreciates or even recognizes just what it is that has killed off the world’s potential and disrupted, perhaps permanently, the stable plans and expectations of the past.

The latest data out from China continues to add more fuel to Xi’s side. There is no way to get back to 2007 so long as things remain as they are. Stimulus is pointless because it doesn’t work; these global dollar shortages are too much anti-stimulus for even the biggest fiscal panics.

Globally synchronized growth, based in large part on Li’s stimulus gamble paying off, never made it out the first quarter of 2017. It was dead-on-arrival. 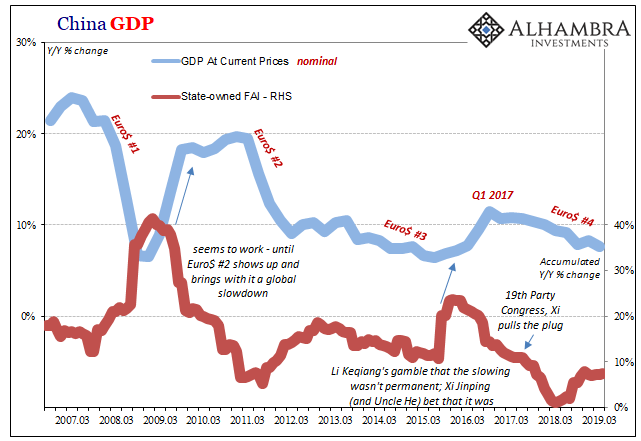 No wonder the bond market never bought the hype; no wonder the bond market is so pessimistic about the future. Not only does it agree with Xi’s position on where things really stand today, it is equally if not more concerned about what Xi might do with that knowledge more and more unfettered by any real internal opposition. Especially knowing, as he clearly does, there isn’t much he or China can do about it – at least not in the economy.

China’s NBS reported another low in real GDP growth, while at the same time the usual monthly noise in Industrial Production as well as Retail Sales. The average of the former, IP, in September 2019 fell to the lowest on record while the average of the latter is only a touch above its own record low. 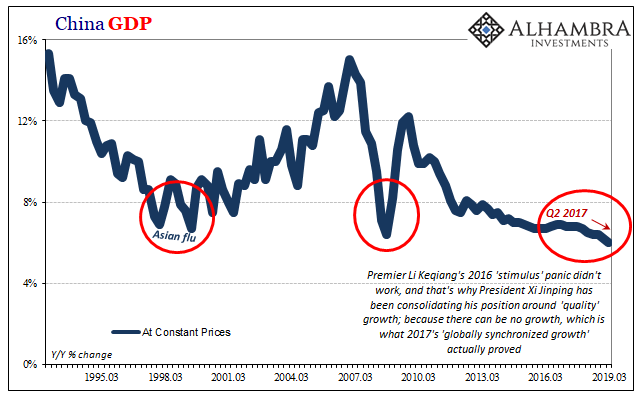 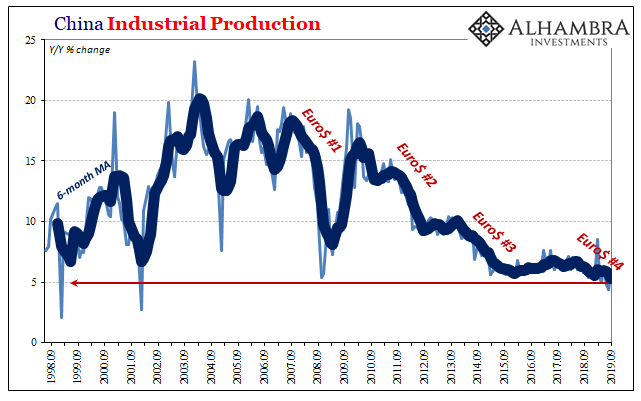 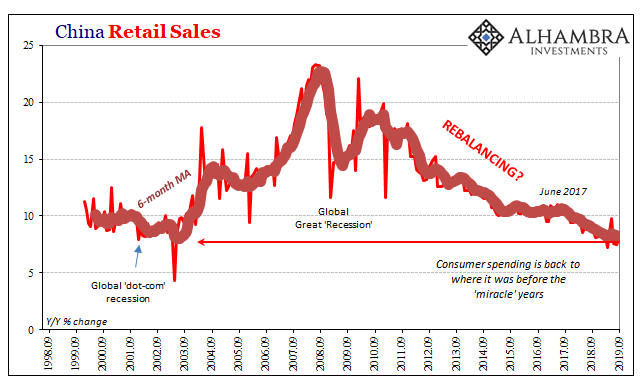 With this slowdown more deeply engrained, FAI growth continues to slow with it. It was monetary-fueled FAI which propelled China out of its agrarian roots and into becoming a modern powerhouse. And now private FAI is back near its own record lows of 2016. As a result, overall FAI (accumulated growth) is just 0.1% above…a record low. 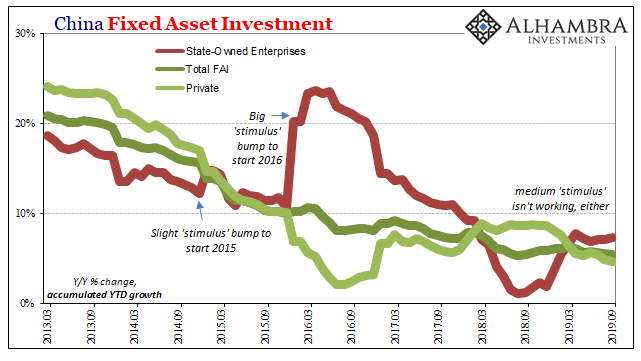 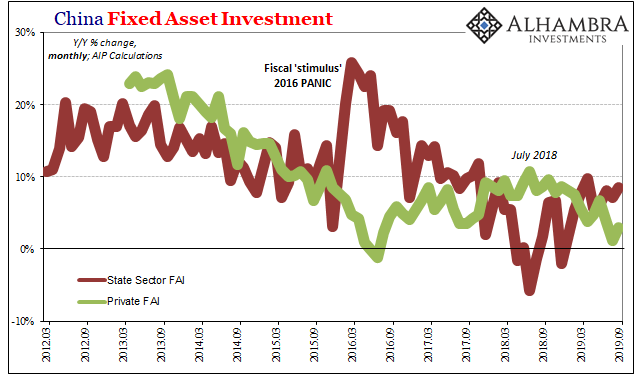 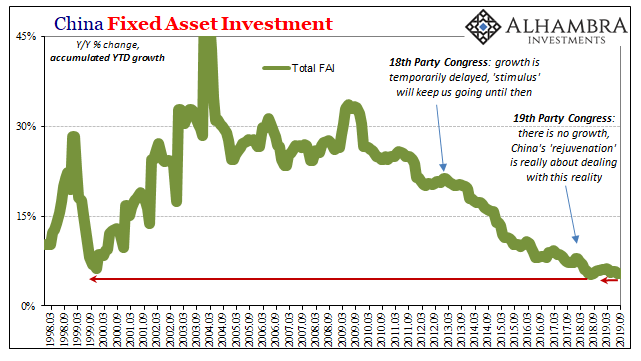 In short, China is a danger to the global economy on many fronts. Financially, all the debt built up from those failed stimulus attempts places an enormous burden on especially Chinese business sector, fostering ever-spiraling worries and fears over credit and liquidity risks. The dollar system will only react negatively to those risks, and therefore continue to negatively affect the whole game.

And on top of all that, Xi Jinping’s position grows more precarious by the quarter, by the month. It is very likely why so many hyper-reactions to the smallest not even provocations – the NBA, Winnie the Pooh, and the beginnings of the Hong Kong protests. The Communists doth protest a little too much lately.

China has become a gross geopolitical risk because it can no longer achieve growth. It can no longer grow because the world, as seen in repo lately, simply doesn’t have the dollars to be able to. Until that changes, this is where we are. And where we are is probably the best case.

As I wrote in closing:

If only someone there or at a central bank somewhere would attempt to figure out why. US$ repo would only be the start.