Weekend’s PMI Joy Was Spoiled Before It Ever Got Started

Weekend’s PMI Joy Was Spoiled Before It Ever Got Started

The weekend began with pure joy over PMI’s before it ended in deep disappointment early Monday…over a PMI.

It started in China. That country’s National Bureau of Statistics (NBS) released its November 2019 numbers for manufacturing and non-manufacturing sentiment. According to the government’s calculations, the gauge for manufacturing ticked back above 50 last month for the first time since April. At 50.2, that was up from 49.3 in October. 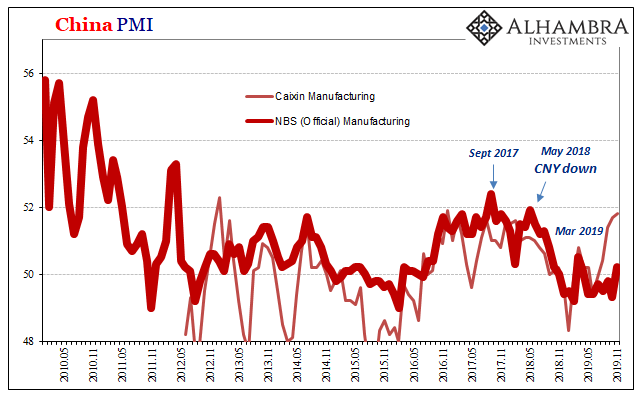 Assuming that this better-than-expected rebound is the start of something, forgetting how it is inconsistent with other more basic forward-leaning indications in China, it didn’t take long for the financial media to plant its recovery flag in the ground and run with that story.

The problem, as usual, is how there’s never any account for month-to-month or even multi-month noise in these things. It was back in March the last time everyone went through the same exercise in futility. For Chinese manufacturing sentiment, that meant its contributions to worldwide “green shoots” which at the time were reported in the same emphatically glowing terms.

The world is only supposed to pay attention to the good months, never the increasingly more numerous bad ones.

At the end of 2018, the NBS index had “unexpectedly” dropped below 50 before rebounding into what seemed to confirm the mainstream interpretation – whatever might’ve happened at the end of last year it was surely going to be short-lived. Such “transitory” factors wouldn’t impede the global recovery too much, meaning globally synchronized growth would be restored and the inflationary breakout to resume.

For Chinese sentiment, the NBS calculated that manufacturing leaped from the low of 49.4 last December (only 49.5 for January 2019) to as much as 50.5 by March.

The relief over manufacturing became near-euphoria when simultaneously China’s NBS reported a similar rebound on the non-manufacturing side of its economy. The services PMI, largely services, had dropped to 53.4 last November. By March, it was back all the way up to 54.8. 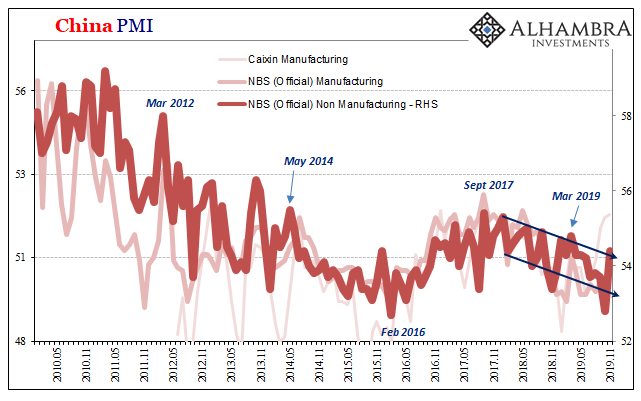 Those “green shoots” weren’t green shoots, however. It was merely the truth of noisy data – nothing goes in a straight line. They were quickly forgotten and replaced by new concerns which flooded perceptions during the middle of the year, reflected in both PMI’s dropping to more lows by late summer.

But with the manufacturing PMI back above 50 now and the non-manufacturing one moving up to 54.4 last month, the highest since, well, March, history seems to be repeating yet one more time. Since we are closing in on winter, they won’t be termed “green shoots” but the effect and most likely outcome is much the same (especially considering potential midpoints).

This weekend’s jubilation ended up being spoiled by the ISM’s Manufacturing index (I’ll get to that later), a sentiment measure for conditions in the US side of the goods economy. While it was a good enough reminder about the uncertain nature of these things, especially taken individually, the truth is the party never should have been started in the first place.

A few days before China’s NBS reported, Japan’s Ministry of Economy, Trade, and Industry had already spoiled the fun. Pre-spoiled, I guess. By releasing startling statistics on Industrial Production in Japan, that country’s government probably should have been given preference in how the markets worldwide tried to analyze and interpret which way the global economy may be leaning lately.

Japan IP is the best indicator for answering Euro$ yes or no. I even said as much last year well before China’s PMI’s had ever picked up on the effects of the tightening global monetary squeeze:

The positives are far fewer than the negatives. They correspond easily with these obvious “reflation” episodes we find all over the world created by the abatement of destructive eurodollar impulses unleashed in intermittent fashion (nothing goes in a straight line).

That was early April 2018 – before the collateral quake of May 29 and even several weeks before the dollar would erupt higher. None of those were actually “unexpected”, Japanese Industrial Production was a warning that, not due to trade wars, conditions across the global economy only beginning in trade and manufacturing had probably already shifted back to the downside.

So, while China’s NBS released noisy PMI data on Saturday that typically ends up following, Japan on Thursday had said IP collapsed by more than 7% year-over-year in October 2019. It was the latter’s largest decline since 2013, lowering the 6-month average to nearly -3% which is also the worst in that many years. 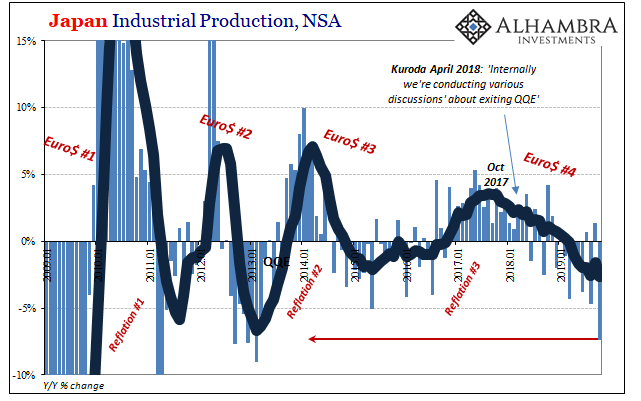 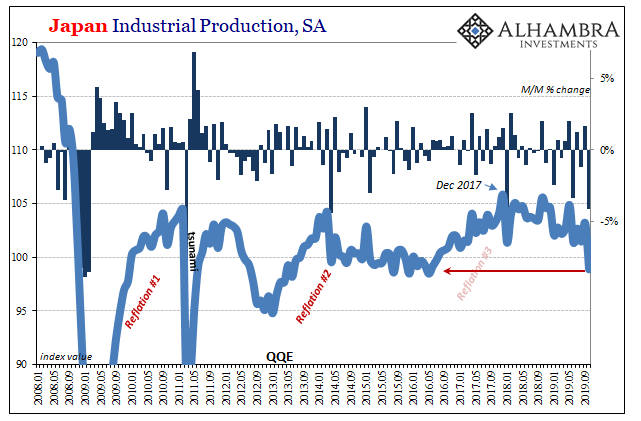 In seasonally-adjusted numbers, Japanese IP has now reversed all of Reflation #3 (globally synchronized growth), barely equal to the lowest point of Euro$ #3 in 2016.

That’s obviously a much different view of the global economy’s current inclination.

Economists were quick to point to Typhoon Hagibis as their preferred explanation for the shocking declines, but even they had to acknowledge there was far more underlying weakness than otherwise believed factoring the storm’s potential downside effects. One Economist, Yoshiki Shinke, chief economist at Dai-ichi Life Research Institute, noted:

We must be ready for a big contraction this quarter. It won’t be a surprise if growth is worse than the market consensus.

Our basic view is that Japan’s growth would slow as a result of weakening external demand pressuring exports. This is playing out, but the trajectory is a little weaker than anticipated. All this adds up to a greater need for fiscal support, given the Bank of Japan’s hands look mostly tied.

Yes, more “stimulus.” It never ends because neither the Japanese nor the “external” economy ever truly recovers. There’s only ever reflation and Euro$ #’s. And it’s Japan’s IP which historically hast best sorted one from the other.

Sure, China’s PMI’s have pushed higher in a very familiar way but Japan’s IP has sunk lower. A lot lower. It should never have been left to the ISM to ruin everyone’s fun.