You can see the pattern, a weathervane of sorts in its own right. Not for how the economy is actually going, mind you, more along the lines of how it is being perceived from the high-level perspective. The green light for “trade wars” in the first place was what Janet Yellen and Jay Powell had said about the economy.

Because it was strong and accelerating, they said, the Trump administration gambled that such robust growth would insulate the US system from any fallout. Flush with confidence inspired in large part by Powell, the President took aim at China.

As it began to go wrong, the economy, Trump would begin to complain about…Powell. A few rate hikes supposedly derailed the greatest boom in generations? I don’t think anyone actually believed that, even those like Larry Kudlow preaching to the mainstream choir.

Instead, it seems more likely officials in the government were keen on cajoling officials at the Fed to reduce rates in order to gain a little more economic room to maneuver as the overall trend “unexpectedly” soured. That much worked.

But it went too far; “it” being the swift onrush of globally synchronized downturn. The rhetoric began to change, the once-hardline approach with China softening substantially especially once the 2s10s inverted. Everyone was alarmed, so “trade wars” became “trade deals.”

Now, as the “recession scare” fades in the minds of these same people, guess what? Back to the hardline approach all over again. The economy, they think, really might be strong enough for it to come out on top.

And that will change if things continue to go as they really are – which is more like a eurodollar midpoint than a meaningfully positive pivot. Powell says there is economic strength underlying and by this renewed push in the “trade wars” it seems the administration agrees. Back together on the same page.

They got the downside all wrong, but now they’ve pinpointed the exact upside?

Underneath it all nothing has really changed. The 2s10s may not be inverted, but that’s just how the curve shifts as these things unfold. Again, the midpoint not the endpoint.

The key is the labor market, and that really means businesses. When we look around at the most meaningful indications of how they are faring, it just doesn’t look good. Last week, we saw it in corporate profits which this week helps us explain another warning sign: the cutbacks in capex. 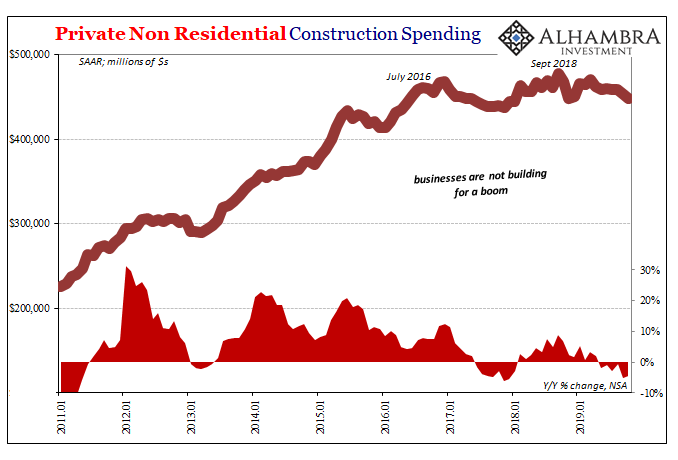 For the second time in the last three years, Private Non-residential Construction spending is on a serious decline. The first time, late 2016 to early 2017, was a warning sign that the “boom” of globally synchronized growth wasn’t real. After all, if businesses were seeing a boom, too, they certainly would’ve begun building out like one. They never did. 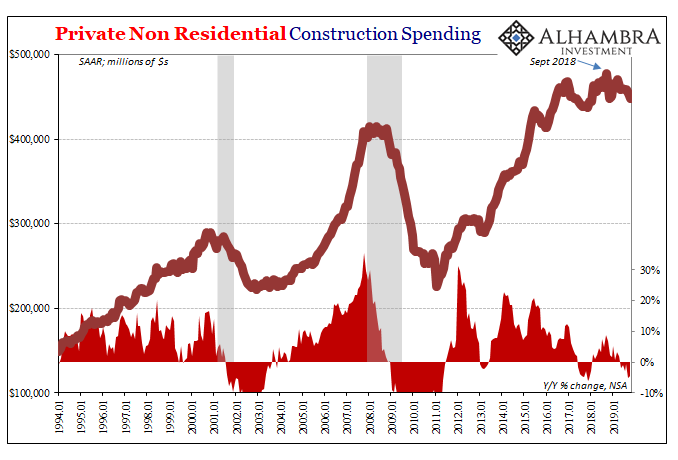 And the downside appears to be accelerating in the latest figures through October 2019. There was, like everything else, the initial decline during last year’s landmine (Oct – Dec). But then “green shoots” if only until March. Now, back downward again with what appears to be that unwelcome trend picking up its pace especially in September and October.

It matches other related data, economic accounts like the PPI which you might not readily associate with these same business intentions. I wrote back in early October:

Somewhat counterintuitively, commodity costs behave in the same manner. We think that, because we are taught that, when commodity prices rise that’s a bad sign of companies being squeezed inside their cost structure. The bottom line will surely suffer.

Not true. When commodity prices rise it is because, like wages and the labor rate, companies can easily afford to pay those higher prices. They are more concerned about maintaining growth on the top line. Material producers are able to pass along price increases only at times when their customers are able to absorb them. When there is economic growth, there is expansion all throughout. Including prices.

Companies cutting back on capex, as the construction numbers say, aren’t going to be big on input prices rising, either. And they haven’t been, as shown in the latest PPI estimates. 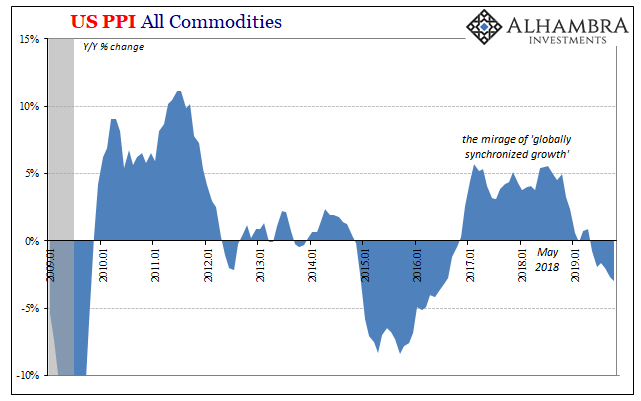 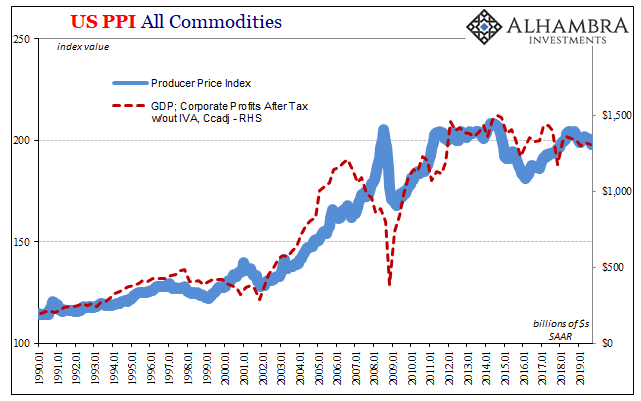 In other words, if there is some basis for “recession fears” falling behind us, it isn’t apparent in the places it should be. Instead, when we survey them (including labor and personal income data) what we find is not only more of the same but more of more of the same (second derivative). 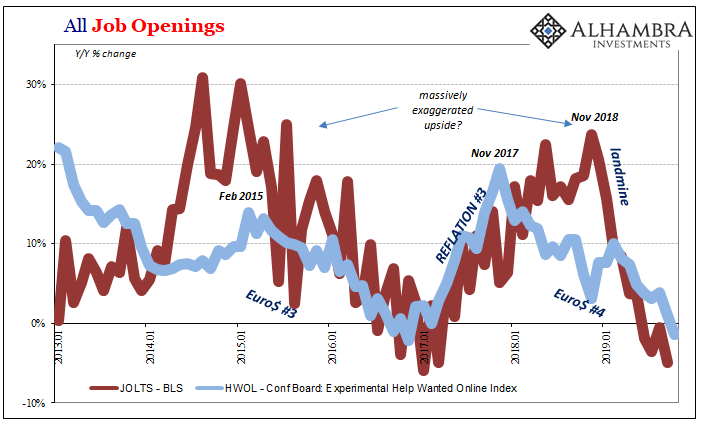 Not only still downturn, a lot that indicates one which continues to speed up. That would be consistent with a broad range of data all across the global economy, from Japan to India as well as China (recent PMIs aside), which is a much bigger factor than you might think. Even the FOMC has finally come around to recognizing the primacy of any “external” dangers:

Moreover, the staff still judged that the risks to the forecast for real GDP growth were tilted to the downside, with a corresponding skew to the upside for the unemployment rate. Important factors in that assessment were that international trade tensions and foreign economic developments seemed more likely to move in directions that could have significant negative effects on the U.S. economy than to resolve more favorably than assumed. In addition, softness in business investment and manufacturing so far this year was seen as pointing to the possibility of a more substantial slowing in economic growth than the staff projected. [emphasis added]

The exact things officials are most worried about are those which continue to happen. Maybe positions have been flipped – the Fed is more worried about the economy now than Trump?

Stocks are up and the 2s10s have un-inverted, back to “trade wars” we go – for the time being.