The BIS Misses An Opportunity To Get Consistent With The Facts

The BIS Misses An Opportunity To Get Consistent With The Facts

Much has been made about the repo market since mid-September. Much continues to be made about it. The question is why. It is now near the middle of December and repo looks dicey despite repo operations and a not-QE small-scale asset purchase intended to increase the level of bank reserves. Always the focus on “funds” which may be available.

It was John Adams who took on the task of defending several British soldiers on trial for the Boston Massacre. A wholly unpopular proposition, Adams nonetheless offered a defense of his defense during the proceedings.

I will enlarge no more on the evidence, but submit it to you, gentlemen—Facts are stubborn things; and whatever may be our wishes, our inclinations, or the dictates of our passions, they cannot alter the state of facts and evidence: nor is the law less stable than the fact.

This has been the bedrock of scientific achievement. To factually observe the state of the world in order to draw solid, replicable, reliable conclusions.

In economics (small “e”), though, what are the facts? We have available to us mountains of data, so much digital ones and zeroes that it boggles the mind. Reams of tables and an overabundance of estimates. Those, however, are not essential facts; at best, one step removed.

The facts are what markets say they are. Market-determined prices while not unassailable they are the closest thing we have to facts in finance and economy. Money has been paid and the rate written down. You can’t fool the tape. The price is the price.

Interpretation is always the hard part.

The BIS has spoiled us just recently with another addition to the mounds of data. And in its December 2019 Quarterly Review the organization takes time out to mention and analyze September’s repo troubles (pages 12-14). What you’ve heard about it before is reiterated again here; with one additional wrinkle.

What this latest Quarterly Review adds is data on the (four) largest US banks and their presumed role. The meat of the issue is, in the BIS’ view, them:

As repo rates started to increase above the IOER from mid-2018 owing to the large issuance of Treasuries, a remarkable shift took place: the US banking system as a whole, hitherto a net provider of collateral, became a net provider of funds to repo markets.

Always thorough in the data, the publication provides that and then some. To buttress their interpretation of repo, the BIS shows us several charts and graphs including this one: 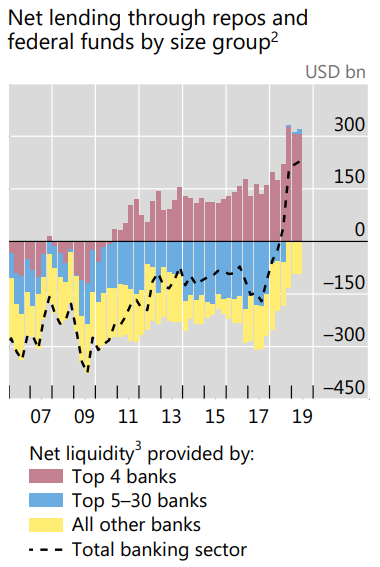 They say this is essential to understanding the problems in repo; that, starting in the middle of 2018, banks and particularly the biggest four “became a net provider of funds to repo markets.” What we are then supposed to infer is how that became a weak point, the potential source for problems. If the big four banks ever can’t lend in repo…

Thus, for the BIS this explains September. Beset by (perfectly predictable, my words) tax-time drawdowns (corporate payments) and QT reducing available bank reserves, the biggest banks sat on their hands while money market rates went haywire. The congruence of several rather unessential technical factors. Nothing, really, to see here.

If that was actually so, though, why are we, and they, still talking about repo? The central banks’ central bank doth protests a little too much.

The problems, and there are several, begin to stand out right in their data. Notice how on the chart above the dotted line for “Total Banking Sector” actually begins to shift noticeably in late 2017 (a lot of important things changed in late 2017, not that you would know it here). The text tries to focus your attention elsewhere, on only the purple big banks “from mid-2018 owing to the large issuance of Treasuries.” 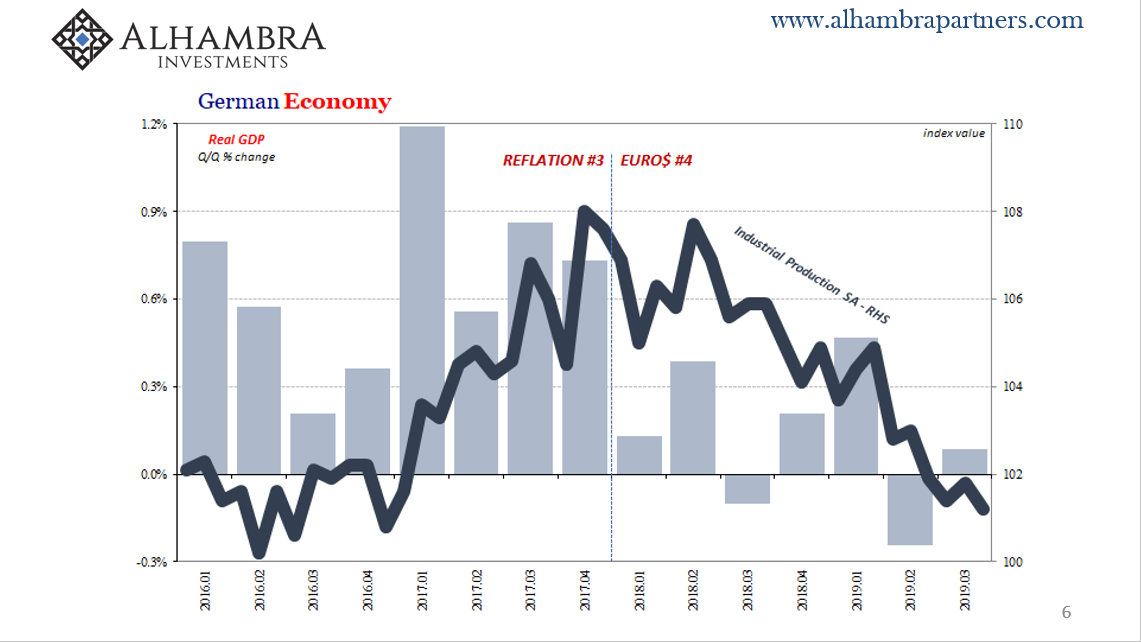 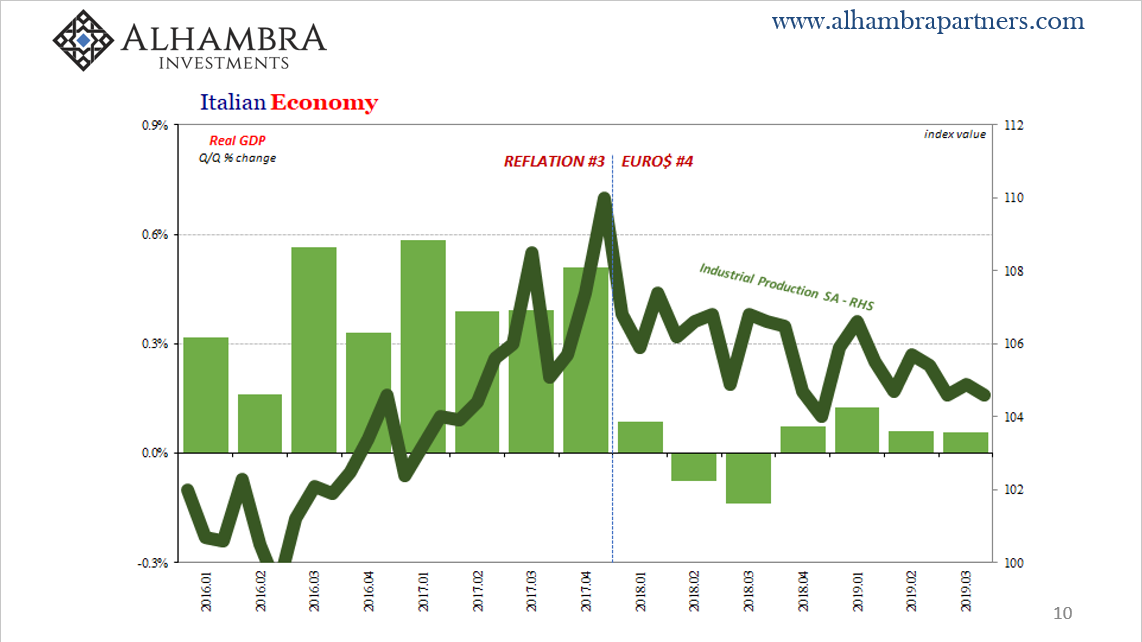 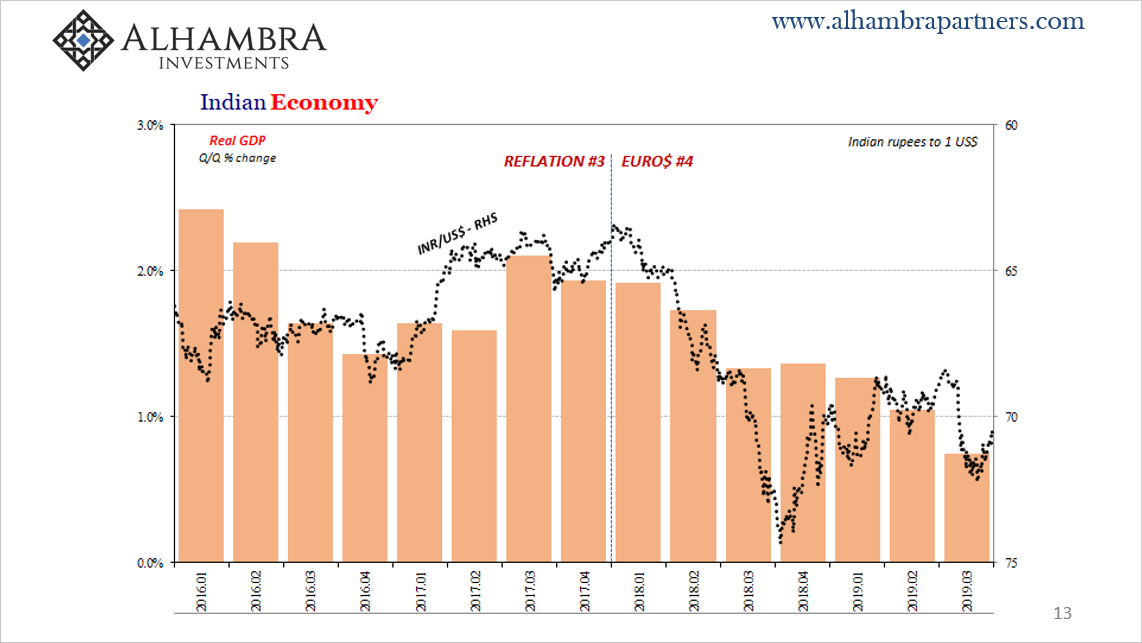 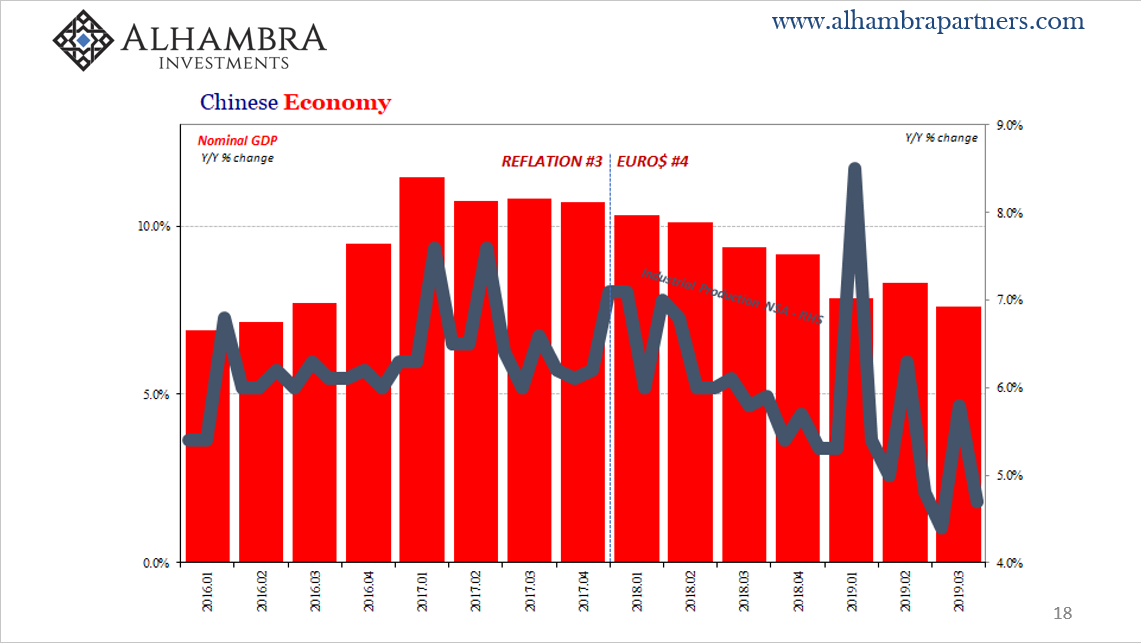 Something is already missing: the entire first half of the same year which, you may remember, was unusually, memorably eventful.

What’s missing are the facts, the market prices in bonds or the dollar. The curves. In late 2017, the UST curve, eurodollar futures curve, as well as so many others around the world flattened out – by a lot. It was a huge puzzle during inflation hysteria. Why was the bond market essentially rejecting the (BIS) program of this inflationary recovery scenario?

By the middle of 2018, even the FOMC had noticed this discrepancy – and, yes, since prices are facts here it was an enormous discrepancy. Recall how the Committee tried to discuss in order to dismiss the “strong worldwide demand for safe assets” at this same time the BIS now says the biggest banks in the US had started to become “a net provider of funds to repo markets.”

In repo, what is the other side of funds?

Go back to the full BIS quote from above, they even tell you – though it is clear they don’t, or won’t, accept the implications of it.

They never factor the monetary consequences of collateral in repo, only the “funds” side. As I wrote last week, this was one of, if not the, biggest mistakes of the 2008 Global Financial Crisis; looking at monetary conditions only through the lens of reserves rather than through the more important filter of collateral conditions.

The BIS has interpreted its data to mean the biggest US banks had become important sources of funds in repo. One can also interpret the same data to mean something else; a different take which is actually consistent with the facts. Market prices. Dollars and Treasuries (bunds, inflation expectations, interest rate swaps, eurodollar futures, etc.)

If these banks were “hitherto a net provider of collateral” but no longer are, and remember, this was around the end of 2017 not the middle of 2018, are we really just supposed to leave it at that? After all, if a very important source of available collateral (securities lending) suddenly becomes unavailable, that sounds like a more immediate point of real weakness than a dismissible non-factor that only showed up in September 2019 by technical accident.

We would reasonably expect, then, as the repo market is more and more deprived of the banking system’s collective collateral availability that that system would more and more seek out collateral on its own terms. To the point that bond prices would become and remain stubbornly high (longer rates low) in late 2017 and throughout 2018, flattening curves the world over.

The facts also tell us that something big changed on May 29, 2018. We know it was big because it shows up on every market chart. They are unequivocal on that point, too. The market prices for UST’s and more so Germany’s bunds surged. Sticks out like a sore thumb. If there was something relevant about the middle of 2018, that was it.

It was the whole market(s) telling policymakers they’ve got something very wrong – collateral, not big banks shifting toward repo funds. 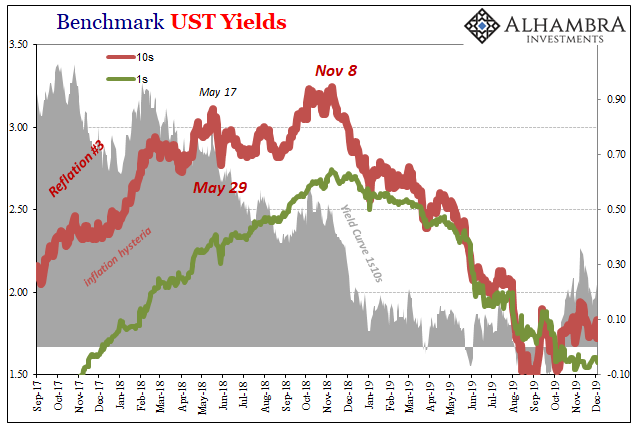 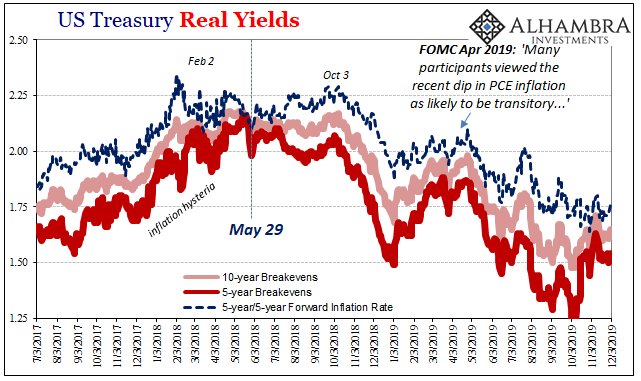 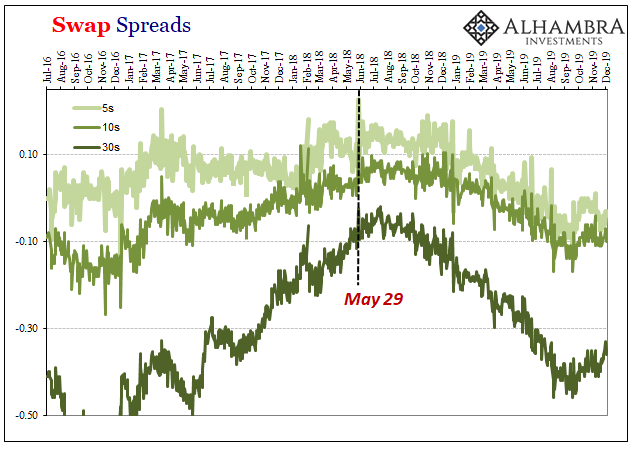 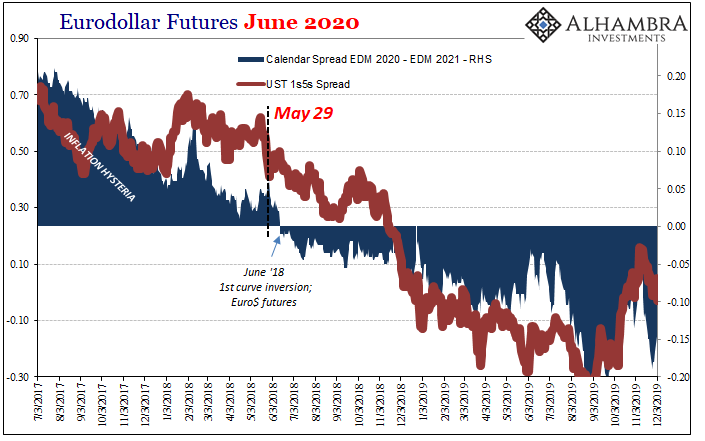 As it does the way things have unfolded ever since then. They keep trying to say that banks have been forced to hold “too many” UST’s when, by the facts, every single UST price thoroughly debunks that argument.

Strong worldwide demand for safe assets driven, in large part, by “hitherto a net provider of collateral” which becomes increasingly hostile toward doing so. Becoming necessarily “a net provider of funds to repo markets” is actually the least interesting part of the trend, the mere remainder in the process. 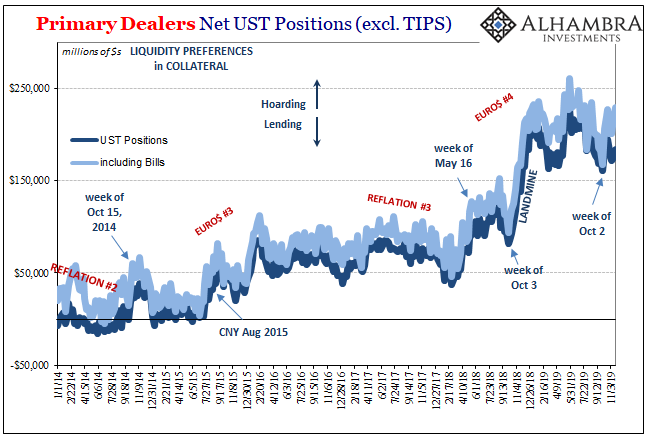 Dealer banks which understand the collateral side also know the potential for bottlenecks in it. The more that part looks uncertain, the less they are going to act in repo on either side. The net result is not only the stifling trend of a strong and sustained worldwide demand for safe assets, it’s also a repo system that has the potential to act out in unpredictable ways.

What I cannot possibly tell you is why the BIS is choosing to interpret its data in this manner, other than maybe the institutional inertia of sticking to orthodox conventional thinking, passing up a real chance to reconcile big mistakes with the factual history of the last several years. And, to be sure, its Quarterly Review actually acknowledges (at the end of the repo panel) that other things may have been going on in repo. By doing so, the authors are also telling you something important (they don’t really know what happened, they are taking a set of data and guessing):

Besides these shifts in market structure and balance sheet composition, other factors may help to explain why banks did not lend into the repo market, despite attractive profit opportunities.

The BIS tries to tackle the question, where are the dealers? Maybe there really are “hysteresis effects” and HQLA regulatory requirements (and the SLR “problem”) were impediments, but to avoid entirely any appreciation, even after writing it in the text, of negative pressures from collateral as it pertains to repo is a glaring omission and a true disservice.

Not only to you and me, more so to the facts of the last two years. Remember, interest rates had nowhere to go but up. That’s what the BIS said, too. What the facts show instead is that collateral shortage is a huge part of the global dollar shortage. Setting their interpretations aside, the BIS actually gives us more data and evidence to that end.