The way the global economy shifted from globally synchronized growth to globally synchronized downturn was specific: dollar then trade then manufacturing and industry which then spread into other areas. If the economy is to avoid moving further down that same track, then something in that chain of events must actually change.

Meaning just that: actual change in the way the numbers are pointing rather than just applying more positive words to mostly the same data.

As far as the dollar goes, not much luck there. In terms of trade, no dice, either. How about manufacturing, then?

In terms of the US economy, where industry is lagging behind the rest of the world’s trend, there has been renewed hope for revival especially in this area. Primarily due to the way Markit’s PMI’s have trended, the whole sector is being talked about as if it is on the rebound. 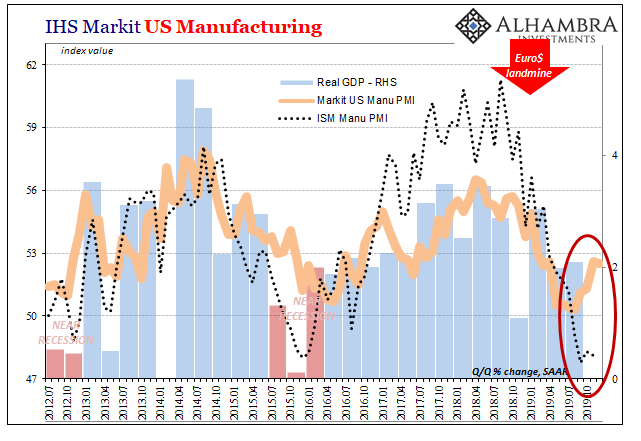 The ISM begs to differ; the last several months of figures from this alternate view at most haven’t gotten worse. What about others?

The Federal Reserve’s various branches have collected manufacturing sentiment data from among constituent manufacturers for decades. If we are looking to break the tie, so to speak, between Markit and the ISM perhaps the regional surveys can provide enough consistent evidence to do so. 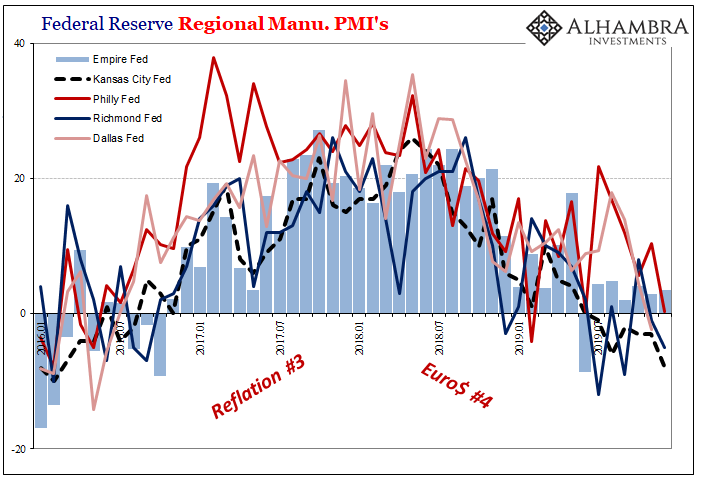 The general trend overall is clear enough, meaning that Euro$ #4 is as obvious now as Reflation #3 was during 2017. Things were on the way up into that year, stopped rising and began transitioning the following year (2018), and like the rest of the world have come back down this year (2019).

But to discern any possible inflections more recently, we’ll have to separate the surveys into like comparisons. 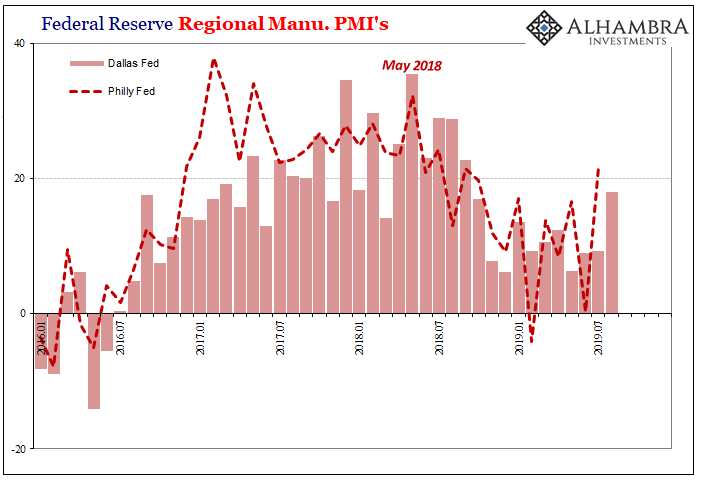 First, what were probably the best cases at least for the rebound narrative that began to appear in late summer. Both the Philly and Dallas Fed data had been rising after a rough patch toward the end of 2018 and at the beginning of 2019.

Just past midyear, however, the Philly branch had recorded a jump back to +21.8 for July. It was the highest since the previous summer. And it was up from a low of -4.1 registered during February.

For almost those same months, the Texas Manufacturing Outlook Survey followed in August 2019 with its own recent high. Coming back up from +6.2 last December and then +6.3 in May 2019, it would reach +17.9 and seemingly back on the rise.

Since then, however, both are heading right back down toward and to contraction territory. For Texas, November’s estimate was the first monthly minus since Euro$ #3, while for Philly it was only the second time at or less than zero going back to the same. 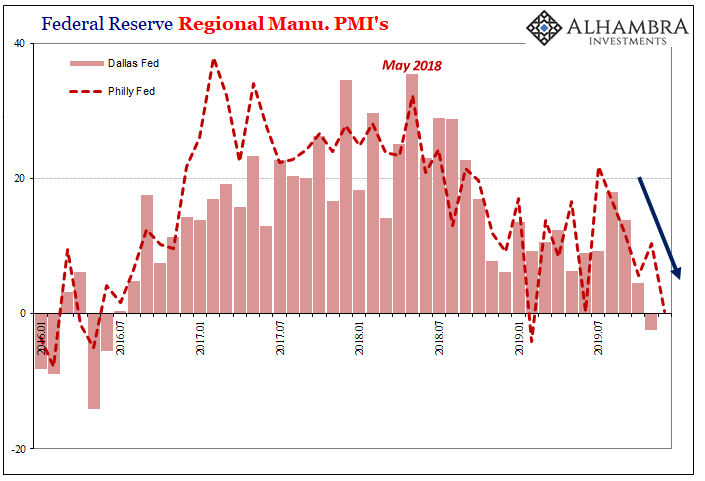 With those two now heading the wrong way, they put Richmond and the New York Fed’s Empire Survey into the updated category of best case. For the latter, the index has like the ISM flatlined at a much lower level in 2019 than during 2018. Not getting worse but also, contrary to the narrative, not getting better.

In Richmond, it has been mostly the same except for more volatility in the survey presumably because of volatility in the region’s manufacturing economy. The latest reading for the month of December, however, came in way short of expectations for +9 (which would have continued the rough upward trend), instead moving even further into contraction at -5.

It raises questions about the same kind of midyear improvement as had been indicated in Philly and Dallas. 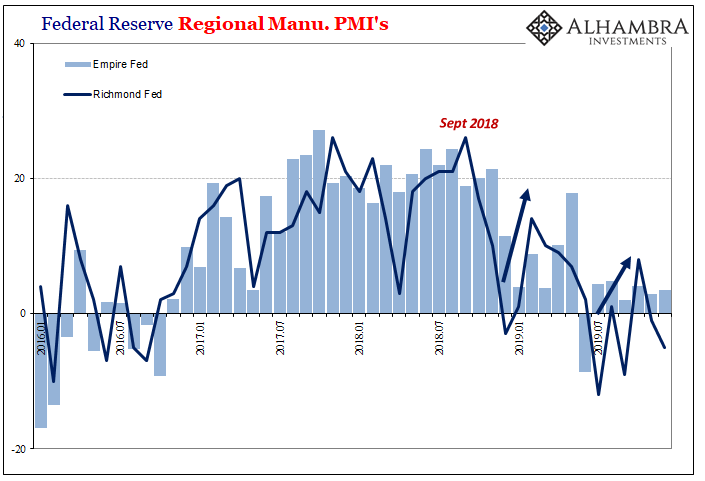 Of the major regional Fed surveys, that leaves only KC’s which really doesn’t require any commentary. The central bank’s Tenth District, covering most of the middle portion of the country, doesn’t appear to be improving nor has it at any point during 2019. It is the worst case. 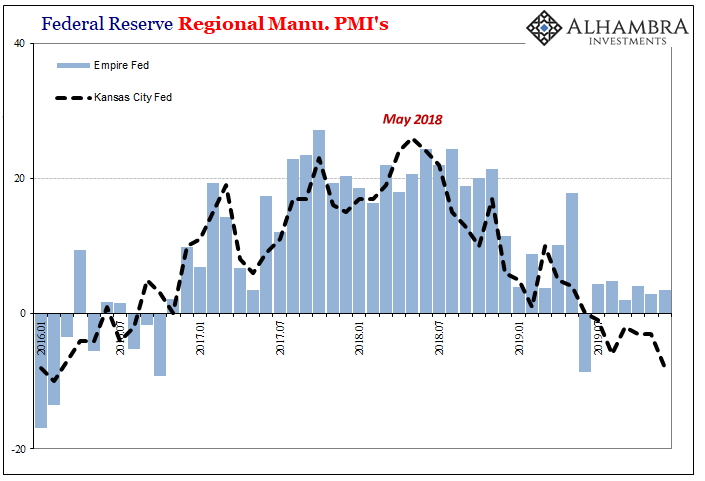 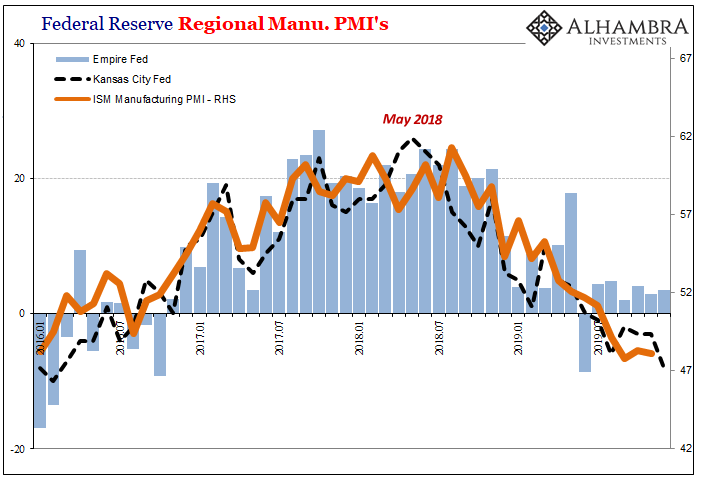 Not only does KC indicate continued and accelerating contraction across that specific manufacturing region, the data looks to be in close agreement with the ISM’s much broader Manufacturing PMI.

The Fed’s sentiment figures across the major set of them seem more consistent with the ISM than IHS Markit.

We already know about which way the dollar seems to be leaning, and therefore the continued problems across global trade. It would only make sense, then, that US manufacturing would be heading in that same direction if maybe not all at once or all at the same time (nothing goes in a straight line).

These figures are far from definitive, of course, but the majority of the data sets are now at odds with the idea of rebound – one that is supposedly getting stronger. Even Dallas and Philly are heading in the wrong direction (again), suggesting instead renewed difficulties in domestic production (which is consistent with more recent data showing seriously flagging US imports).

If that is indeed the case, then dollar, trade, and manufacturing continue to be consistently against this idea of a “strong” economy and its epic unemployment rate.