You don’t have to tell Mexico the bad news about how US auto sales ended 2019. They already know; in fact, knew ahead of time. Production workers who should be busy building more and more new cars for sale outside of Mexico, particularly for prospective American owners, must instead be worried if they’ll still have a job if things go on like this.

The global economy is on the mend, they say. Yet, there are so many signs that it isn’t. In a lot of important places, getting worse sometimes awful quickly. One of those signs is US imports including falling US demand for what’s made in Mexico. 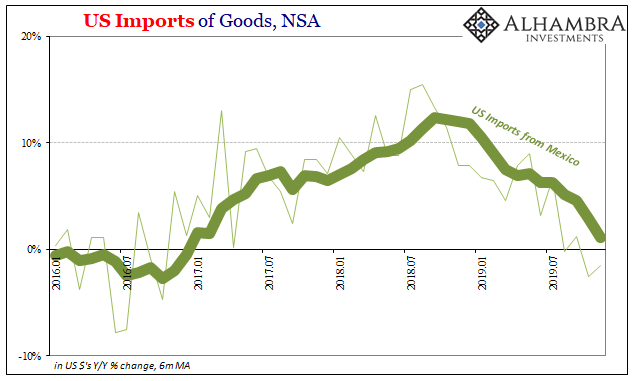 When it comes to vehicle production, you might have missed the news from our Southern neighbor earlier today. According to that nation’s Instituto Nacional de Estadística y Geografía (INEGI), total vehicle production in Mexico plummeted toward the end of last year. In November 2019, the assembly of new automobiles (the vast majority of which are meant for sale somewhere outside the country) was 16.7% lower than what was produced in November 2018.

And that was actually a little bit better than October when there had been (a revised) 20% fewer vehicles made. These numbers are by far the worst since the Great “Recession” and merely the escalation of a decline which stretches backward in time along very familiar (Euro$) lines. 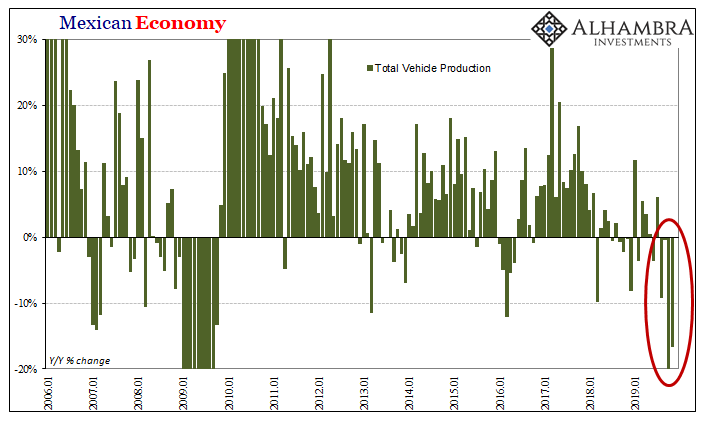 It should go without saying that when there is little demand for Mexican-made cars and trucks there is going to be very little growth in the Mexican economy. There are other factors to consider, of course, internal factors, but there is a pretty close relationship between the one (vehicles) and how it works out overall (total output).

The global car business says that we haven’t yet seen the worst of what’s going on. Mexico’s GDP (output) like its vehicle production levels appears too much like 2009 than 2017 (or even 2015). 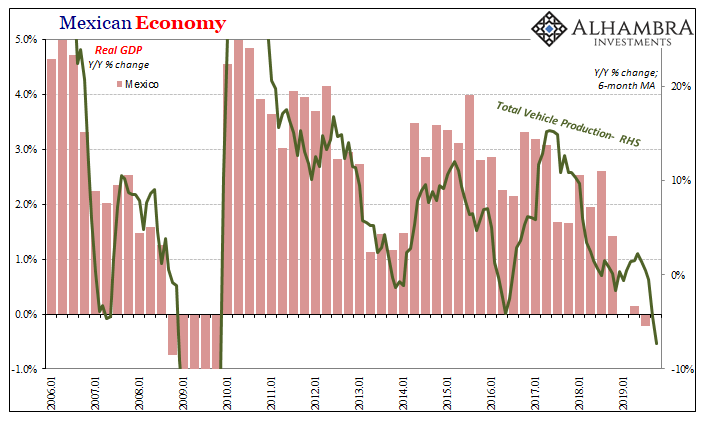 That includes (shown above) the country’s first year-over-year decline in real GDP in a decade during Q1 2019. It was followed only by a small rebound in Q2 (so small it doesn’t really count) and then an even bigger negative in Q3. And those three very different quarters all finished before the auto sector’s production plummet, most of which took place during Q4 – when the world economy was supposedly getting better.

We might care about all this for several reasons beyond the strict humanitarian interests to pity Mexico and the unfortunate recent circumstances of the place. To begin with, as noted repeatedly, trade wars. 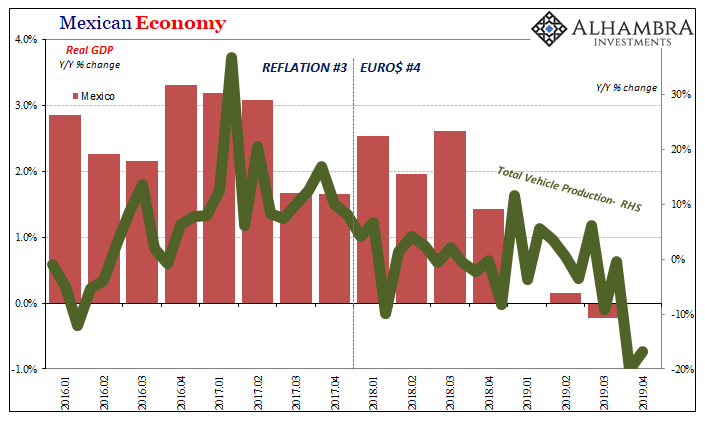 Mexico should be actually booming. I know the word “boom” has been completely erased and redefined over the last few years so as to be totally meaningless, but here I mean a real one. With production moving into the country from China, as far as the trade wars go Mexico is one of the clear winners. All else equal, a literal explosion of growth should have been very apparent…in 2019.

Not so. Therefore, something else (globally) must be taking place which has taken Mexico’s trade war gains and simply overwhelmed them with accelerating negatives.

That’s the other part, the most interesting part, of why we are watching Mexico like Germany or Japan. Despite the “stimulus” induced optimism we find in mainstream descriptions of what’s going on in the world, it just isn’t showing up in the real figures.

It was a clear sentiment change back in September when everyone had Jay Powell’s rate cuts and Mario Draghi’s QE to finally hang some optimism on and gird up their expectations. Having denied there was anything at all significantly wrong for months on end (that whole “transitory” nonsense), central bankers from midyear last year finally showed up.

Rate cuts and the like, the usual stuff that everyone because of pure rote recitation nods favorably along with as “stimulus.” They say they feel better whether they do or not because it sounds comforting that central banks are back in action and that’s what they always say in the financial media.

Looking around the world, however, it is difficult to find any comfort particularly in those places where it should be most evident. Germany is one, if for no other reason than its downturn has gone on so long the sheer length of time is by itself almost otherworldly. Mexico is another because it directly contradicts these big assumptions.

Circling back to trade wars, what Mexico shows is that in light of trade deals that have made so much of this recent optimism (on top of central banking; why isn’t the UST 10-year shooting upward past 2.25% again?) if the trade wars didn’t actually cause these seriously failing economic results then this spate of new trade deals won’t do for them what everyone has been told to think it will.

The US and China can sign every iteration or phase of a trade agreement and, apart from more positive sentiment, what will that do for the average Mexican autoworker? Therefore, Mexico’s economy overall? Those are in the throes of declining US and global demand that must still be declining. And it doesn’t have to be a crash around the world, either, a continuation of the same slow strangulation would be more than enough.

At some point everything will turn around, probably this year a Reflation #4 does show up, but is that really happening right now and, if not, what’s the downside look like if Euro$ #4 continues to set the global direction?

Like German and Japanese data, Mexico’s startling figures will do more to help you answer those questions than Jay Powell’s mid-cycle adjustment and rate cuts. He didn’t think there was any downside, and still says the risks are minimal, so he’s not going to be much help figuring out if or when it gets to accelerating.