The Astonishing Odds and Ends in November TIC

The Astonishing Odds and Ends in November TIC

The repo story especially as it is told from the TIC perspective is our main emphasis currently. However, there are other odds and ends in the series that deserve some separate attention if not to the same level. The dollar system is more than collateralized lending, and this will include a few items that I’m going to point out for reasons I can’t (yet) explain, if only to reiterate and emphasize the true shadowy nature of these largescale shadows.

It begins where it always begins post-2014, with central banks “selling UST’s.” 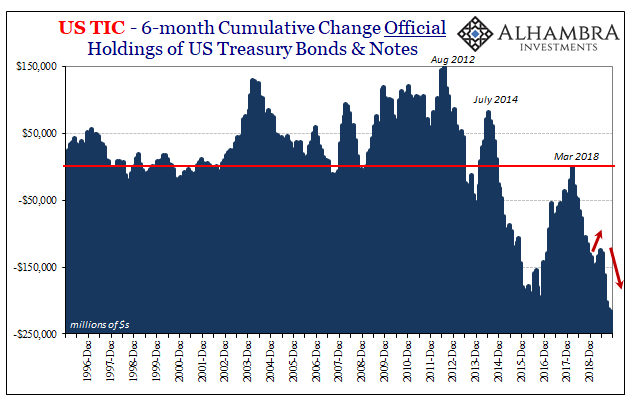 The amount was more modest in November (the latest figures) than the previous couple of months. That might’ve been, however, because of an unusual bout of private selling of the same US Treasury instruments, about $17 billion on net in the latest month. As a result, the overall level of net purchases of US$ assets (of all recorded types, both official and private) has come way down since July.

To oversimplify, that’s much more Euro$ #4 than a possible nod in the direction toward Reflation #4. 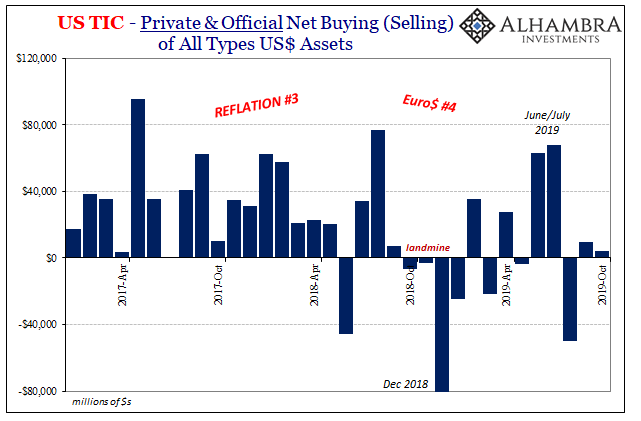 It’s the same in terms of the overall trend, too. Remember, in the non-linear world we live in small growth is actually contraction even though the simple rate of change might be on the plus side. Sideways or slightly higher isn’t nearly enough.

And, unsurprisingly, it hasn’t been particularly according to the red series (below) dating back to…2014. We have to adjust for the reported discontinuity related to CLO’s running around the Caribbean somewhere, but once we do the familiar ups and downs associated with the intermittent changes between reflation and squeeze show up in its latest version (#4). 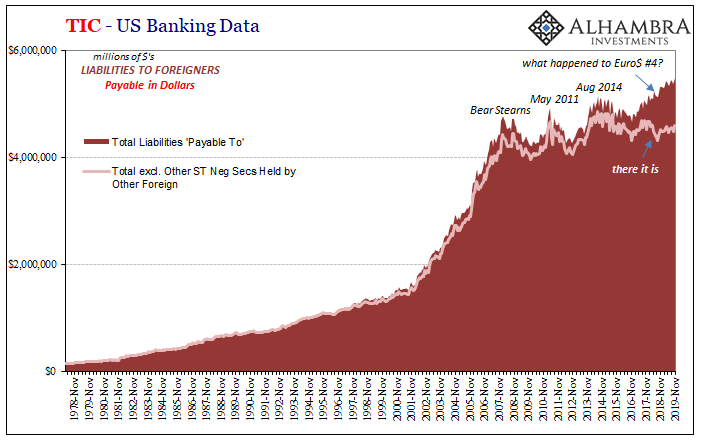 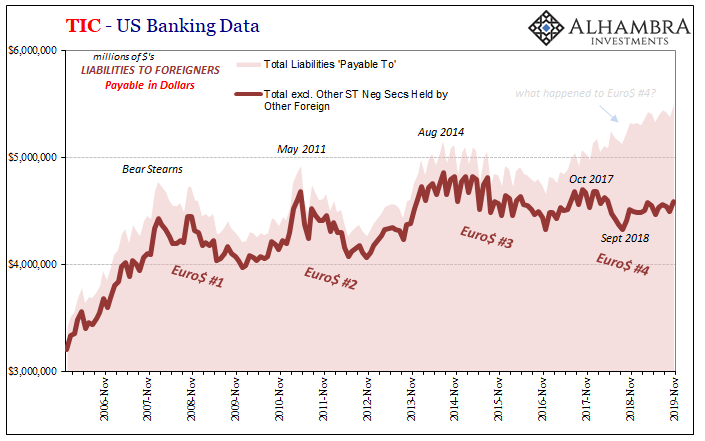 The CLO issue, referenced only in passing in our earlier repo piece but explained in a little more detail here, isn’t the only ongoing puzzle. The TIC data explicitly (in the footnotes) tied together these “other” ST Neg Secs (short-term negotiable securities) with the Cayman Islands and banks reporting custody of them on behalf of domestic (meaning US) customers.

While that could be rich Americans betting on Jay Powell and “reaching for yield” in junk and then attempting to avoid any taxes (I mean defer) by domiciling the accounts in tax havens, more likely it has to do with offshore banking and the various shadow conduits amongst domestic and foreign banks as well as domestic subs of foreign banks and foreign subs of US domestic banks – and every possibility in between.

How about the Japanese, too?

This is the one, in particular, that I haven’t yet pulled out of the numbers. Bear in mind, I’ve singled out Japanese banks for being the trigger upon Euro$ #4 especially late in 2017 and their big (systemic) withdrawal in January 2018 that seemed to kick everything off. 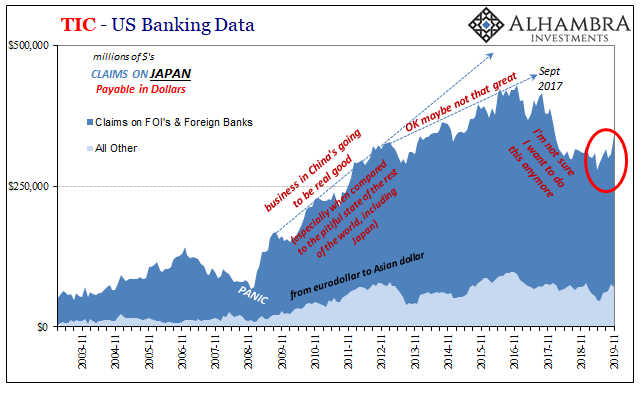 What the TIC data of late shows is Japan back in the dollar business. Maybe.

That makes the second month last year where this potential relationship was more easily observable. 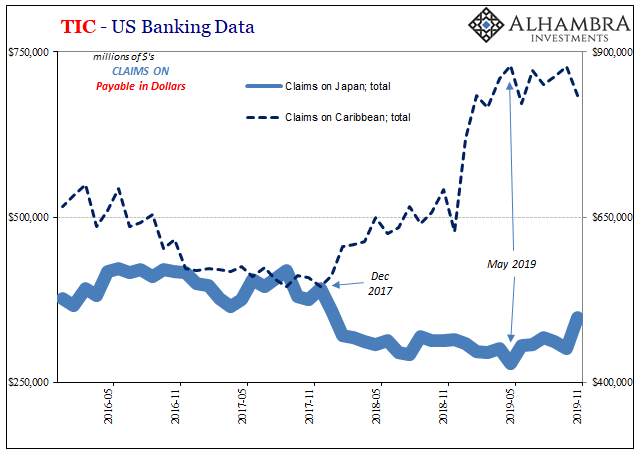 What is that relationship, exactly? Got me. It’s hard now to dismiss it, though, since there has to be something going on. And, more to the point, on both ends, Japan and the Caymans, both are places that we have, and the data has, singled out for special attention throughout Euro$ #4.

Obviously, it’s not an all-or-nothing relationship where what happens in Japan explains what comes out in the Caymans and vice versa; there are clearly other factors and processes involved likely on both sides but especially within the Caribbean (particularly at the end of 2018).

Sometimes you just have to marvel at the complexity, though, just sit in amazement how this offshore system will surprise and occasionally astonish even after you’ve long since thought there was nothing left to be surprised and astonished about. An inverse relationship between Tokyo and Grand Cayman? Oh man, the possibilities (not to mention the implications).

And to then link those with CLO’s and repo? That’s going to take a lot more time, assuming it can ever be done at all.

We call it a shadow money system for a reason. Even when some of it does actually show up in some data somewhere, it still might not be immediately apparent what or why.

Here’s yet another reminder that the situation is far more complex, and globe-spanning, than anything Jay Powell is remotely aware of let alone close to being able to influence.