We knew German Industrial Production for December 2019 was going to be ugly given what deStatis had reported for factory orders yesterday. In all likelihood, Germany’s industrial economy ended last year sinking and maybe too quickly. What was actually reported, however, exceeded every pessimistic guess and expectation – by a lot.

IP absolutely plummeted in the final month of 2019. Compared to the prior December, the index was down an alarming 6.7%. Minus seven doesn’t sound too until look below and realize that Germany’s worst month during the 2012 recession had meant -2.8% for IP. December’s updated figure is comparable to November…2008. 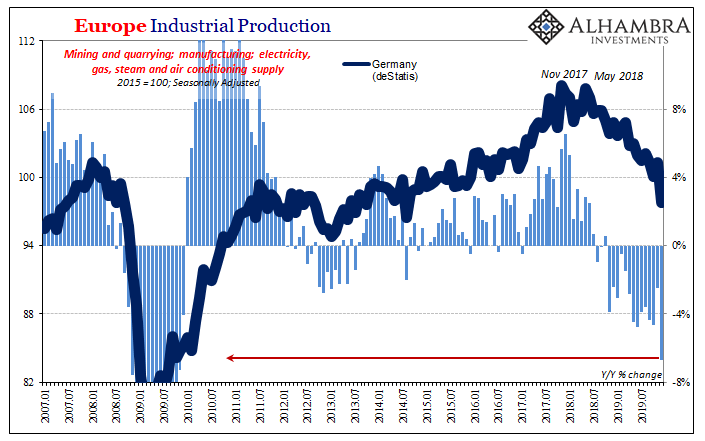 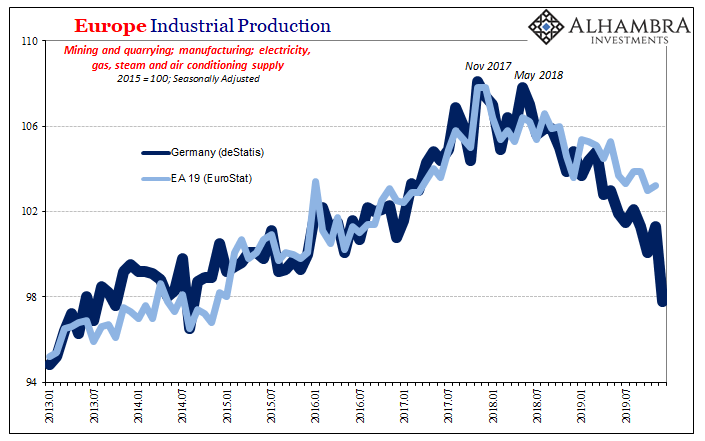 Why go back to Germany again? To make a special point of how this economy is leading the way down in this downturn. You can see it not just for the one country, but how the whole of Europe (above) is being dragged lower, too. This is, unfortunately, a leader.

I don’t even have to put Japanese IP onto a separate scale they are that synchronized; more so than they were during Euro$ #3 which hit Asia and mostly avoided Europe. Euro$ #4 takes no prisoners, apparently. 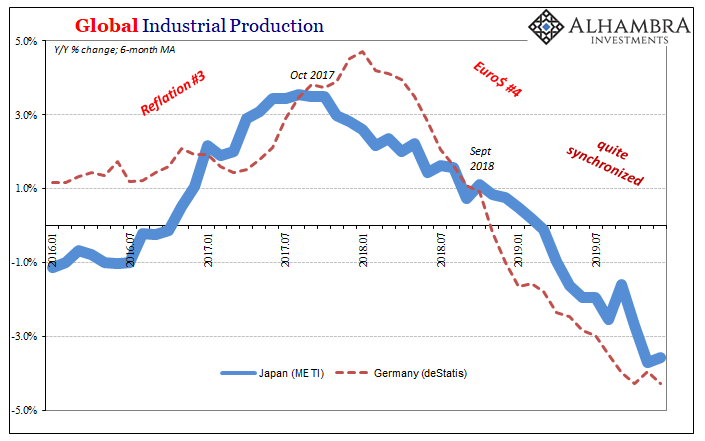 Two global economic bellwethers and the bellwether sectors within each spread far, far apart across the globe. You wouldn’t think there would be any way for these two systems to act this way so closely together.

Even central bankers, though, have finally figured out that they do. Economies used to be treated as far distant and separated islands. Richard Clarida called these global headwinds, what we see in these economic figures, that he correctly pinned on what he called disinflationary pressures. Whether or not he understand they are, and how they are, related to the almighty dollar remains the entire issue.

Thus, it’s not just German and Japanese industry which are aligned. Industry follows trade, and trade is most closely associated with those disinflationary pressures. The eurodollar system, and the global dollar shortage it intermittently leads to, affects and infects foreign trade first and foremost.

This is the squeeze in action and you can see the headwinds it creates. 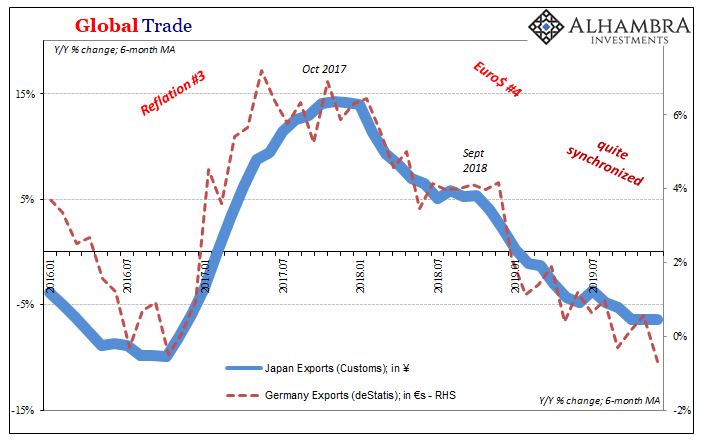 It has been two years in action, a little bit more where Japan is concerned, and only now are we starting to see contraction proportions that look like a traditional recession in places like Germany. Japan isn’t all that far behind, either, especially when you consider how much Japan Inc. still matters to that domestic economy. 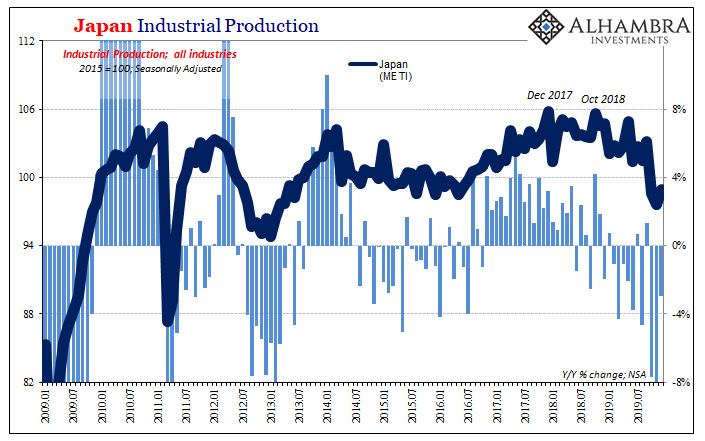 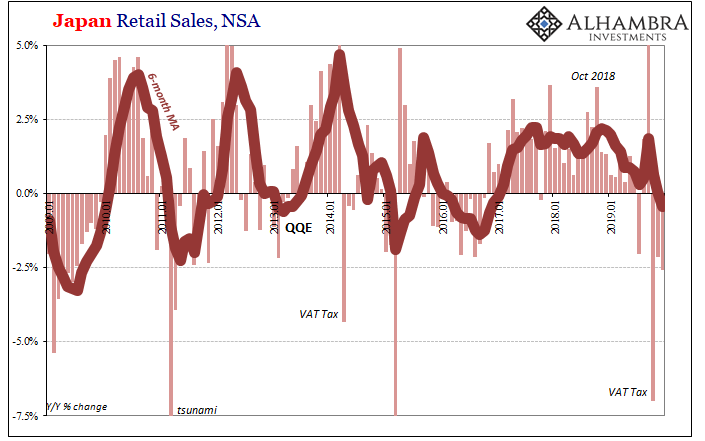 This was not how it was supposed to go after the tax hike. It had been expected that Japanese consumers and industry would rebound quickly because the government, on the advice and consent of its central bank, had declared Japan’s economy more than strong enough to withstand the adjustment.

Instead, like Germany, Japan also ended last year not just in the wrong direction but accelerating in its downturn.

We look at Germany to get a first sense of these global headwinds and how intensely they may still be blowing into the face of the global economy. We then check our work by corroborating it with other similar situations which should otherwise be totally detached. Finally, we backtrack from headwinds to these disinflationary pressures and find the work of the eurodollar’s hidden squeeze.

Only it’s not so hidden. The primary reason it might seem that way is because while officials have finally connected the dollar to conditions in, and directions for, the global economy, they still don’t know how or why the dollar moves. If they did, Jay Powell wouldn’t have sunk himself in the quagmire of bank reserves and irrelevant “repo” operations. 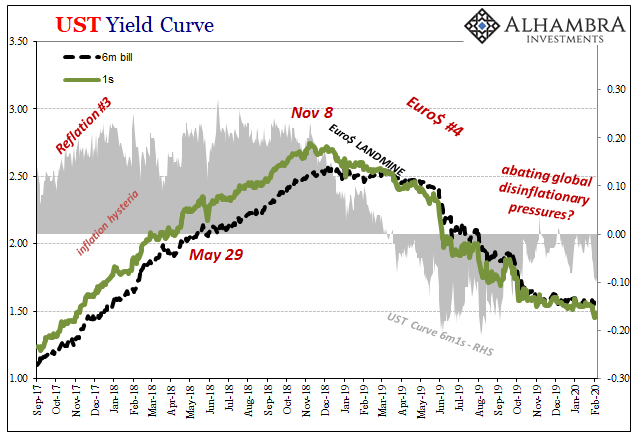 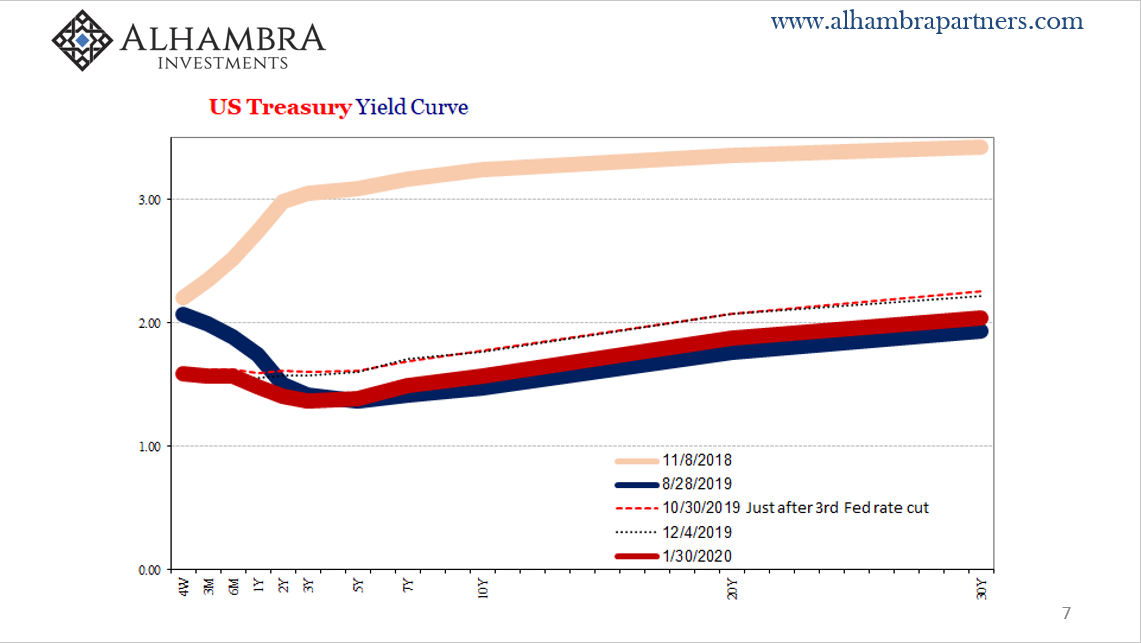 Don’t tell the Germans and Japanese everything was getting better by December.

If disinflationary pressures have abated as everyone keeps saying, knowing that they know little or nothing about them, there is unsurprisingly no evidence for it. There’s a lot more consistent and corroborated data for the headwinds they’ve created and now they appear to be still picking up in these key places; therefore, indicative of what we should expect elsewhere around the world moving forward into 2020.

It’s not about Germany nor is it Japan. It’s Germany and Japan first before others and then all the rest.