Earlier today, Mexico’s Instituto Nacional de Estadística y Geografía (INEGI) confirmed the country’s economy is in recession. Updating its estimate for Q4 GDP, year-over-year output declined by 0.5% rather than -0.3% as first thought. On a quarterly basis, GDP was down for the second consecutive quarter which mainstream convention treats as a technical recession.

On a yearly basis, it was actually the third straight. Nothing seems to have changed as 2019 drew to a close. Mexico’s struggle and its downturn all began quite a long time ago. 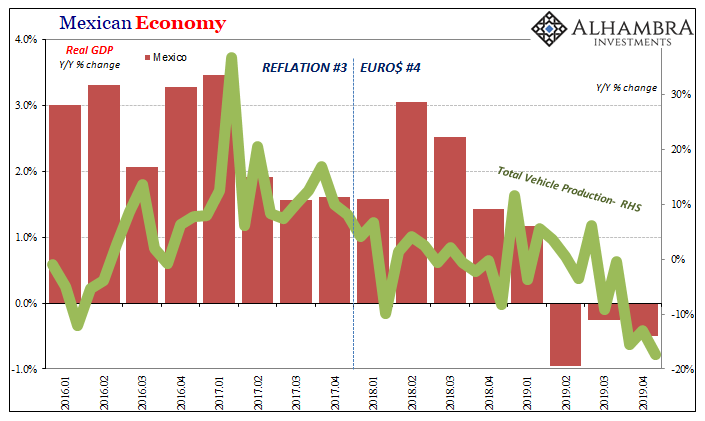 In Europe, Germany’s deStatis confirmed GDP in that country’s fourth quarter. Nearly identical to its original estimate, the updated number displays basically zero sequential growth. As in Mexico, the German economy was smaller in Q4 than it had been in Q1. 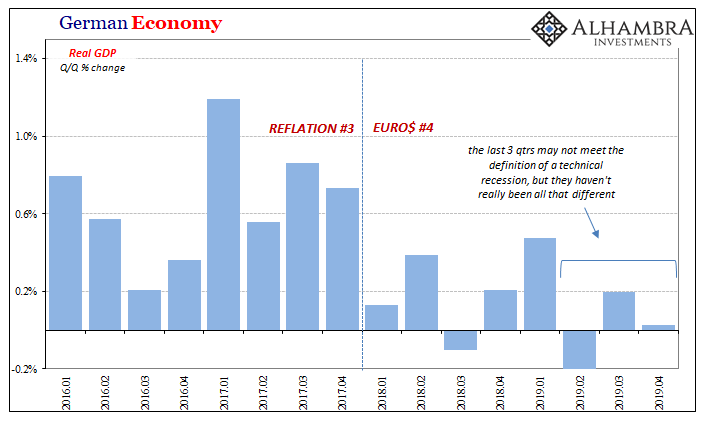 Looking forward into early 2020, Japan’s Cabinet Office said that of its Indices of Business Conditions all of them had disappointed in December 2019. The Leading Indicator rebounded only slightly in last year’s final month from a decade low the month before. This despite widespread expectations of a more pronounced upswing.

The government’s Coincident Indicator didn’t even manage an uptick, continuing its downward trek. It has been hoped that with three months past the tax hike Japan’s economy would start to look like it hadn’t really been that weak heading into it. The slump instead grows worse, and is shaping up to remain in this position for the foreseeable future. 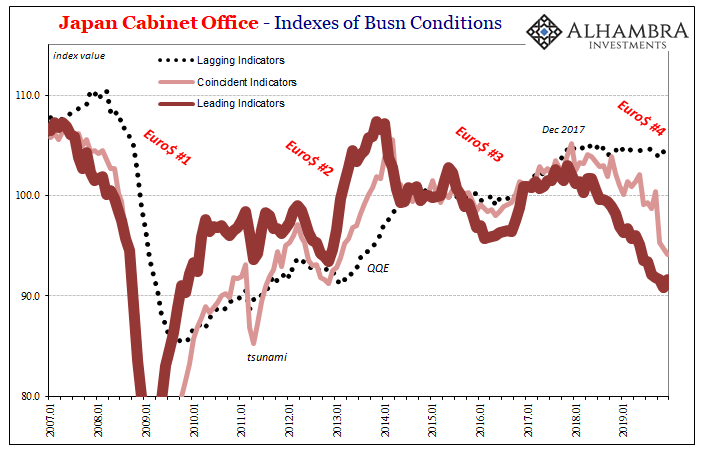 North America, Asia, Europe. Three different places all linked together by the same thing, experiencing the same downturn. The global economy really does seem to have been in rough shape, if not worse shape, in Q4 2019. No turnaround, no rebound, not even stabilization.

And all that before the virus.

I imagine this is why in curves and bond markets we’ve surpassed last August. You may recall that earlier period for the ubiquity with which the r-word had been used. Only it hadn’t been an all-or-nothing warning to that effect, rather inversions and curve distortions were gesturing over a panoply of risks.

Those never went away, as the global data easily displays. China’s virus outbreak is only being added to an already lengthy list of headwinds and disinflationary pressures.

In eurodollar futures, specifically, the 2021’s have been fighting it out all this time over where the bottom might be. Going all the way back to June 2018, remember it was eurodollar futures that first inverted that long ago, the June, September, and occasionally December 2021 contracts have taken turns as the bottom of the curve’s sinister inversion smile.

As of today’s trading, all three have been bid up in price past their prior August/September highs. This recent rally in eurodollar futures predates common knowledge of the COVID-19. Like gold and UST’s, the market was turning more pessimistic before the first case of the coronavirus had been reported.

The market has been positioning for the growing confirmation that central bankers really don’t have much useful to offer (knowledge, forecasts, and especially bank reserves). Maybe even a second global landmine (following the midpoint) in those final three months of last year (just like the final three months of 2018). 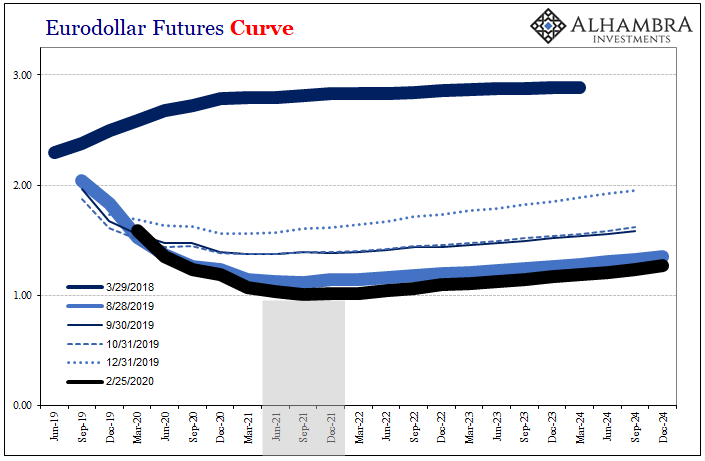 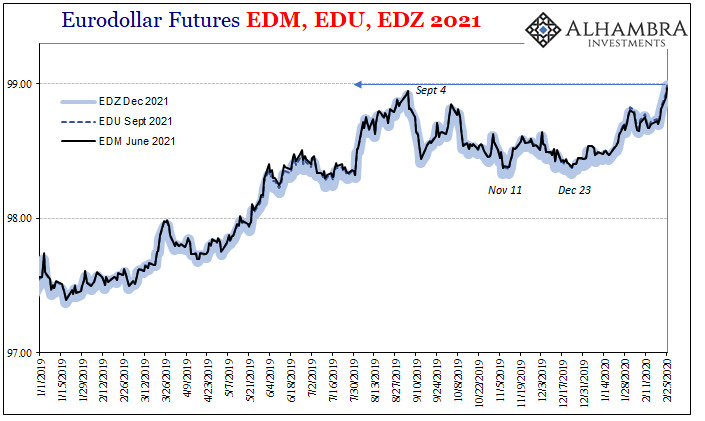 What that means is the same thing it had meant in the summer and autumn of 2018 – rate cuts. In this case, more of them. Both the September and December 21’s traded above 99.00 intraday before falling back slightly below that round number level. The probability spectrum moving forward from here is being well-positioned for another episode of ZIRP in the US.

In fact, despite three rate cuts so far, the level of inversion in this part of the curve is significantly greater now that it had been before the first of them. Comparing the September ’21 to the March ’20 contract price, you can see how the calendar spread has easily surpassed its level from that prior point. This indicates the growing conviction for not just another spurt of rate cuts but perhaps the full series of them.

Nothing substantial had changed in October, November, and December, just mainstream commentary. 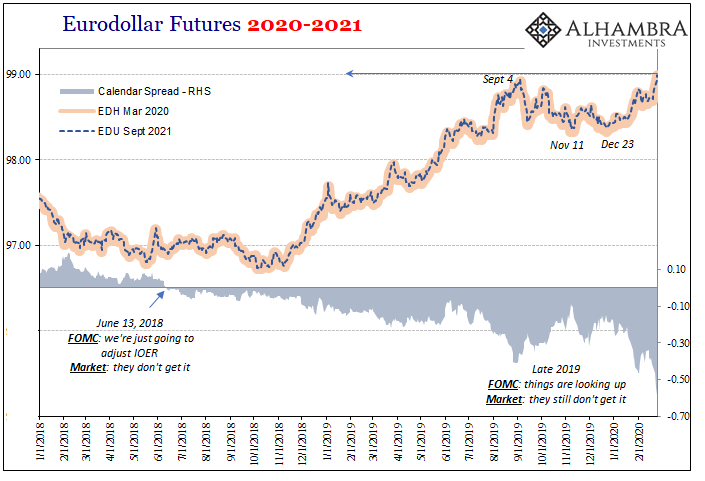 It’s also an indication for a nastier Euro$ #4. When the market was in the same position during Euro$ #3 in July 2016, when contract prices a year or two down the curve were spiking above 99.00, that was at its end. There is little (to nothing) to indicate number four is anywhere close to its last gasp.

If anything, potential economic and financial fallout from the pandemic will give it more legs than the considerable staying power it has already displayed. If things were just getting serious around the world during Q4, when it was allegedly getting better, then Q1 is setting up to be that much more of a disappointment.

In that sense, we are back to the spring of 2019 – wondering how quickly will it be before the FOMC acts once again. Asking ourselves what will they say this time, what’s the latest excuse?

Don’t answer that. We already know. The last three rate cuts were, purportedly, because of trade wars. Those are over with, certainly aren’t talked about anymore, a temporary matter. What is the coronavirus if not another convenient “transitory” factor?