In a week replete with chaotic movements and arrangements, a puzzle has emerged. Conventional wisdom says that when stocks tank bonds rally. While the latter takes place regardless of the former, during those times when the NYSE finally pays attention to what might be herding financial agents into safety instruments the bond market typically rallies even harder.

It sure did over the last couple of weeks as both curves and stocks collapsed in angry togetherness.

This week, however, even as equity prices continued to get slashed Treasuries especially at the long end seem to have joined in on the fire sale. Shareholders appear to have become the world’s primary pessimists! Have we lurched into an alternate dimension, arriving in Superman’s Bizarro World where everything is backward?

Maybe, but liquidity crises (and this is one) often produce such strangeness. Sure, there is a collateral bid underlying Treasuries of all kinds, but most acutely at the front end in the bills. Still, there’s demand for the long end but in these situations there’s also Treasury market liquidity to consider alongside.

In the more extreme liquidation cases, liquidity isn’t just a concern for risk assets. There’s leverage even in the safe stuff, too. Much less, of course, but enough so that when the going gets really rough it can produce temporary dislocations and distortions even there.

We need only go back to 2008 to see what I mean; and I use the October 2008 example here only because it is the closest case to what we have before us. This doesn’t mean we are repeating the Global Financial Crisis, because that will never be repeated, it just means we are in outlier, tail risk (except it’s not really tail risks) territory once more. 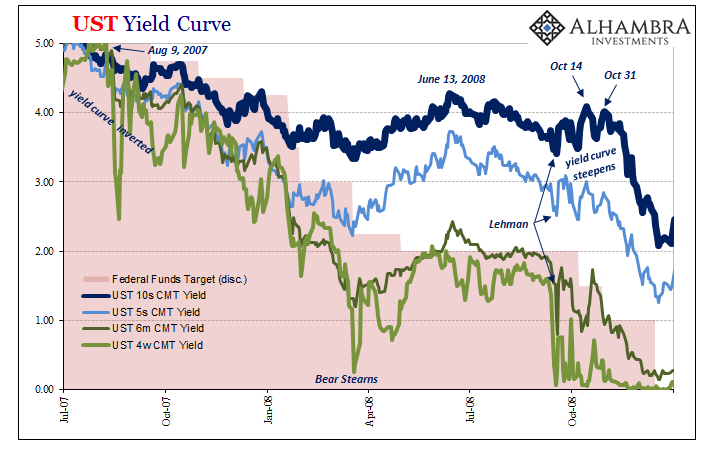 After the GSE’s and then Lehman/AIG in mid-September 2008, look what happens to the UST market (above). Initially, bill rates fall and coupon rates follow; the former much more of a decline in yield because of what I discussed earlier (the chaos of low rates).

Pay close attention to what happened next; from September 18 right on through the majority part of the panic liquidations (that wave lasted to October 10), the longer end of the UST curve sold off too! While the equity world, indeed the whole global system, was melting down from the massive repo (collateral) repudiation that was taking place in the shadows, the 10-year benchmark rate spiked from a low of 3.41% on September 17 to 4.08% by October 14, 2008.

Not only that, you can clearly see and appreciate the UST market volatility while that long end selloff was taking place. It absolutely stands out on the chart above. 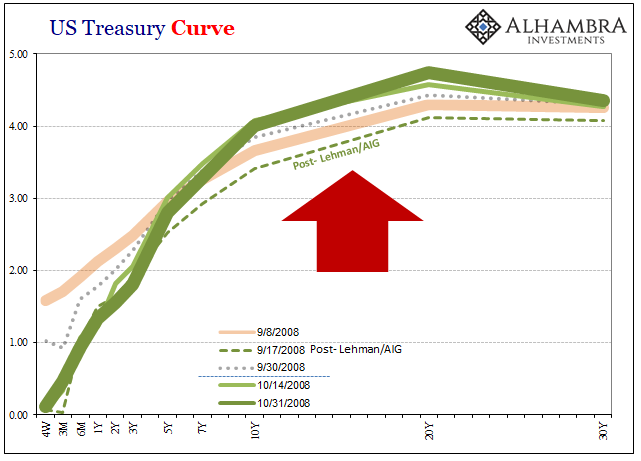 The curve overall therefore steepened rather dramatically during the actual event of what became the worst financial panic in four generations.

We aren’t yet in that same game, but we are in the ballpark meaning what’s happening now is outside of typical experience – even for the last twelve years of a near-constant global dollar shortage. This end of it is so short it’s actually infected, it appears, UST’s, too.

In other words, when the long end sells off along with stocks (after those bonds have rallied tremendously, of course) that tells you just how much conditions have deteriorated and how this money shortage stands out among the many others. Even the more extreme ones like July/August 2011 and January/February 2016 seem quaint today. 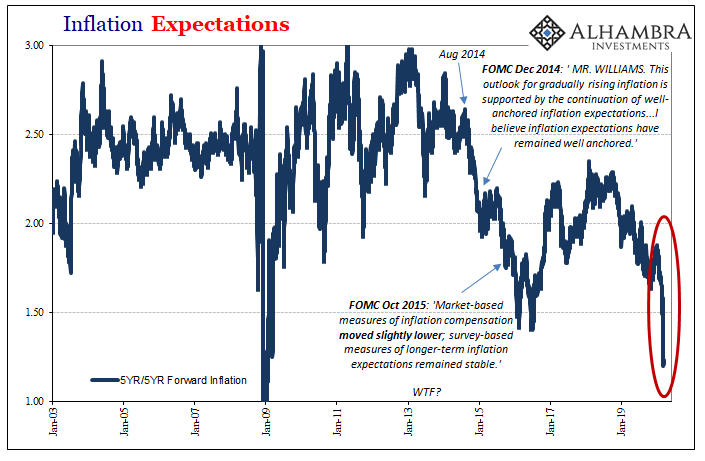 The reactive Fed continues to play catch-up, fighting a battle it is ill-suited to handle given its outdated tools and intellectual framework. Jay Powell’s not fighting with one arm tied behind his back, he’s over across the street making sure there are enough light bulbs for people to use during the day.

FRBNY’s big announcement has been boiled down into wickedly small potatoes. Two auctions, half a trillion each, those along with a coming third were together the “bazooka” aimed at calming everyone down. Dealers bid for $78.4 billion of the first one and a paltry $17.0 billion in today’s. Yes, a total of $95.4 billion out of a possible $1 trillion, or less than 10% of what was made available.

As I wrote yesterday after the first shot of their dud-zooka:

Either things aren’t nearly as bad as they seem (literally no one is buying that scenario), or something is wrong in bank reserve-land. Perhaps dealers just don’t want them, or maybe they don’t have the spare collateral to post for them.

With the way now UST coupons are behaving, very 2008-ish, I seriously, seriously doubt it’s the first one. A crisis is upon us, the scale of which we won’t know for some time, and no one wants the Fed’s “money.”

Imagine that. Unfortunately, Jay Powell and all the rest of them are incapable. That’s the corruption. And the crisis.