The front end of the yield curve is flattened out near enough to zero. While the bill yields I noted this morning did not finish the day session with a negative, they were close and several have traded that way in the after hours session (as of this writing, the benchmark 3-month bill is -1 bps).

This thing doesn’t end until they start doing something about the collateral situation. It is what has thwarted everything the Fed has thrown out there so far. Either this thing just keeps going and finally squares itself whatever level of destructive liquidations along the way, or officials ditch their silly, outdated monetary playbook and start doing some real offshore, shadow math.

So far, Federal Reserve officials have re-applied the PDCF because they just don’t know what else to do. That’s the corruption, and it’s not like they haven’t been warned. The yield curve has been telling them to put up some real money…or else. It’s been twisting and distorting into that very shape since November 2018. 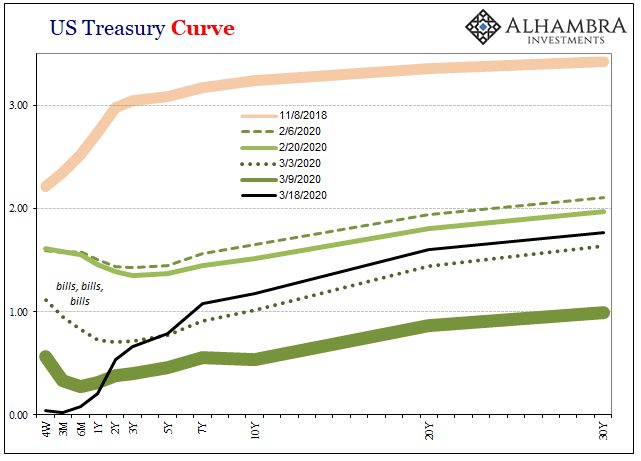 All the while those idiots did nothing. They talked about the unemployment rate and instituted three “rate cuts” while rates were already falling even though September’s repo rumble once again showed them the errors they were making; and the errors were not the level of bank reserves.

The Fed’s PDCF isn’t the only program at the central bank’s disposal so far as collateral is concerned. While that one is an attempt to loosen eligibility and requirements, so that more collateral can be used to gain bank reserves offered by the Fed, what about the Fed’s massive holdings of UST’s?

You probably don’t know it but a chunk of the SOMA portfolio is made available every day to primary dealers. The New York branch is and has been in the securities lending business for a very long time. At their disposal is a very large pool of safe assets built up after four QE’s over the years (shrunk only partway by QT).

All the more galling, these people know what goes on in the repo market on the collateral side and yet they have no clue and don’t intend to change. Stupidity is a form corruption, no?

Each and every January, the FOMC votes to reauthorize several of its standing Open Market programs. Below is that last one approved for this year: 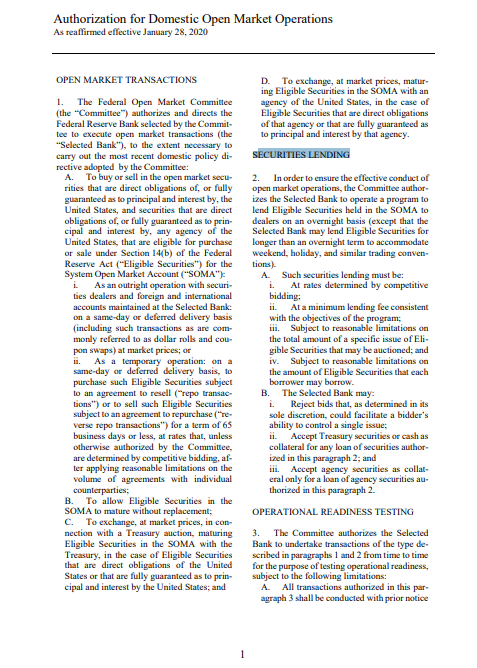 The Fed’s securities lending business is a lot like any other bank more likely an insurance company. Those who own and manage a large stock or pool of otherwise inert securities. SOMA is definitely one of those.

For a fee, a primary dealer can submit competitive bids to “rent” UST’s from the Fed, all overnight (except on specific occasions), subject to “reasonable” limitations as worded in the FOMC authorization.

You probably won’t be surprised to find that dealers have been more and more interested in doing so ever since, oh, November 2018 when the yield curve started to collapse and invert. A pretty clear correlation; more heavy buying in UST’s to the point of inverting the yield curve, the more overall primary dealers show up to rent SOMA assets. Fears about a possible bottleneck that today is no longer just a possibility. 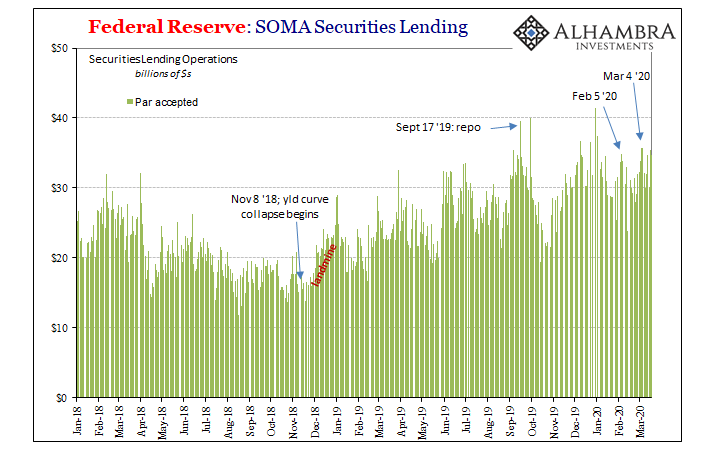 These are not monstrous numbers or changes in them, but they are substantial and give us an important sense of otherwise hidden operations and conditions. During last September’s repo rumble, for example, while every “expert” and policymaker was talking only about bank reserves and calendar quirks, there was a sharp spike in accepted bids for UST’s held in SOMA.

Dealers sitting on the sidelines except in their bids for additional borrowed UST’s.

There’s a seasonality to the pattern, sure, but pretty obvious that going back to, again, November 2018 the trend is upward. The demand for collateral isn’t something new that just hit the system over the last few weeks; the shortage has been building for a long time even though the federal government has been issuing more and more.

Officials just dismissed this “strong worldwide demand for safe assets” as the work of a bunch of whiny pessimists who didn’t appreciate the unemployment rate rather than grasp instead how it was the serious call for help from among those who actually deal shadow money inside the monetary world.

Why hasn’t the daily pars exploded over the last few weeks?

Simply because it’s only the primary dealers who can bid for these securities. They aren’t the problem, at least not directly. The big guys are clearly building up their collateral reserves, their collateral cushions, in their own ways as well as through this option – and don’t appear willing to use and repledge in order to redistribute good collateral to the rest of the world sorely lacking it.

The demand for collateral outside the primary dealers must be enormous; we know that already, look at the plunge in T-bill rates. The pressure is building on the dealers and they are forwarding and offloading only some of that pressure here on FRBNY’s SOMA holdings. And what is being bid is clearly going no farther.

That’s the weakness in all the Fed’s designs. It depends upon dealer banks to do its work, and there are times when the dealers simply refuse; they’ll sit right on the sidelines and continue to build up their own cushion as the systemic pressure rises. In fact, as witnessed here, the more that pressure rises the greater their cushion becomes.

Here, it looks like a steady increase whereas in the shadows it has become an explosion.

“Our” central bankers have all these tools and indications at their disposal, which only gives them the appearance of being technically proficient. And it is that which they’ve used to great effect in fooling the world.

Does FRBNY do securities lending and collateral? Yep, you bet ya. Does that necessarily mean they do it well, or have any clue about what should be done in collateral markets, including the grave implications if it isn’t?

It’s past time for you to be the judge about that. The lack of accountability was the reason for GFC1, and now it is for GFC2.