What If The Economy Wasn’t In A Good Place Entering Its Shutdown?

What If The Economy Wasn’t In A Good Place Entering Its Shutdown?

Why didn’t they think about this first? All of a sudden, with markets in the toilet (especially stocks), everyone is itching to get the economy back up and running. The first real peeks at what’s happened to it (as we’ll see in a minute) have definitely contributed to what seems to be an about-face.

Many are starting to ask if the damage from shutting down the economy for a prolonged period will end up being worse than the pandemic itself. It’s a legitimate question.

To state the obvious upfront: this was and remains a no-win situation. Either way, significantly bad things were going to happen. This was one of these pick-your-poison scenarios usually reserved for science fiction novels, to figure out what has the greatest chance of being the least evil except in a real-world setting filled with unpredictable complexities.

And we cannot forget the human costs, those already lost and the many more left to suffer. There is no scorn for compassion.

It gets to be very political, meaning partisan, very quickly, too. Trump haters are going to blame every single thing they can on the President (including an instance of ingesting aquarium cleaner) while at the same time committed Trump-ists will testify to his great, near flawless leadership regardless of events and outcomes.

The truth will be somewhere in between, as usual.

The vast majority of the public doesn’t care about the Washington games; it just wants answers.

If there has been a major error, one that is showing up far sooner than likely believed before, it’s the “booming” economy. What’s clear is that the federal government prioritized flattening the disease curve over economic considerations. It’s fair to ask why, and, like the trade wars, it’s equally fair to presume the plan of action proceeded from the false assumption.

Everyone said the economy was in a good place at the start of this thing. Even those that recognized the “slowing” of last year were onboard with the idea that the economy was turning around and heading in the right direction (the BLS obviously included in this assessment).

If you think the unemployment rate was a fair measure of economic circumstances, it stands to reason why you’d likewise favor an aggressive, blanketly indiscriminate shutdown over a more targeted, surgical approach to stem the spread. A strong economy would have provided a significant margin to cushion the inevitably harsh economic backlash.

The stock market agreed on its way to a record closing high – not all that long ago.

But what if the economy wasn’t really all that good at the start?

Then you would expect to see a quick backlash and an equally stark official U-turn. Suddenly, “getting the economy back open again” becomes the priority. QE’s aren’t going to be enough to fool anyone (or enough people) like they used to (more motivation behind the U-turn).

It’s only March 2020, and the first real glimpses at the economic situation are sobering. As I wrote before, these initial figures are of limited use; but that doesn’t mean the numbers are meaningless. How big the contraction might end up being will help determine the far more important conditions of its immediate aftermath. 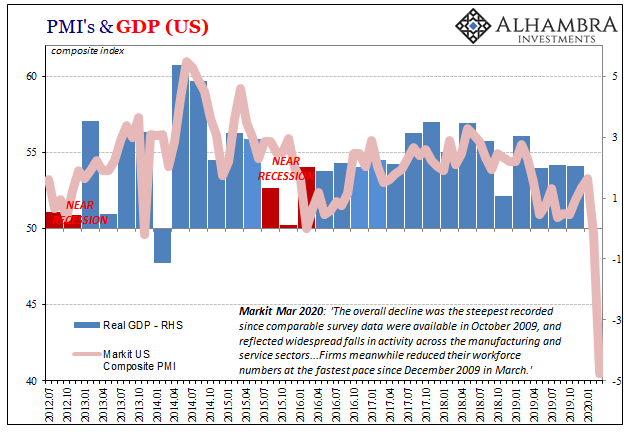 According to IHS Markit, March 2020 is already more consistent with the bottom of the Great “Recession.” Its Composite index, which combines manufacturing and services, dropped to 40.5 from just below 50 in February. The Services index came in at 39.1 and the only reason the composite remained in the 40s was the Manufacturing Index’s artificial boost from supplier times (as supply chains collapse) which will reverse hard next month. 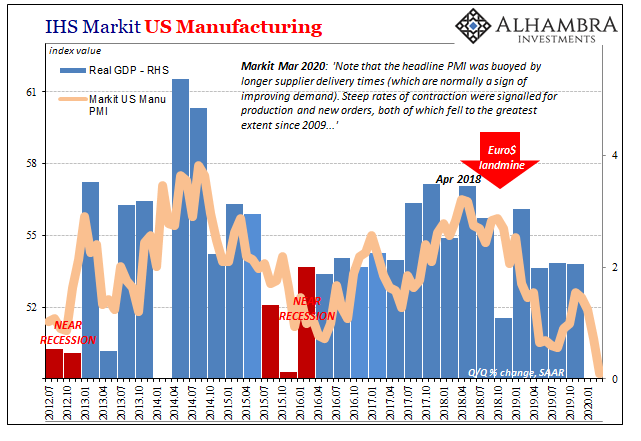 These estimates along with other PMI values from countries around the world are hinting at more of the economic worst case at least in the short run.

That was certainly true in Europe where even the most optimistic groups, such as central bankers, began rolling out QE’s half a year ago. That economy was in more obvious trouble than the US before this outbreak began. 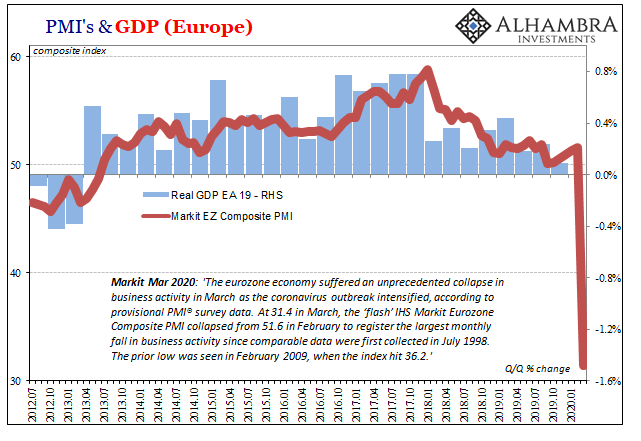 The Composite PMI for Europe utterly collapsed, coming in at an incredible 31.4 as its flash for March 2020. It was substantially below the lowest point (36.2) recorded from Markit during the worst portion of GFC1.

The Services PMI was pegged at, and this isn’t a typo, an unbelievable 28.4. Both of those were significantly below the most recent average forecasts (37.5 for the services, 38.5 for the composite).

You can look at these estimates a number of ways. Maybe the COVID-19 pandemic really is that deadly and contagious, this huge setback is just the cost of dealing with it as best as can be done. You might also believe that no matter the scale of the contraction before us, the global economy will bounce back just as quickly and equally as strong on the upswing as it already appears weak to the downside. 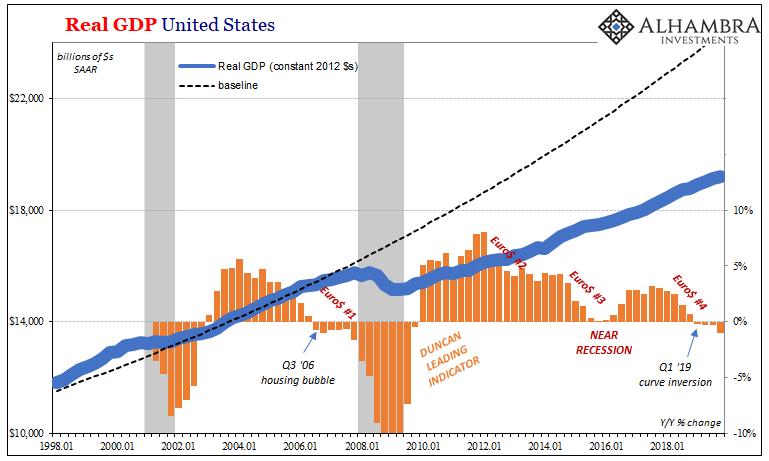 There’s also the nontrivial possibility that this was a huge miscalculation. The global economy had been in a downturn, at least a significant slowdown for several years (Euro$ #4). Europe ended 2019 already at the brink of recession and, pardon us, Jay Powell, the US wasn’t all that far behind.

What that last one would mean for the future would be an increase in the probability that the recovery isn’t a recovery; that long-lasting damage will be done to the system. Businesses and capacities already on thin ice before the coronavirus just will not be able to withstand both the pandemic curve flattening on top of the criminally unnecessary GFC2 (itself a result of officials mistaking a fragile situation for strength).

As I said, it’s not really about the short run, instead everything is staked on what comes after. Still, on the lookout for a real recovery this isn’t an inspiring preamble. Thus, I think, the sudden shift in priorities.

There's a key difference between aid and stimulus. I’m *very* much in favor of helping American workers and even doing so in this way; by all means, send out the $1,000 checks.

What I’m very much against is the idea that it will do much systemic good.https://t.co/9WEsjK8H96