Not Good: Eurodollar Futures Curve Sells Off, At The FRONT

Not Good: Eurodollar Futures Curve Sells Off, At The FRONT

If the Fed has promised to print an unlimited supply of money, then why are inflation expectations at crisis lows and falling? At the same time, there are still-growing signs of illiquidity and an interbank crackup. Bazooka after bazooka, yet they don’t seem to be having much effect.

That’s true domestically but more so offshore. You may have seen references to something called the OIS-FRA spread recently as it has gone vertical and refuses to normalize no matter what Jay Powell announces. It’s really much the same as the TED spread, only substituting the Overnight Index Swap (OIS) where TED employs the 3-month T-bill.

Both are measured against 3-month LIBOR which is the main offshore unsecured interbank eurodollar rate. OIS is a futures market that prices what participants think the Fed is going to do with short-term interest rates into the future. Right now, the market is certain there will be ZIRP for the foreseeable period.

The 3-month T-bill is, well, the best repo collateral around therefore flirting constantly with sticking on the other side of zero (as all the bill yields will have to reach that level first; and they are now close).

But what does LIBOR tell us? Unlike fed funds, LIBOR is straightforward: what rate banks might lend into the eurodollar market unsecured by any collateral if they were to lend. Going back to March 9, it is clear the banks included in the LIBOR survey began to change their mind. Since March 12, they absolutely have. 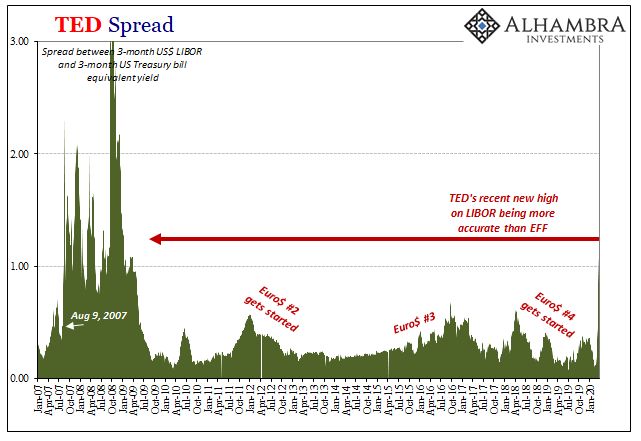 As a consequence, both TED and FRA-OIS have blown out. Both have reached 2008 proportions and are doing so despite everything the Federal Reserve claims it is doing to stop them: from overseas dollar swaps to its alphabet soup of bank reserve eligibilities, nothing is working. Even yesterday’s stock market rally was totally, completely unrelated to QE’s and the FOMC’s various whatnots.

As my colleague and new podcast partner Emil Kalinowski likes to say, there are all kinds of monetary forms in our globalized economy. The Fed “prints” bank reserves which are the equivalent of laundromat tokens – useful, but only in the narrowest of circumstances. I think Emil is being too kind; I’m not sure they have any use at all, aside from keeping the Fed’s accountants, lawyers, and now Blackrock busy, impressing the financial media to keep writing fictional tales about powerful bazookas.

What we can clearly see from both GFC1, when reserves first became “abundant”, and now GFC2 with reserves are promised at “unlimited” levels, they just don’t matter.

Because of that, there’s more trouble on the horizon. If the markets are right, big trouble. Where OIS is a market attempting to price out at what level the Fed will be in the future, eurodollar futures are the equivalent looking ahead to where LIBOR should end up.

You’ll remember that this market was absolutely correct about LIBOR heading lower while Jay Powell was still mulling over whether or not to pause the Fed’s rate hikes. 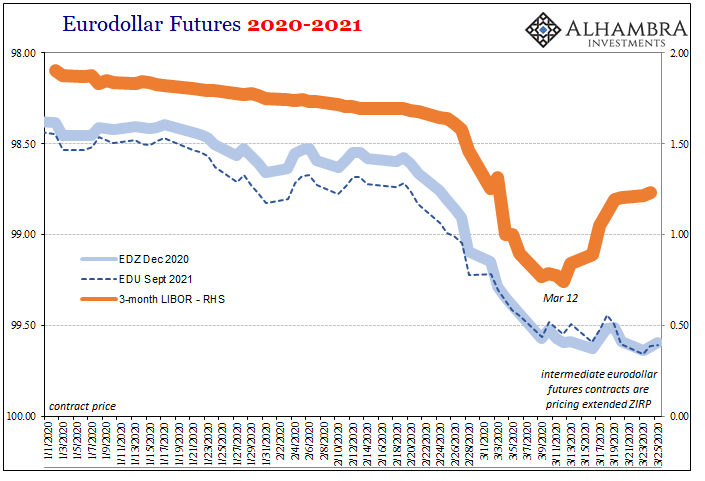 Right now, looking ahead into 2021 it’s the same as OIS. Eurodollar futures contract prices in that maturity range are consistent with prolonged ZIRP. That’s a past problem already realized.

There’s a very troubling selloff in eurodollar futures right now, just not at the long end where the market would be trading in anticipation of all the successes QE and dollar swaps are supposed to bring. The selloff is taking place at the front.

This is an especially alarming development: 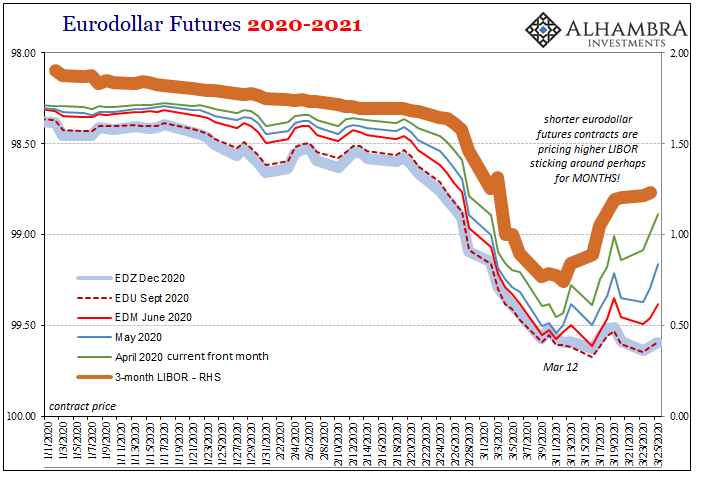 The scenario now being priced into the eurodollar futures curve is one where LIBOR could continue to rise, more than it has, and possibly stick around at elevated rates for months – maybe even longer.

So much for the unlimited money printing.

Normally, such a curve shift would indicate the market discounting the Fed thinking everything will be good, therefore, as in 2017-18, rate hikes. As both OIS and the intermediate contracts for eurodollar futures show, however, that’s not what’s going on here; if LIBOR is up and it’s going to stay up, it will be for reasons that have nothing to do with Jay Powell’s ridiculous puppet show.

Except in the circumstances where monetary policy is impotent and fails to cure what has been for some time a global dollar problem, a monetary shortage that is set to get even worse. LIBOR is likely to remain high because the banks that make up the survey panel aren’t liking what they are seeing.

That includes, by the way, the flood of global fiscal “stimulus”, too.

This doesn’t exactly scream “it’s over”; rather, it suggests we are still closer to the beginning than anything else.

Smallest of silver linings: how about the Fed now? The ranks of people who still call monetary policy “stimulus” and “money printing” have to be shrinking. Like 2008, the lack of money in monetary policy is on full display for everyone to see.

The real good news is saved for when the FOMC is revealed to enough people as the empty suits they are, then a critical mass can be reached so as to get rid of the whole lot of them. Starting over with honesty and technical competence; enough with damn puppet shows and laundry tokens.

I’ll say it again: FIRE JAY POWELL AND THE WHOLE FOMC IMMEDIATELY; while we still can. 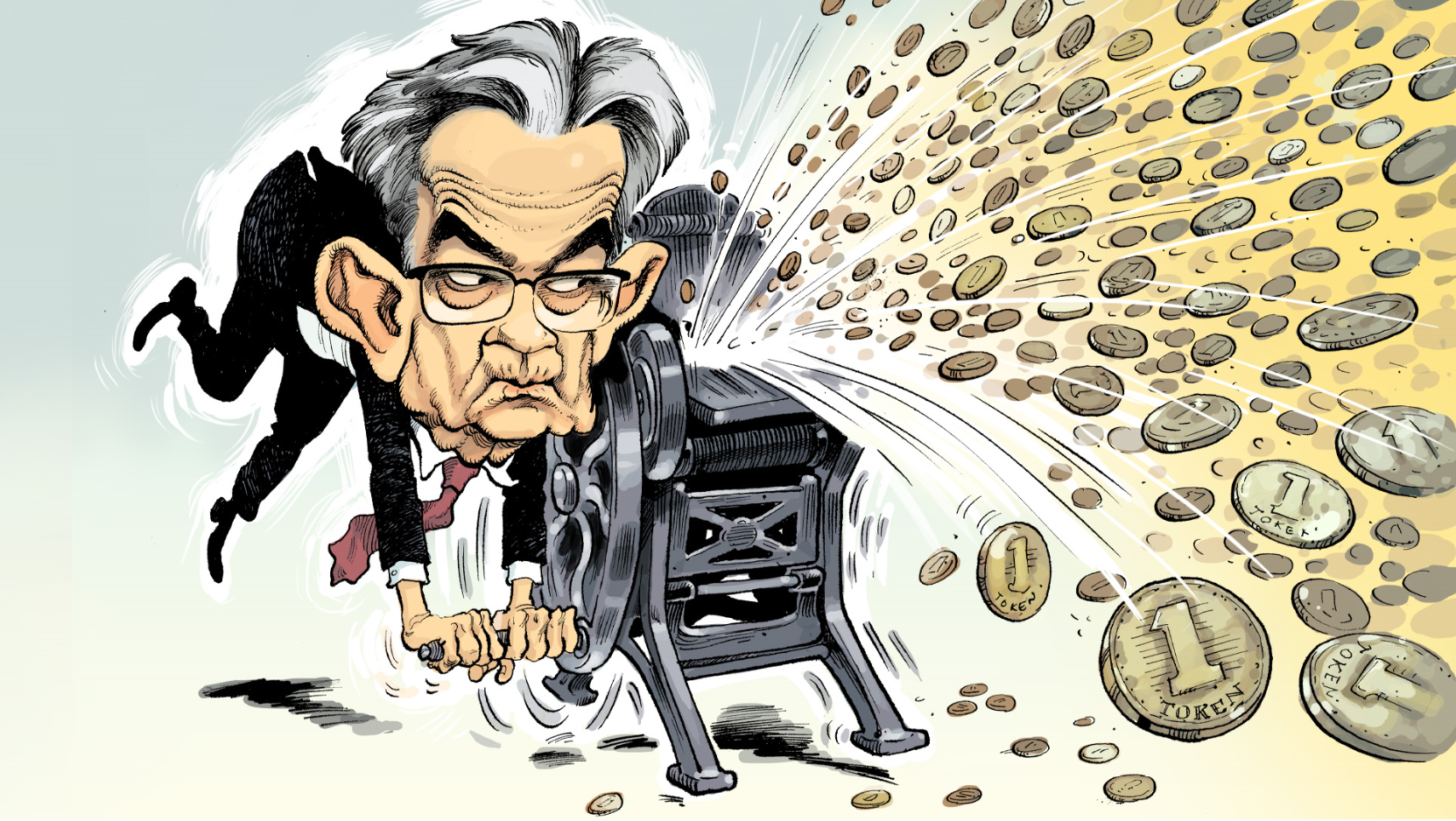