The Federal Reserve announced the Secondary Market Corporate Credit Facility (SMCCF) on March 23. The intent of this program was to calm the corporate bond market (secondary) then experiencing a massive blowout. Credit spreads of all kinds of corporate securities were exploding, the market in danger of completely shutting down.

According to its latest balance sheet statement as of this afternoon, the Fed hasn’t purchased any assets. Nothing. Not a single penny shows up on the comprehensive compilation of H.4.1.

The Fed’s stock of assets has swelled, of course, rising an additional $604 billion since last Wednesday; $361 billion more in UST’s, $55 billion in added MBS, even $19 billion and $40 billion from the Primary Dealer Credit Facility and Money Market Mutual Fund Liquidity Facility, respectively. 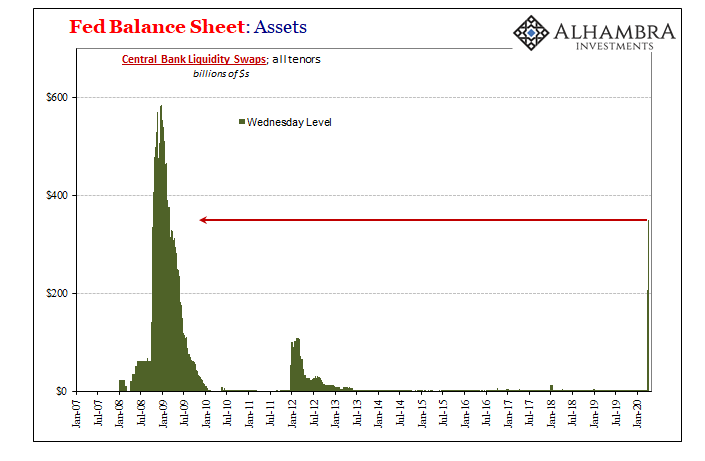 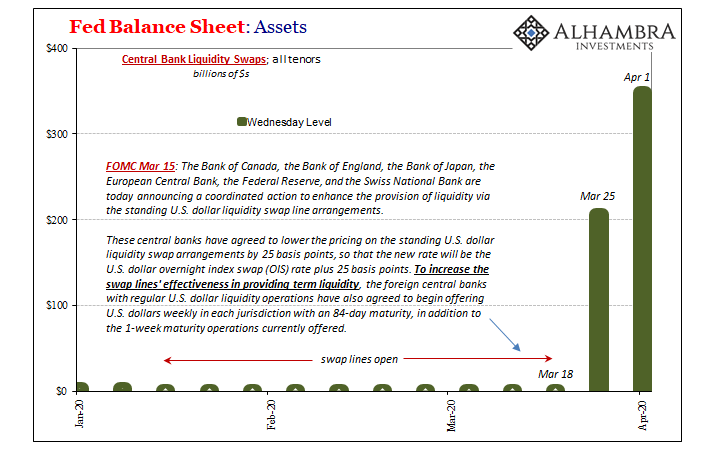 That last one is really weird not because the levels are at crisis proportions, rather what’s strange is when they became this way. Not immediately; the Federal Reserve announced swap line “enhancements” on March 15 and it took what looks like another whole week before any overseas official body began taking them up.

Because it wasn’t until March 19 that these were expanded to include more than the original five counterparties. The geniuses at the Fed had these things open the whole fire sale liquidations through GFC2, but only for these certain jurisdictions (shades of ’08).

Once the list was expanded to include the Reserve Bank of Australia, Banco Central do Brasil, Danmarks Nationalbank (Denmark), the Bank of Korea, the Banco de Mexico, the Reserve Bank of New Zealand, the Norges Bank (Norway), the Monetary Authority of Singapore, and the Sveriges Riksbank (Sweden), suddenly demand grew to be very 2008-like. The Federal Reserve is no substitute for a dynamic global dollar marketplace because it is a rigid and most-times incapable bureaucracy.

In other words, had the swap list been exanded to this second group of central banks way back on, say, March 1, guess what the balance of dollar swaps would have done during the waves of fire sales and liquidations taking place up to mid-month? Usage would’ve spiked much sooner. It only looks like there’s a correlation between better behavior in markets and dollar swaps because of this unrelated bureaucratic shift.

The Fed’s activities don’t actually help except in pinpointing where, and sometimes how much, there’s a problem. Did the expanded list end the run? No. It was already petering out before then.

Getting back to corporate bonds, as I noted at the outset there’s not a trace of any purchase activity under SMCCF on the books. But the same day the program was announced just so happens to be the same day corporate credit spreads peaked (at insane crisis levels). 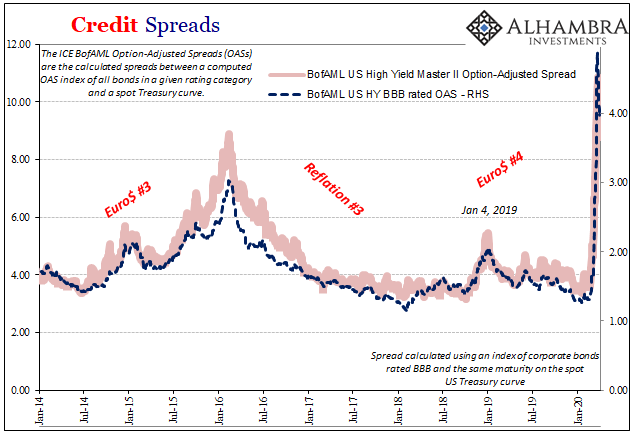 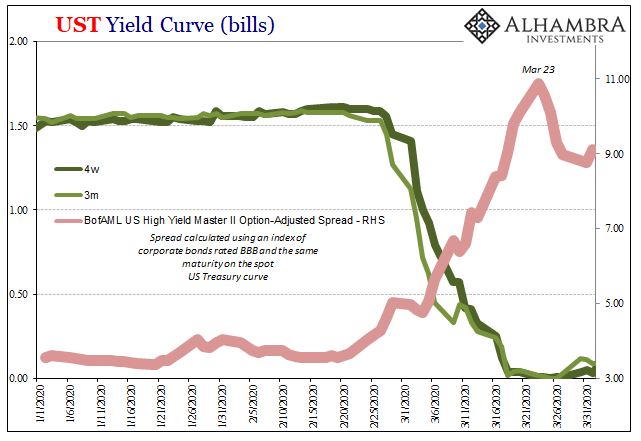 In other words, the central bank didn’t actually do anything other than take credit for the outward relaxation in monetary pressures. At most, it may have convinced buyers that it was safe enough to re-enter the secondary corporate market to go bargain-hunting, but as far as any underlying fundamental changes, there weren’t any.

Like the dollar swaps, the SMCCF is an illusion. If Jay Powell can convince enough financial agents that the thing is over with, he really believes that will be the end of it. A variation of the mythical, and disproven, Fed put.

This is where our GFC1 experience is instructive. The Fed threw everything and the kitchen sink at it from October 2008 to ZIRP and QE that December, and still market volatility was enormous (a polite way of saying crash) until finally the last destructive wave of liquidations throughout the first ten or eleven weeks of 2009. Swaps, QE, and alphabeted abbreviations everywhere.

The illusion never lasts. Think about it in terms of this SMCCF; even if the Fed was buying up corporate bonds (and corporate bond ETF’s), does that actually change anything for corporate issuers currently hanging on by a thread? The fundamental properties, and the repo collateral bottleneck, which so spooked this market aren’t altered by either fake or real central bank activity.

And as it pertains to that bottleneck, the fears over it were just empirically verified.

What the Fed is trying to do is create positive sentiment, and it’s been able (with tremendous media corruption) to make it appear like it has succeeded (marginally) because the mid-March calendar bottleneck is history. Leading up to it, nothing Jay Powell did or announced made any bit of difference including QE6EVA. Then, later in March, the Fed doesn’t even need to buy anything including corporates to spark a modest rebound in spreads and other assets.

The direct liquidation pressures had abated allowing the illusion to finally take hold.

We see it most directly in repo fails and collateral. 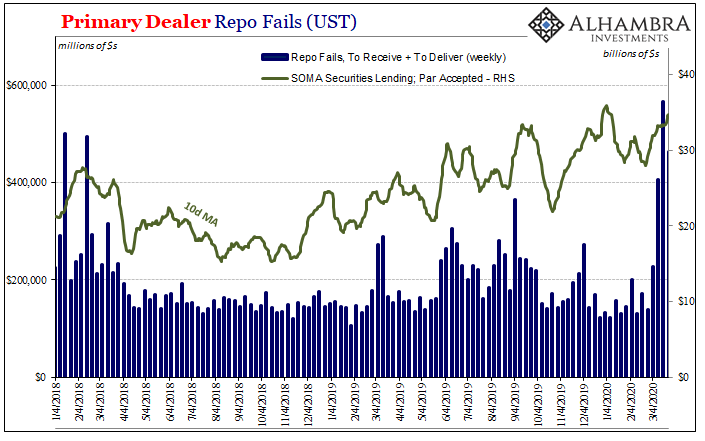 The amount of weekly fails reported by Primary Dealers surged to more than $566 billion during the middle week of March (18). They were still high last week (25), $463 billion, but falling as less direct pressure was applied globally.

The dollar shortage, after its destructive wave of liquidations crested at the bottleneck, receded into the background. 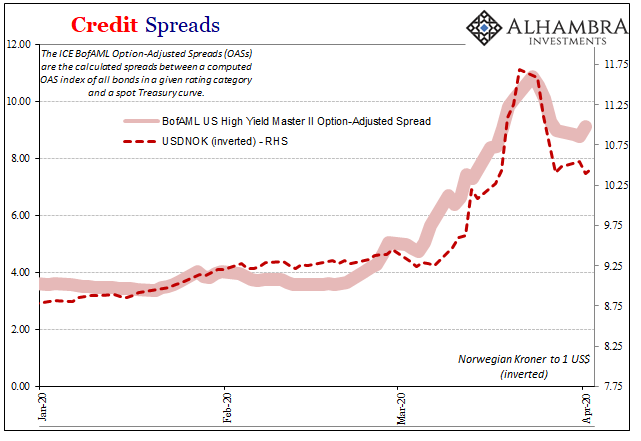 It all happened together all at once while Jay Powell struggled futilely, helpless as a kitten. Then, all of a sudden, after mid-March, the Fed’s transformed into an awe-inspiring tiger? Did the FOMC just luck itself into the right combination of programs which finally ended the fire sales?

Of course not, but that won’t stop everyone from saying that’s what happened.

What I’m getting at is this: the Federal Reserve didn’t change anything. The dollar shortage, which is better revealed by the dollar swaps, moved back into the shadows after it temporarily ravaged the visible world. This isn’t abnormal; it’s just what happened in 2008 (as well as at times during Euro$ #’s 2 and 3). 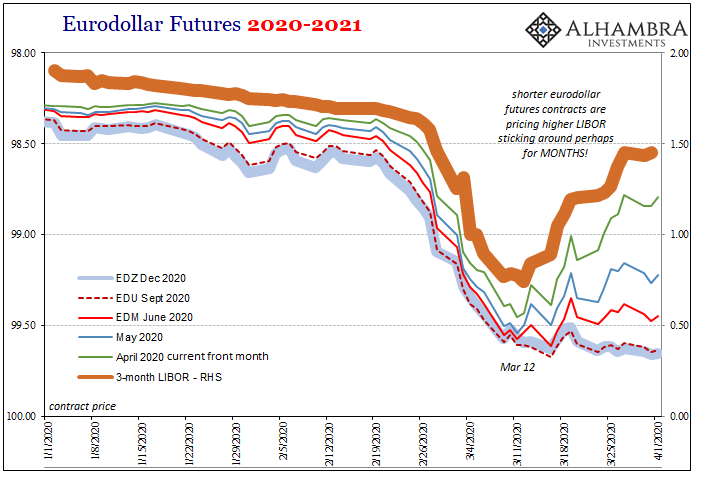 What that means is, should the roiling shadow problems decide for whatever trigger to re-emerge from the shadows and begin wrecking the place again, Tiger Jay will be reduced to a kitten all over again. That’s just what LIBOR (TED; FRA-OIS) is indicating.

The first wave of GFC2 is in the books. Many people take that to mean it’s all over, the worst is behind. Many of the same believe that because they’ve been conditioned to ignore the evidence in order to believe, on faith, the Fed has done an effective job (after asset markets crashed worldwide, but whatever).

We’ve seen this all before – they even called it “abundant reserves” back in the last few months of ’08. It ultimately amounted to no difference then and it won’t this time, either. Don’t take my word for it, look around at the correlations and market positioning.

Swaps and now FIMA, SMCCF plus QE’s; the dollar’s still rising and the bond market curves still collapsed (especially the longer ends). The only real difference is that the monetary shortage became less obvious again – just after mid-March. The Fed didn’t need to purchase a single corporate.