Nearly A Trillion In Bank Reserves, Where’s The ‘Money Printing?’

Nearly A Trillion In Bank Reserves, Where’s The ‘Money Printing?’

Over the last five weeks, the Federal Reserve has been in crisis mode. As a consequence of all its balance sheet expansions, the expansive alphabet soup of programs, along with QE6, the level of bank reserves has risen by just over $900 billion. That’s the increase leftover for the banking system after everything adds up on the asset side and whatever gets subtracted as liabilities.

Just shy of a trillion in five weeks blows away anything the central bank did during GFC1. From the week of AIG/Lehman until the middle of November 2008, a span of 10 weeks, Ben Bernanke’s FOMC increased the level of bank reserves from practically nothing to more than $600 billion.

Powell has outdone him by an additional 50% in half the time. It has been so much so quickly, the greatest “monetary” effort in US history, you can barely see the flood on a long-term chart with the full series. 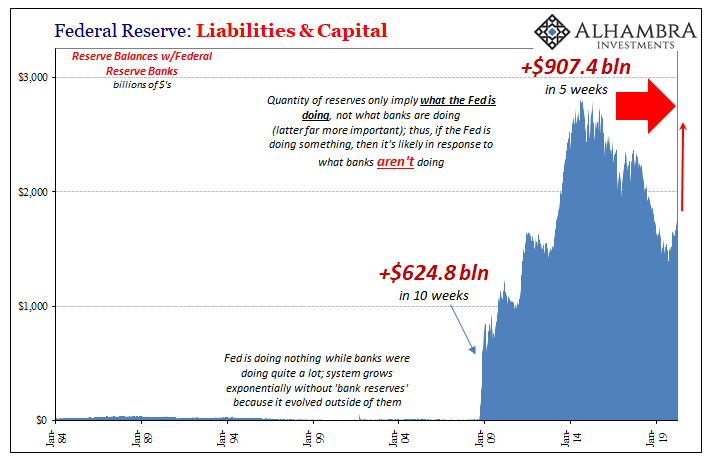 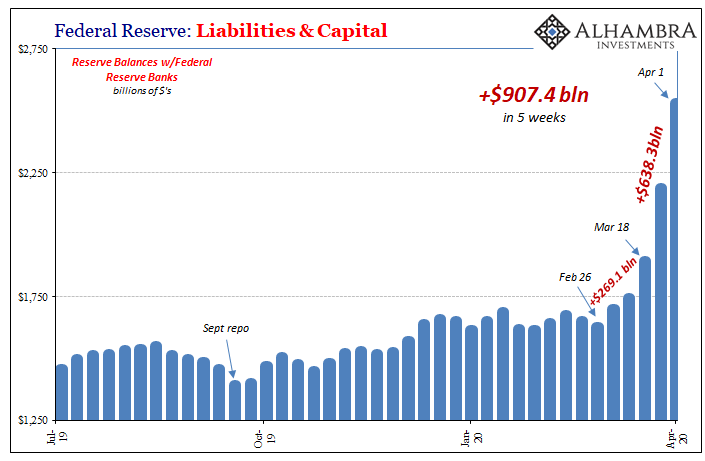 And that’s exactly what Mr. Powell wants you to think has happened. The Fed’s Chairman, like those who came before, would be absolutely thrilled if you thought about what he’s been doing as an irresponsible increase in the US money supply.

Given the alternative, devastating deflation, Fed officials right now don’t care if you think this is overdoing it. John Maynard Keynes was right about that much; deflation is, by far, the worse of the two monetary evils.

Because it goes straight to the workforce, devastating the labor markets. Businesses aren’t spared, obviously, but like anything else they pass along the negative consequences to their cost structure – meaning workers.

Thus, in the depths of a deflationary crisis it won’t matter if the central bank goes a little crazy. In fact, from the policy perspective, the crazier it seems the better off we all are.

And we can all probably agree that $900 billion in five weeks is at least theoretically in that realm.

But here’s the thing: if this is massive-scale money printing, where’s the inflation?

I don’t mean right now; it would take a little bit of time for that to show up in the CPI or PCE Deflator. Rather, there are very deep, sophisticated markets where all they think about is future inflation. Any chance the Federal Reserve’s overheating printing press creates that spark of price acceleration is going to show up right here right now.

Therefore, if the Fed just “printed” an absolute flood of new “money”, TIPS markets (and curves) would be all over it. But they aren’t. Inflation expectations are actually going the other way. 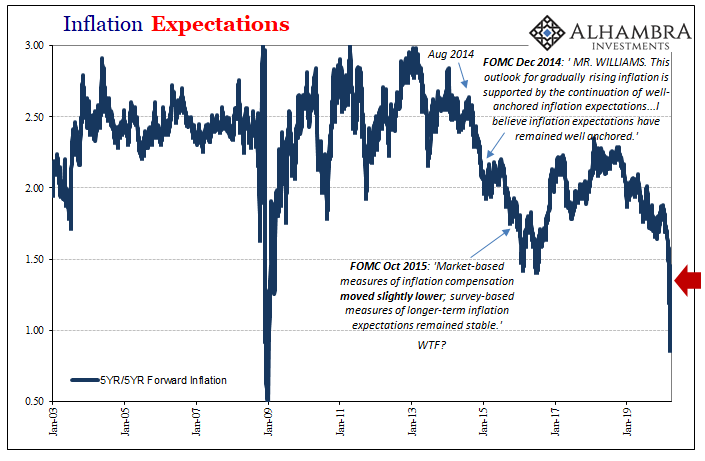 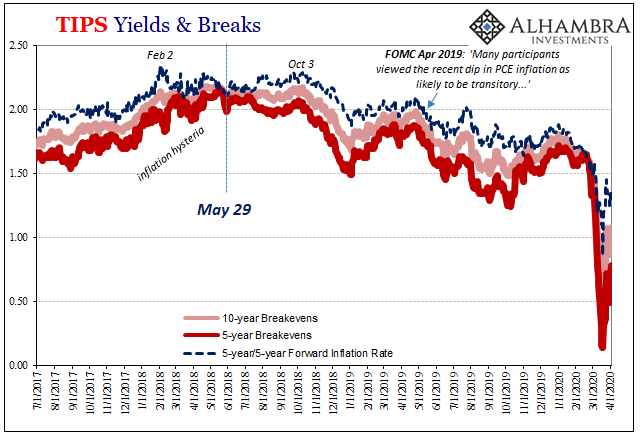 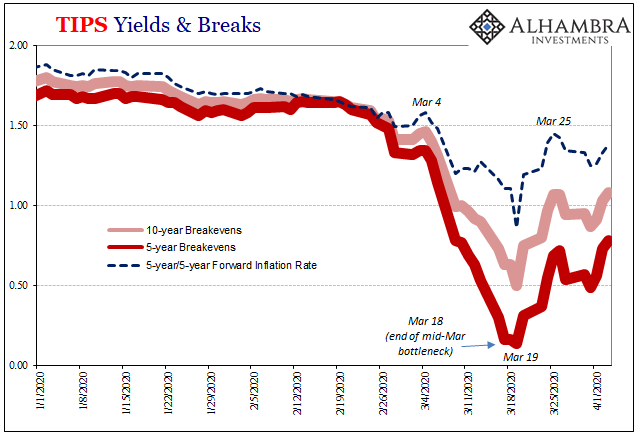 Even though expectations have come back a little from the recent bottom, that’s more about oil prices stabilizing than the $907 billion Fed tokens.

In other words, the market doesn’t see any inflation in the short run as a consequence of such irresponsible “money printing”, nor is it pricing the slimmest chance of even regular inflation (let alone runaway inflation) coming back any time soon. That’s right, the entire market is positioned for another lengthy period of the Fed grossly undershooting its target.

It’s a reality that has dawned on the bond market especially 2014 and after. It hasn’t hit the mainstream yet because Jay Powell is given the benefit of the doubt for no more reasons than his job title. Performance doesn’t matter, the whole financial press caught up on the logical fallacy of appeal to authority.

The guy may run the Federal Reserve, but it’s not like the Fed is a central bank.

Again, don’t take my word for it. That’s what these markets are all telling you. As the dollar continues to rise, propelled by a global monetary shortage that continues if pulled back once more into the shadows, no one is expecting much of the FOMC.

As my podcast colleague Emil Kalinowski likes to say, bank reserves are like laundromat tokens. They have a narrow money-like use, but that’s not the same thing as money printing, is it? If Jay Powell had coined $900 billion of those, would anyone outside of laundry operators be giddy? Of course not.

In reality, it’s worse; bank reserves are meant for the banks and yet it is these same banks piled into TIPS and the safest, most liquid instruments.

It’s not just current market positions that establish this important point. We also have the history of GFC1 to fall back on. Sure, Ben Bernanke patted himself on the back for being heroic and courageous, but we know the truth. It’s all right here, too. 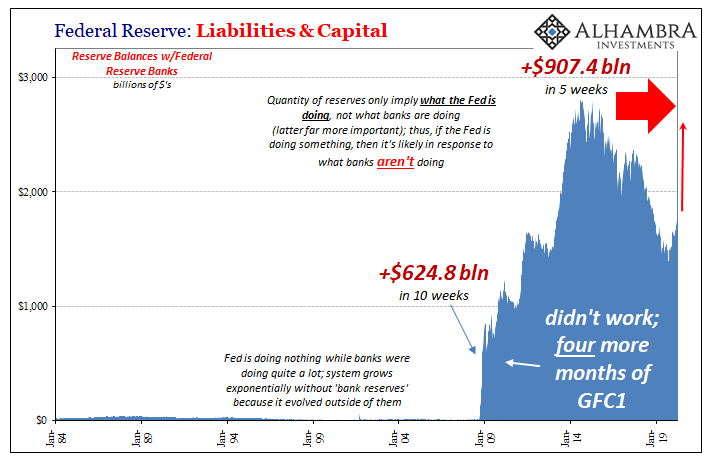 After that initial $600+ billion in bank reserves, and then $243 billion added on top (through January 2009), nearly a trillion in “money printing” late in ’08 didn’t solve that crisis, either. Along with ZIRP, Fed officials may have called it the era of “abundant” reserves but despite the abundance of laundry tokens the crisis would rage for several more months until March 2009 – another devastating wave of the dollar crisis producing the final leg in the banking crisis.

The Federal Reserve does not print money. They wouldn’t know how even if they actually wanted to. The global dollar system developed without a central bank. Jay Powell doesn’t even speak its language.

Our domestic banking authority only creates bank reserves, which actually serve a very different purpose than what’s advertised. They aren’t effective liquidity; what they are instead is a signal that the Federal Reserve is doing something big. And if the Fed is doing something big, that’s only because something big must be wrong in the monetary system it won’t be able to fix. 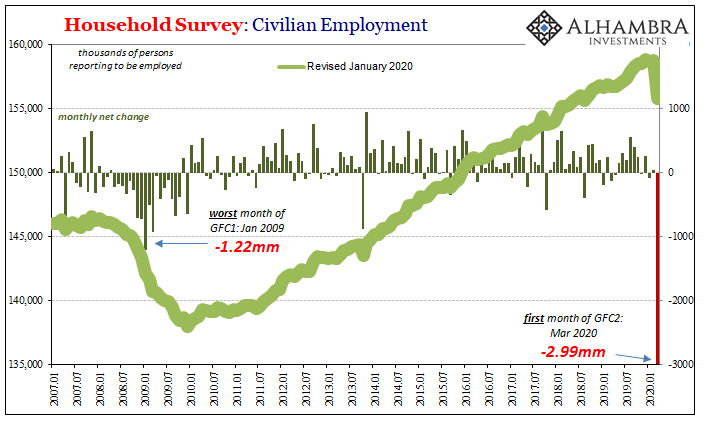 Quite perversely, then, a large increase in bank reserves rather than being inflationary it is actually cautionary! When that balance gets to rising quickly, you, and the labor market, know what’s coming; Keynes’ greater evil. It adds up instead to monetary deflation and those devastating effects on the economy, without even a smidge of inflation no matter how many hundreds of billions Jay Powell “prints.”

The bond market gets it. The labor market is seeing it, too, for the second time.

I don’t know for sure if Powell and the rest of them are fooling themselves, but they sure aim to fool you. That’s actually the whole point.

The world is demanding effective money, and these people only offer tokens at a puppet show. It explains 2008 perfectly. It explained the decade in between. And now, I’m afraid, it will explain not just what happened in March but what’s setting up right before us. 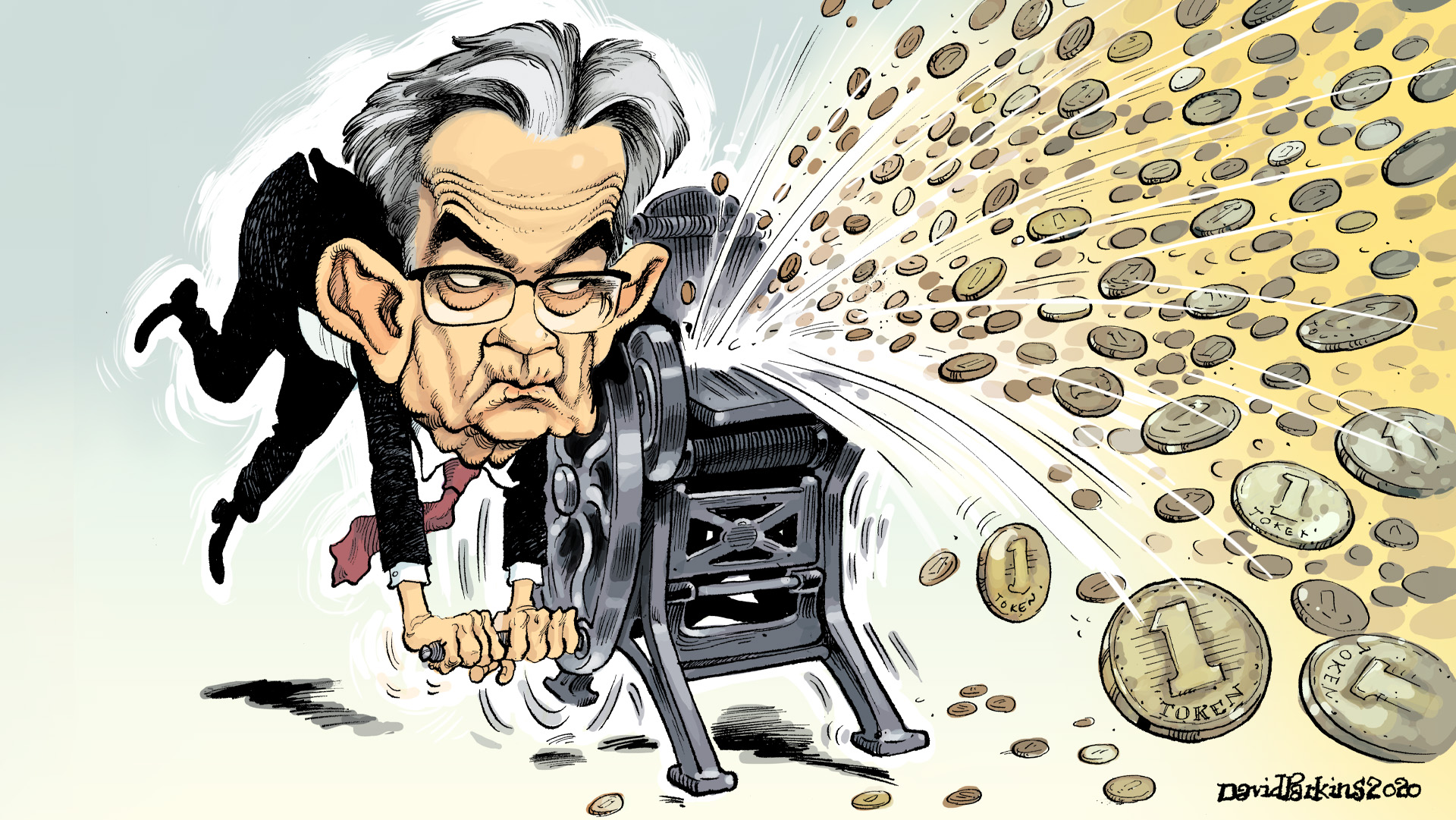