Way to go, fellas. The FOMC minutes for the crucial March 2020 meeting further make a mockery of everything the central bank should stand for.

Nowadays, the Federal Reserve is thought about in terms of its inflation and employment mandates. Nothing whatsoever to do with the monetary system, at least not directly. That’s the way they want it; officials can’t define let alone control money, so what else are they going to do? Make you think they can maximize employment with minimal inflation all by moving around one short-term rate from just outside the monetary zoo.

That’s the puppet show; everything else is just added characters or theater enhancements. Including QE.

This much was on full display in the first half of March. No matter the Fed’s move, global markets were lit up anyway. Until the mid-month, two-weeks-before-the-quarter-end bottleneck mercifully passed, the entire global central bank apparatus had been rendered helpless as a kitten.

The graphic details today spelled out neatly by those kittens:

Trading conditions across a range of markets were severely strained. In corporate bond markets, trading activity and liquidity were at very low levels, although not back to the low point reached in 2008. Market participants expected that actions taken to slow the spread of the virus could have significant effects on the credit worthiness of certain borrowers, particularly those at the lower end of the credit spectrum. Market participants also increasingly pointed to concerns in other segments of the debt market. In securitized markets, including those for asset-backed securities (ABS) and commercial mortgage-backed securities (CMBS), primary market issuance slowed, and secondary market trading had become less orderly, with money managers selling short-dated liquid products to meet investor redemptions.

Conditions in short-term funding markets also deteriorated sharply amid a decline in market liquidity and challenges in dealer intermediation. Over recent days, the premium paid to obtain dollars through the foreign exchange swap market increased sharply, and the volumes in term repurchase agreement (repo) markets dropped significantly. Issuance of commercial paper (CP) maturing beyond one week reportedly almost dried up at the end of the week before the meeting, and primary- and secondary-market liquidity for financial and nonfinancial CP was described as nearly nonexistent at a time when investor concern about issuer credit risk was rising.

Pardon my language, but what the hell do we pay you all for? Your job, Jay Powell, your real job is to prevent what is described above. The whole point of having a central bank is so that when a crisis erupts, as it is going to do, things don’t get out of hand. The minutes here illustrate how everything had gotten so far out of hand.

Including the Treasury market – which we’ll get to in a second.

Therein lies the problem; what if you don’t know a damn thing about the currency you’re supposed to supply?

Now it all starts to make sense.

But it’s even worse than it may already appear. People somewhat familiar with Economics might remember the concept of a backward-bending supply curve. Something like labor substitution or the Laffer Curve; where past some dis-equilibrium point an increase in the price induces suppliers to instead supply a lower not higher quantity, upending the most fundamental economic relationship.

Inelasticity is straightforward enough, I think. In money dealing, risk averse dealers sit on the sidelines as the price of money (the steep part of the what isn’t a straight line curve) rises. Under normal conditions, they’d be all over a significant increase in the interest rate (the price of generic “money” we’re dealing with here as an illustration). 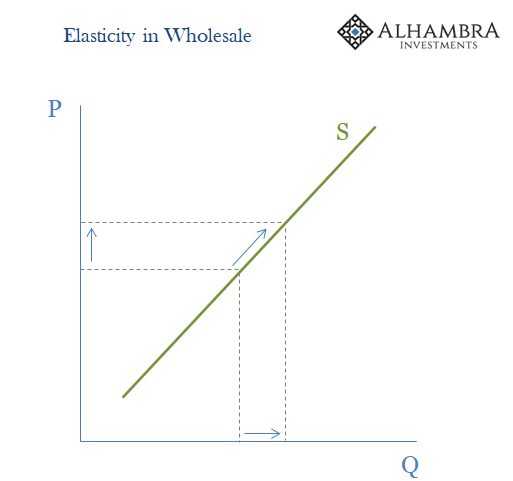 But we already knew from the last couple of years where fed funds and repo rates grew more and more elevated, and the worthlessness of IOER in that paradigm, that the supply curve must’ve been shifting more and more toward a vertical line. Finally, September’s repo trouble which showed, unequivocally, a pretty serious bout of inelasticity. 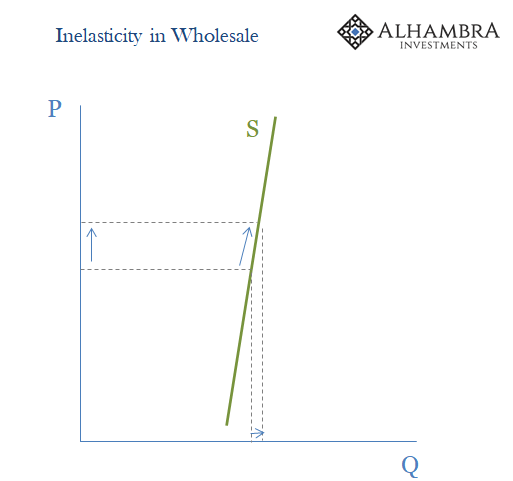 The whole point of the Fed’s “repo” operations implemented from the repo rumble forward was to create an on-demand outlet for dealers to accept Fed reserves as a substitute; to shift the supply curve outward in response to a rise in the price the dealers themselves weren’t willing to make. 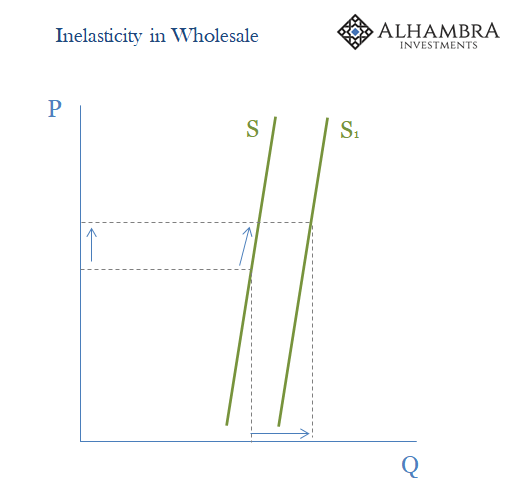 That obviously didn’t happen in March. Why?

If we think about the possibility of the situation for backward elasticity, what that would mean is as the price rises it induces even more caution among money suppliers (banks, not the Fed). The price goes up which has the effect of confirming everyone’s suspicions that things just aren’t right; that liquidity risks must be way, way too high. There was no price reward worth taking further risk.

Again, this is where the Fed and indeed every central bank is supposed to step in. To break the chain even in a highly inelastic supply curve and shift the whole thing to the right. Even if dealers were concerned about risk (the inelastic curve), they’d react at the potential for the central bank to shift the curve out to S1 (above). 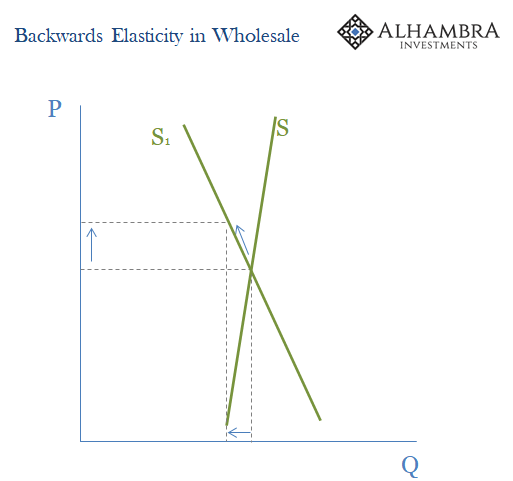 You can probably see where I’m going with this; if dealers didn’t believe the Fed’s offer of “liquidity” amounted to anything substantial, then the rising price of liquidity (as described above in the FOMC minutes) induces backward elasticity with no way out. The higher the price (of generic money) rose, the more it confirmed the horridness of the situation in one part because of the central bank’s helplessness and, I’ll say it again, irrelevance.

The self-reinforcing spiral takes hold no matter what small noises the kittens make.

One big reason why is, say it with me, collateral. Believe it or not, the FOMC actually provides some useful information in the latest minutes on that very subject:

I’ve tried many, many times over the years to succinctly describe an acute collateral shortage, and I dare say nothing I’ve ever written in my time watching repo and collateral markets comes close to that passage.

For those unfamiliar, on-the-run (OTR) securities are those of the newest vintage. US Treasury securities or others which were just issued; in the case of UST’s, just auctioned. They are the most liquid instruments available on Earth, and therefore highly prized as repo collateral (all bills are OTR, while only a fraction of notes and bonds are).

When the next auction takes place, the note or bond which used to be OTR becomes OFR (off-the-run). These are still perceived to be safe instruments, but not nearly as liquid (potentially) as their OTR counterparts – even in the same maturity bucket. When the chips are down, repo counterparties only care about the liquidity characteristics of the collateral being posted to them and nothing more.

When even OFR UST’s are no longer as acceptable in repo, and the collateral system begins to break down along OTR and OFR lines within the UST side of that market, when the functioning collateral list gets pared down to just OTR UST’s and nothing else (I’m overstating this, but not that much), it should go without saying that this would be an enormously bad situation.

Yes, everything I wrote about during the event. Thank you, Jay Powell, for confirming you should be fired on the spot.

Not that the FOMC knows what it wrote in its own publication; but the dealers understood very well what all this meant, the stark dangers the collateral bottleneck presented them. Thus, backward elasticity.

Over the past several dreadful weeks of liquidations the pattern has largely repeated. During the early morning hours, before regular trading opens, yesterday’s repo transactions are unwound. Under normal and even less-than-ideal conditions these are just rolled over.

Not any more. Collateral calls mean in some cases using gold as a last resort (which gets dumped immediately) and in others the buying of pristine collateral at any price. Gold is slammed while T-bill prices skyrocket, their yields plummet. For those unlucky enough to have neither option in front of them, fire sales of assets including stocks and other risk credits.

And the worst part is, these central bank Economists only included that passage in the minutes because they think it makes them look good!

So much so, it got to the point the generic money supply curve grew so inelastic it bent backward on itself. For an institution that’s supposed to be about elasticity, it could not have performed any worse. And if you know even a little bit about how the modern monetary system actually works, these minutes are incredibly damning.

These idiots, in addition to having been derelict in their currency duties, while busy congratulating themselves, they just wrote up and publicized to the world the very reasons they should all be terminated and the FOMC permanently disbanded. 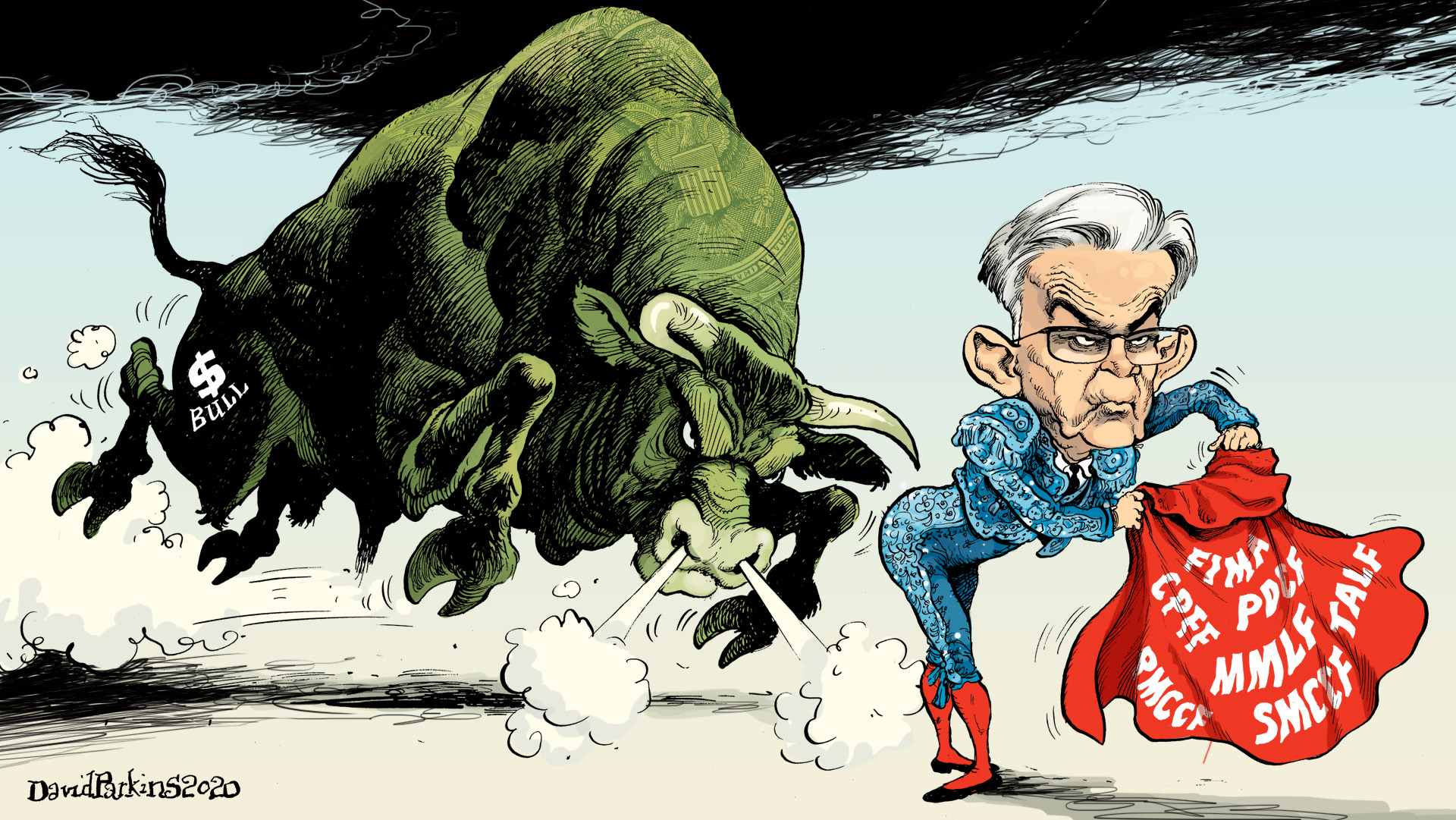