The Global Engine Is Still Leaking

The Global Engine Is Still Leaking

An internal combustion engine that is leaking oil presents a difficult dilemma. In most cases, the leak itself is obscured if not completely hidden. You can only tell that there’s a problem because of secondary signs and observations.

If you find dark stains underneath your car, for example, or if your engine smells of thick, bitter unpleasantness, you’d be wise to consider the possibility. There’s also the potential for the engine to overheat and maybe even visible smoke from oil burning as it leaks onto hot parts under the hood.

There’s also the dashboard oil pressure warning. But what if you have been taught to ignore it?

The longer this goes on the worse it can become – to the point your car’s engine might seize up and cease to function. Severe even permanent damage may follow.

If the signs of a leak become overwhelming, you can add more oil as a short-term stopgap measure. Most engines require between five and eight quarts of the lubricant. Should you find that it needs an additional quart to get back up to even, this would indicate a serious problem. Two or even three quarts?

Thus, the more oil you have to add the only thing that grows is your concern. You wouldn’t say you’re creating a surplus of oil as you do; you’d be worried that no matter how much you try to put back the issue, the real problem, lies elsewhere.

The analogy of an oil leak works well enough for our purposes, though in my view it gives the Fed too much credit. Why don’t I consider the central bank’s “money printing” to be money printing? For one, it’s the same sort of situation as an engine already missing a huge amount of its lubrication.

That’s what global eurodollars really are, the grease behind the globalized economic and financial wheel.

True to form, the Federal Reserve has ignored the rancid swap smell, the overheated curves, and the visible smoke emanating from the money markets. Even when the dashboard warning light came on way back last September, Jay Powell elected to react a different way.

Then the engine nearly blew itself up in March. 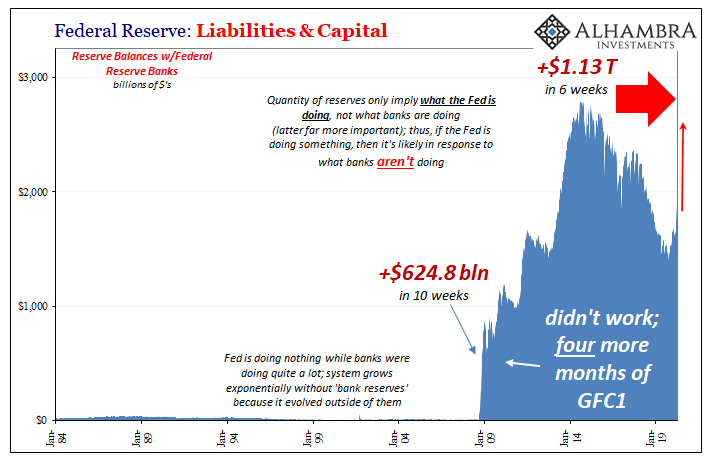 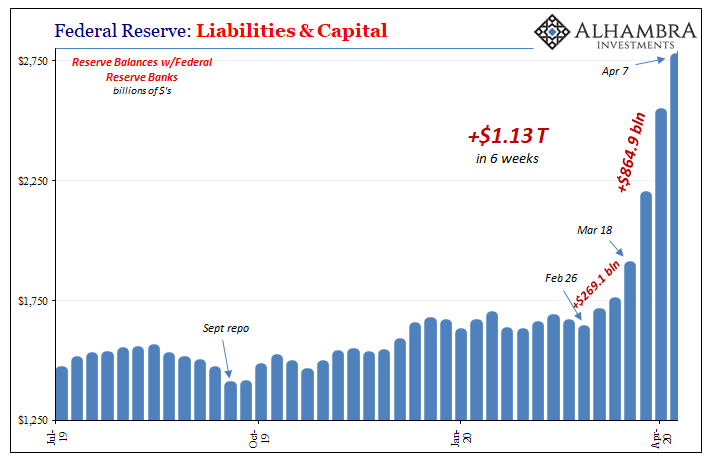 This is how you should view the Fed’s balance sheet from the most charitable point of view. The central bank isn’t adding more money to a static system already filled with it; like our engine analogy, Jay Powell is frantically trying to replace what has already leaked out. The more he puts in, the more the balance sheet is expanded, the more you know must’ve gone missing.

It’s a warning, not a solution.

Again, that’s giving bank reserves more credit than they deserve. A better analogy would be one where the Fed tries to put back a far less efficient and useful kind of lubricant to replace the highly effective, dynamic motor oil which had oozed and then catastrophically flooded out of the global engine.

And none of which solves the original problem – the leak.

This is where we are right now. For all the Fed has done since early March, rate cuts, ZIRP, unlimited “repo” operations, QE6EVA, rapid balance sheet expansion, the global engine is still dripping liquidity.

How do we know?

The same symptoms remain visible even after one of the most dramatic months in central bank history. For all that’s been done, nothing has really changed except the engine is somewhat operational again. The smell isn’t so bad, the smoke not quite as thick. The motor even seems to be running a little better (at least when compared to a worst case).

But the dashboard warning is still flashing.

Start with repo fails – they continue to be highly elevated, particularly considering the flood of cash management bills offered by the federal government’s deficit binge. Those were easily absorbed and still it looks like these maybe weren’t enough to satisfy the bottleneck (which is now proven and established). 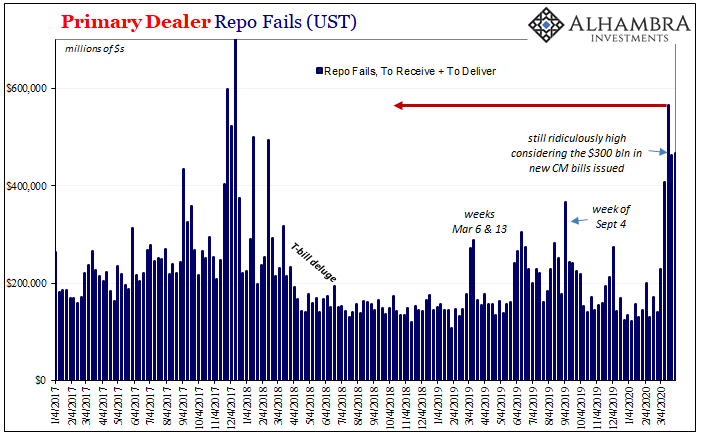 Taken together, these say the banks operating deep within the system remain wary about another wave of illiquidity; what happens when no one actually addresses the underlying oil leak itself, the engine therefore in danger of seizing up once again. 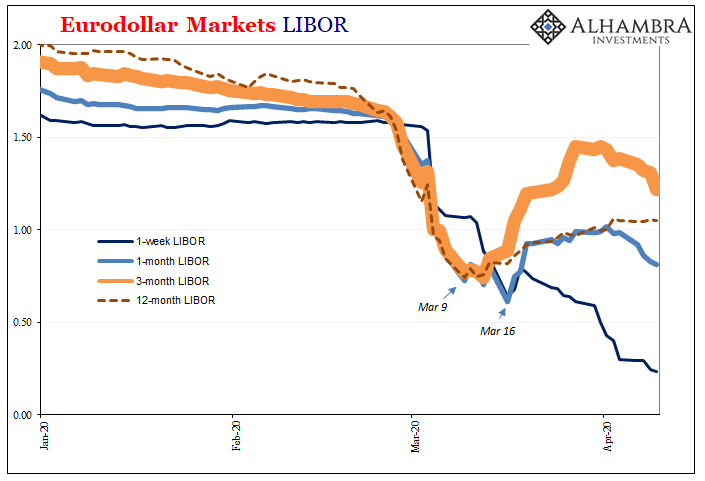 In global dollar markets, foreign official entities are still “selling UST’s”, though, given what we see in repo fails, all we really know is that they are disappearing from the Fed’s custody for use in some kind of workaround fashion.

Over the last six weeks, up to last week, an astonishing $161 billion have vanished, by far the most on record in such a short period of time. This includes, of course, the same period when bank reserves have skyrocketed – a great deal of that due to overseas central banks drawing down on the Fed’s overseas dollar swap lines and presumably the first transactions taking place via FIMA. 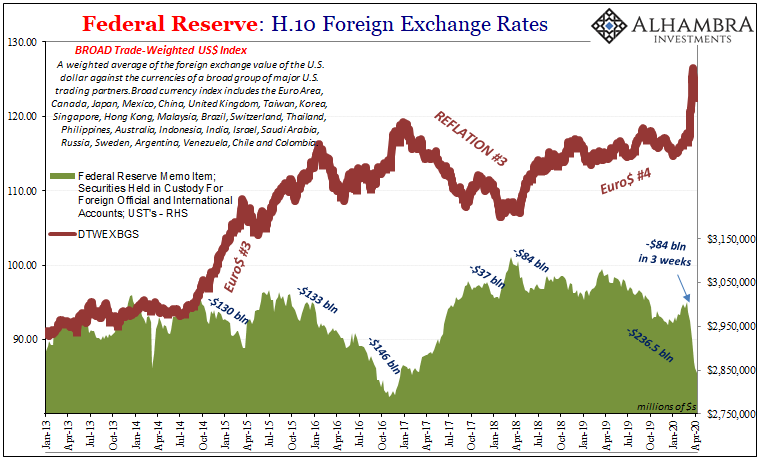 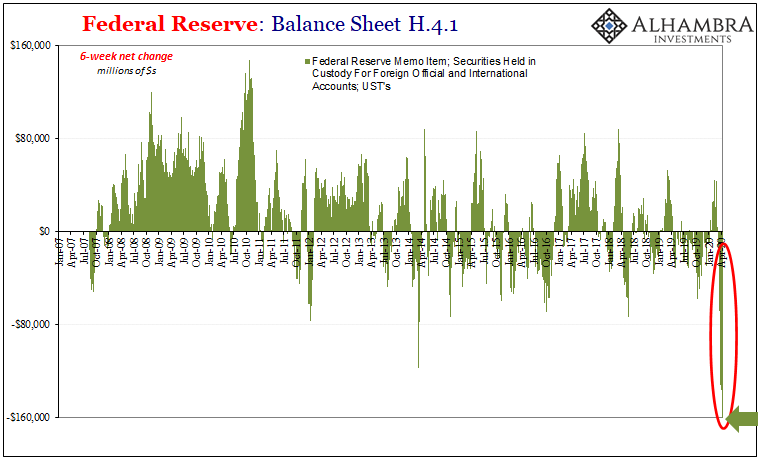 Like LIBOR, the dollar’s exchange rate is still elevated. From its devastating peak, lower only by a fraction despite (really because of) how much the Fed is doing.

The higher the Fed’s balance sheet, the greater the hidden deficit must be.

All of these are warning signs that the liquidity deficit hasn’t been topped off yet let alone the leak fixed. The world continues to be losing lubricant, the same warning signs (like curves) as before March. And that only means the risks of another engine failure remain.

If you went to a mechanic who told you to keep adding oil after all that’s happened to your car, to the point it verging on a total loss, at the very least you’d never go back and would probably consider filing an array of complaints.