A Crude Future View From The Crude Curve

A Crude Future View From The Crude Curve

Concerns about the economy have overtaken concerns about the virus. That’s the conclusion reached by a series of polls conducted at fivethirtyeight.com. According to their surveys, Americans remain very concerned about the pandemic to start with. Thirty-eight percent say that, up from about 18% back at the beginning of March.

In terms of the economy, 57% are now “very concerned.” That’s more than double the number from early March, and up from 22% in late February.

Add another near 30% who say they are “somewhat concerned” about economic conditions and almost nine and ten Americans are fretting the prospects for unemployment and the like – overtaking COVID-19 worries.

It isn’t just the nature of the economic shutdown, it’s what might come afterward. All else being equal, as Economists like to say, the stay-at-home orders would come and go as would the economic contraction. If that was all there would be for the system to weather, the whole thing wraps up in a few more weeks.

Sure, millions of American workers are hit with layoff notices, but before they ever receive their first unemployment insurance reimbursement they’re right back at work. A fading memory of short-term unpleasantness.

This would be concerning, of course, but to the point that near 90% are already in the losing sleep category? No, that’s something deeper.

American workers can tell that there’s the nontrivial chance the cure will be worse than the disease. The economy is being sacrificed for way, way overstated health risks. The coronavirus itself isn’t to be trifled with, and everyone lost to it an individual tragedy. But the number of those being seriously affected by it are turning out to be nowhere near what they were feared – several weeks ago, let alone from the beginning.

Then there’s the other matter of GFC2. Most working adults remember what happened after GFC1, and it wasn’t economic recovery.

In short, if all there was to it is the shutdown and nothing more, then this will turn out to be a steep but temporary curiosity.

While stocks are on the rebound still, in other markets more closely situated to the real economy and less intended for the entertainment of “investors”, you can see the long run damage already being priced in for the whole system. 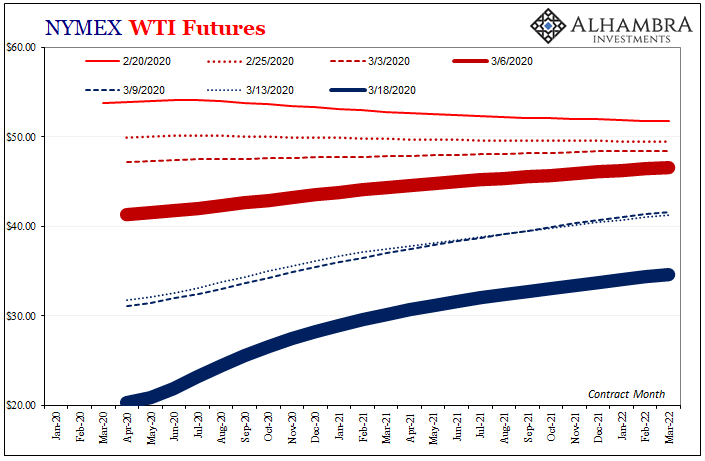 The bottom for crude was reached just after the mid-March bottleneck passed around the 18th. Ever since that point, most of the volatile action has in the oil market has been taking place right at the front – the total amount of contango widening dramatically and disappearing sometimes in a matter of days.

That’s the market trying to figure out just how much the short run economic closure will require crude pushed into storage. OPEC cuts, shale production levels, whatever, they influence the WTI curve mostly at the front.

It’s the rest of the curve which matters more, and the back end increasingly looks settled on less than $40 a barrel regardless of those supply factors. Rumored Chinese buying, too. 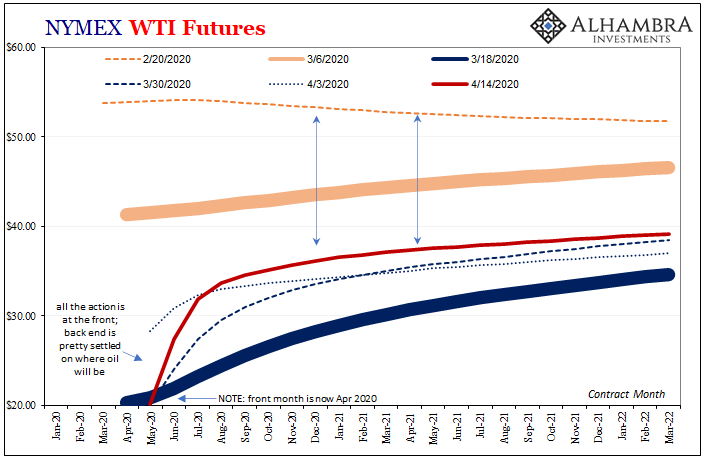 That’s an enormous difference for the intermediate term even when compared to around February 20 when all this trouble, GFC2, really started rolling. In that crucial medium range, that’s $15 less, meaning the oil market is thinking the system rebalances, with production cuts and all, at an incredibly low level.

What would anyone have thought last year about the global situation if they were told oil would be in the $30s throughout 2021 and right on into 2022? Nothing good.

Compared to where this part of the curve had been earlier this year, it’s night and day. GFC2 completely changed the fundamental characteristics of one of the most fundamental market views – the intersection between (euro)dollar liquidity, physical supply, and economic demand. 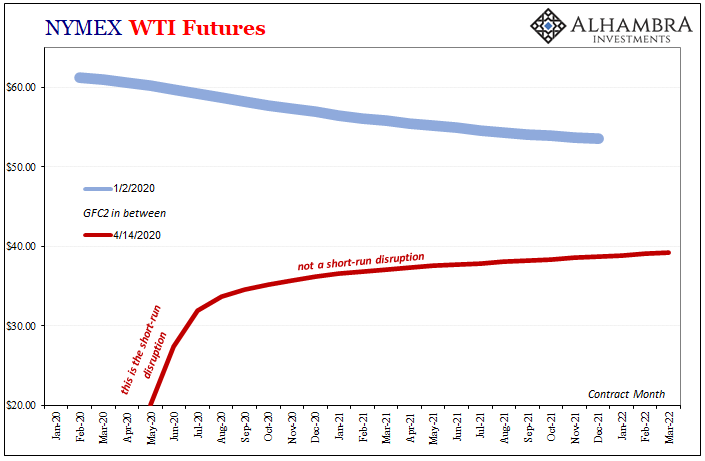 Even if the pandemic turns out to be as low as the current forecasts are suggesting, hopefully even better than them, it does not follow that the recovery from the response to the disease will go in the same way. In economic terms, the damage has been done – with almost certainly more yet to be experienced.

We still haven’t seen any of the second and third order effects from what will be perhaps 20 maybe 30 million unemployed? That’s how you end up with the overly optimistic Economists at the IMF hoping beyond all common sense and recent history for just a partial “V” recovery and not something (realistically) worse.

It’s not just the oil market, either, as bond curves like the crude curve remain collapsed no matter how high the S&P 500 and NASDAQ retrace. “L’s” turn out to be very risky and ugly. We’ve already been through this once and Americans haven’t been given any legitimate reason why this time will be different.

Thus, near nine in ten Americans are now concerned about the economy. Compared to the stock market, it turns out maybe there is decoupling after all. 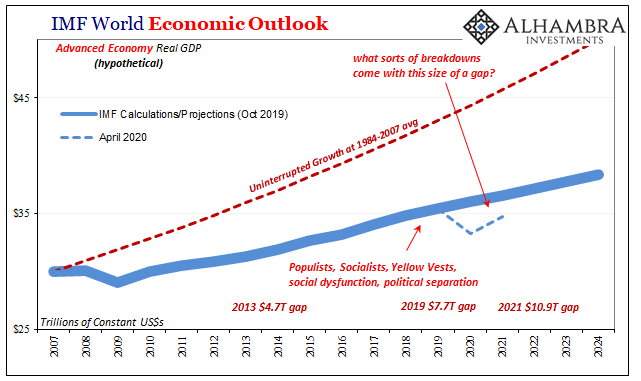