The Fallen Kings & The Bond Throne of Collateral

The Fallen Kings & The Bond Throne of Collateral

There is no schadenfreude at times like these, no time to dance on anyone’s grave. Victory laps are a luxury that only central bankers take – always prematurely. The world already coming apart because of GFC1, what comes next with GFC2 and then whatever follows it?

Another “bond king” has thrown in the towel. Franklin Templeton’s candidate for the title has been Michael Hasenstab, and like all the other Kings he’d been betting that interest rates would have nowhere to go but up. Bill Gross, Jeffrey Gundlach, and Jamie Dimon, Hasenstab, too, they all enthusiastically climbed aboard globally synchronized growth expecting the journey would lead to recovery, normalcy, and, yes, the BOND ROUT!!!!

Filings this week showed that the Templeton Global Bond Fund’s average duration — a measure of its sensitivity to interest rates — turned positive for the first time since 2017 in the last three months. A person familiar with the matter who asked not to be identified confirmed the fund has tactically unwound its short position on Treasuries.

It’s a significant shift for Hasenstab, who had argued that Treasury yields would climb above 4% given rising deficit spending and inflation pressures. The bet looked promising in 2018, before the Federal Reserve embarked on a new cycle of rate cuts. Stimulus measures to fight the fallout from the coronavirus have pushed yields even lower this year.

There’s so much wrong in that quoted passage, only beginning with being short the biggest UST rally in decades.

In fact, the bond kings and their negative durations (short position, effectively) aren’t so much the matter. Once they took them, these fund managers were only ever going to go on TV (constantly) and try to convince everyone of the wisdom doing so.

No, the real matter is why they ever thought it was a wise position. The Fed.

Central bankers began talking about globally synchronized growth and inflation but for reasons I can’t imagine people took them seriously. The Bond Kings all bet tens of billions on Janet Yellen and Jay Powell. Let that sink in.

Worse, they all did so despite the fact the bond market itself was telling them, pleading with the “kings”, not to. It’s the oddest thing, how all these bond gurus don’t seem to follow the bond market very closely (something about this being the most absurd business humans ever conceived).

The Fed just doesn’t have that much power or ability, which includes forecasting. When the models by which you offer your predictions prove worthless time and again, it’s gambling rather than science to expect them to suddenly get it right.

But that’s not what we are all taught. Despite the experience of 2008, the idea of monetary “accommodation”, “stimulus”, and “money printing” all survived. In the mainstream media most of all, certainly across the portfolios of the gurus, too.

The passage I quoted above is what they call gaslighting; and it serves the purpose of fostering this myth which both the media and “star” bond managers have perpetuated. The second paragraph makes it sound like the bond rally came about because Jay Powell changed his mind.

Bullsh$#. That’s not what happened at all. Powell was as clueless and caught off-guard just the same as Gundlach and Hasenstab. The UST rally began in November 2018 – while the Fed was still hiking. 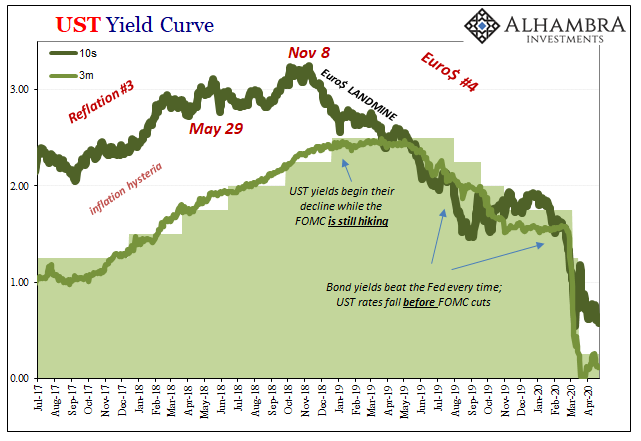 By the time Powell even hinted that the FOMC might “pause” its rate hike regime, in early January 2019, the 10-year bond yield had already shed 68 bps!

We are taught that the central bank is the master of all interest rates; that with the federal funds lever or some combination of QE’s everything about rates and yields is set by design in the hands of the “best and brightest” Economists. That’s the puppet show.

Reality couldn’t be farther from the truth.

The bond market is the Federal Reserve’s biggest critic, arguing against the very notions one Fed Chair after another utters in public. And it wins all the arguments.

What Bill Gross and Michael Hasenstab were betting tens of billions on with their negative duration portfolios was the bond market being forced onto the side of the Economists. Globally synchronized growth along with a busted federal budget was supposed to have done that.

None of them ever factor collateral.

While there may have been a small chance of moving in Janet Yellen and then Jay Powell’s direction, it was always in the shadows of the bottleneck. That was the flattening curve, fears over a liquidity break which refuted those inflation/budget pressures and then only started to become real on May 29, 2018. A date which neither kings nor policymakers took much notice of – again, despite the fact the entire bond market itself had.

The quote above also says that yields have fallen recently (“Stimulus measures to fight the fallout from the coronavirus have pushed yields”) because of the central bank, and this is why Franklin Templeton was finally, mercifully forced out of its short.

The collateral bottleneck long feared was proved, and then some, during March 2020’s GFC2; a global dollar shortage meltdown that Jay Powell was powerless to halt (just like Bernanke had been in 2008). The collateral case was on full display, the repo market front and center, its dysfunction and chaos completely overwhelming. The evidence unequivocal.

And it’s showing up in all these same markets again in April 2020. Only starting with bill yields. 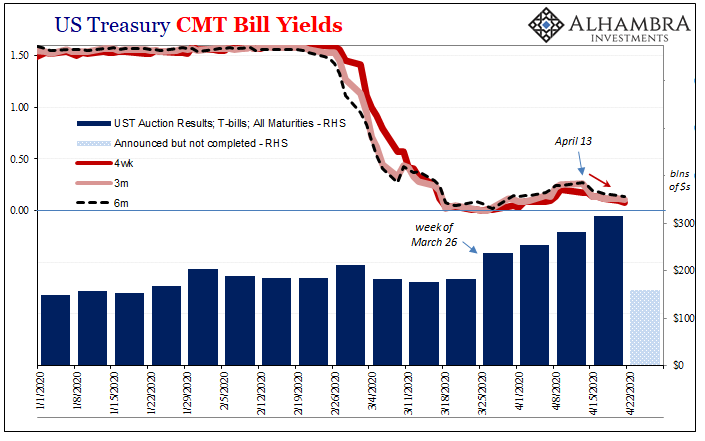 More bills than human beings can imagine have been auctioned off over the last month, and yet, despite one Swiss repo “guru’s” continuing claim that there’s too many of them, (he always says there’s too many because the whole world to him is a cash carry trade and nothing more; it’s like trying to fly an airplane with only half the instruments, fewer than half) the repo market can’t seem to get enough.

Unlike all the gurus, if you were actually paying attention to money markets during GFC2 in March you noticed how lower, not higher, rates were equivalent to chaos (LIBOR being the obvious and important exception).

Sure enough, over the last week or so as bill yields have been moving lower the GC repo rate is down again, too. Today, at times, the rate was even modestly negative.

Which has all the same people touting the Fed’s magnificent action. Long run UST bond yields down because of the central bank “bond buying” while money rates are lower as the system is flush with “cash.” 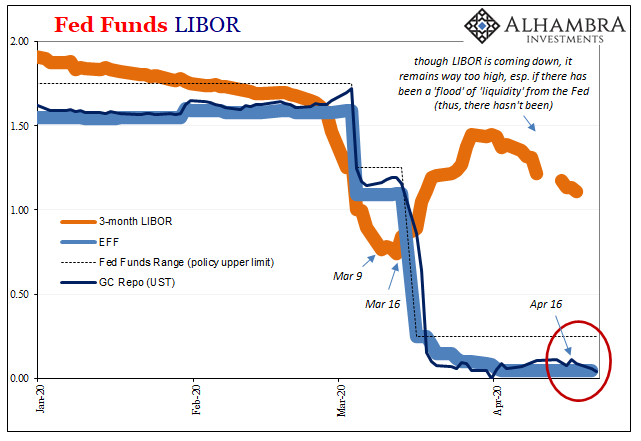 Completely backward. Totally wrong. Only starting with the repo rate, as I wrote during the crisis last month, on March 10:

It became so bad in repo collateral that this whole side of the market bifurcated further into OTR and OFR buckets, the latter being non-negotiable leaving even more interbank players stranded into fire sale liquidations. Collateral bottleneck in the extreme.

A very well established bottleneck no one will soon forget; everyone who actually works inside these markets and knows them well (thus, disqualifying them, apparently, from the title of Bond King) having experienced up close just how little the Federal Reserve does, how incompetent its leaders, and how much this corruption can lead to gross systemic failure.

The bond market remains the Fed’s biggest critic. How can it be any other way? Twice, now, in a dozen years, complete breakdown.

This adds up to more than just some investment critique. The fall of the Bond Kings is as instructive and illustrative as ever about how the system actually works, and why there’s actually no place for the FOMC in it. What did they all miss? The myth of central banks needs to die, quickly. Learn from them, world!

The consequences of this fact, yes, fact, hold for much more than portfolio positions. Our entire global economic system is depending upon this empirically disproved legend, therefore the gaslighting, the need to rewrite things to make it seem like the Fed is in control, and it’s more than just a bad bet. Trying to make money is one thing, watching these gaping holes which remain in the global monetary system rip everything apart again is beyond serious.

March, in essence, is not over.