If a central bank controls the money supply, then it can, in theory, control inflation. And if it accomplishes this feat through the use of a short-term money rate, then what part of bond yields would lie beyond its power? None.

That’s what bond yields are, after all, in theory the carrying forward of inflation expectations into the future built upon the foundation of short-term money rates. Since the Fed, for example, moves the federal funds rate around at will, and other money rates (used to) tend to follow along, then the entire yield curve is nothing more than a tool for central bankers to extend their influence deep into the financial system and therefore the economy.

It was from this premise that Alan Greenspan derived his famous 2005 “conundrum.” He said the FOMC was going to be hiking rates, therefore bond prices should fall far and fast, their yields skyrocketing in 25 bps increments.

Only, there was none of that. How were we to reconcile the ugly potential?

In February 2005 testimony given to the US Senate, the “maestro” put it this way:

This development contrasts with most experience, which suggests that, other things being equal, increasing short-term interest rates are normally accompanied by a rise in longer-term yields. The simple mathematics of the yield curve governs the relationship between short- and long-term interest rates. Ten-year yields, for example, can be thought of as an average of ten consecutive one-year forward rates. A rise in the first-year forward rate, which correlates closely with the federal funds rate, would increase the yield on ten-year U.S. Treasury notes even if the more-distant forward rates remain unchanged.

But what would happen if Greenspan’s “simple mathematics of the yield curve” wasn’t solved properly?

The St. Louis Fed branch, picking up on Chairman Alan’s conundrum testimony, also in 2005 yielded the frightening answer (from a policymaker’s perspective).

Or the scope may not exist at all!

But this thought, and all the grave implications surrounding it, are too abhorrent to the ideal of the modern central bank, fatal to the very notion of the Greenspan put and the presumed power in the Fed Chair’s hands. Thus, all of it, every last bit, has been rejected as unpossible. Not in the bond market itself, mind you, but in all conventional descriptions surrounding its behavior and expected future behavior.

Mainstream commentary today continues to accept the Greenspan version of things, even though the entire financial history from the moment he said it to right now has so thoroughly disproved the entire theory top to bottom. Reality is, and has been for a long time, nothing like the crap the guy tried to lay down in the halls of Congress.

This is why the mainstream always gets it backward; from yields to the economy, upside down; anticipating inflation and growth that has no chance of happening. The bond market commentators you see and hear in news stories floating around the internet, especially those who call themselves “strategists”, they start by parroting the Fed’s position and then seek to interpret nominal rates and curves from that official line.

If Jay Powell says he is hiking rates, series of one-year forwards, how can interest rates not go up? Guaranteed BOND ROUT!!!! And what are Bond Kings if not the highest-profile strategists?

The bond market itself, obviously, doesn’t give one fit what Jay Powell has to say. What actual traders and real strategists, rather than the ones you see on TV, do is often disconnected entirely from the bubble which surrounds central bankers and Economists (I repeat myself). Bond investors, mostly the big banks who really are the very printing press of legend, start by looking at actual conditions independent of the statistically derived thoughts of Fed Chairmen. 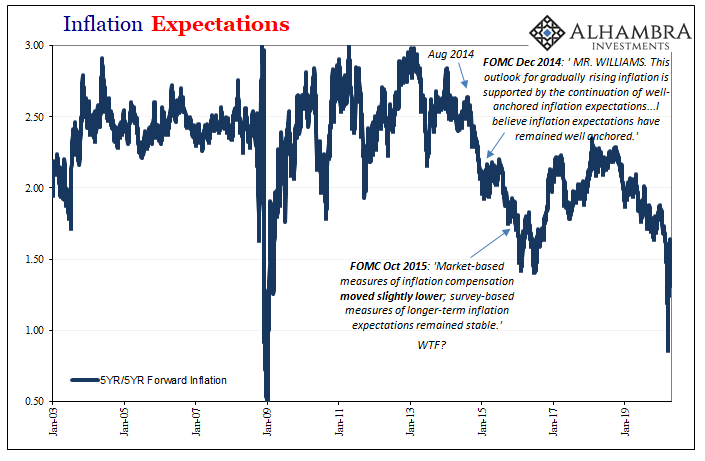 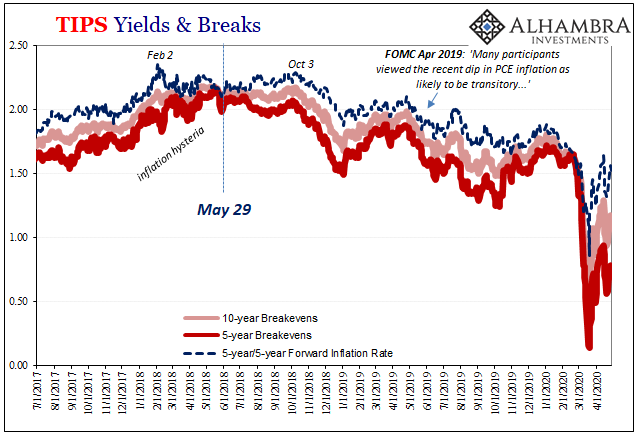 Thus, the gaslighting has begun in the wake of perhaps the biggest Treasury rally in history. Where bond yields were supposed to explode in obedient servitude to Jay Powell’s rate hike commands, they cratered anticipating, correctly, the world and real-world economic conditions we actually fell into. Globally synchronized downturn, and a bad one, long before coronavirus.

But to preserve Greenspan’s fantasyland, the cultists who cling to the idea and worldview today tell it differently; that no one could have anticipated this global bond rally, and furthermore since the Fed controls everything the rally itself must be due to the Fed’s rate cuts.

Never mind that falling yields predate Jay Powell’s 180-degree U-turn by three-quarters of a year, or that the rally began while Powell was still deluding himself, and Bond Kings, with his hikes; in the mainstream all that matters is the series of one-year forwards. The Fed says, the bond market does.

And if the bond market does the opposite of what the Fed says, then, they say, the Fed really meant to do what the bond market did before it realized what it was doing. It’s not even tortured logic, just pure torture.

They have it all entirely backward, which requires such mental gymnastics:

Bloomberg News’s Mark Cudmore also admitted that he and the Markets Live team missed the great year for bonds: “We never saw it coming.” He chalked up the miss to underappreciating what an intensified U.S.-China trade war would mean for the global economic outlook and being caught caught [sic] off guard by the Fed’s quick and nimble shift from raising interest rates to lowering them. [emphasis added]

The bond market told everyone throughout 2018 globally synchronized growth wasn’t happening, and that there was far greater risk of (renewed) deflation and downturn due to monetary breakage than there was of inflation and growth acceleration of the kind which would have (conveniently) vindicated the last three Fed Chairmen.

Flat and inverted curves all over the place by 2018’s end, guess who won that argument a long time before COVID-19? 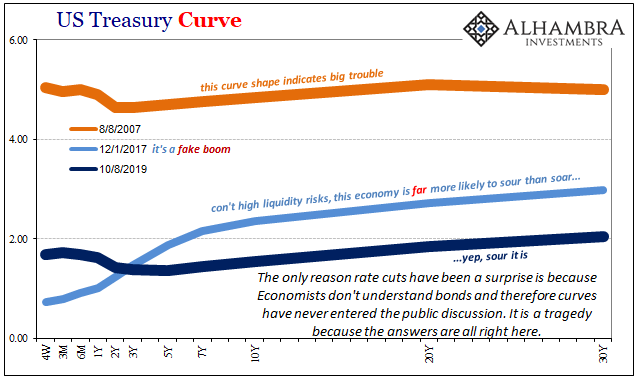 But what Mr. Cudmore over at Bloomberg tells you is exactly what I’ve written; he starts with Jay Powell and works from there. So, it’s not that “no one” saw the rally in Treasuries coming, only those who depend on the FOMC missed it. Since Economics has done such a poor job in education, look at how all these “strategists” are trained, you’re left to believe that there is only the one view.

There isn’t. The bond market is, and has been, the Fed’s biggest and most insightful critic.

Today, Cudmore adds still more color to the depths of his confusion; all of which traces back to Greenspan’s backward assumptions. They follow the “maestro” still because it’s comforting to believe there is a powerful Wizard of Oz, a competent, all-seeing technocrat rather than a clueless old man behind the shabby curtain.

Telling everyone the bond market has no signal any longer:

The only sure message from DM bond markets is that liquidity is abundant. Even the corollary that money is cheap isn’t always strictly true for everyone, precisely because what interest rate you pay on any loan is now far more dependent on who or what you are, rather than what the base rate is in the market.

So utterly upside down, he’s got the first sentence directly contradicting the second. As I wrote not all that long ago, low rates do not signify stimulus nor abundant liquidity, they often describe just this sort of monetary tightness and chaos. Abundant liquidity means everyone gets funding; lack of liquidity, which does show up in low rates, means that money dealers are being prohibitively discriminating. 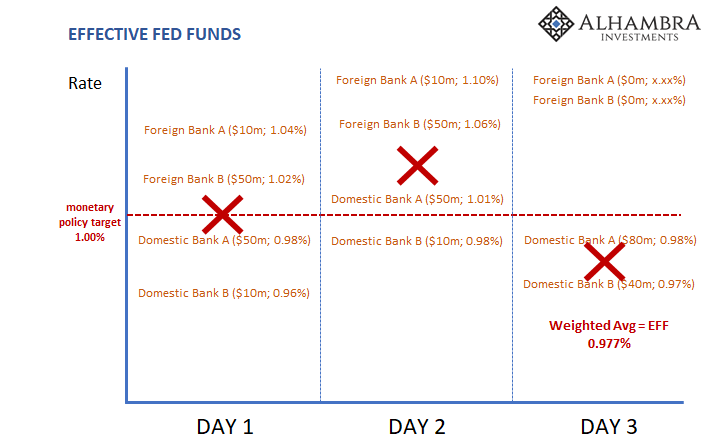 In other words, maybe the Fed doesn’t actually control short-term rates, either! Which is exactly what was proved during GFC1, and is being proved all over again.

Meanwhile, Bloomberg’s enlarged suite of writers want you to think the bond market still belongs to Jay Powell, and therefore when it contradicts his story, as it does right now, the “signal” it is sending must be worthless. Especially if the Fed is buying UST’s.

Here’s the thing: how would any of them know? They missed, and admit they missed, the biggest bond rally in history because they couldn’t decipher what were very clear, very obvious, very simple signals all the way back in 2018. Ignored them for all of 2019, too. That’s a whole lot of important ostriching.

And the reason they couldn’t decipher these signals was equally simple: the Federal Reserve cult. It’s an ideology that just won’t die. A historical curiosity, sure, but the real-world consequences are disgustingly enormous. And the devastating costs keep adding up by the year, by the month.

Series of one-year forwards? Only a central banker would think like that, and only a bond “strategist” would slavishly agree.

Jay Powell, whether he likes it or not, he goes where bonds tell him. Not the other way around and not because bonds control the Fed. Rather, the bond market understands money and economy; therefore it, not he, can tell you where things stand. Powell, like Yellen, Bernanke, and Greenspan, will eventually have no choice but to recognize, and respond to, what bonds had long before priced.