The monetary mouse. After years of Mario Draghi claiming everything under the sun available with the help of QE and the like, Christine Lagarde came in to the job talking a much different approach. Suddenly, chastened, Europe’s central bank needed assistance. So much for “do whatever it takes.”

Lagarde’s outreach was simply an act of admitting reality. Having forecast an undercurrent of worldwide inflationary breakout (how “globally synchronized growth” does seem like ancient history), the two years leading up to 2020 weren’t supposed to have been this way.

Draghi ended 2018 by ending his QE ignoring how growth had turned around, only to turnaround himself in 2019, like Jay Powell did on US policy rates, to restart it all over again last fall. Europe merely out in front of the globally synchronized downturn parade, the American economy located near the rear of it.

In her first major address as ECB President, last November Christine mouthed the words “much lower than previously forecast” with regard to Europe’s condition as well as its forward outlook. If only fiscal authorities would pitch in with reckless spending so as to reverse the direction, to “achieve [this] goal faster and with fewer side effects.”

So QE wasn’t the panacea. Central bankers liked to voice such things as disclaimers before proceeding to describe all the ways QE would definitely guaranteed certainly create conditions attributable to one. Monetary policy, Draghi or Powell would say, wasn’t by itself an effective cure but it would absolutely be effective at curing.

Nowadays, even the Germans are itching to be fiscally reckless.

It may be too late (as if fiscal “stimulus” is any different from the monetary puppet show). That’s the dirty little secret in all of this, especially 2017’s boom which bordered on criminal conspiracy and outright fraud.

Here, see for yourself just what I mean: 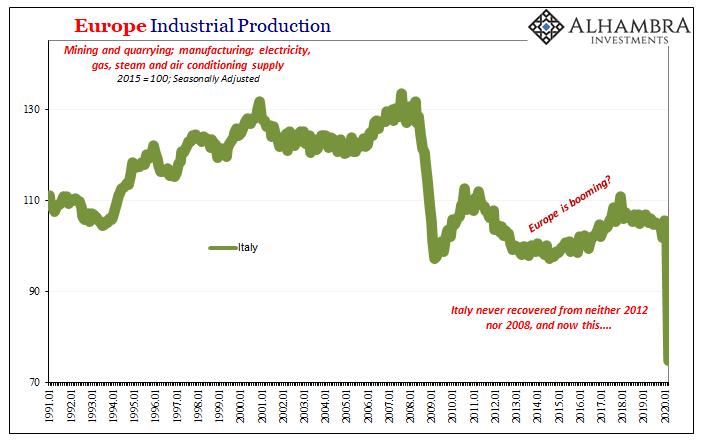 We’ll start with Italy because…there are hardly any words to describe this. When Italy like the rest of the world got caught up in the early 90’s recession, statistics say that Italian industry bottomed out at an equivalent index value of 104.6. At the lowest point way, way back a quarter-century ago.

After sliding for two years before COVID-19, the Italians got the worst of the shutdown in March. According to the latest Eurostat estimates, IP collapsed two months ago down by more than 28% year-over-year. That’s works out to an index value just less than 75, which just so happens to be 28% below the worst of the early nineties; a whole third less than the lowest point of the last three decades.

It’s probably been three generations since industrial output in Italy was this bad.

Shutdown, sure, but that’s not the whole story. You can’t close off a wounded economy like this and expect it to immediately come right back. 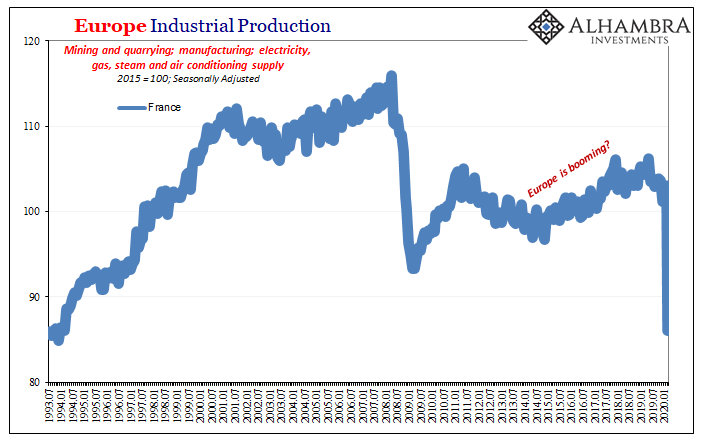 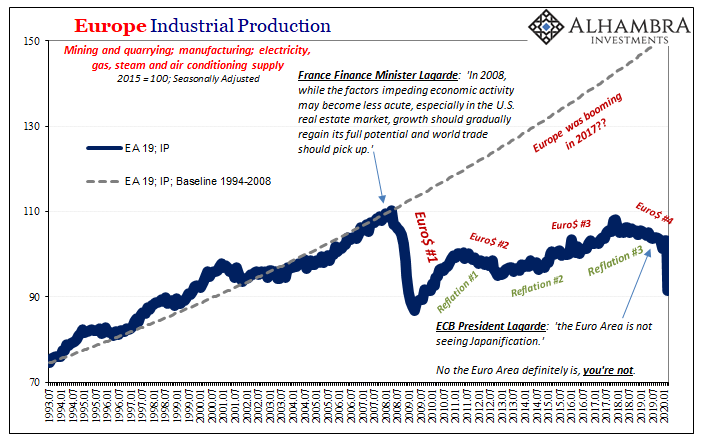 Lest anyone think this one problem child the lone exception to an otherwise really booming Europe before last year, Italy was merely the worst of the bunch all in the same rotten basket.

That’s why, long before COVID-19, Christine Lagarde was begging for a fiscal coordination. QE hadn’t made a dent in what had become a decade-long economic deficit, and then 2018 (Euro$ #4) turned 2017’s small upturn into yet another downturn despite Draghi’s ongoing “stimulus.” NIRP and all sorts of bond purchases, none of it relevant to the actual European economy. Keep that in mind right now and going forward.

The global economy doesn’t care about the ECB (nor any central bank).

We knew the data was going to be bad but it keeps surprising to the downside. This all matters because a weakened system before getting knocked out doesn’t just get right back up; it’s difficult enough for a healthy body to pick itself up off the mat after being KO’ed. Lagarde’s stimulus panic back in November a reality check for not just Europe and long before the world ever got this sick.

In other words, even the “V” everyone hopes shows up over the coming months probably doesn’t qualify under reasonable standards and definitions. Forget the more likely “L” for a minute, just getting back to 2018 it might take a miracle and another decade! Unfortunately, miracles aren’t exactly shovel-ready.

Sorry, Christine. Monetary policy doesn’t come with a money-back guarantee. It doesn’t have any money in it.