What Powell’s Not Telling You; Half of Jobs Already Lost May Not Be Coming Back Anytime Soon

What Powell’s Not Telling You; Half of Jobs Already Lost May Not Be Coming Back Anytime Soon

Time may not heal all wounds, after all. One thing it does do is clarify. There was a time not all that long ago when 20 million sounded absolutely enormous. How quaint today. At the end of March, initial jobless claims in the US were surpassing that unthinkable level leaving everyone to hope it wouldn’t get much worse.

Having blown through 40 million now, the real story is neither 20 nor 40. As I wrote what seems like ages ago, back on March 26:

The dislocation is upon us, but that’s no longer our major concern. Having been left no chance to avoid one, the only issue now is how quickly we get out from under it. If 20 million American workers maybe more are dispatched to the unemployment line in the weeks ahead, how soon do we get them back to work?

Just as important, do they all get a chance to go back?

Exactly. That’s the whole thing in a nutshell: do they all get a chance to go back?! 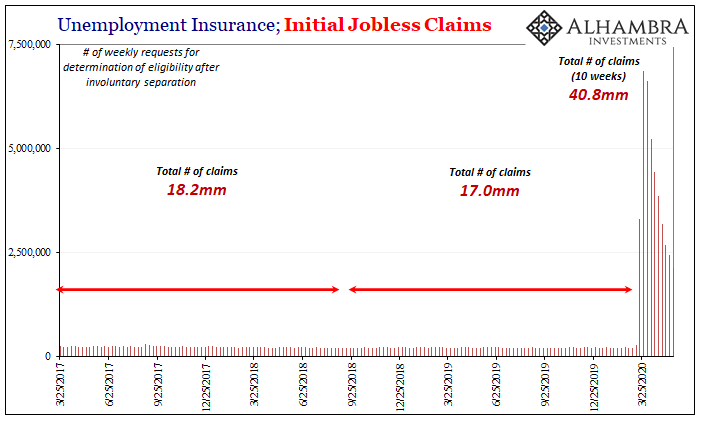 This is precisely the difference between bonds and stocks at the moment, though “precise” is hardly the best choice to describe anything. Jay Powell said the words “create money digitally” which the NYSE took to mean what never happens. The salivation began immediately upon hearing this particular bell ring.

The idea is simple if imprecise; stocks are a bet right now that over the course of the next few months the economy will show that, yes, as hard as it was to have 40 (and more) million jobs temporarily suspended all those workers will eventually be made whole. Business will go about being business in short order, the Fed’s magic money printing a key reason why.

And the reason Jay Powell made such a point of saying “create money digitally” on 60 Minutes is because he knows it’s all bullshit. Furthermore, Powell understands his easily influenced audience very well (the financial services industry). Distracted by a canard, the stock market isn’t at all appreciating the gravity of this traumatic situation.

And that’s just the version being told by these optimists like Powell and the CBO models. The best case is mind-bogglingly bad.

This explains perfectly why the Fed Chairman lied so much, as well as the bond market’s determined detachment from both “money printing” and the preferred recovery letter.

How bad is it? Let’s run through a pro forma exercise using those CBO projections. Why them? Because they are, again, an example of the best case. The econometric models being used to come up with these rough guesses already encode within them the success of so much “stimulus.” That’s what puts them in the optimist category; they calculate how Jay Powell’s done an awesome job and how they believe it will make a meaningfully positive contribution.

Despite what’s assumed to be terrific monetary “stimulus” alongside massive fiscal “stimulus”, the CBO projects that by the end of next year the US will have been hit with something substantially worse than the Great “Recession.”

And when I write this, I don’t mean the contraction right now – the non-economic portion immediately related to the COVID-19 overreactions. What these forecasts are saying is that over the intermediate term the US economy, and the labor market in particular, will end up suffering worse than it did during and after GFC1. 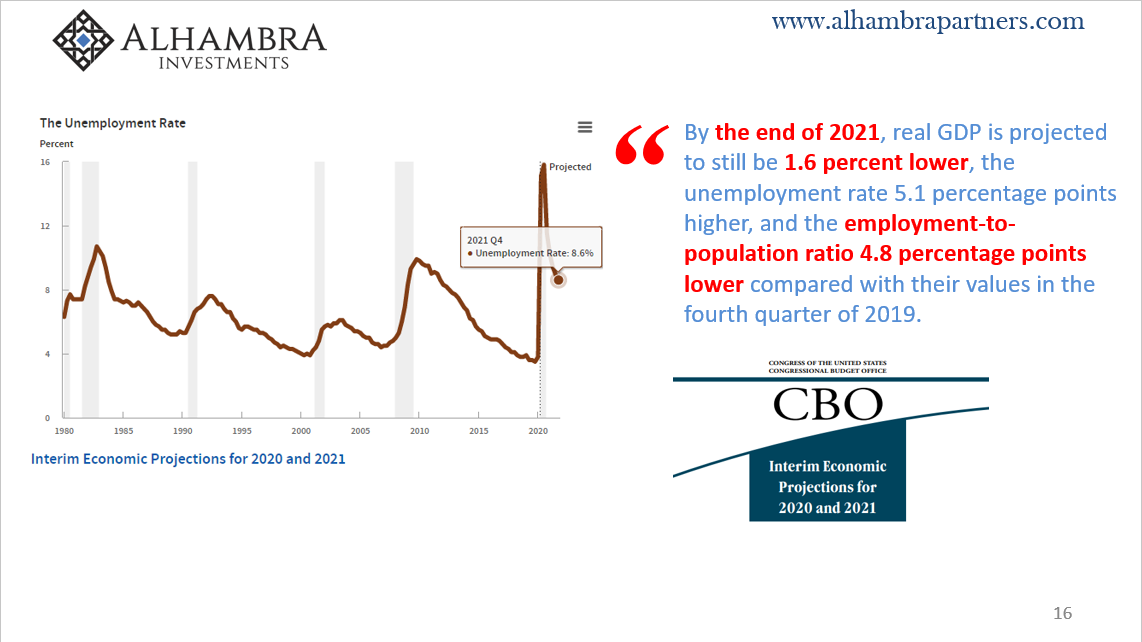 But in order to really appreciate this we need to put some numbers on it. These ratios are too abstract. Using the rough estimate of an 8.6% unemployment rate at the end of 2021 plus an employment-to-population ratio almost 5 percentage points lower than Q4 2019, hold onto your hats.

Assuming that the labor market bottoms out in May, which is no safe assumption, as jobless claims are ably demonstrating, the participation rate using this scenario leaves the labor market, as I wrote, in worse shape than the worst of it during 2009. 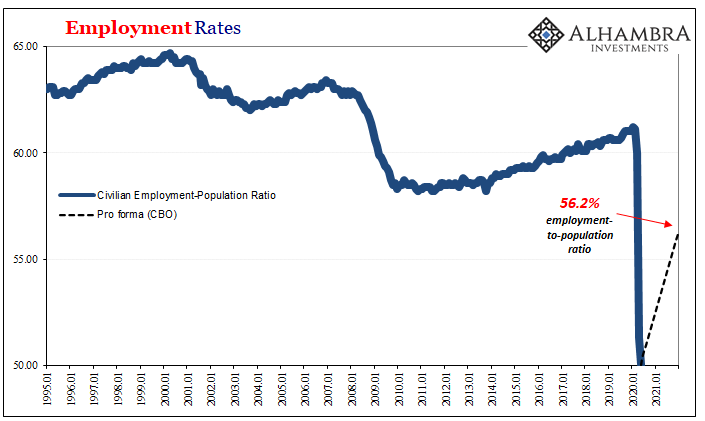 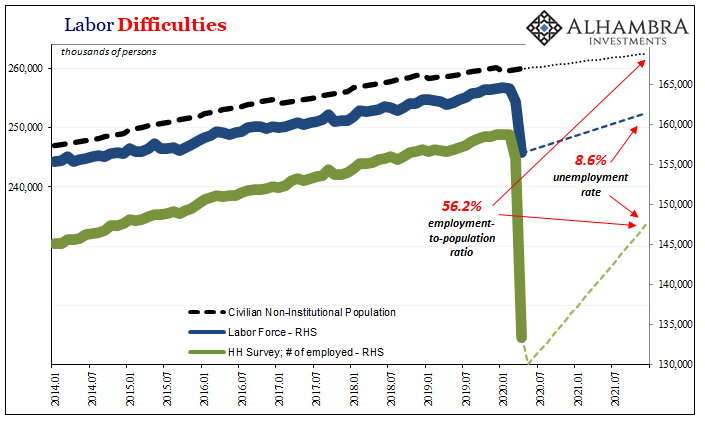 Now to turn these ratios into raw numbers of workers. Extrapolating conservative growth estimates for all three variables, including what might’ve been unbroken employment growth in the Household Survey of just 140k jobs per month average, the deficits are terrifying.

When you hear this constant talk of the “V” recovery, getting back to normal relatively quickly, the best growth ever seen during Q3, no one said anything about 19 million being left outside, unable to find any way back into the labor market, did they?

NINETEEN MILLION. As a best case, maybe half of the jobs so far lost not coming back for years, if ever. That’s what we’re looking at right now…if everything happens to go beautifully from here.

Five of the nineteen is those who have dropped out of the labor force altogether and, according to the CBO’s models, won’t even bother looking for work again. You’ll understand why in a second. 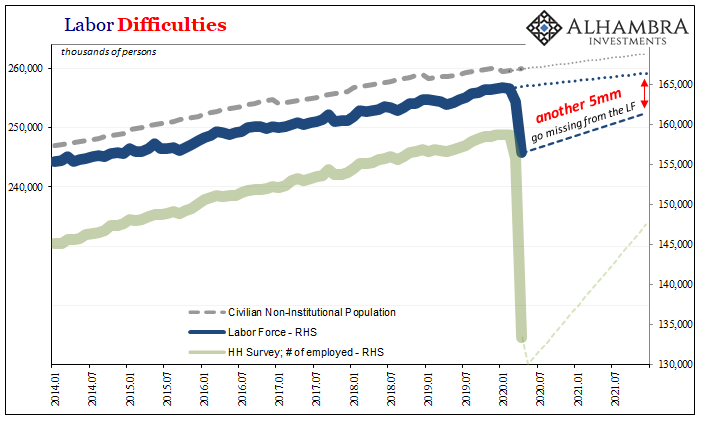 The combination of an employment-to-population ratio of 56.2% plus the estimated unemployment rate of 8.6% (which, by the way, leaves those 5 million above out of its denominator; more millions added to those already missing from the last time we did this) puts the Household Survey at ~147.5mm.

That’s barely more than what has been estimated for the peak…in 2007.

Don’t forget, these levels are for the end of next year. A year and a half of supposedly money-printed recovery, fiscal splurging feds, and we’ll be lucky to see 2008 levels of jobs entering 2022. 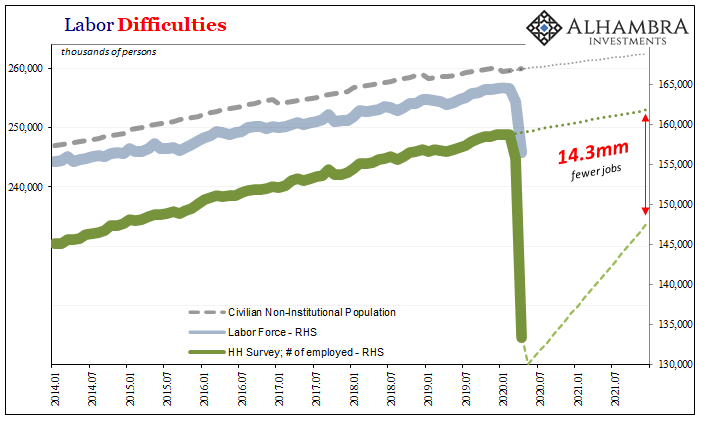 What the CBO, like Jay Powell, will add is that there is massive uncertainty with these figures. And that’s absolutely true. But, so what? Let’s assume that “stimulus” is even more effective than how it is being modeled, and that it cuts these labor market losses in half; which would still mean almost 10 million Americans left out of work nineteen months from now.

As it also would mean those tens of millions more who have already been laid off only slowly get back into jobs. This is not what they’re telling in their carefully worded, happy-times narrative. 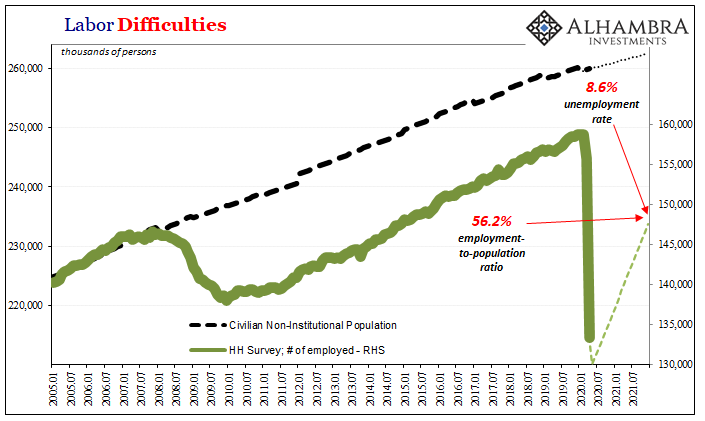 What Jay Powell has done, effectively at the NYSE, is to get people to believe none of that will matter; that by the power of magic words alone, the economy will be left to slowly, painfully heal without being further disrupted by the massive ramifications of all these things (second and third order effects).

If everything goes smoothly, record high stock prices signal back to normal (being 2019 normal, too, not 2005 normal let alone pre-21st century normal) sometime in the mid-20’s? This is not what the V people have in mind, and furthermore this scenario requires officials and authorities to thread the tiniest, slimmest needle just to get there.

In short, these best cases are themselves atrocious and replete with enormous risk(s). And that’s before ever factoring how these are so low in probability; the tails are all this presumed upside. The Fed is suddenly a competent, well-run money machine? By what actual evidence are we supposed to believe this? Certainly not history, including and especially recent history (see: late 2018).

All this disconnect, by the way, isn’t unusual; recency bias is a bitch. It quite naturally takes people quite a long time to realize the scale of such a gigantic hole (GFC1 still surprised the vast majority of the population when it took down Lehman and AIG halfway through the Great “Recession”). No one wants to believe something like this is possible, not in this day and age, and not with the mainstream myth of the technocracy.

That’s why I wanted to use “their” numbers and estimates. They’re out there saying everything’s going well and it’s going to be just fine if you sit back and let it; when, at the same time, their very own numbers don’t buy it.