ECB Doubles Its QE; Or, The More Central Banks Do The Worse You Know It Will Be

ECB Doubles Its QE; Or, The More Central Banks Do The Worse You Know It Will Be

A perpetual motion machine is impossible, but what about a perpetual inflation machine? This is supposed to be the printing press and central banks are, they like to say, putting it to good and heavy use. But never the inflation by which to confirm it.

If you have to use “stimulus” forever, can it be stimulus?

In a lot of ways, circumstances haven’t changed in Europe – only the size of the hole has. For the last two and a half years the European economy has been pointed in the same direction, down not up. Recall Mario Draghi in January 2018, just as Euro$ #4 had clearly broken out, remained steadfast that globally synchronized growth, the long-awaited acceleration end to a decade of disaster, was definitely in the works.

He just didn’t have any evidence for it. What he actually said at the time was:

Strong cyclical momentum, sure, but so strong it had “yet to show convincing signs of a sustained upward trend” for inflation. He knew only-too-well not one member of the media would ask about this obvious contradiction. These central bankers do like to bend the meaning of words.

It was the same old state of, “who needs evidence, just trust us!”

As a direct consequence, Christine Lagarde was left with a huge mess as she took over for the Italian. Europe’s economy rather than accelerating into Draghi’s fairy tale ending last year instead developed a clear case of contraction-itis. Inflation, by year’s end, the least of her problems but still her main target.

That was all before COVID-19, but in all seriousness all the pandemic did was amplify the trajectory the European economy was already taking. Same results, just bigger numbers now uniformly and deeply negative.

No biggy, Christine said in March. We’ll just do some more, a lot more money printing. The inflation, meaning accelerating growth, that will come. Trust us.

Indicators of inflation expectations have fallen and measures of underlying inflation remain generally muted. While labour cost pressures have so far remained resilient amid tighter labour markets, the weaker growth momentum is delaying their pass-through to inflation. Over the medium term, the increase in inflation will be supported by our monetary policy measures and the recovery in euro area growth dynamics. [emphasis added]

But, like Draghi, she then admitted she didn’t have any actual evidence for this latest promise of an inflationary break out.

Get that? Market-based estimates for European inflation had been tanking by early March as GFC2 “unexpectedly” showed up necessitating all these emergency measures being announced.

And knowing they were going to be announced, the ECB’s own models hadn’t budged! They didn’t show any inflationary pickup, therefore monetary support, leaving poor Christine to insinuate some positive effect because at least the models weren’t showing it to be worse like market-based expectations have been.

Less than nothing so far as evidence was concerned.

And that was then, what about today? The massive flood of money printing in March, April, and May, led to:

At least long run survey-based expectations haven’t been as bad as every other category? That’s the most charitable implication she can pull from nearly three months of “flooding” Europe with all this alleged “money printing.” The word flood seems also badly misused.

Suddenly, doubling the size of the PEPP (emergency QE; not to be confused with restarted PSPP which was the other emergency QE before the big emergency QE), as the ECB announced today, makes sense. It’s not sane, obviously, but you understand, being honest about things, why Lagarde would panic as she has done.

She, like Jay Powell, now has to commit even more to selling it. Lie like the wind, if necessary. So far, the sales job has been incredibly poor everywhere outside of the places equities trade. In the real world, especially, no one is buying this flood nonsense.

More to the point, quite horrifically the ECB models are starting to look a lot like their American counterparts. While central bankers talk up inflation at every opportunity, the numbers, even their numbers, are only seeing deflationary pressures building and perpetuating into the long run where they’ll do their worst damage. 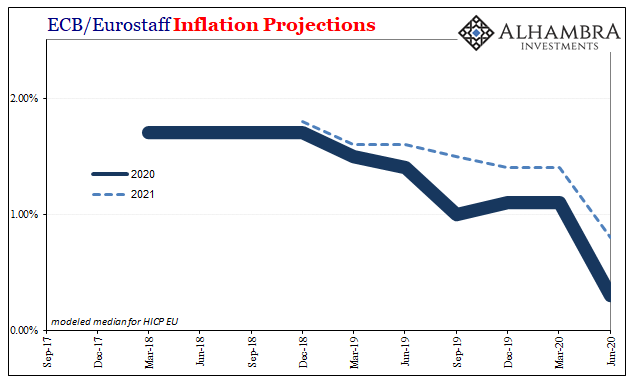 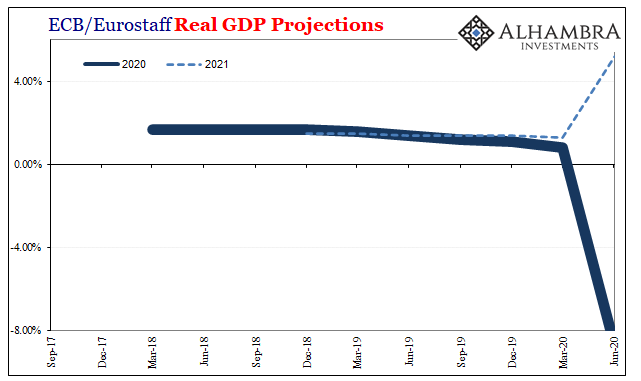 The first set of projections shown above are bad enough, but it’s the second set which should be, and probably are, terrifying to policymakers. Lagarde in June says her double-size QE will definitely, 100% end up being inflationary but like March the models don’t believe it.

These updated GDP estimates are one big reason why. The Eurosystem staff (which is responsible for the June and September forecasts; the ECB takes care of the March and September runs) projects that real GDP for all of 2020 will decline by an enormous 8.7%. For the whole year, almost double digits in reverse!

That’s not even the bad part, the real gut punch is what they’re looking as far as the rebound in 2021 (can’t call it a recovery). The raw number is positive, even massively positive, at +5.2%; which would technically be Europe’s best year collectively ever. And that’s the spin you’ll hear about endlessly once we get there (even before the end of this year).

But +5.2% following -8.7% is an absolute, unmitigated disaster. And, as I wrote above, it’s all-too-familiar given the projections that have already been put out elsewhere thinking along the same lack of recovery lines; including those by the CBO that I’ve highlighted recently.

For all the talk of inflation and monetary floods, they have to try to sell you on these because they know the (global) economy has been utterly devastated. Their “V” is no V at all, but they’ve decided the only way forward is to peddle this unsupported farce that it’s more than good enough.

Hopefully back to even by mid-decade isn’t what everyone has been told. Yet, even the mainstream models, those statistical creations which are preprogrammed to view “stimulus” as powerful contributions and amplifiers, they don’t figure what the world seems to be anticipating right at the moment.

How can anyone? There’s no evidence stimulus works, and when we’re looking at these absolutely awful numbers assuming that it does, what must be the real downside here?

Doubling QE in Europe is understandable if regrettable; not because it’s overdoing “money printing” in a way that’s sure to lead to runaway inflation and hyperinflation. Christine Lagarde may be thrilled so many think it could, but in the end even the numbers can’t be made to calculate those kinds of results. They’re intentionally trying to bury the headline, which is no recovery. Distract you from it by these big, huge numbers of otherwise useless nothing and promises for much more.

When you can’t fool your own models…