A Second Against Consumer Credit And Interest ‘Stimulus’

A Second Against Consumer Credit And Interest ‘Stimulus’

Credit card use entails a degree of risk appreciated at the most basic level. Americans had certainly become more comfortable with debt in all its forms over the many decades since the Great Depression, but the regular employment of revolving credit was perhaps the apex of this transformation. Does any commercial package on TV today not include one or more credit card offers? It certainly remains a staple of junk mail.

Leaning more and more on credit cards during the so-called good times only makes it more difficult during lean years. While regular folks are regularly chastised as to what from the outside appears to be fiscal imprudence, consumer behavior particularly around 2008 and after indicates the awareness of the risk.

According to the Federal Reserve’s data, series G19, revolving credit usage peaked in May 2008 at had been thought of as an unthinkably large $1.02 trillion outstanding. As the Great “Recession” further destroyed the labor market, that aggregate balance began to reverse until around December 2008 when it collapsed entirely.

Much of the central focus in this specific deleveraging has been related to the banking system and the more obvious methods interpretations of what must have happened: reducing credit via delinquencies and charge-offs. And largely that has made sense given the bank-centered nature of the crisis period.

However, post hoc studies have uniformly found that credit losses cannot come close to explaining the level of decline nor its persistence for several years after recession had officially ended. Subsequent granular studies have found significant, and significantly large, demand as well as supply effects.

Revolving credit users tend to stop applying for new credit balances, on the one hand vastly diminishing the demand forces underlying the “good times” impulse to obtain leverage. They also seem to initiate far fewer balance transfers as well as use fewer one-off lines while at the same time purposefully zeroing out and getting rid of any limited-use cards outstanding.

One such study published in 2016 by the Philly Fed branch reached what may be a startling conclusion. By far, the largest source of deleveraging (in the survey sample) had been due to consumers paying down outstanding balances.

Charge-offs played a much smaller role in balance reduction than did paydowns. In our data set, 27.8 percent of balances were charged off, while 72.2 percent were paid down.

Broken down by the details of each class of borrowers, nearly all of the charge-offs took place right where you’d expect – the riskiest of users. Among those in the opposite class, those with the highest credit scores and least number of consumer events, there were practically no charge-offs but balances declined by a substantial amount anyway.

The authors even found a surprising persistence in this behavioral change – surprising to them because they believed 2010 to 2013 had represented an economic recovery (Ben Bernanke said so). Consumers, apparently, weren’t nearly so sanguine about it and even the least risky group (who should have been first to notice and react to recovery) continued voicing their concerns by steadily paying down their revolving debt.

As discussed in Section II, many models of consumption suggest that consumers will accelerate repayment of existing debt balances as their expectations of the future sour. Interestingly, when compared with a postrecession debt cohort, the static sample of March 2009 accounts does not appear to have reduced its debt much faster…During that time, balances fell by 37.1 percent in the March 2009 static sample, just 2.6 percent greater than in a similar March 2012 static sample. This finding appears to run counter to theory, although it is plausible that consumer expectations of the future did not improve significantly from 2009 to 2010 and 2012 to 2013. [emphasis added]

Are low rates stimulus? In this area, at least, perhaps not at all or at least not by themselves.

So, while any meaningful increase in the delinquency and default process must be a factor, by far the most evocative interpretation is contained in that first sentence quoted immediately above: “accelerate repayment of existing debt balances as their expectations of the future sour.” That sure fits perfectly with the way the gross aggregate economy had itself behaved over the same period in question.

Massive decline followed by a limited recovery (mostly a halt to the decline rather than actual rebound). Even when consumer revolving credit did rise again, like the overall economy it did so at a very different (smaller) rate when compared with the precrisis era. 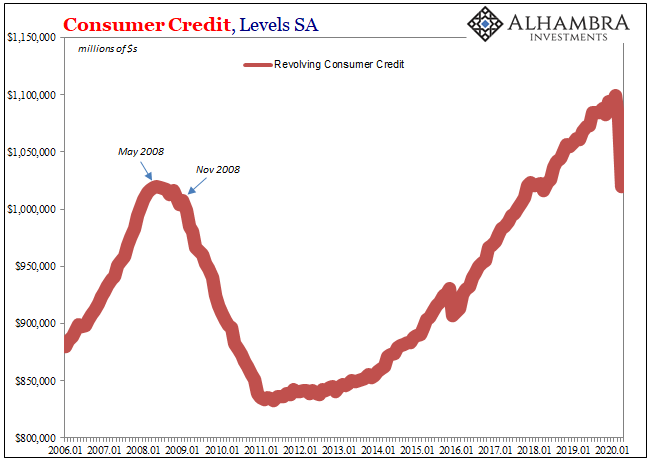 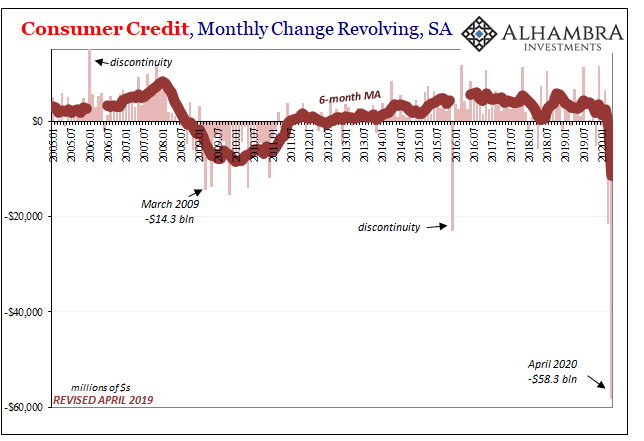 And now Americans have reduced their revolving credit by the most on record – shattering all prior records by a factor of nearly four. For March 2020, the level of change (seasonally-adjusted) was a revised -$21.5 billion followed in April when the total monthly decline was apparently more than $58 billion. For the record, that works out to an annual rate of -65%.

Unlike during the Great “Recession”, there can be no discrepancy this time as far as delinquencies and charge-offs go. In such a short period of time, there’s only been an uptick (just the start of what will be a wave) in the former leaving the system to deal with the latter over the coming months. This deleveraging has been entirely of the other kind, the widescale paying down of balances.

While it may be tempting to interpret credit cards as a matter of the shutdown, how consumers were largely unable to move about and use them at the mall which wasn’t open, this wouldn’t explain declining balances (just the lack of rising credit) and not at all the 65% annual rate to which they seem to have attained.

Second order effects, in other words.

Obscured by the huge number of workers unemployed for strictly non-economic reasons flooding back to the slightly reopened economy of May, consumer credit data speaks to that other far more important class; those who may be worried because they know this is no short run disruption. They haven’t been prevented from returning to work; they, or someone they know, has no work to go back to. 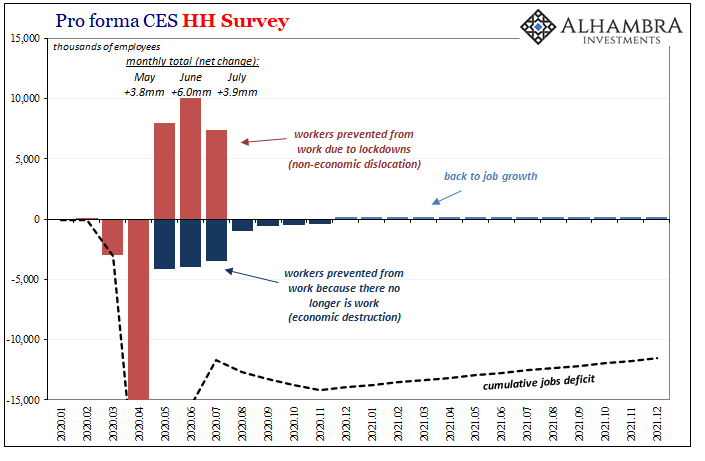 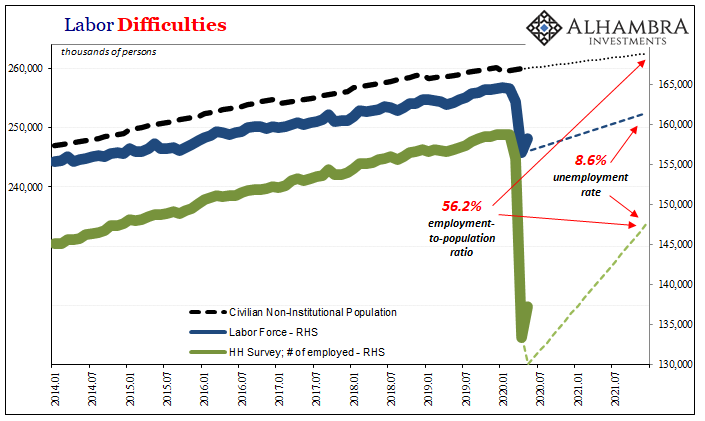 As we saw during GFC1, consumers don’t wait around for the current Fed Chair to say something else very positive while promising to do more, or for the next “helicopter” payment to take flight through the Treasury Department. They take an honest look at the economic condition and, if necessary, batten down the hatches regardless of where interest rates fall.