What The PMIs Aren’t Really Saying, In China As Elsewhere

What The PMIs Aren’t Really Saying, In China As Elsewhere

China’s PMI’s continue to impress despite the fact they continue to be wholly unimpressive. As with most economic numbers in today’s stock-focused obsessiveness, everything is judged solely by how much it “surprises.” Surprises who? Doesn’t matter; some faceless group of analysts and Economists whose short-term modeling has somehow become the very standard of performance.

According to one such group, China’s official manufacturing index, the one calculated and maintained by the government (via its National Bureau of Statistics), solidly “beat” expectations. The headline was thought to have declined from May’s 50.6 to somewhere around 50.2. Instead, the NBS reports it accelerated during June 2020 to 50.9 for a big upside surprise.

While the manufacturing PMI was that to the easily impressed (and surprised), the non-manufacturing PMI was a resounding joy. At 53.6 in the prior month, the bar was set down at 52.1 (or thereabouts depending upon which “consensus” the consensus gives consent). Beating the forecast by more than two and a quarter points, the official version for June is 54.4. 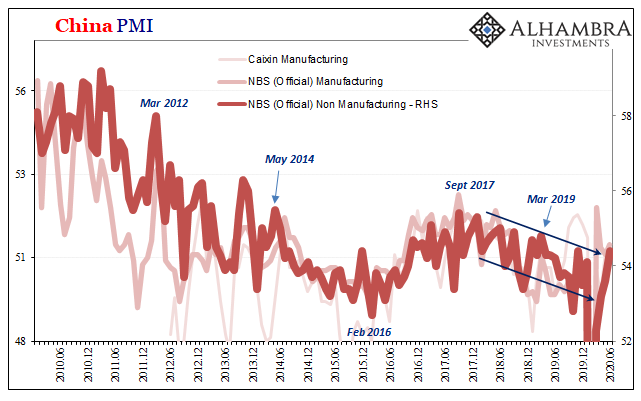 Given the situation in which the Chinese economy finds itself, no different from that of the rest of the world, there isn’t any meaningful difference between 52.1 and 54.4. Neither of those actually indicate what everyone wants to see right now.

Instead, these lower levels even though still above 50 indicate at best the economy bottoming out. Not acceleration. And that’s actually bigger trouble than it sounds since, going by the PMI’s as well as China’s official story, the non-economic shutdown ended months ago.

In terms of both China’s PMI’s, there was just the one month of the historic drop off (February) and then everything is supposedly moved back near normal. 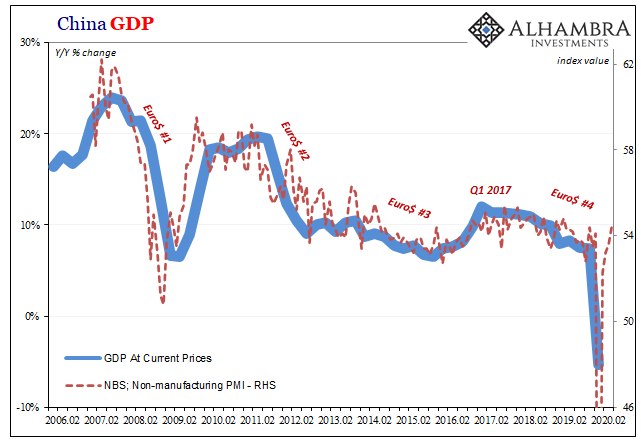 To show you what I mean when I claim that’s not what these PMI’s (nor anything else) are suggesting, we have to go beyond rates never forgetting that levels matter, too. In cases where there are sizable contractions, the starting levels matter even more.

All PMI’s tell us is whether there are more (>50), less (<50), or the same number (50) of respondents reporting growth. That’s it. So, if very few purchasing managers are telling the government they are seeing growth, then that’s consistent with a sizable economic decline.

Once that decline has finished, for whatever reasons, we should expect meaningful acceleration – what we (used to) call recovery. First, though, the economy has to bottom out, which in the PMI’s means a transition from sub-50 to more than 50. That by itself, however, does not mean anything more.

What needs to follow is that acceleration; if bottoming out is, after widespread contraction, the slight majority of respondents reporting growth then acceleration would be indicated when that small majority becomes an overwhelming one. Nearer everyone gets in on the upside.

In PMI’s, that means slightly above 50 isn’t nearly enough. 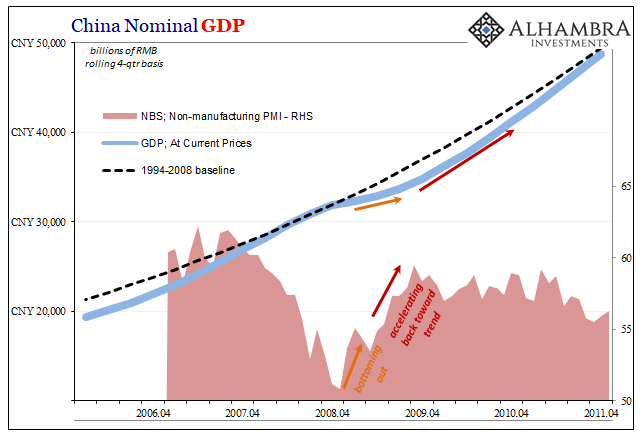 If we go back and review China’s experience during the Great “Recession” and immediately after, that’s just what we find. Using the NBS Non-Manufacturing index as our sentiment proxy, it had indicated a bottoming out in the first few months of 2009 as the trough hit worldwide.

That wasn’t the end, however, as in the last half of 2009 the PMI leapt toward 60 consistent with the kind of acceleration (a significant enough majority reporting growth) that in this instance had pushed nominal Chinese GDP back up toward its prior trend.

Recovery, for short. An actual “V” as opposed to those missing at the same time throughout the developed world; the key difference between mere positive numbers and real growth. 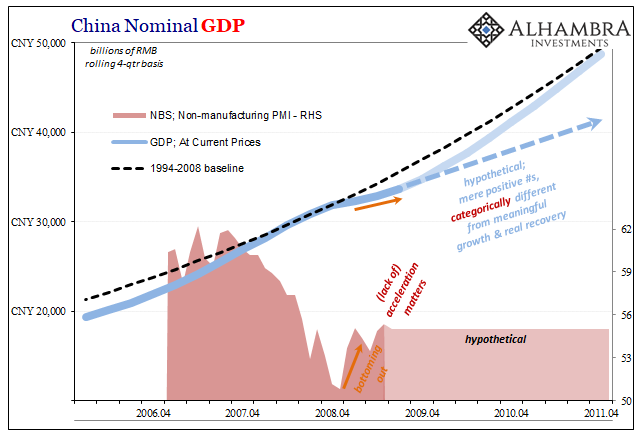 If that PMI hadn’t gone any further, still only a small majority of respondents reporting growth, that would’ve instead suggested a very different outcome in GDP like the real economy. No more contraction, sure, but falling short of acceleration and therefore recovery.

“L”, in other words. The recession ended, but the pain only beginning (which we know all-too-well).

In fact, that’s just we see in both rates as well as levels in China’s post-2011 experience. Following Euro$ #2 (despite the “flood” of liquidity which every media outlet excitedly reported), PMI’s fell back to where the number of survey reports indicating growth was only slightly more than those not indicating it; growth, but not really as it didn’t appear to be spread near wide enough. Thus, mere positive numbers.

Once that happened, in the lower 50’s for these PMI’s, the Chinese economy caught up to the rest of the world’s ongoing, QE-immune malaise. 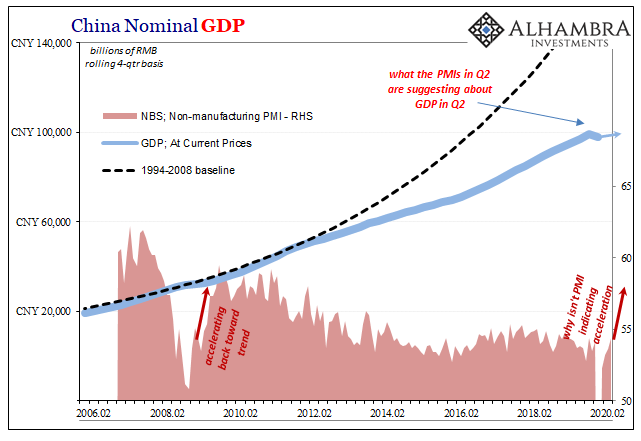 There just isn’t near enough growth indicated by anything less than 56 and probably 58 and 59 at this point in 2020. The level matters as much as the rate! You can’t just ignore the size and scale of the decline, and therefore how much we depend upon meaningful, widespread acceleration just to be able to pull back out of it.

And in this case, the fact that the economic dislocation was (allegedly) short and non-economic in nature only adds to the disappointment and intrigue. A true “V” in PMI numbers following that particular set of circumstances would’ve been up near 60 if not higher by April, May at the latest.

Instead, what China’s PMI’s (both sets) are indicating is nothing more than what the last US payroll report had showed – the global economy has bottomed out, and that’s it.

Vastly more important, we shouldn’t be left scratching our heads wondering where’s the acceleration. The fact that it remains missing is more “L-ish” than people are thinking, and are being led to believe particularly when, in mainstream convention, analysis consists solely of whether or not whichever number beat its consensus. Upside surprise and all that.

The only surprise here, to many if not most, is the decided lack of upside in these numbers.