Sign of the Times: Gold Has Its Most Vocal Proponents Helping Sell Jay Powell’s Fiction

Sign of the Times: Gold Has Its Most Vocal Proponents Helping Sell Jay Powell’s Fiction

Gold at $1800 an ounce has a lot of people you wouldn’t expect lining up in Jay Powell’s camp. What else could it be, right? Bullion is an inflation hedge, that’s what everyone says. Therefore, quite obviously, skyrocketing gold must indicate the dollar destruction gold aficionados are always predicting.

Unbeknownst to them, and likely to agitate the hell out of them when they figure this out, they are actually doing the Fed a favor. Powell is trying very hard right now to push up inflation expectations so as to ward off the deflationary circumstances we’ve already experienced. He’s flooded the Fed’s balance sheet with bank reserves from buying trillions in assets in order to accomplish this.

That’s massive money printing, they say. Therefore, guaranteed inflation. And by “they” I mean both Fed officials and goldbugs together.

But while the Fed has flooded its balance sheet, that doesn’t actually mean much in the financial system nor the real economy. The bond market, as I keep pointing out, refuses to get onboard simply because we’ve seen all this crap before. We’ve been bombarded with inflationary predictions since before the first US QE was executed, while the plan was still being written up.

No dice. Never happened. Inflation not only failed to materialize, the major inflation indices would fall into a prolonged slumber lasting just about five years. So much for the first round of massive “money printing.”

In terms of gold, however, a rising price actually has less to do with inflation (or falling dollar, if you like) than you’ve been told. Historically, gold has been a very poor inflation hedge. That’s not really why gold is bid, as I described during last August’s deflationary “recession scare” which really was a whole lot more serious than a scare:

In other words, even on the inflation side we have to qualify gold’s value as a hedge. It doesn’t protect against inflation shifting from one moderate level to another; say, from around 1% to 2%. Or even 3% and 4%. As is clear on the chart above, gold skyrocketed when inflation was pitching double digits – meaning an economic situation that had gotten way out of hand despite the “best” efforts of officials.

It wasn’t protection against the accumulation of small errors, it was in demand for the probability of the big one. And in the late seventies, even Congress had figured out that central bankers and Economists had no idea what they were doing. That’s when gold soared; when it was obvious to everyone but central bankers that central banks were failing.

This holds true even in the first decade of the 21st century; the last some Economists still associate with the Great “Moderation.” To most people, there was nothing moderate at all about the middle oughts, in particular. And that’s just when gold popped.

The metal had enjoyed its best run beginning around 2005 and lasting through the obviously not-inflationary Great “Recession.” That just so happens to coincide with first Alan Greenspan’s “conundrum” over longer bond rates that wouldn’t rise as he “commanded.” 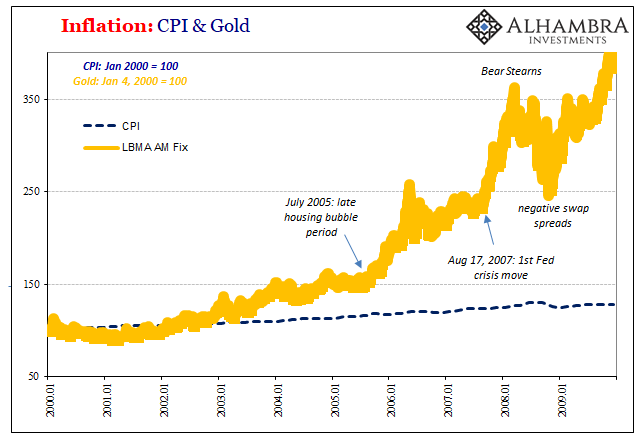 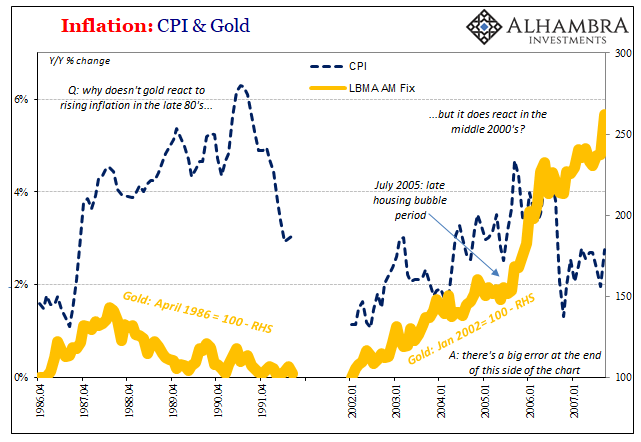 This coincidence wasn’t much of a surprise given that the opportunity cost of holding gold as a hedge against big errors (like a credit bubble bursting) is best illustrated by the yields of competing assets which similarly function as a safety (liquidity) hedge. In other words, lower rates, or, more precisely, lower implied future rates, the less the opportunity cost of using gold.

The demand to do so is likewise very simple, as stated in the quote above. If you think central banks are in danger of losing control – in either direction – then metal is your friend; maybe your best friend if under deflationary circumstances you’re thinking in collateral terms.

Gold has absolutely surged again beginning in late 2018. Of course, Powell and his FOMC models were predicting accelerating consumer prices at that time, but that can’t have been what drove gold substantially higher. Not only did the Fed have to abandon rate hikes intended to head off that predicted inflation, because it was never a real risk to begin with, gold followed along with lower and lower bond yields as monetary and economic risks (deflationary pressures) continued to rise. 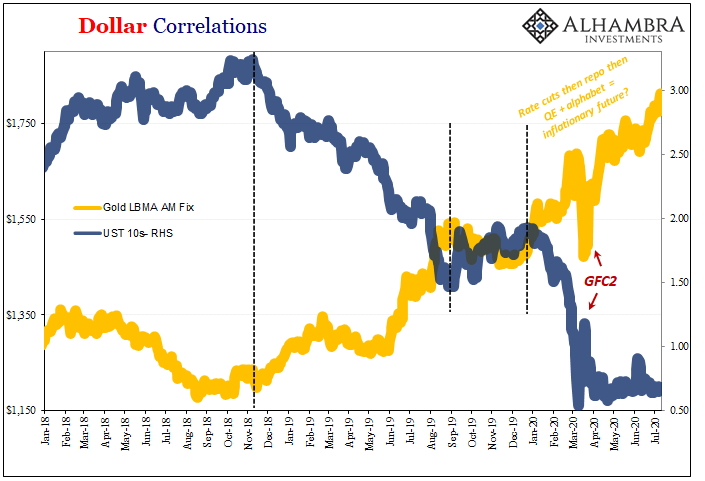 Gold, therefore, almost always falls in the same bucket as bonds. Has that somehow changed post-GFC2?

Of course not. As yields fall, with much of the curve nearing zero, and inflation expectations remain significantly subdued despite Powell’s flood myth, gold’s freer to shoot up the more it looks like the Fed’s lack of a real monetary flood will be a deciding factor in what comes next.

Greater chance of the big error; and not the inflationary one, as jobless claims continue to pile up by the millions.

To try to stop that from happening, monetary officials have to fool the public into believing the money printing story. Ironically, gold’s most vocal proponents, among the Fed’s most visceral critics, are actually helping Jay Powell sell his fantasy.

In this case, if there was even the smallest chance of an inflationary outcome gold prices would drop from here since that would indicate successful monetary policy (for once) moving the global system toward normalization where officials would be gaining some control over it. Unfortunately for them, and the rest of us, they don’t have any (see: 2005-09).

In the end, with gold back above $1800, it’s actually belying its biggest supporters. And that’s a real shame because their instincts to doubt the Fed are absolutely correct, and there heart is definitely in the right place. All they’re missing is what led the post-2005 rally, the same factor the Fed is always missing – potential as well as realized shadow money destruction.