A German Stall? Here’s Some Puppets!

A German Stall? Here’s Some Puppets!

It’s one of those things I wish I had more time to thoroughly investigate. What can these Germans possibly be thinking? While the ZEW sentiment indicator actually came back down a bit in July 2020 from its 2005-style perch in June, the ZEW for all of Europe actually went further upward.

Either that means Christine Lagarde has been successful (at something other than practicing politics) for the first time in her long public career (she was a successful lawyer previously, so there’s that and it explains a lot about her mobility), or something else is going on. I don’t think there’s any doubt that it is the latter.

History has shown, twice, how this sort of measured sentiment aligns way too perfectly with central bank activity rather than activity of the real economy variety. Monetary policies lead even the most business savvy leader to believe it will work – even after the numerous times it so clearly doesn’t. 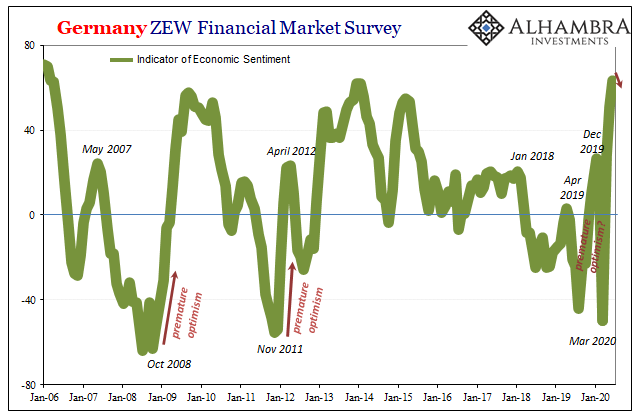 Sentiment had shifted sharply beginning in October 2008 when the ECB like the Fed was forced (by “unforeseen” global panic) to take things up several notches; only to leave Europe, like the rest of the world, with a further three quarters – nine more months – of the worst conditions since the Great Depression (to that point).

Then the LTRO’s in December 2011; which didn’t do much or anything for Europe’s economy which would continue to stumble around in a double dip re-recession until early 2013.

Jumping the gun is putting it mildly. In truth, this gets to be a whole other world. How can that be?

It does make sense, no matter how grossly unattractive and intellectually bankrupt. There is only the one kind of training in colleges and universities across the world. Economics wields its iron-fisted grip on all levels of study. Sure, a passing mention or two of Hayek here and there, typically derisively, but by and large Keynes fills out the majority syllabus polished off with a heaping dose of Chicago-style Friedman Positive Economics and econometrics.

Thus, those who take any course in Economics have drilled into them the simple programmed routine intended to last their whole career: If CENTRAL BANK = ACTIVITY, then STIMULUS.

That’s the part that I would really love to deeply investigate; how does this myth continue onward unchallenged especially in this ZEW survey of the top levels of German business. That’s clearly what’s going on, in contrast to conditions on the ground (see below).

Even now. As I mentioned earlier where Japanese surveys come in (the Jibun isn’t the same thing as the ZEW, so keep that in mind), there’s nothing like this discrepancy. You can use the Tankan or others which go back further in time, or the Cabinet Office’s which are more like the ZEW, but they all leave you shaking your head at German “business sentiment.” 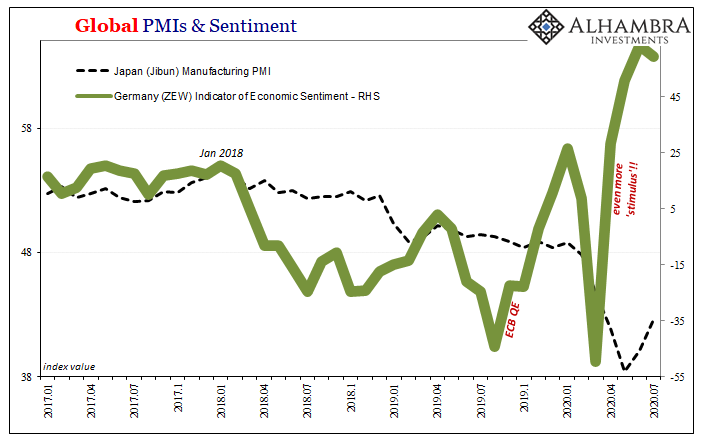 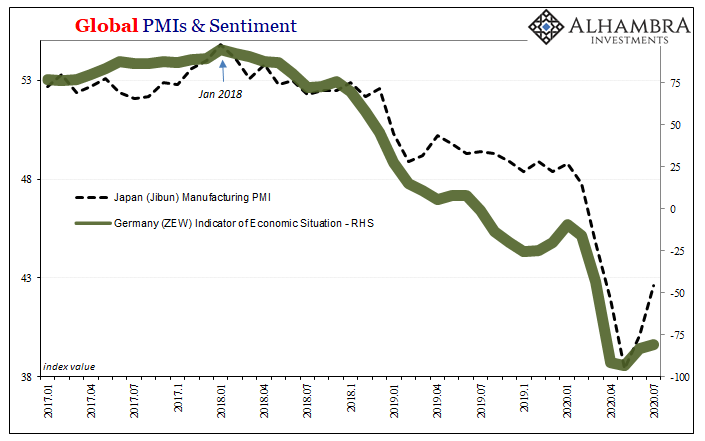 Perceptions about Germany’s current conditions are very different, even though these are drawn from the same people who also say they’ve totally bought Christine Lagarde’s promises. Doesn’t matter one bit, apparently, how up through July she’s not delivered on them!

In fact, comparing the possibility of the rebound stalling in Japan, as noted earlier and what it might portend worldwide, with the possibility of one in Germany, indicated by the ZEW’s situation numbers, one is left with the distinct impression of not one but two bellwethers sounding a very serious global economic alarm that gets obscured if not completely overshadowed by…what, exactly? 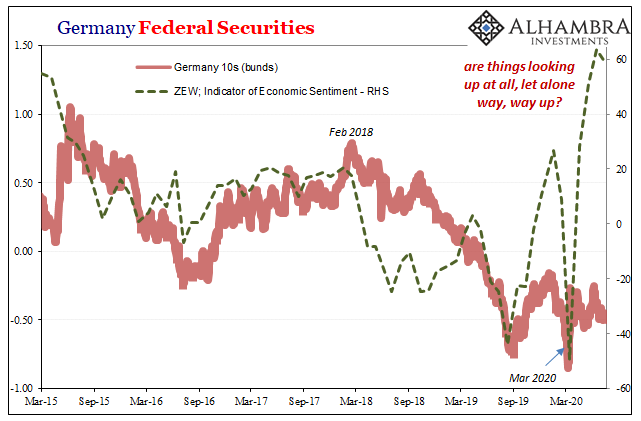 Everyone sees the ZEW sentiment and it follows the mainstream myths of powerful central banks effectively wielding pure technocratic tools to great effect. When in reality, for at least two times in the last dozen years, and more and more it looks like a third time, consistent with what Japan’s telling us about right now, it’s all just a stupid, mind-numbingly lame puppet show.

And Germany’s top corporate officials absolutely love it and can’t get enough of it. SMDH. Such gross stupidity at the top, maybe there is such a thing as end-stage capitalism after all. Just kidding, there isn’t, but until this sort of thing finally dies you can at least see why way too many people have become sympathetic to the idea.