Back in July 2018, even before, we began hearing (constantly) about how the yield curve and especially the 10-year note was no longer a reliable indicator. It just couldn’t have been. Why? Jay Powell, of course. Not just the Fed Chairman but also every mainstream Economist and highlighted Bond King, all of whom were insistent that the economy was accelerating which would lead first to inflationary pressures and then the BOND ROUT!!!

Interest rates had nowhere to go but up, thanks to years of courageously successful QE, but they weren’t going up.

Therefore, we weren’t supposed to pay any attention to the yield curve because it must have been broken. Or something:

A bond market recession indicator considered to be reliable is sending more and more negative signals about the economy, but some analysts say there’s no reason for fear.

As one mainstream bond “analyst” put it, “I think it’s still a valid barometer but you need to adjust for its weaker signal about the future.” Why are all the bond analysts and their Kings actually Economists?

It wasn’t just the UST curve, though. The eurodollar futures curve by this time in July 2018 had already been puckered with inversion for nearly a month. Like the flattening Treasury curve together these were actually powerful warnings that things were not going as predicted.

Quite the contrary, the global economy was being pushed more and more by a hidden liquidity/dollar shortage that no one wanted to admit (even the rising dollar).

What that had meant was the incessant and incessantly uniform conviction in these inflation forecasts had been born from hysteria and faith in QE, not honest and rational analysis. The mainstream convention began first with that faith, thus inflation, and then worked backward to bond yields (and eurodollar futures) which didn’t agree.

Therefore, in the conventional view, yields (and eurodollar futures) must’ve been wrong – at best, a “weaker signal about the future.”

As history showed, beginning less than three months later, the signals had not been weaker at all. Rather, if anything, they proved to be as strong as ever. By October 2018, the landmine, these would get amplified and then right on cue mainstream convention was turned upside down when the inflation story quietly disappeared from the media only to be replaced with anxious bewilderment over how Jay Powell was suddenly cutting rates (if for no other reason than to catch up to the bond market).

And here we go again. Lots more QE (and other “money printing”) in 2020, therefore the foregone mainstream conclusion that inflation is right here in front of us. It has to be, right? No fighting the flood myth.

Well, once again, the bond market says, no, it’s not happening. Nothing. Zip. So, obviously, the bond market must be wrong. Again. That’s what was reported in yesterday’s Wall Street Journal (thanks M. Simmons).

For years, the 10-year U.S. Treasury note has been every investor’s touchstone. Now some people are saying they can’t trust its signals the way they once did.

The yield on the benchmark U.S. government security, long a key economic barometer for financial markets around the world, barely budged in response to Friday’s better-than-expected jobs report.

The stock market, by contrast, is closing in on record highs (the NASDAQ already well past its prior records). Always a place to take Federal Reserve officials at their word, the Journal, and to pump up the signal from the pumped stock market: bonds wrong, stocks so right.

That’s the idea but under closer examination stocks and bonds don’t actually disagree all that much; at least not nearly to the same degree as it’s often made to seem.

Let’s start with 2018. I mean, it’s obvious on any stock index chart that “something” changed in the very beginning of that particularly interesting year. Powell and his Bond Kings had said inflation right from the get-go, the fruits of globally synchronized growth ready to harvest in liftoff and economic acceleration.

Yet, even stocks hit a snag right in January 2018; very much like the German bellwether had suggested about the wider global economy. Euro$ #4 shows up at the exact same time for stock indices that it also registers all across GDP or industrial reports and statistics. 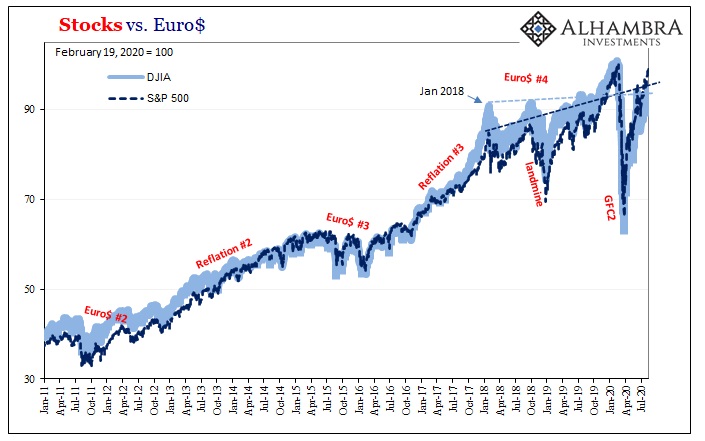 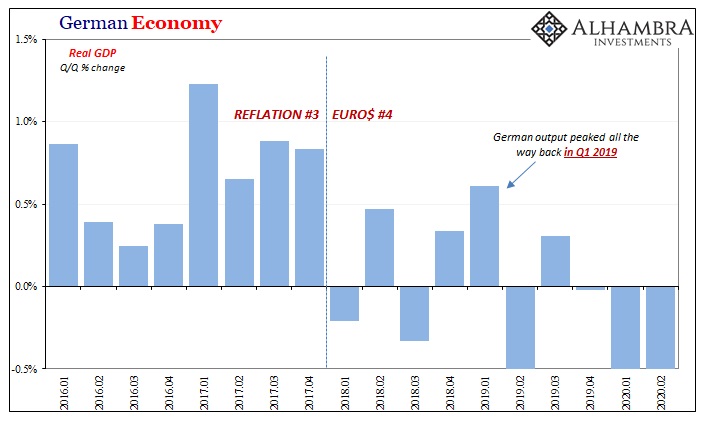 The numbers bear out this inflection: the S&P 500 has fared better, up 16% total from its high in January 2018 to today’s close; the DJIA up just 4% despite more than two and a half years. But compared to the prior period dating back to the Reflation peak in 2015, it’s a clear change in behavior/pattern: the Dow had surged 45% in about the same amount of time compared to the 500’s 35%.

In other words, while Euro$ #4 (the nastier one) absolutely halted the global economy’s advance and “unexpectedly” converted it to a globally synchronized downturn (as the bond market was pricing at the time) while it might not have stopped the whole stock market advance, the rising prospects for systemically weaker growth (and the higher probabilities for liquidation events) did put a serious dent in that trend. 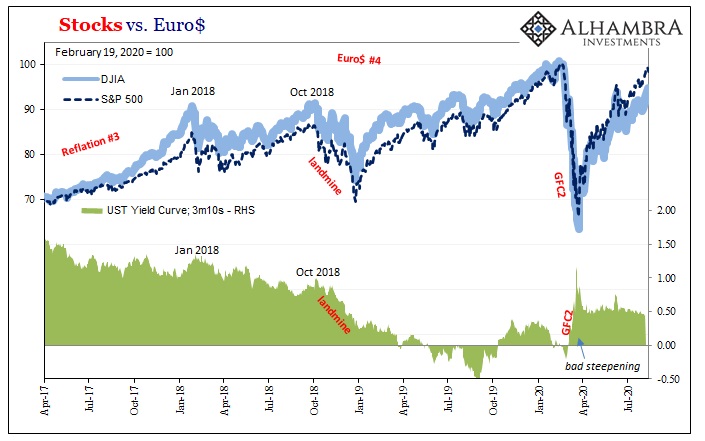 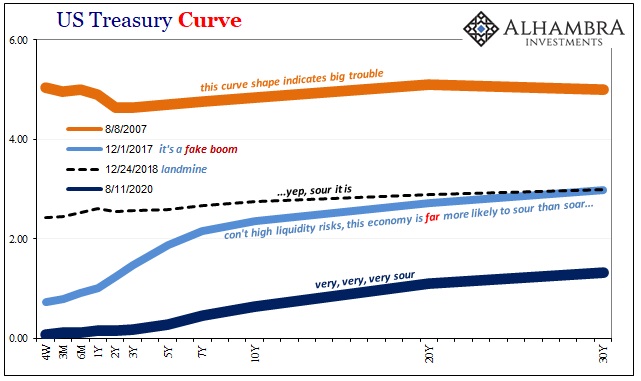 Not only that, the broader trading captured in stock charts matches up relatively well to corresponding bond market warnings along the way over these last two and a half “weaker signal” years.

I’m certainly not saying that stocks and bonds are and have been in lockstep; they evidently haven’t. What is clear in the data, however, is a relatively higher level of corroboration, much higher than the inflation-first mainstream would have you believe.

The economy was completely tripped up and thrown into reverse; the stock market only partially. And both by the same thing, liquidity problems (including these periodic, and strengthening, waves of liquidations), as indicated by yields and curves. Going back to 2017, more likely to sour than soar.

Bonds aren’t dead, they’re just on the highly uncomfortable and confusing part of the same spectrum as stocks (as well as the real economy). The eurodollar spectrum, the missing factor for Bond Kings as well as central bankers who time and again prove the signals they rely on aren’t even weak; like bank reserves themselves, they’re practically useless.

Inflation Hysteria 2: one of these days, one of these days, the yield curve could potentially, maybe be wrong because…reasons. It couldn’t be that the monetary toolkit, the one supposedly responsible for inflation, is largely populated by nothing more than stories about inflation, and BOND ROUTs!!!!, in the financial media.

Eurodollar University’s Making Sense; Episode 21, Part 1: Actually Looking in the $$ Toolkit Because It’s Too Calm Over At China’s Central Bank