It took some doing, and some time, but Mexico has managed to bring its car production back up to more normal levels. For two months, there had been practically zero automaking in one of the biggest auto-producing nations. Getting back near where things left off, however, isn’t exactly a “V” shaped recovery; it’s only halfway.

Two months of zero production are two months of zero sales for the OEM’s producing down there. The latest data is for the month of July meaning that for all the reported robustness of the reopening world there is again another sign of contradictory gentleness and deliberate precaution belying the notion.

I mean, that’s ~600k light vehicles which should have been manufactured and would have been yet they weren’t. In how many places can the biggest economic contributors just skip one-sixth of their annual revenue? The answer is none.

More to the point, why aren’t they going absolutely nuts trying to make it all back as quickly as they can? 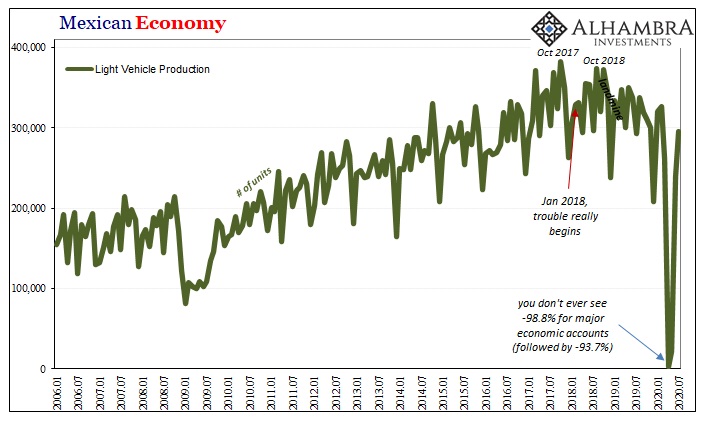 Central banks and their financial media want you, need you, to believe that everything is coming along just nicely. In some places where the words “record” and “stock prices” are associated, not just nicely but, on the surface, anyway, downright perfect.

Underneath all that, there’s two and a half years of contradictory history that in the real world can’t just be set aside so easily. In terms of manufacturing in Mexico, carmakers had been hit with trouble all the way back in January 2018. Despite constant promises and sunny forecasts, it only got worse; for the sector, for Mexican industry, as well as their economy as a whole.

Once the Euro$ landmine detonated around October 2018, that was it. It’s been recession ever since – the recession “scare” increasingly priced by global bond markets throughout last year was no scare in Mexico. It was the real thing – long, long before COVID. Time is any economy’s biggest enemy. 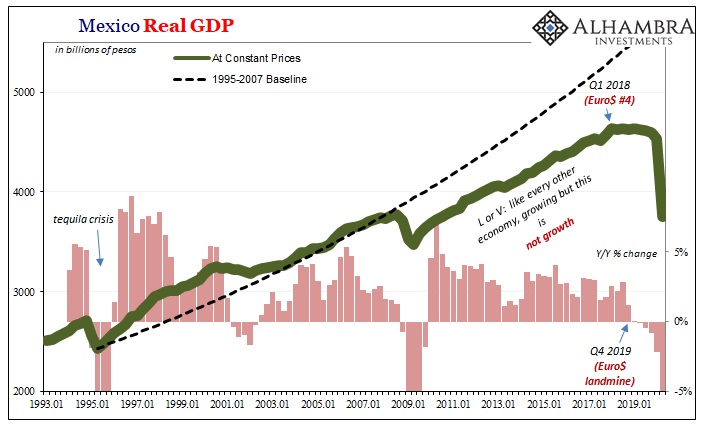 Why do we care? Two reasons.

First, think back to what early 2018 was like. It was a time of true inflation hysteria, among other fantasies. Central bankers were uniform in forecasting their own successes, how they’d finally hit upon the right combination of supersecret policy ingredients to send the economy off flying into the Hollywood sunset after nearly a decade of suffering.

Globally synchronized growth was going to be so good, so purely awesome, that in early 2018 much of mainstream attention was diverted and then devoted to figuring how just how good it would end up being. That was the hysteria of the inflation fortune-telling; including the BOND ROUT!!!!

Despite warning signs all over the place, these views pressed ahead supported only by the ability to craft rationalizations and the gross monetary (as well as economic) ignorance that requires them – the very attributes central bankers actually do possess. While officials globally saluted their own work, in places like Germany or Mexico we could already see how, once again, they’d gotten it totally wrong.

That’s the second reason why we pay attention to these things in these places; Mexico’s industrial sector is a pretty good bellwether not just for the global economy as a whole more so as it is influenced by what’s really going on in the US behind all the rosy yarn spinning. 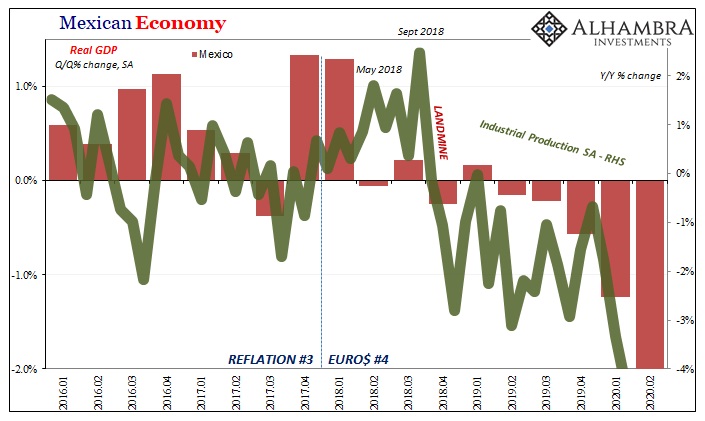 According to the latest Mexican estimates, GDP during Q2 2020 crashed by 17.3% from Q1 – and that was at a quarterly rate (annual rate of -53%). More importantly, though, what comes next?

While vehicle manufacturing is at least getting back into the same range as it had been before March, Mexico’s industrial sector overall remains nowhere near it; the same curious sort of lackluster rebound we’ve uncovered in industrial sectors all over the world. For the month of June, Mexican IP was still 17% below February and just about 20% less than it had been all the way back in May 2018 more than two years prior.

If we’re being honest about these last two and a half years, shaking our heads at just how wrong central bankers, Economists, the media, Bond Kings, etc., had been, in the real world of industry being left to fend off the real world consequences of those major mistakes perhaps might make industrialists (as a start) a bit skeptical about the current narrative which sounds, to them, disturbingly familiar.

In the media, it was as if inflation hysteria never happened; reporters didn’t report its falsification, they just moved on like it was all some dream. They can do that. Central bankers sure can do it, too. Real economy participants, however, can’t.

Inflation. Acceleration. Recovery. Weak dollar for all those. Ample liquidity, even a flood of it.

Throw all that grounded skepticism in on top of the prolonged agony and weakness of 2018’s globally synchronized downturn, the one which only got worst in 2019, and it’s quite enough to understand why the current thing once again looks more “L”-like at this stage than it does resemble the beginning and middle upstroke of this “V.”

Down there in Mexico, there’s no rush to get everything back up and running again – even in the car sector. You have to wonder why, and also why after the actual experience of early 2018 (and what came after) “they” are all back to doing it again; making the same promises and forecasts. 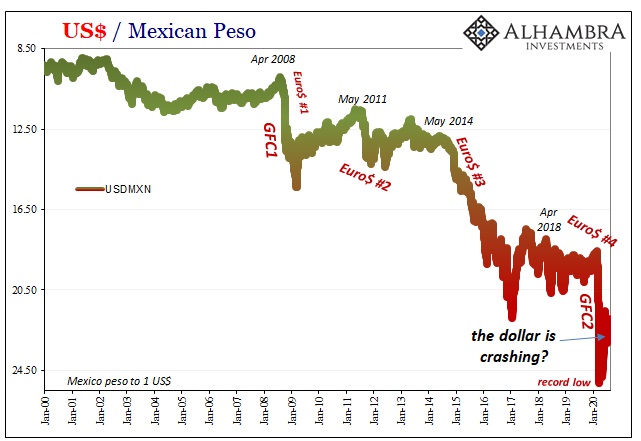 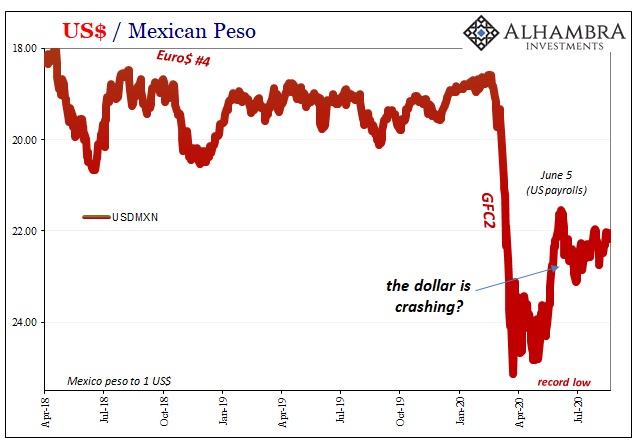 Even more hysteria over inflation, with none priced anywhere. BOND ROUT!!!! this time needing aggressive yield caps (though that one was quickly retired). A DOLLAR CRASH!!!! that no one outside of Europe can find. There certainly isn’t one for Mexico.

Any central bank, like the Federal Reserve, can tell you its toolkit isn’t anywhere near empty. There’s always the next QE which authorities can use to buy up some other asset class, one that hasn’t yet been spoiled by the “money printing.” That’s not a deep toolkit; on the contrary, it ably demonstrates the utter barrenness within it.