12 States That Keep Retirement Dollars in Your Pocket

12 States That Keep Retirement Dollars in Your Pocket

“Will I outlive my money?” That’s one of the biggest concerns for most retirees. There’s the high cost of medical care, which gets more expensive all the time. There’s inflation, which raises the cost of goods and services, eating into your retirement budget. And then, there’s taxes, which are as certain as death, and the politicians who want to raise them.

So, if taxes are an issue where you live, and you’re thinking about moving to a place that’s more economically friendly to your retirement savings—where do you go?

There are nine states that have no state income taxes:  Alaska, Florida, Nevada, New Hampshire, South Dakota, Tennessee, Texas, Washington, and Wyoming. With no state income tax, you don’t have to worry about paying taxes on distributions from 401(k) plans, IRAs, or pensions.

Illinois, Mississippi, and Pennsylvania have state income taxes, but they do not tax distributions from 401(k) plans, IRAs, or pensions.

Alabama and Hawaii don’t tax pensions, but they do tax 401(k) and IRA distributions. 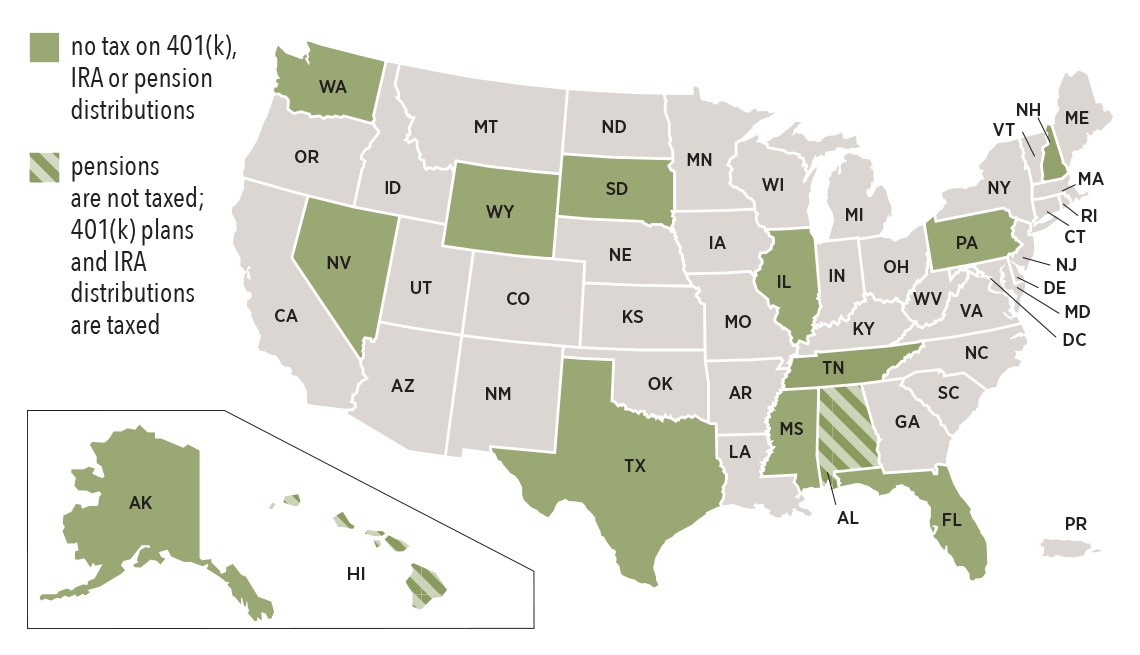 Virginia taxes all military retirement income except that of Congressional Medal of Honor recipients.

Colorado allows taxpayers 65 and older to subtract $24,000 from their federal adjusted gross income (AGI), which is the number used to calculate state tax.

Connecticut teachers get to subtract 25 percent of their retirement income from federal adjusted gross income.

Keep in mind, states will get their money somewhere. States with low or no income taxes may have higher property or sales taxes. Case in point—Illinois doesn’t tax retirement income, but it has one of the highest sales and property taxes in the country. Tennessee has no state income tax, but has a sales tax of 9.75%

Taxes are certainly a consideration when you’re deciding where to live in retirement, but not the only one. Find out what other tax breaks are available to you; what services are available to retirees; climate; overall cost of living; quality of life; safety; convenience; political administration; distance from family and friends. Only then can you decide if the moving van will back up to your front door.

About the Author: Bob Williams

Give us a call today at 1-888-777-0970 or via email at info@alhambrapartners.com and we’d be happy to arrange for one of our investment professionals to discuss your situation with you – completely complimentary. Let’s start the conversation today. Bob is the Director of Media at Alhambra Investments, an SEC-registered Investment Advisory firm doing business since 2006. Alhambra Investments specializes in all-weather, highly diversified, multiple asset class portfolios.