Why are there still outstanding dollar swap balances? It is the middle of September, for cryin’ out loud, and the Federal Reserve reports $52.3 billion remains on its books as of yesterday. Six months after Jay Powell conducted what he called a “flood”, with every financial media outlet reporting as fact this stream of digital dollars into every corner of the world, how can there be anything greater than zero in overseas liquidity swaps?

Six months is an eternity.

While you think about that, let me ask another question. Would it surprise you to find out that the primary central bank counterparty on the receiving end of these instruments just so happens to be the Bank of Japan?

If you’ve been following JPY, no, this doesn’t surprise you one bit. There’s been something big “off” with Japan ever since March. 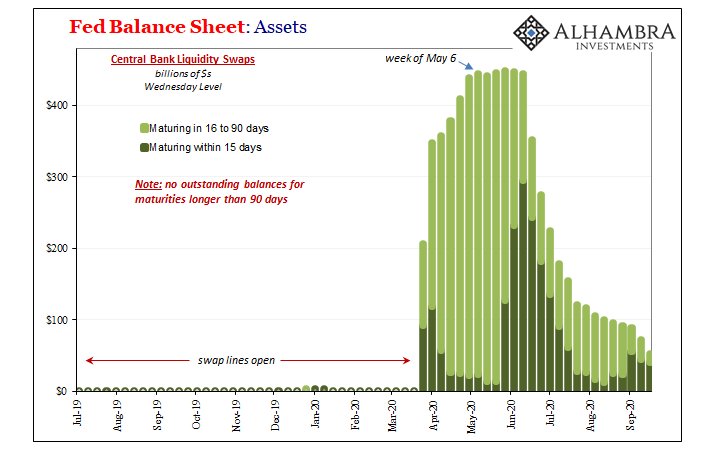 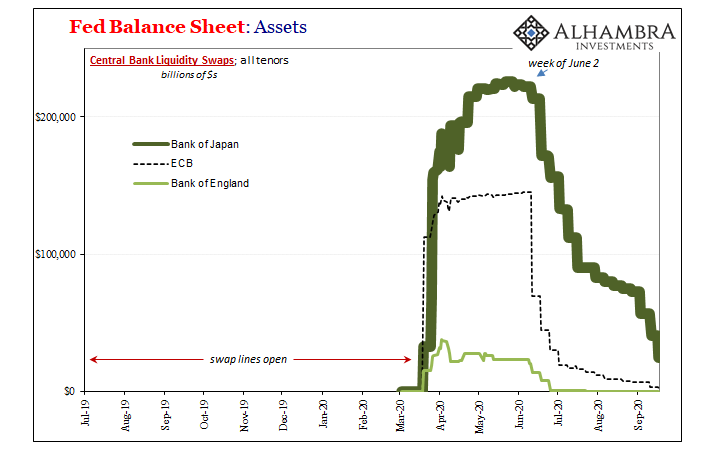 The wider, more relevant question is why are American banks (an official category which includes US-based subsidiaries of foreign bank parents) still borrowing “dollars” from the Bank of Japan specifically?

As we know, thank you TIC, these “overseas” swaps aren’t really overseas much at all. While they originate here with the Fed and then get transferred electronically across the Pacific to the Bank of Japan (or south of the border to Banxico, the other one with a significant outstanding balance), we’ve seen them turn right around and flow back inside the US border to the waiting computers of “American” banks.

Japan, of course, is a key indicator of everything else in the region outside of its home islands. The banking system there is and has been the crucial eurodollar redistribution hub for much if not all of Asia’s dollar needs. There are other avenues for banks and financial firms across the continent to take, including those in China, as we’ve speculated about recently, but Japan and therefore JPY tells us something important about how the system is faring in the Asian “dollar” segment of the system.

Given this swap data, how Asian can it be? Circuitous and convoluted, but we have to wonder why it seems US-domiciled banks (including, again, domestic subs of foreign parents, perhaps a few parent holding companies located in Tokyo) are so interested in the Bank of Japan as opposed to the ECB or Bank of England.

One reason would be familiarity – if the receiving firm, the one bidding at BoJ, is, obviously, Japanese. Therefore, you can bet that while the ultimate bank receiver resides in the US it surely has a Japanese name. 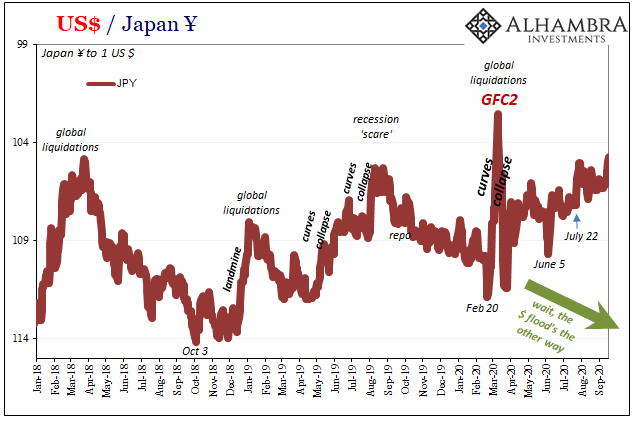 So, if Japan is a key redistribution point and the Bank of Japan has been slowest at winding down the convoluted swap program, whether it runs inside the US or not, what must this say about the Asian “dollar” part of the whole? Perceptions.

Taken altogether, it sure seems to indicate continued tightness (along with practically every relevant curve) where the eurodollar system had last been most constructive. In terms of exchange values, this would explain why the dollar isn’t actually crashing as has been advertised. On the contrary, it’s amazing the dollar’s value has held up as much as it has.

That’s not to say it isn’t falling; though falling is the wrong word to describe it. Drifting downward at a meandering, unusually slow pace. That pace at the front has been set elsewhere more famously by the euro (and pound), thus DXY and the (irrelevant) basis for the screaming headlines about the dollar’s crash. 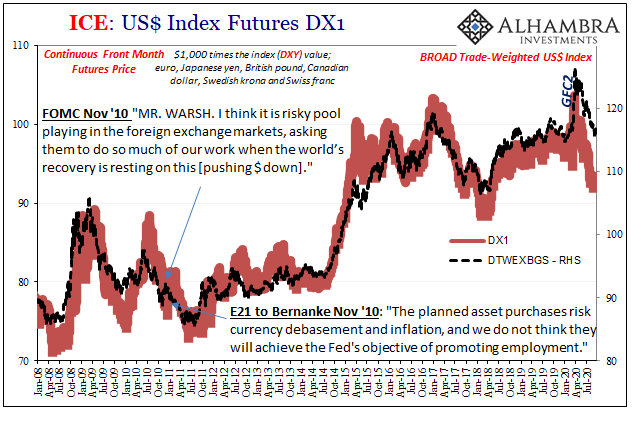 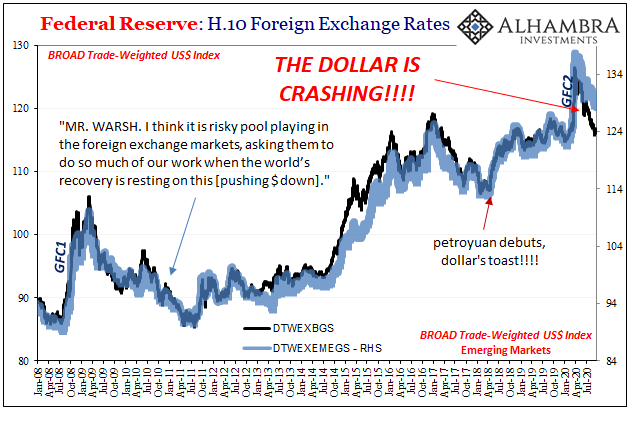 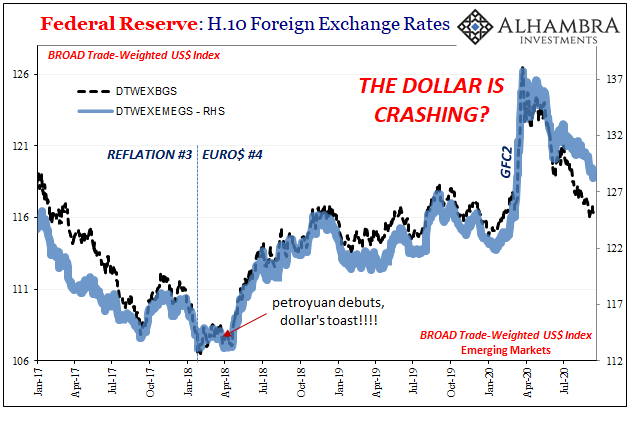 More quietly, more importantly, against EM currencies alone, a lot of them Asian, the US exchange value is doing, and indicating, something else entirely. Still. Six months later, in the middle of September 2020.

And that’s with JPY going up, as has CNY! What must the rest of the EM index look like after accounting for all these Chinese and Japanese shenanigans? Maybe there’s something to them otherwise indicating an opposite condition given how everything is supposed to be back to normal.

There’s a whole lot of monkey business for a system that’s been fixed for half a year.

If there has to be so much central bank “meddling” around the “Asian dollar”, which has to include Mexico, something’s just off. Not a small something, either. Both the trade weighted and EM trade weighted dollar indices, though they’re lower and still moving lower compared to the GFC2 peak in March, how in the world are they still substantially higher than they were in February before the crisis began (the last time we had to hear about the last dollar crash which like all the rest never happened)? 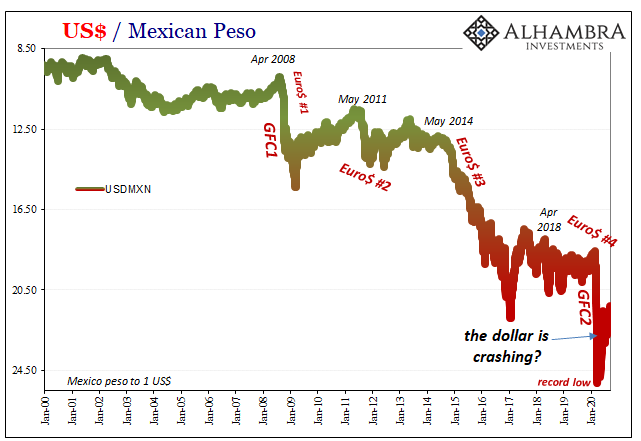 Japan, Bank of Japan, JPY, and those other currencies most susceptible to systemic monetary tightness globally – regardless of the level of bank reserves, even those created as the first leg in the Fed’s overseas dollar swaps. These are indications of a post-GFC2 world still very much on edge. Not getting worse right now, obviously, but meandering lower as the dollar has since June isn’t the same thing as getting better.

Quite the contrary. That’s just reopening inertia perhaps combined with a small tinge of survivor’s euphoria. As we’ve asked of late with regard to economic data worldwide, once the momentum from reopening is exhausted, then what?

Dollar crash, though. It’s all over the financial news – just like Jay Powell and his inflation fairy tale requires.