It’s always something. There’s forever some mystery factor standing in the way. On the topic of inflation, for years it was one “transitory” issue after another. The media, on behalf of the central bankers it holds up as a technocratic ideal, would report these at face value. The more obvious explanation, the argument with all the evidence, just couldn’t be true otherwise it’d collapse the technocracy right down to the ground.

And so it was also in the bond market. Inflation and their yields very much related, the lack of the former wasn’t ever used to explain the curious absence of the BOND ROUT!!! No, the US Treasury market has been beset by its own set of “transitory” factors, too.

As ridiculous as some of the inflation excuses had been, Verizon’s unlimited wireless data plans the worst of this lot, those that have been offered for why interest rates clearly did have somewhere to go that wasn’t up have been even more absurd; even more divorced from substance.

In the summer of 2018, for example, yields were slightly inclined but in no way consistent with the inflation being talked about. Instead, curves were being distorted (eurodollar futures already inverted) as if some mysterious force was forcing the market to bid heavily on instruments the mainstream had been constantly warning to stay away from.

The Fed warning loudest of all; don’t ever fight the Fed!

Yet, someone at that time really was. A lot of someone’s. Thus, there had to be some arcane technical reason to explain this, otherwise it would indicate very strongly that the Fed…perish the thought.

So, somebody looked at December 2017’s tax reform bill and said, a ha!, I see it now! A tax break had given institutions an artificial window which, blah, blah, blah, you can read the details here. Suffice to claim, the bond game was up, this was the time when everything would turn itself right back up again, the very moment the “transitory” lid would be pulled off the bond market.

“One of the most powerful forces in the market place is this pension buying that is taking place,” said Tom di Galoma, a managing director at Seaport Global Securities…

“Every day for months now there has been steady buying of 30-year Treasuries,” said a trader at one large bank. “That goes away after September [2018].”

Obviously, it sure didn’t happen that way; completely the opposite, actually. Instead, the landmine showed up not unexpectedly (curves) right when this other thing was scheduled to go away. Interest rates which were supposed to have begun skyrocketing without this tax incentive instead rolled toward a plummet. One of the greatest Treasury rallies in history from that point onward to wreck Jay Powell. 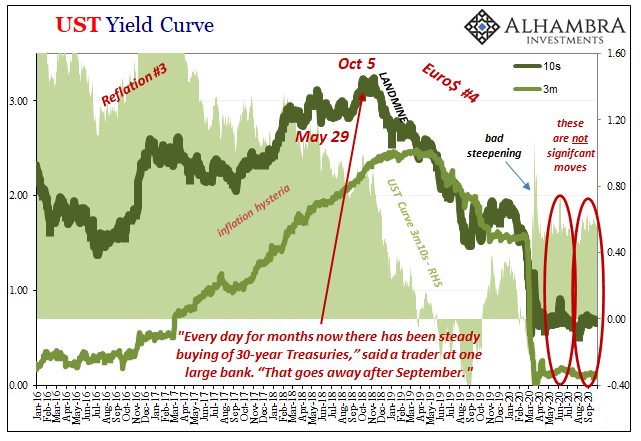 Not transitory, as it has turned out (again).

The mainstream view is nothing if not stubborn, betraying religious-like devotion because, let’s face it, this sort of technocratic ideal is little different than a cult.

As a cult, faced with a mountain of contrary evidence and a tortuous ride through recent history this merely forces its members to dig in further; to reach deeper into the absurd. Its high priests have already done so, admitting first that “transitory” was a stupid idea; they now say whatever factors holding back inflation (and the BOND ROUT!!!) may not have been transitory like they said, but who cares because these factors just don’t matter. Duh.

Because the central bank will now “let” inflation go above its target and remain there, even though it is at the same time confessing it had (and has) no idea why it hadn’t gone near the target for so long before now. If you aren’t a full-blown cultist, you easily realize what Powell’s saying is that after failing to hit the inflation target for over a decade he’s now going to let inflation run over the target none of them could hit because for more than a decade no one could hit their own target.

But, once again, bond yields. The Fed cannot!!! possibly fail again, so why aren’t rates rising? Even though transitory is no longer a word used at the central bank, transitory factors are back in high mainstream demand this year to attempt some explanation for the lack of movement on rates despite Jay Powell’s massive, biblical flood of liquidity (he couldn’t possibly have flat out lied, could he?)

For a little while earlier, a few months ago, it was widely claimed how it had been because the market was respecting the mere threat of yield caps – because if there’s one thing the bond market has demonstrated it is respect for the Fed’s abilities?

That didn’t fly, so now a new “transitory” factor has emerged the closer we get to November: the US Presidential election. I mean, what else could the bond market (and dollar) be so worried about? What other widespread concern could be keeping a lid on rates when inflation and recovery has been 100% guaranteed by the technocrats?

As I wrote yesterday:

Therefore, to the cult, it has to be Trump vs. Biden and the (very real) potential for serious, unsettling shock. If it wasn’t for the election, the bond market would be stock-like overjoyed about the world, that euphoria pushing interest rates (and the dollar, too) toward Jay Powell’s side (instead of nowhere near it).

Seriously. Here’s Bloomberg just yesterday telling us that there’s huge upside in yields if the election goes smoothly, allaying those fears which are and must have been, in this view, responsible for the latest ceiling over rates.

And yet, (thanks M. Simmons), buried within the same article is pretty straightforward recognition of the very same kind of money/eurodollar/liquidity factors that have actually been governing interest rate mechanics and setting the global economic agenda all the while thwarting one Fed Chairman after another:

The risk that yields pop higher is deemed so unlikely that traders of eurodollar options are more focused on a possible year-end funding squeeze than the U.S. election.

Get that? Some people say fears over this highly contentious election must be to be to blame for the bond market’s post-March defiance of inflation and Powell; dollar, too. The “experts” have all phoned in their updated lines.

The market itself is instead very clearly focused entirely elsewhere, the same elsewhere the cult never looks.

What election? What special tax incentive? What latest transitory nonsense?

As if to prove the point even further, the ECB has the absolute nerve today in the wake of more deflation to float a trial balloon which promises to move its monetary policy closer to the Fed’s – oh yeah, average inflation targeting is going global because inflation is behaving as predicted? Of course not.

In a serious world, this would all be recognized for what it truly is:

Cowards, every single one. Destructive malfeasance. I truly wish this had been a joke.

[T]hese are not serious people and that is why I keep calling for them to be replaced. The zero lower bound was never a trap for the economy, it was always one for central bankers alone – because they have no idea what they are doing, and now, with symmetry being rerun from 2018 and one-sided deviations put into the strategy language, it’s obvious they don’t even have any ideas.

Gee, why aren’t interest rates flying upward? It’s (still) a huge mystery when you don’t consider the one thing that’s responsible for everything (no, not central banks; what central banks won’t ever talk about). 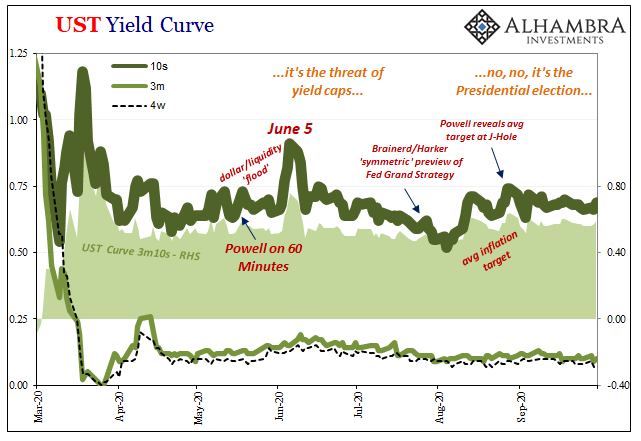 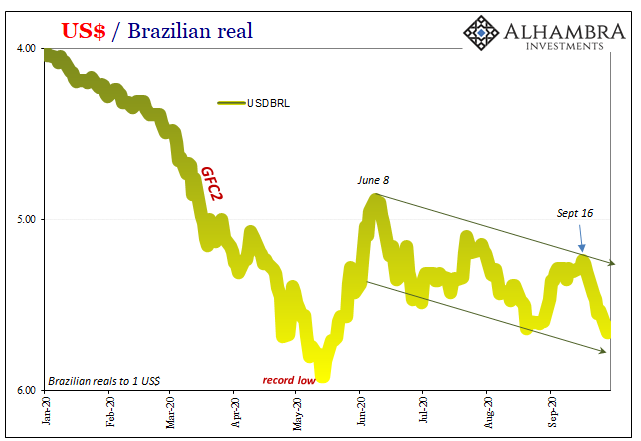 It’s one (good) reason why I like the Brazilian real to start with to go along with UST yields. You can look at the latter and think 2020 Presidential election, sure, but BRL’s got nothing to do with any of that. As Sherlock Holmes said, all the facts.

And all the facts for all these years continue to demonstrate that this is the eurodollar’s world, it has been for decades, not Jay’s nor Christine’s. It was never Alan’s. You have to hand it to the “maestro”, though, he sure made a whole lot of people believe otherwise. 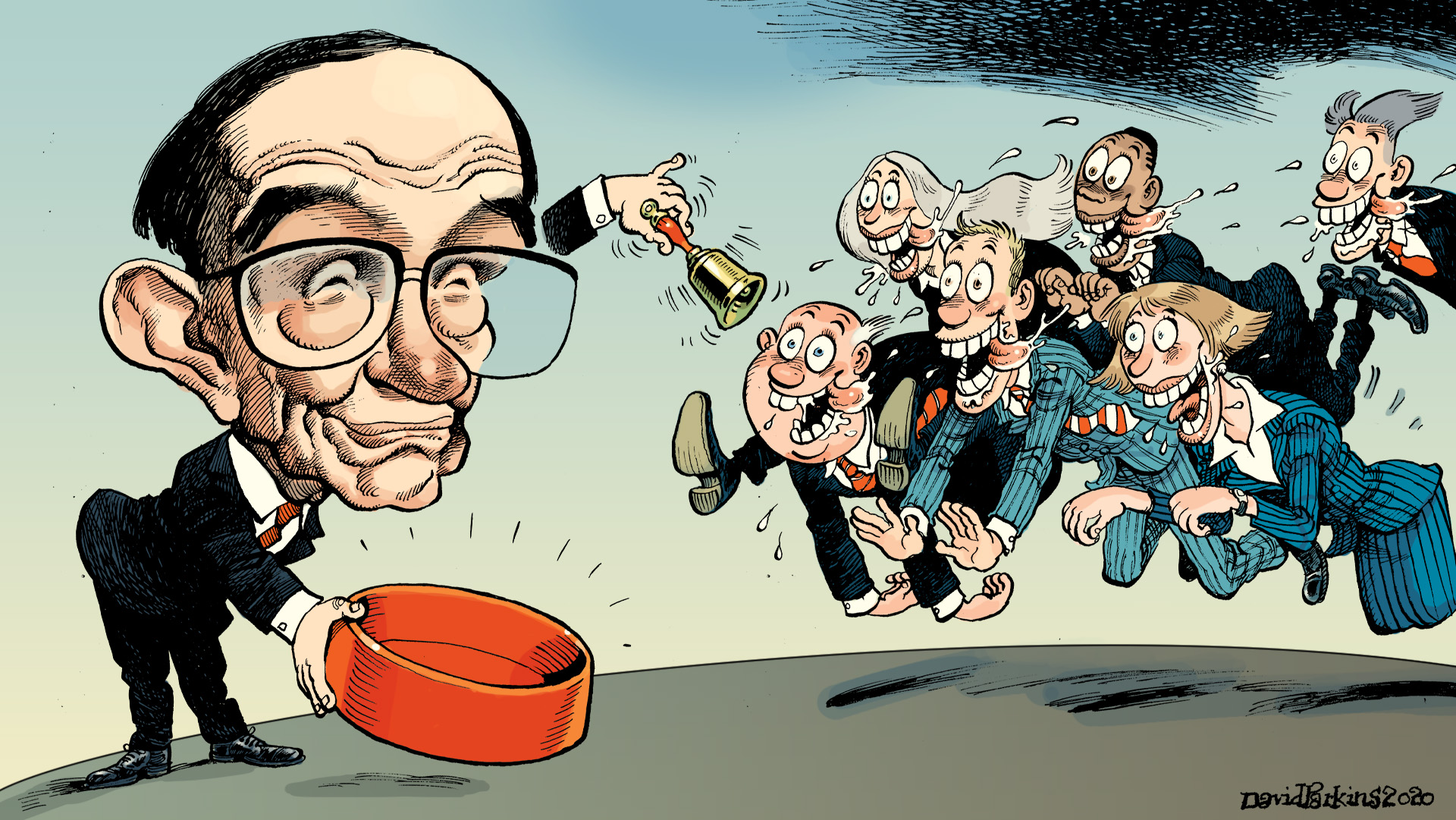