Crude oil futures continue to be more than a buck in contango in the most liquid part of the WTI curve out to three months. One of the more important anti-reflation indications, especially given the situation on energy’s supply side, hardly anyone cares about this glaring contradiction given this latest very minor sell-off in the bond market’s long end.

For the third time since March, the BOND ROUT!!!! is back! The 30-year long bond yield nearly closed at 1.60% in today’s trading, which represents the highest dating back to June’s Jay “flood” myth. Yes, we’ve been here before, as I wrote in early June:

Over the last several days, Bloomberg (obviously) has been unusually and sharply focused on the 30-year long bond. The publisher like everyone else mainstream absolutely hated the damn thing for years when it was inconveniently signaling (correctly) that globally synchronized growth was a bumper sticker slogan and never anything more than that.

Within a few days, the 30-year turned around moving downward, flattening the curve while it did in Jay Powell’s flooded face. All of a sudden, the only actual flood, media stories about it, curiously dried up.

Why make so much about what are, in the grand scheme of things, the very smallest of moves? The question answers itself given the background; the Fed’s inflation story has nothing else behind it. In order to manufacture some “evidence”, the smallest little molehill in yields is turned into the massive mountain the Federal Reserve had warned you about.

Not just this year but each year going back to 2017. Interest rates have nowhere to go but up yet somehow all they do is go down. Someday maybe someone should answer for this. A Bond King or mainstream media outlet with enough nerve and critical thinking to ask an FOMC member, perhaps. Every time they scream inflation and BOND ROUT!!!!, bond yields are actually lower (like the dollar is higher) than the last time they did.

But if Jay’s got supporters this time, we should be able to find them supporting his forecast. You’ll be absolutely shocked to learn that, no, there’s really nothing in the market which is consistent with the prerequisite reflation let alone looming rapid-fire inflation.

If anything, searching for clues among traders in the UST futures pits, there’s a ton more weighted in the opposite direction. 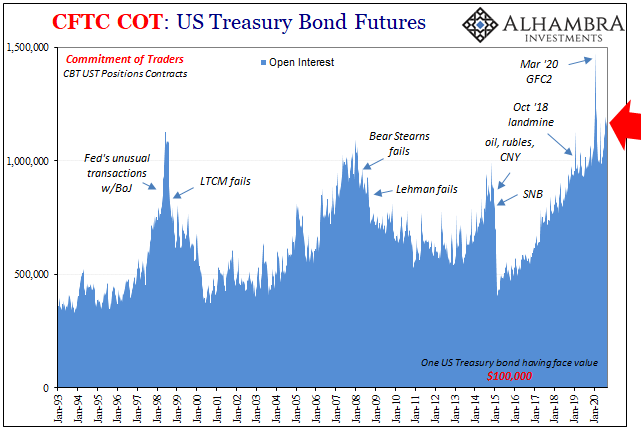 Let’s start with what I always start with, and that’s open interest for long bond futures. Above a certain level, say 800,000 contracts, it has pretty consistently indicated serious (and, as it has turned out consistently, well-founded) widespread concerns. Financial agents seem to load up on long bond futures as hedges against big problems they’re seeing building up in their near future.

Not just generalized uncertainty, mind you, liquidity fears of the kind we keep finding which drives demand for the safest, most liquid instruments pushing the rates on them lower overall. Maybe not in a straight line, but eventually that’s where they go. 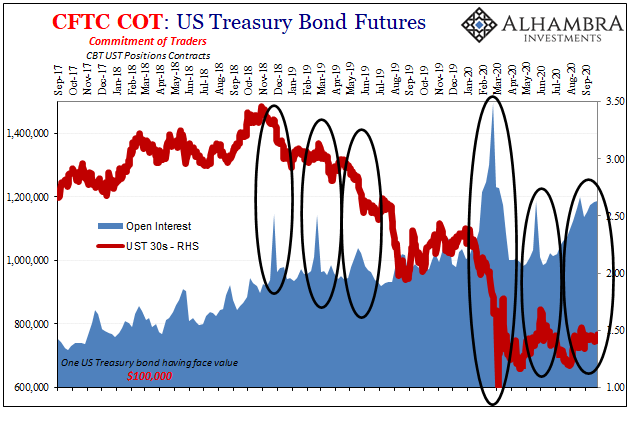 More recently, open interest in long bond futures jumped up to more than 1.1 million during the final week in August, that same week when Jay Powell was a floating head at Jackson Hole’s virtual conference trying to convince everyone that average inflation targeting was somehow different than a symmetrical inflation target which he said wasn’t actually the same thing as forward guidance.

Before late August, OI had previously surged during that week in early June back the last time the mainstream got so fixated in long bond and late-curve mechanics – and then yields promptly sank leaving them, for the mainstream, no longer noteworthy.

What’s unusual about September 2020 is the commitment of leveraged money to short these instruments; though now an even bigger record, it’s been moving this way for a long time before last month. The plaything of Bond Kings, it’s very clear that this particular segment of the futures market is playing around with Jay Powell’s word by taking it very seriously.

They’ve never been more short long bonds, and it isn’t even close. 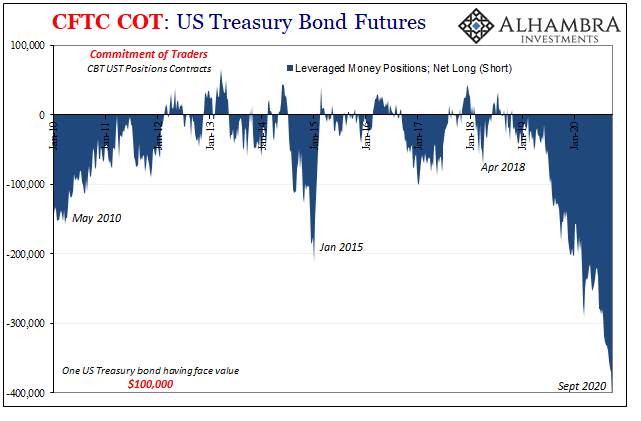 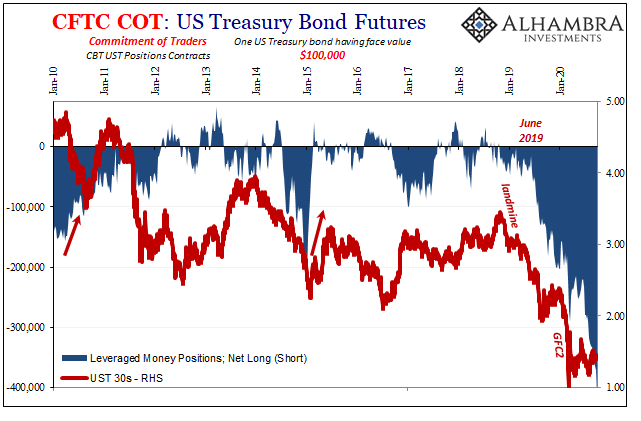 But you’ll notice, however, the last couple of times there was this much shorting out of this particular group of futures investors it ended up with some minor backup in yields which didn’t last very long – the Treasury bond rally returned and marched rates lower in 2011-02 and again in 2015-16.

What does twice as short mean for the rest of 2020?

Over the past couple of years, going back to around June 2019, this huge bet has only gotten bigger and bigger – as rates have gone lower and lower. Why June 2019? Most likely the Fed; that’s when rate hikes then the Fed pause became rate cuts which, as we constantly get told, have to be inflationary thus bad for bonds – long bonds most of all.

Then rate cuts became rate cuts plus “repo” ops plus not-QE, therefore even more “inflationary” potential. Followed by even more and bigger Fed stuff done in early 2020 because of deflation (curiously not inflation) which has only driven these to yet more shorts. More recently, yep, now we’ll add average inflation targeting in which Jay Powell claims the central bank after spending a decade unable to reach its inflation target is going to let inflation run above the target it couldn’t reach in order to make up for the decade in which it couldn’t reach its target.

This gigantic short position has the makings of a good story, though not so much Powell-pleasing evidence.

One key reason why is the rest of the market which takes account of leveraged money as well as everyone else. 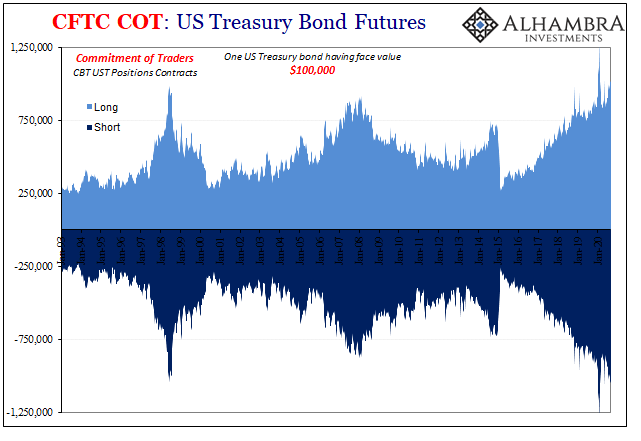 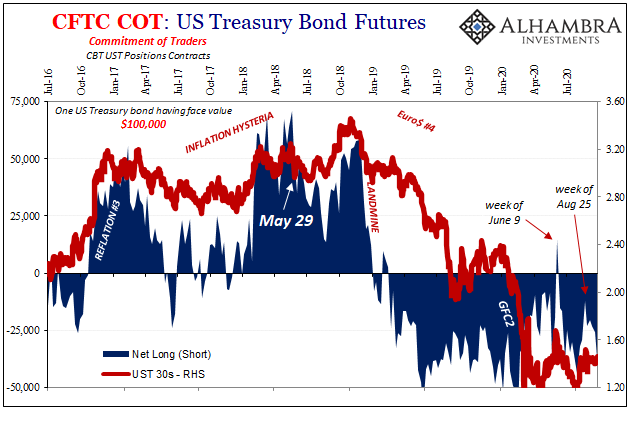 In addition to high levels of long bond future open interest, the overall net position is also in the wrong direction for reflation. The total net jumped positive – during that week of June 9 (the last top in yields). Since August 25, positioning is going the wrong way again, the direction that is consistent with the same sort of anti-reflation lid on yields the market has imposed despite these intermittent screams of BOND ROUT!!!!

Concern and hedging of the kind you wouldn’t expect to find with a small bit of reflation let alone the guaranteed inflation we keep hearing about in the media.

A backup in long end yields isn’t unusual; it’s happened three times since March and those three had followed several late in 2019 that saw yields actually back up more substantially than this. No inflation.

Jay says that word over and over, and even when he doesn’t say it the entire financial media repeats it for him; yet the bond market isn’t even close to buying reflation – outside of one extreme segment which has been at an extreme almost the entire 2018-20 Treasury rally.

On top of all this, we’re supposed to get excited for what’s got the bond bears today so excited: the Presidential election. The risks of it going smoothly are, apparently, going down (which many interpret as a Biden win, therefore more “stimulus”) and since the market has been “so worked up” over the prospects for a hugely contentious election this would, they say, remove the final support for low rates, opening the floodgates for bond market recognition for what Jay Powell has continuously claimed was a massive earlier monetary flood.

It has to be the election, right? What else could it be? The sixth QE couldn’t possibly be a let down (like the other five). By the way, they still haven’t explained June.

This latest narrative isn’t even cherry picking; it’s pure straws. Yields can and maybe even will go higher than where they are now, but that’s just markets; it’s not even reflation. Forget inflation.