We’ve been documenting for weeks now how every chart, therefore every market, shows some kind of inflection around and immediately after August 27. This was Jay Powell’s big Jackson Hole fiasco, questions about the global “V” having already multiplied since June were further compounded by the absolute joke that was average inflation targeting. As noted earlier, even Germany’s bund market had sniffed this out, with longer end German yields noticeably back lower and nearing record lows.

Curiously, though, there’s a glaring omission from the otherwise uniform negativity which spans markets and continents. US Treasury yields! 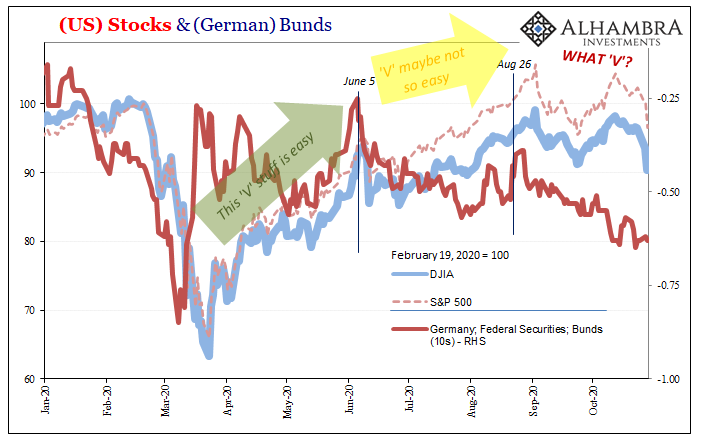 While even stocks (stocks!) have been caught up in this recurrence of market volatility, yields at the long end of the Treasury curve has been moving their own way higher. This has meant a very noticeable split with German bunds which have, for years, otherwise traded in near lockstep fashion.

Even more interesting, this split dates back to…late August. Huh? 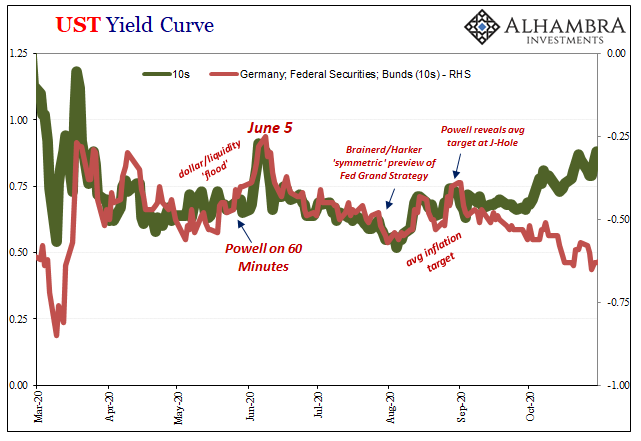 Is this why Christine Lagarde recently has said the ECB is going to undertake the same “exhaustive” examination of monetary policy that led the Federal Reserve to its average inflation targeting epiphany? Did Jay’s central bank figure out how to (finally) unlock the keys to inflation, thus the BOND ROUT!!!! at long last?

He wishes. He does have those who are betting on him; betting a ton on him.

Before getting to the Treasuries futures market, first we’ll note this isn’t the first time bunds and longer-dated UST’s have diverged. The last time it happened was when “unexpected” questions about Germany and Europe were becoming more serious, while at the same time “everyone” was convinced the US would decouple from them and take off into an inflationary sunset regardless. 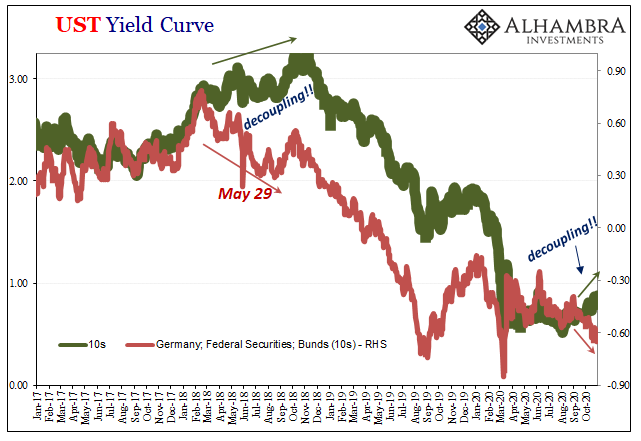 Decoupling lasted just a few months further, only until around October 2018 when it all went back in the wrong way.

But back then the US economy had several things going for it that it doesn’t have now; namely, growth and inflation seemed somewhat plausible in the era of “globally synchronized growth.” Sure, it was the latter’s dying days, but economic growth had actually accelerated (for one quarter, but still) and oil prices were moving upwards of $70 or so.

Recoupling, the eurodollar re-synchronizing everything from October 2018 forward, might’ve simply been inevitable, only “unexpected” to the mainstream media and anyone using the mainstream media to bet on bonds. Why? Because in the middle of 2018 the idea of acceleration, legitimate and sustainable acceleration of the kind which would have been inflationary, was equally a mirage no matter how many times Jay Powell assured the world it wasn’t.

This could end up sounding familiar, too, depending upon how the next few months play out. Which, we better hope, recoupling doesn’t work like it did that last time. 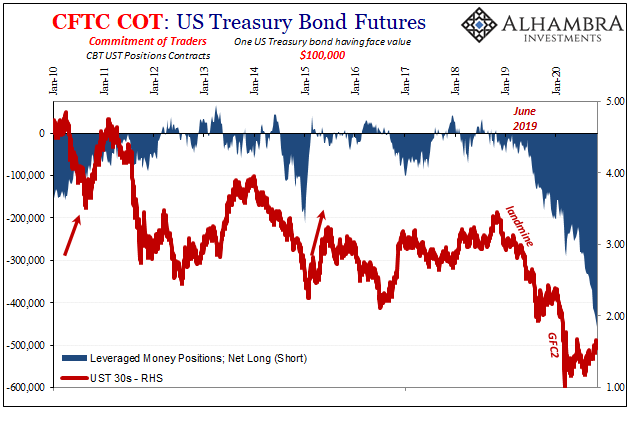 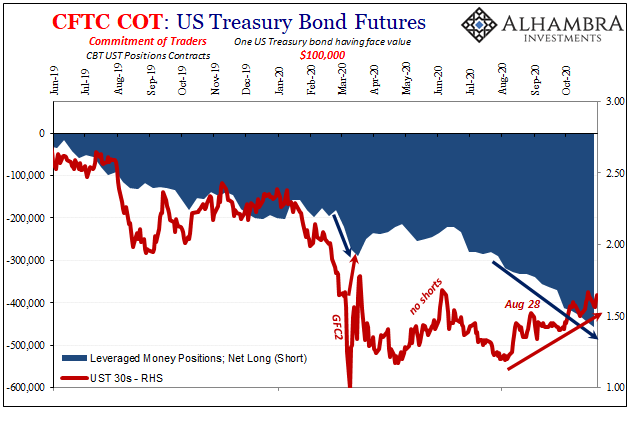 Unlike 2018, however, Jay’s got an historically huge boatload of speculators betting on him; as such, I doubt they’ll be classified as “evil” even though they are shorting the crap out of a major financial instrument which, when it works against the perceived interests of central banks leads to government admonishment.

Going back to around August 28, yep, the shorts have been piling on in anticipation of inflation, growth, and an even broker federal government (though the Treasury just announced a much smaller quarterly funding plan) – this actually goes back to the last low in long yields, earlier in August.

Therefore, when UST’s and bunds parted company they did so with US speculators – and only US long bond speculators – seemingly betting on, yep, decoupling.

The rest of the Treasury market underneath, looking at other long bond futures parameters, isn’t nearly so sanguine. Open interest has jumped up to more than 1.2 million contracts once again (up to the end of October), which isn’t usually followed by the BOND ROUT!!!! of every speculator’s financial dream. 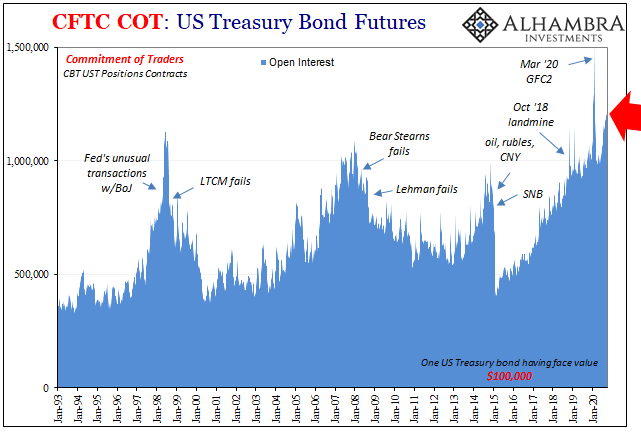 Quite the opposite, actually.

This doesn’t mean, of course, that yields won’t rise more than they have since early August – markets always fluctuate. But what happens if what’s behind the OI numbers is right and “something” happens (again) with all those shorts already historically short and only 160 bps on the 30s (and 90 bps on the 10s) to show for them? The downward gravity of German bunds is already lurking in the background, just as it was in late 2018.

Put another way, Jay’s inflation story, which is the same being pitched by Christine Lagarde, is being refuted over in Germany while speculatively embraced but only nominally in UST’s. Not even inflation expectations (TIPS) nor interest rates swaps are in on this. Those are in the other post-August 27 camp, the bad one (below).

In other words, it really looks like the only difference is the speculative shorts. Everything else, and I mean everything, is pointing the other way. Anything goes in the short run, but then what?  They didn’t when the shorts starting piling up back in the middle of June 2019 (bets on rate cuts and “repo” ops). And while bond yields – over time – sank lower and lower and lower, they kept piling on the shorts anyway.

I hate to use the term, but its intended meaning easily conveys the notion: does the “dumb” money really know something apparently no one else has or does? 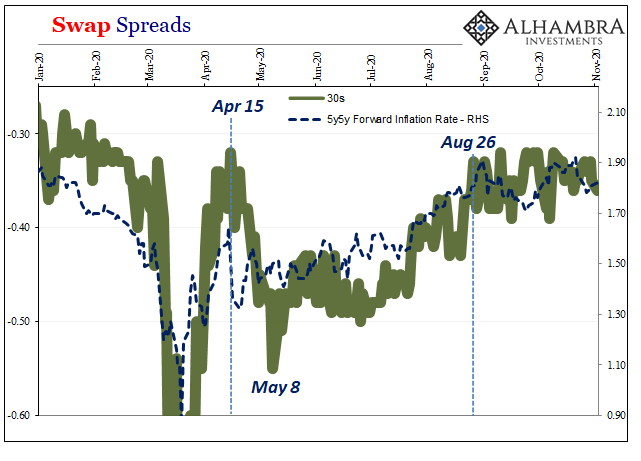