A big splurge in September, and then not much more in October. While it would be consistent for many to focus on the former, instead there is much about the latter which, for once, is feeding growing concerns. Retail sales, American consumer spending on goods, has been the one (outside of economically insignificant housing) bright spot since summer. If it succumbs to the slowdown every other economic account is displaying, that could only mean it really has been artificial all along.

The Census Bureau reports today that unadjusted retail sales had gained (upwardly revised) 7.65% year-over-year in September 2020, the highest rate in a very long time. Last month, October, the rate cooled somewhat to 6.01% – but that included a large contribution from allegedly robust auto sales that aren’t showing up elsewhere (more on that below). Excluding autos, retail sales were but 4.72% higher this October than last, and last October consumer spending verged on the recessionary. 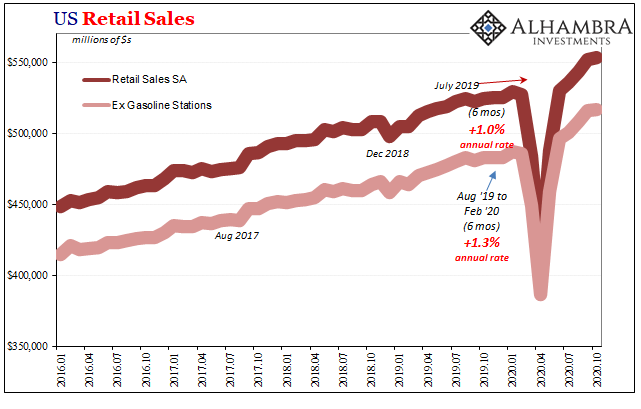 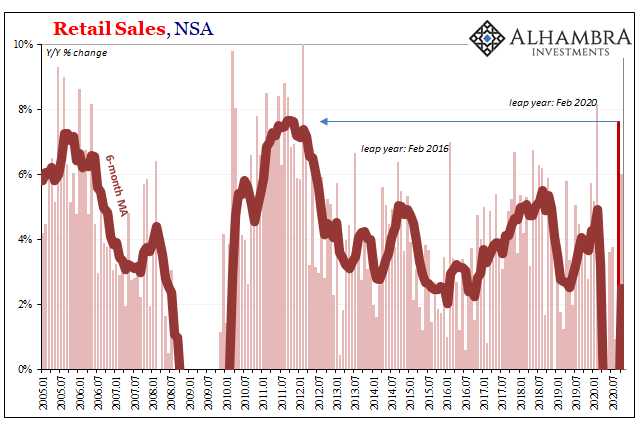 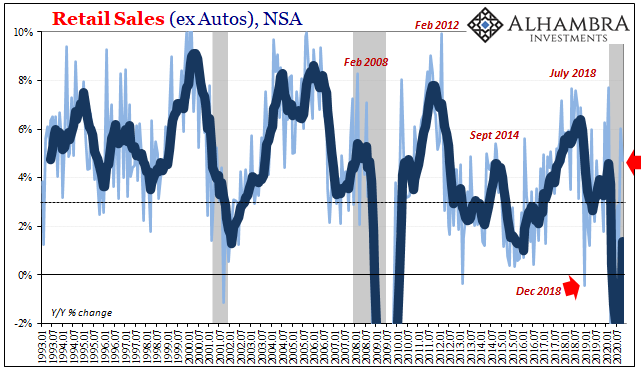 In seasonally-adjusted figures, spending had stumbled slightly in July before accelerating in August and especially September (up 1.57% month-over-month). October, however, the monthly gain wasn’t much of one at all, just 0.25% or nearly flat. That’s what’s gotten so much attention.

Ouch! US retail sales growth has dropped to a six-month low…Retail sales only rose by 0.3% in October, disappointing economists who expected a 0.5% rise…Growth is better than the alternative for retailers, of course, but this does flash warning signs that the US economy is slowing this quarter. It’s the weakest monthly rise since the spring lockdown ended.

It had been hoped (expected, in the “usual” places) how QE combined with Uncle Sam’s unchecked checkable generosities would have filled in the gap created by such a large dislocation. In doing so, especially QE’s anticipated positive contributions, there wouldn’t have been enough time for negative (procyclical) economic factors to show up, hinder recovery, and create more longer run damage.

Monetary policy’s role was mainly about the future, not printing actual effective money (badly needed) for today. Since the Fed can’t even define money, and stopped trying forty years ago, expectations management instead focuses on feeding people an inflationary story the central bank would like them to comprehensively absorb.

So thoroughly, once convinced the Federal Reserve has been absolutely reckless with the money printing machine you (incorrectly) presume it has in its possession, you go off left with only the one option to spend as much as you can today on goods, services, or, if you’re an employer, hiring more labor because consumer prices in this story are only going to rapidly accelerate.

Should the economy instead slow down, meaning workers, consumers, and businesses not taking such inflationary risks, then that would strongly suggest QE hasn’t convinced people about the central banker version of the future.

Retail sales were, again, among the very few even suggesting success had been possible – and that was arguable. While closer to an actual “V” than everything else, it still wasn’t one (only a little better than maybe half) and in October the possibility of a setback calls into question what’s really happened underlying.

If it’s all been about Uncle Sam with no inflationary expectations for next year, as it sure seems to be in everything else (below), then that must mean procyclical economic factors have materialized and these would better explain what we’ve seen since June and July. 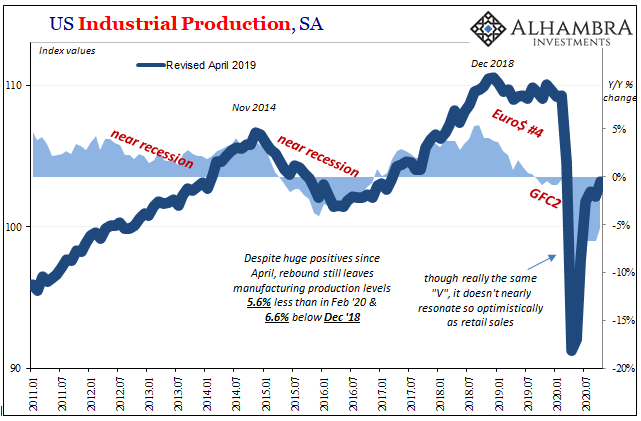 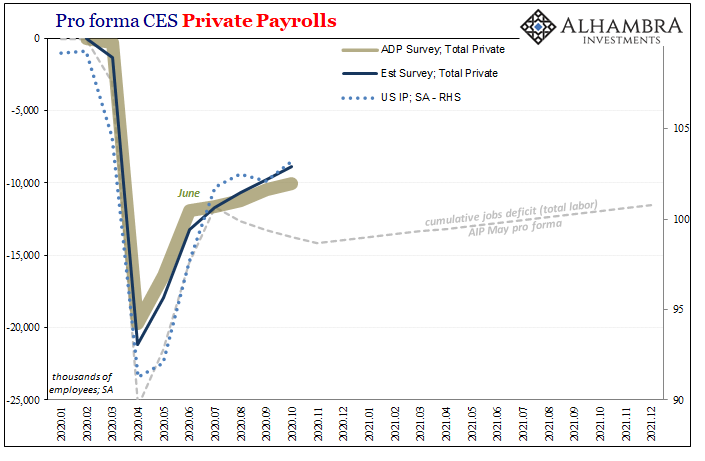 And those would be nothing good for 2021.

It is almost certainly those rather than QE-inspired inflationary fairy tales which occupy the minds of the economy’s production sector. Also today, the Federal Reserve reports that Industrial Production in the United States rose somewhat in October from September, but remains deeply in its recessionary trough because around July there almost certainly had been a material slowdown in the rebound (therefore not COVID).

It’s exactly like we’ve seen in countless other data series; the initial few months of the reopening frenzy were powerful and gigantic. Once people were “allowed” to go back to work, and get back to something like normal, multitudes did. But it wasn’t everyone; in fact, way, way less than everyone.

The contrast with retail sales, therefore, is significant. Producers aren’t buying the economy portrayed by retail sales (and not at all buying the QE stuff). With production levels substantially less, and slowed since summer, no one is taking risks impounding greater levels of inventory that typically denote the risk-taking behavior common to what we call recovery. 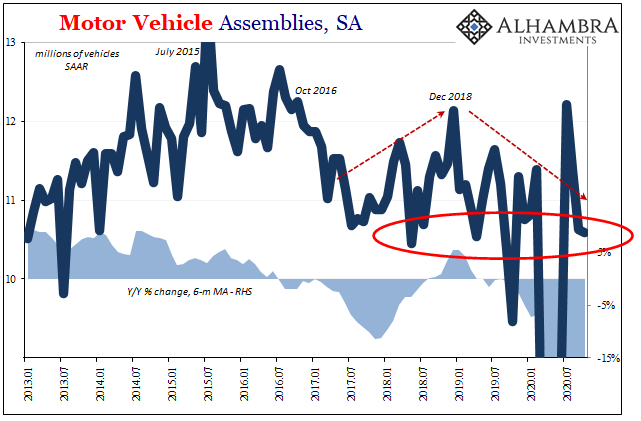 Instead, on the production side the picture remains one of palpable caution. Even in the auto sector, Motor Vehicle Assemblies (IP’s version of vehicle fabrication) were in October among some of the lowest of the past few years. At around 10.5 million (SAAR), that’s actually consistent with the downturn rather than the gigantic positives of what was supposed to have been an uninterrupted “V-shaped” rebound.

Accord to Census, auto sales in October were up by more than 10% when compared to the same month in 2019. The BEA, on the other hand, projects auto sales were down more than 3%. While the latter estimates only units and the former total sales, including price changes, there isn’t that much inflation in new car prices to explain this widening discrepancy. 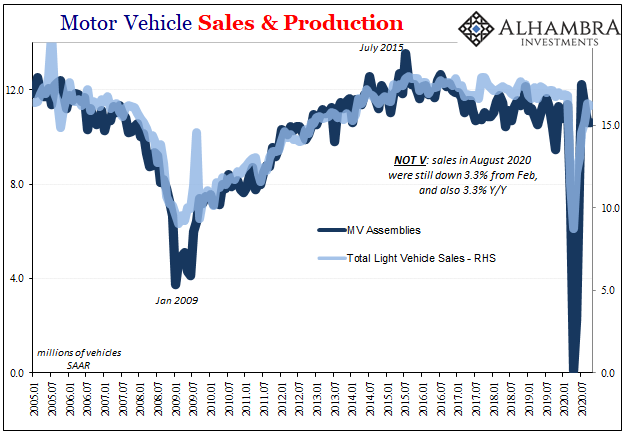 And it sure seems like auto producers might have been thinking (hoping?) Census had it right – up until the past few months. Even after shutting down completely and missing, basically, three full months of production therefore having foregone about one-quarter of annual revenue, automakers here (as well as around the world) just are not in any rush to make up for it. Rather, in the US, assembling new units at a conspicuously low rate suggesting the opposite of unbridled risk-taking predicated on super-inflation 2021.

Hardly autos, either, there’s also no rush to renew oil mining. As we’ve noted for some months now, domestic crude production has essentially flat-lined only slightly above the lows. In IP terms, the estimated level in October was an enormous 16% below the February peak. 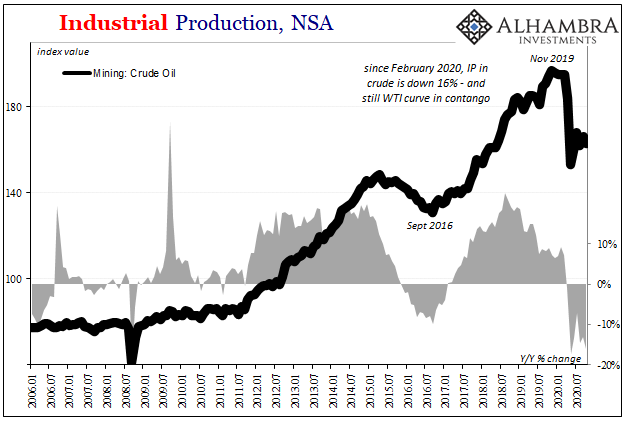 The WTI futures curve remains in contango anyway. Not exactly a robust, inflationary view on the near and intermediate terms from both the demand as well as production sides.

Industrial Production adds even more to the long list on the side of the unwanted, QE-didn’t-work-at-all summer slowdown. The opposite side of the ledger, already thin, retail sales get called into question for at least October.

No wonder how even after two COVID vaccine announcements in as many weeks, there has not been the smallest hint of an actual BOND ROUT!!!! A vaccine is great news…for 2022. Between now and then, the evidence continues to show how we will likely have serious economic problems to confront first. 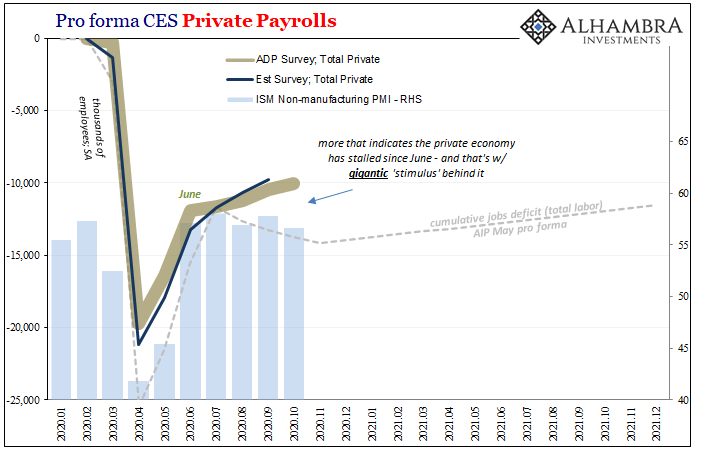 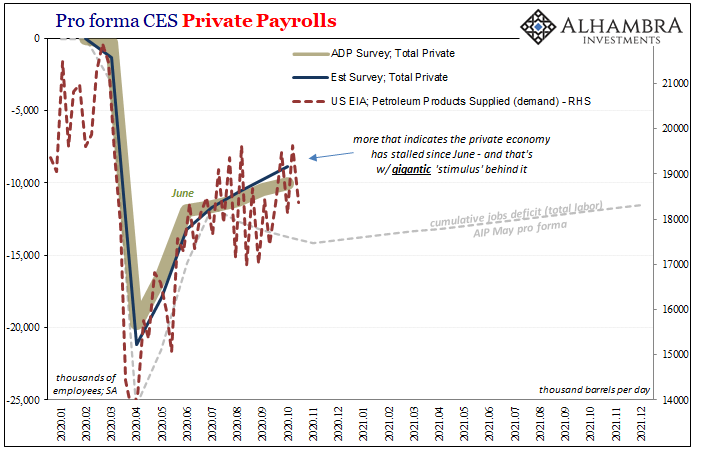 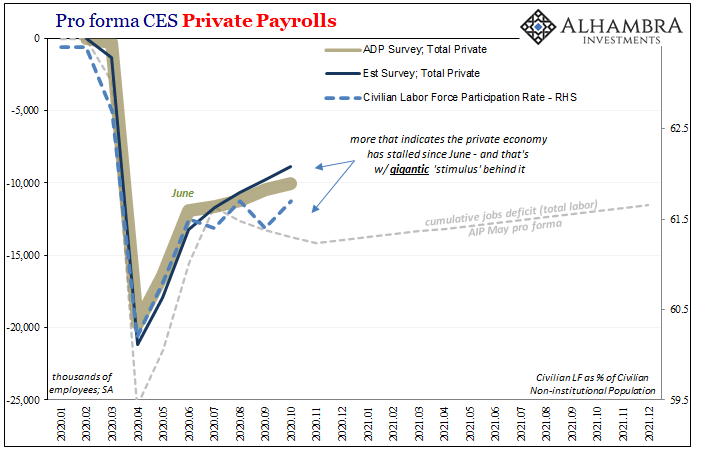 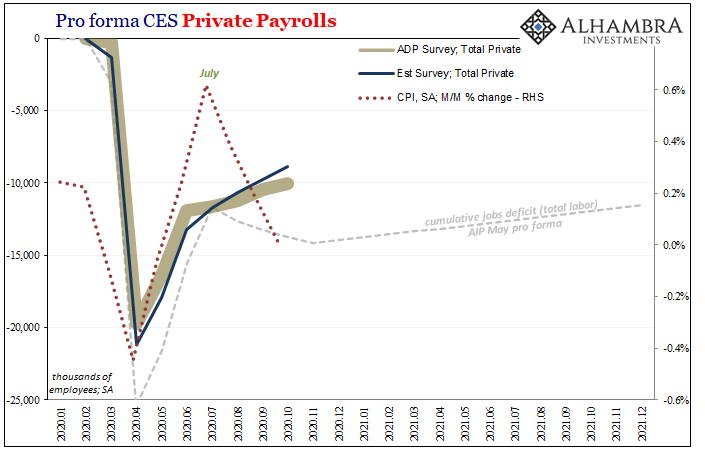 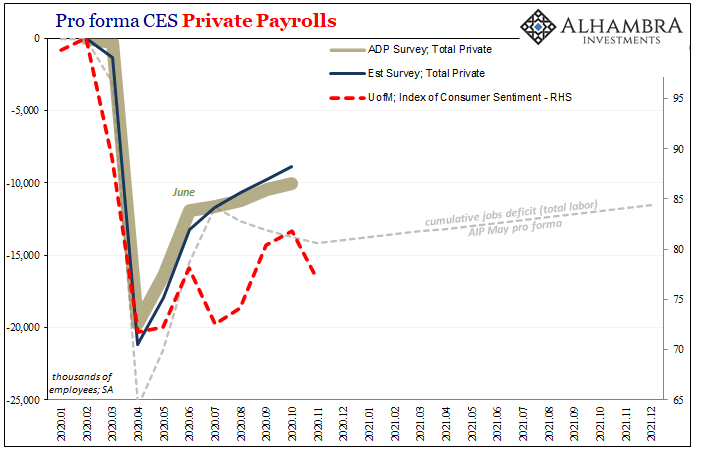