Just Who Is, And Who Is Not, Selling T-Bills

Just Who Is, And Who Is Not, Selling T-Bills

Are foreigners selling Treasury bills? If they are, this would seem to merit consideration for the reflation argument. After all, the paramount monetary deficiency exposed by March’s GFC2 (and the Fed’s blatant role in making it worse) was the dangerous degree of shortage over the best collateral. Best collateral means OTR, and for standard practice this had always meant Treasury bills (as well as, noted yesterday, bonds and notes just auctioned off).

According to the TIC data updated through September 2020, yes, foreigners (both private and official) have been “selling” bills. During the month of September alone, the total was -$30.3 billion (net), split somewhat equally between FOI’s (foreign official institutions) and overseas private financials.

Not only that, TIC had revealed a good deal of selling (private; -$12.4 billion) in bills during the month of July, too.

It had followed the three previous months (April, May, and June) when the buying (net) of Treasury bills (+$311 billion cumulative) was just shy of the heaviest on record (October, November, and December 2008; +$321 billion). Therefore, the possibility appears for significant improvement: collateral shortage = huge buying earlier in the year; then less collateral shortage maybe even reflation = selling, with it possibly picking up in September. 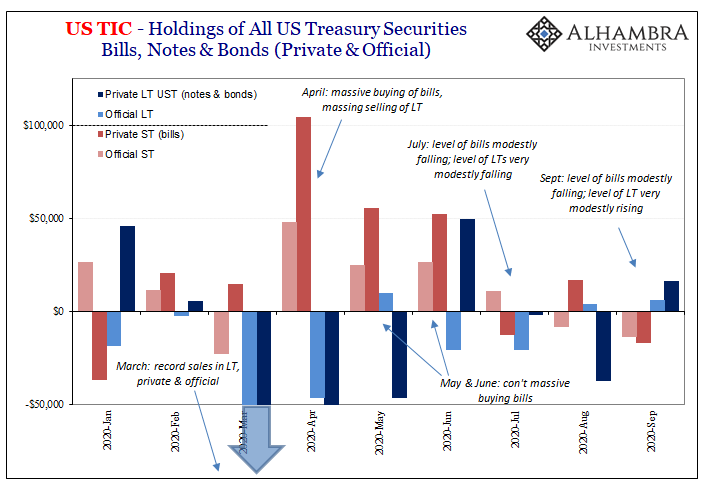 What’s really going on here, however, is more basic and, unfortunately, unrelated to what foreigners may actually want. The federal government, like the Federal Reserve, cares nothing about broader money market conditions and even less when they relate to overseas participants in them (the irony being TIC, which by accident collects some of the best data on cross-border bank and money activities).

As the Fed had been stripping T-bills from the repo marketplace during late 2019/early 2020’s not-QE, the Treasury Department has been auctioning off substantially fewer bills since the end of June.

The reason for this change is standard debt management practice. Whenever a government is confronted by an unexpected and unexpectedly large fiscal shortfall, as in April 2020 due to the CARES Act made law at the end of March, the immediate debt needs are filled by the issuance of short-term securities. In years past, that had meant securities of indebtedness along with straight bills.

Whatever shortage in bills as the collateral bottleneck became all-too-real, as we had been warning for years before then, once more by accident Uncle Sam (partly) filled a huge need. The market was flooded with brand-new OTR paper by the hundreds of billions – and the Fed, for reasons it won’t and can’t adequately explain, stayed the hell out of the way this time (massive QE from March forward focused on OFR on purpose; hardly any bills were bought).

Prudent debt management, however, demands that over time borrowing maturities shift and get termed out. Rather than rollover short-term debt at huge amounts forever, as the months go by and longer-term security auctions aren’t overwhelmed (they never are), Treasury starts to sell more and more notes and bonds on purpose leaving fewer bills which need to be continuously rolled.

That’s exactly what the government has been doing since late June; fewer bills, lots more notes and now a few more bonds. 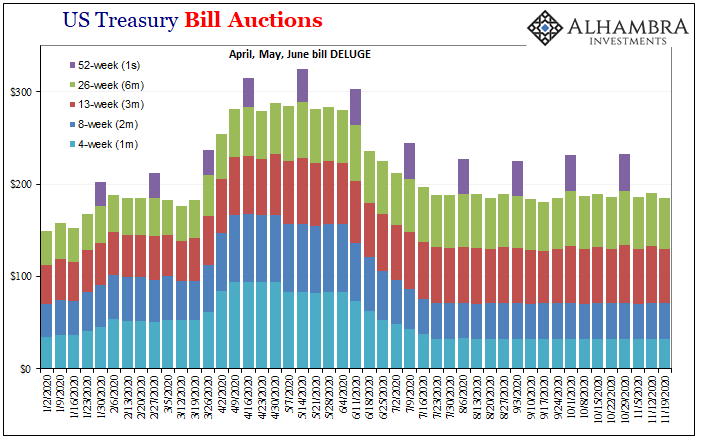 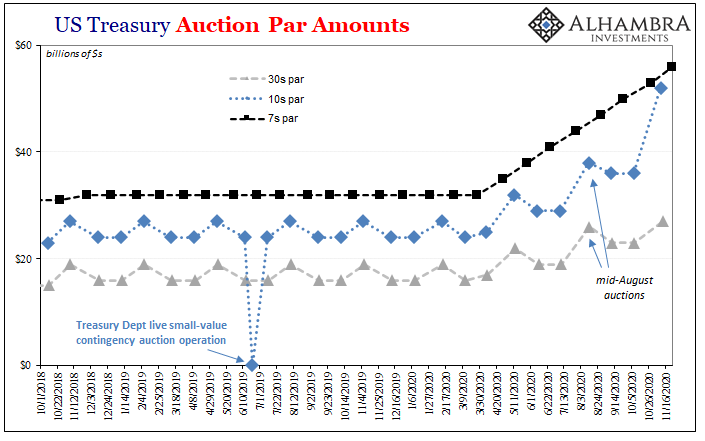 By the end of July, there were significantly fewer 4-week and 8-week bills being sold off, while only slightly fewer in 3-, 6-, and 12-month maturities. What that would’ve meant as far as TIC and foreign holdings of bills, 4-week bills auctioned at the top in June started to come due in July and were not rolled over at the same par levels (therefore, “selling” bills in July may have been instead “maturing”).

Eight-week bills at the peak end of June began to expire at the end of August, meaning for the month of September the last big flood of 2m had come due and wasn’t replaced because it couldn’t have been by Treasury’s choice.

According to TIC, there are still hundreds of billions in bills picked up by foreigners during the April-June deluge which, when the Treasury Department decides to cut back in the longer tenor bills, too, would mean even more bill “selling” in the months ahead.

What’s more interesting as far as our purposes go, dollar shortage stuff, is that despite the maturities in bills (and more in corporate bonds), the foreign sector (official and private) hadn’t bought more UST notes and bonds (LT) than what was reported by TIC. It was only a very modest increase: official net buying of LT UST $6.1 billion in September versus net “selling” of $13.5 billion in bills; private net buying of LT UST $16.4 billion despite net “selling” of $16.8 billion in bills and $29.9 billion corporate bonds (discussed previously). 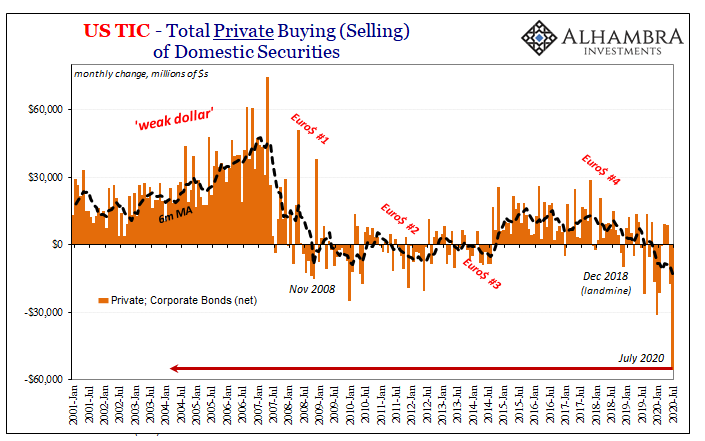 There are, of course, other asset classes than UST securities at either end of the yield curve, but the point remains that what’s indicated despite this kind of forced maturity rotation isn’t overall the same amount of dollar assets we’d expect during reflationary conditions. Bill holdings down, bonds up just a little, plus a whole lot fewer corporates shows that there still are fewer global dollars readily available.

Foreigners aren’t rotating out of bills, Uncle Sam has. What that might do to the collateral markets of late 2020 and 2021, I guess we’ll see. One thing it’s already done, other than once more demonstrate how little these people know (or care to know) about the monetary system and its inherent flaws and faults, is push bill yields down, down, down. It may not seem like much, but equivalent yields have been creeping lower and are several bps below where they had been just a few months ago. 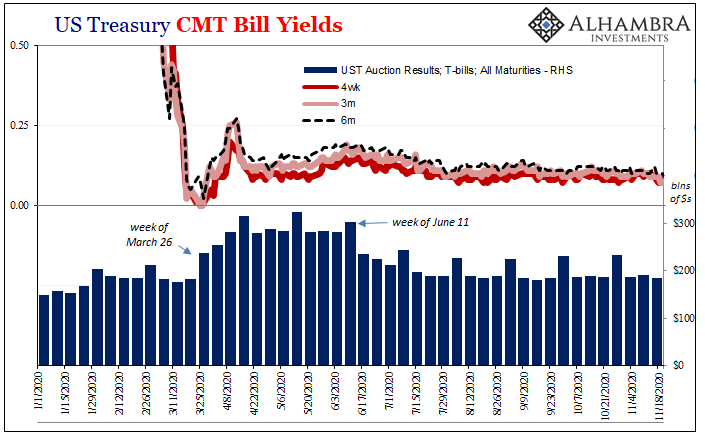 It has been during these months when markets seem to have hit a summer (slowdown) snag (which the current vaccine-phoria hasn’t changed all that much).

In other words, supply has changed in the bill market though demand apparently hasn’t. It’s certainly not what it was in March and April, elevated nonetheless (especially recently).