Sticking with our recent theme, a big part of what Inflation Hysteria #1 (2017-18) also had going for it was loosened restrictions for US oil producers. Seriously. Legacy of the 1970’s experience depending too much on OPEC, subject to embargoes, American oil companies had been prohibited for decades from exporting oil. Not that it would have mattered before 2014, the country never producing near enough to have ever done so.

Export limitations removed, shale boom well underway, export crude they did – and right into the mix of TCJA and globally synchronized growth. The WTI curve still in contango up until mid- to late 2017, the sudden rush of black gold from the US to foreign shores absolutely helped rebalance the domestic market setting up the WTI curve for its hysteria-aligned shift back into backwardation. 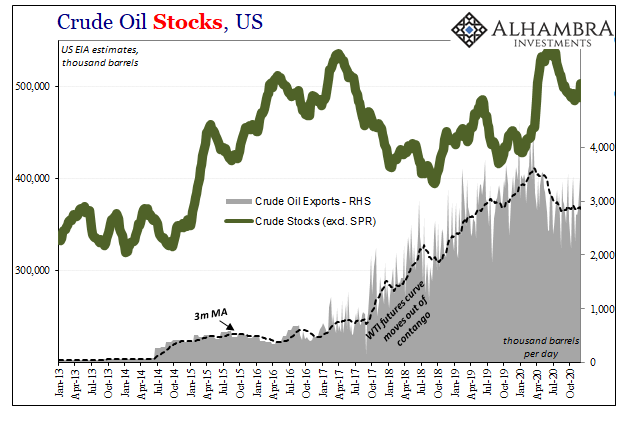 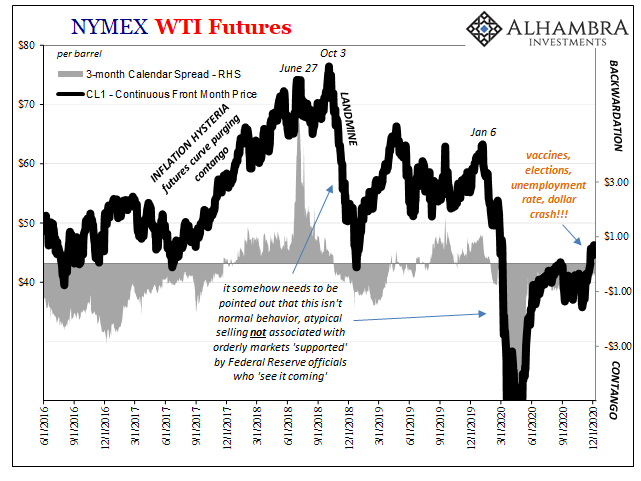 With more customers for US crude oil, inventories relaxed as the backwardation buoyed the domestic benchmark oil price setting the CPI up for higher returns. TIPS trading, therefore at least shorter run inflation expectations (breakevens), followed along (as did longer run expectations if to a lesser degree).

While clearly a period meeting the textbook definition of hysteria, there was at the very least some consistent even rational basis underlying it.

This Inflation Hysteria #2, by contrast, runs on…hope alone. Vaccines and massive government aid are tossed around as if dei ex machina magically fixing the huge economic mess (piled on top of previous massive government aid that hadn’t fixed the mess). Though not really growing in 2017 and 2018, the background economy wasn’t anywhere close to this bad.

Nowhere is this disconnect more apparent than oil.

The fundamentals for crude continue to be crudely atrocious – and getting worse by the week. Start with global demand for American products; as you can see above, exports are down, and remain down, by a whopping 22% from mid-March. One consequence, oil inventories continue to pile high even as domestic production has been cut by about 16%. 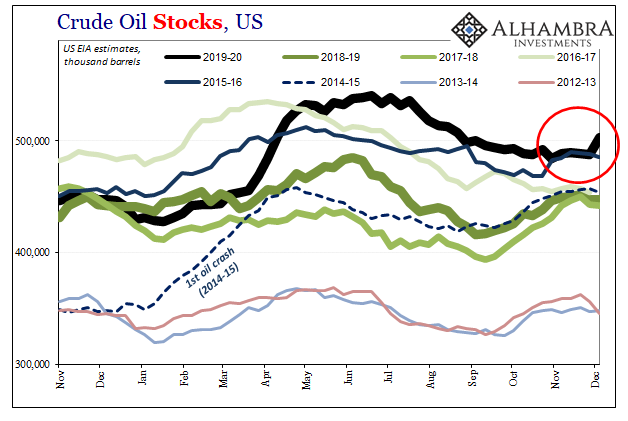 And that was with crude stocks already stuck at record highs for this time of year. Typically a period of mild seasonal accumulation in oil, inventories had already been accumulated in the global recessionary downturn earlier in 2020. It had been expected (little more than hope, really) the “V”-shaped rebound would reshape the oil market by drawing down inventories while production scaled back, allowing an eventual return to more like normal.

Instead, these remained high, incredibly high, and last week spiked even higher. Distillate inventories are equally as problematic, with gasoline stocks also at record highs just as seasonal accumulation begins for this segment. 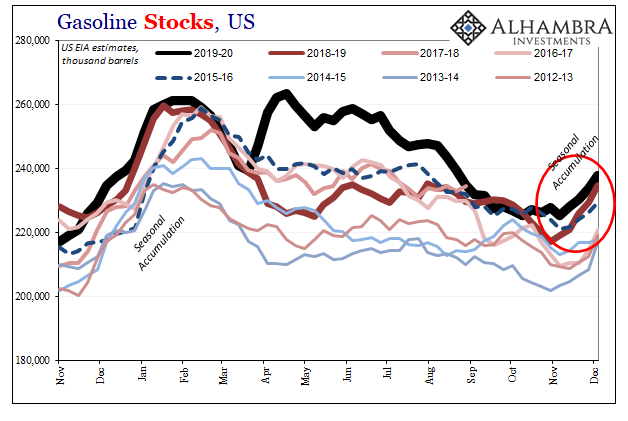 The lack of recovery in the global economy, therefore US oil exports, isn’t the only culprit. In fact, domestic demand is by far the bigger problem. According to the US Energy Information Administration (EIA), the same outfit which put together the inventory and export data, US demand for all crude products – but especially gasoline – indicates only ongoing massive recession.

Even as normal seasonal usage declines, this year the decline has been more than normal seasonality. This incredibly persistent, and persistently large, shortfall has been evident since the middle of June. The summer slowdown has absolutely consumed the entire autumn, too. 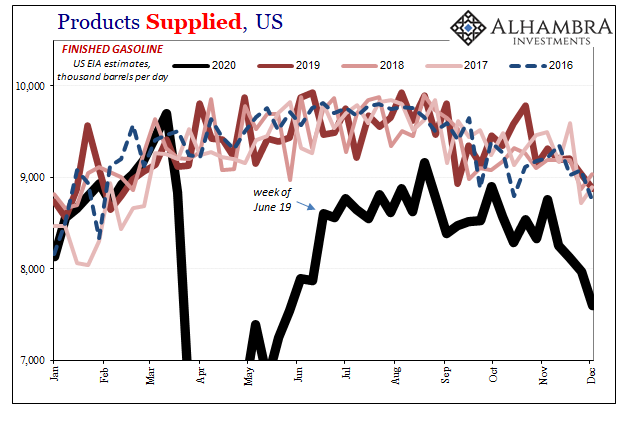 Just how far off is it? In the latest week, finished gasoline “supplied” (a crude measure of demand) was 14.4% less than it had been in the same early December week of 2019; and nearly 16% below the same week in 2018. Unbelievably awful.

With these kinds of imbalances all across the energy complex, how in the world are oil prices up from mid-November? Vaccine-aphoria, dollar crash-ness, and the rest of the completely unsupported successor to Inflation Hysteria #1. This second round is so much less impressive, which is understandable why, in market pricing, it actually isn’t nearly so out of whack as the inflation-is-already-burning rhetoric.

Market reaction has been understandably muted; it’s in commentary surrounding it that the hysteria has been recreated.

In other words, oil prices are up modestly, an achievement, but not all that much; the WTI curve compressing its contango, though still contango even after nine months of one-sixth to one-fifth of all crude production sidelined. 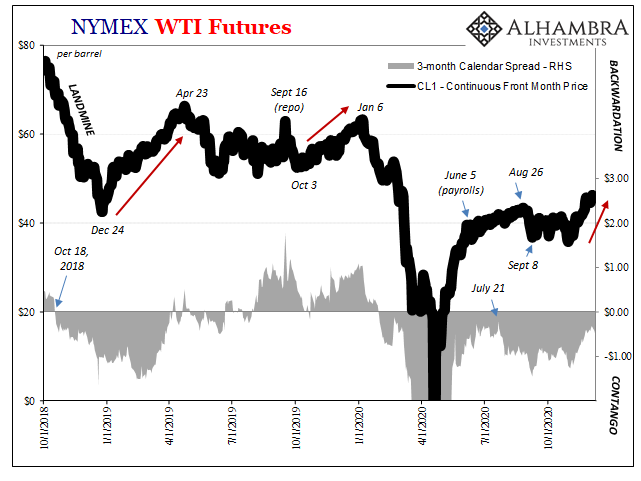 Most important factor of all, especially when it comes to economic demand, there actually had been employment and economic expansion during late 2017 on into early 2018. It never acclerated to meaningful levels, was clearly over-estimated, called globally synchronized growth, still reflation anyway. 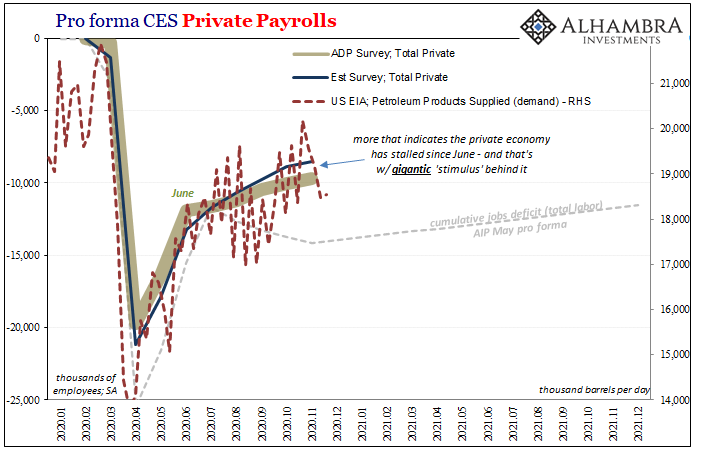 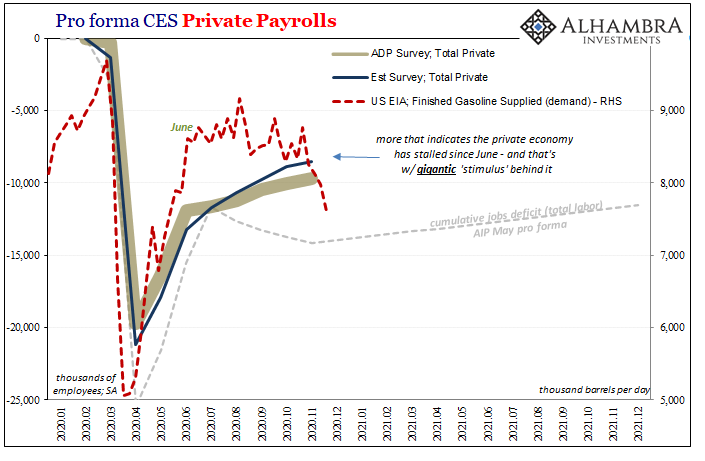 Positive numbers appear in all the economic accounts, but this is nothing like even a minimal expansion such as 2017 had exhibited. What made Inflation Hysteria #1 so hysterically unwarranted was making a dollar-crashing inflationary inferno out of a small bout of economic progress. It wasn’t much, but the world system actually was moving somewhat forward.

Inflation Hysteria #2, on the other hand, it features all the same dollar-crashing inflationary inferno talk with none of the plausibility of its predecessor. Instead here, the world system isn’t even moving somewhat forward, the US and global economy still trying (and failing, that’s the point) to dig its way out of a recessionary trough that even now is substantially larger than the worst parts of the Great “Recession.”

Particularly when it comes to employment, work, and labor. 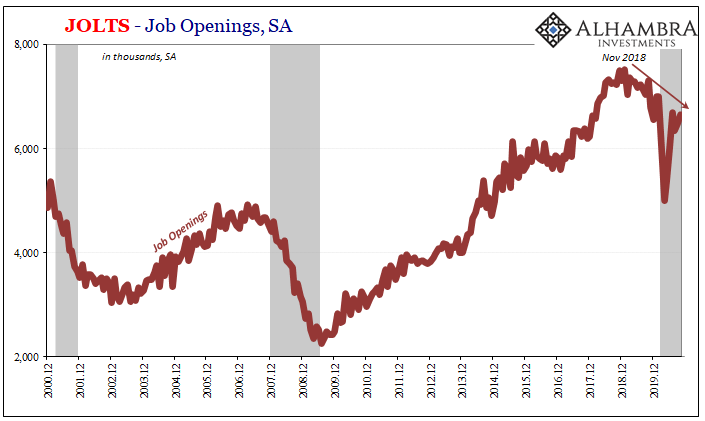 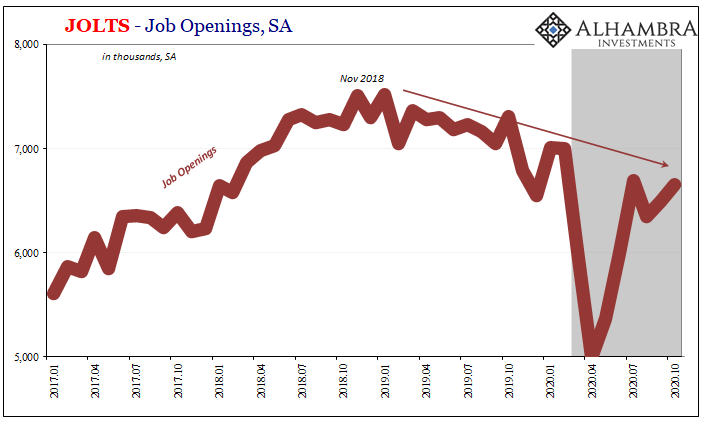 Not that we needed it, the BLS today provides even more confirmation along these lines. The JOLTS data merely repeats the oil data; the economic rebound, such that there had been one, while still ongoing it’s not at all the same thing as it had been up until June or July.

In JOLTS, that has meant fewer posted and recorded job openings which, rather than pull modestly upward toward more rebound, have been stuck for months now in the downward line of the prior, pre-COVID downturn tracing back all the way to 2018’s landmine. US employers should be posting record levels of openings, huge increase in demand for workers, instead even after a huge contraction they’re still cutting back.

Unsurprisingly, if demand for labor isn’t robust neither would be the completed processes of procuring it. JOLTS Hires has been trapped, too, after only two months consistent with the initially sharp upswing. Since July, less this year than last year when last year’s labor market had already sunk into a pre-recessionary state. 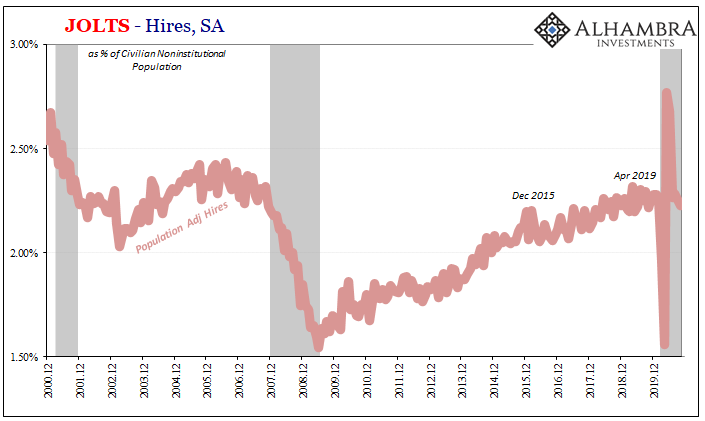 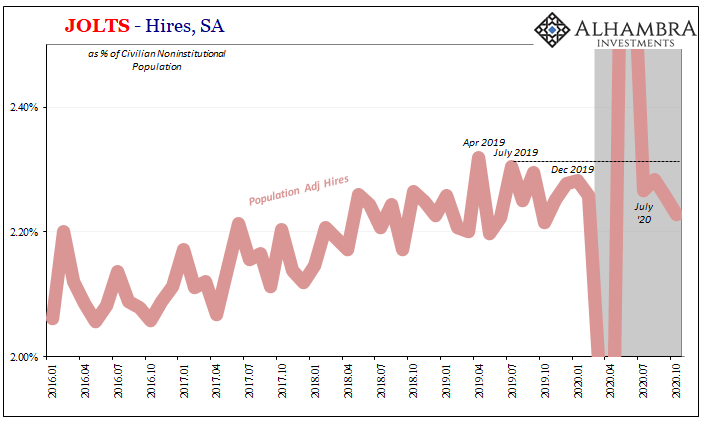 Inflation Hysteria #2 has matched Inflation Hysteria #1 in its passion and in its uniform acceptance across the mainstream narrative. However, it has none of the (ultimately misleading) attributes the first one could at least point out; the big mistake was in making more out of what was there. This time, there isn’t even anything there.

It certainly hasn’t been economic fundamentals which have modestly pushed up WTI, therefore more short run inflation expectations. Instead, pure hope that vaccines and huge government spending will render everything you see around you now moot. Compared to late 2017, it’s an even bigger gamble and likely setting up for an even bigger mistake.

And Inflation Hysteria #1 really did turn out to be an enormous blunder. Not that anyone will (fully) admit to it. 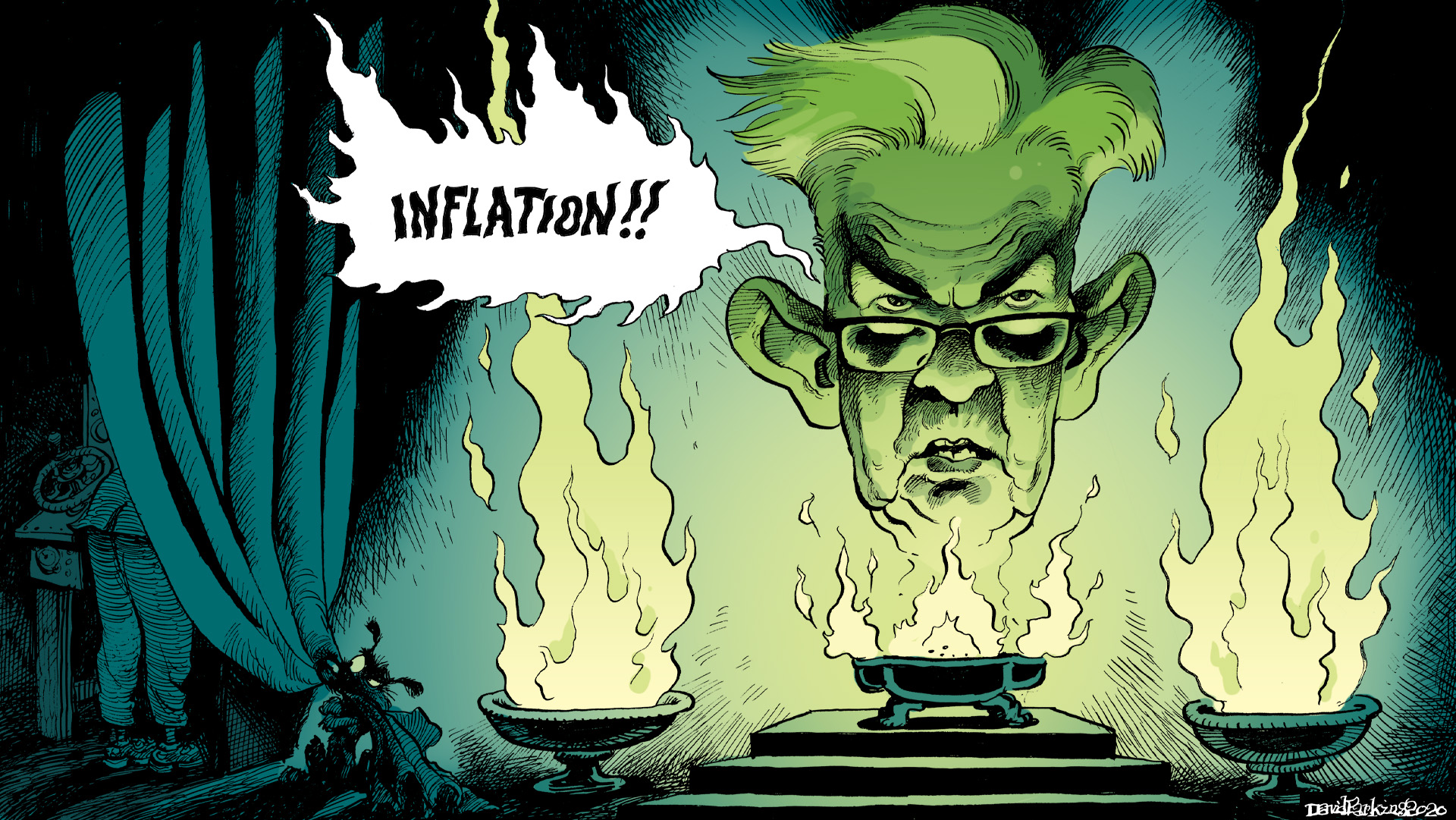 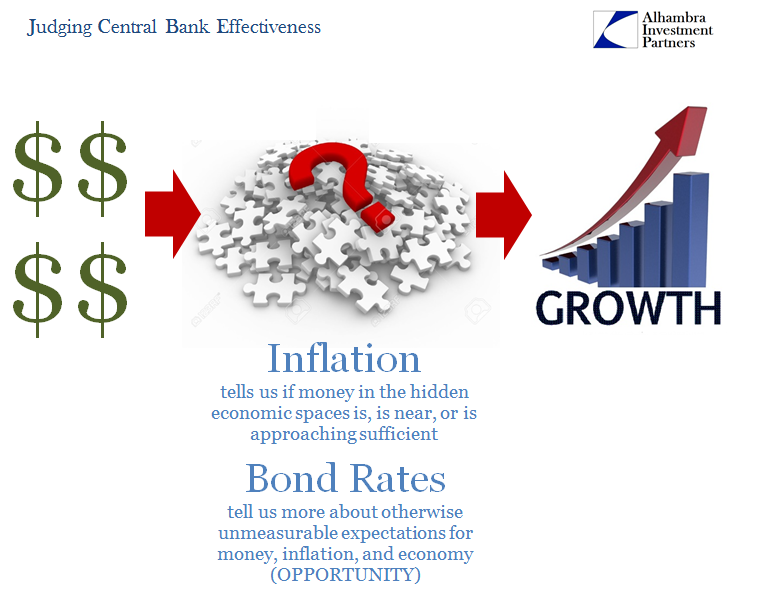 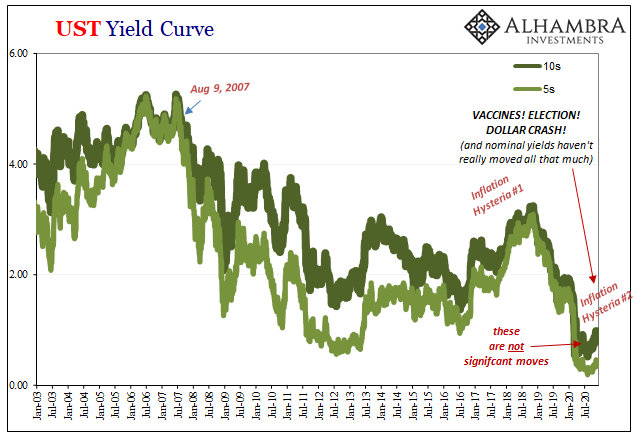