Talk About Putting All Your 蛋 In One 篮

Talk About Putting All Your 蛋 In One 篮

I’m not exactly sure how you translate the English word “hope” into Chinese, though Google’s translate algo tells me this is what it’d be: 希望. For the global economy to have any chance of just making next year less awful than it’s already predicted to be (by the optimists), the OECD declared China essential to the fanciful anticipation.

As noted before, and again recently, these people had the audacity to declare this unqualifiable disaster as somehow akin to hope. 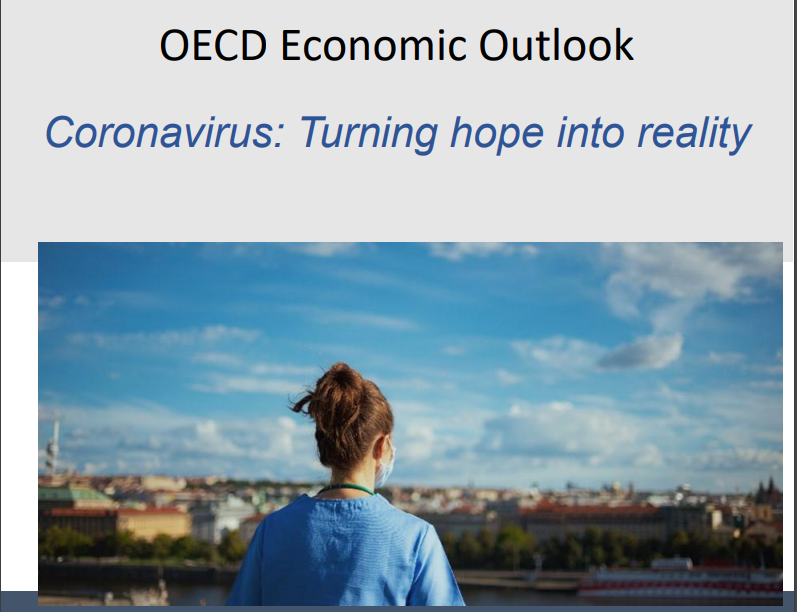 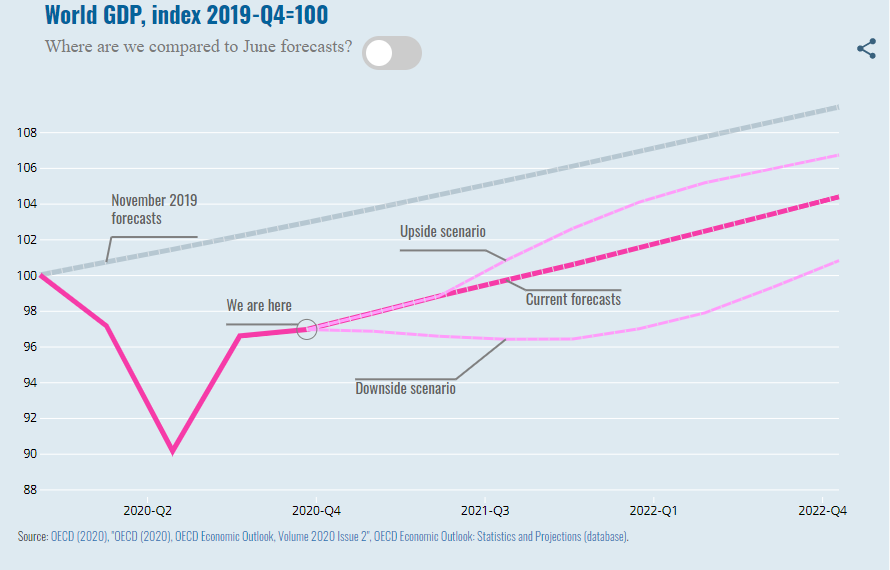 To merely avoid their “downside scenario” the organization’s econometric models are relying heavily on the Chinese economy for much of the lift. How much?

The global economy is expected to gain momentum only gradually, as vaccines are deployed throughout OECD countries in the course of 2021. After falling sharply by 4.2% this year, world GDP is projected to rise by 4.2% in 2021, with China expected to account for over a third of that growth.

Talk about putting most of your 蛋 in one 篮.

You can’t blame the OECD for at least these assumptions – you can and should excoriate them for their characterization of this situation as anything other than what it really is, and it is not hope. China has been the center redistribution node for global growth over the past three decades. As the Chinese went, so would the world.

Nothing has changed so far as that goes.

Except, there was a predicate step in place before growth could show up inside the Chinese “miracle.” It’s not a world economy made in China’s image so much as socialists attempting to stave off their own extinction using capitalist means, above all the eurodollar’s fuel and finance.

More eurodollars, more miracle for China. The rest of the world boosted by what the Chinese imported to complete their part of it. Globalization, they called the thing.

Suddenly, 2008, fewer eurodollars and only a few more years left before China, too, would succumb to the same dreaded dollar disease. One recent sales email I received from a research outfit showed that in some parts of the discipline people are catching on at least to the first part of the systemic deficiency:

China is reflating, its economy is recovering and risk assets around the world are thriving. Since 2010, Chinese policy mistakes have been a party spoiler, causing deflationary slumps. These include monetary tightening and credit destruction in 2012, 2015 and 2018, all of which had significant global ramifications.

Will Beijing make the same mistake again? How do we monitor this risk? What is the appropriate investment strategy?

I trust you will find this research report to be both timely and insightful for investment strategy.

“Chinese policy mistakes”, too much “monetary tightening.” True, sure, but only half the story.

And it shows. The Chinese National Bureau of Statistics (NBS) reported today that deflation has taken hold in its economy. For the month of November 2020, and for the first time since Euro$ #1 (2009), their annual CPI change returned a negative number.

Outright deflation has returned, and it has done so nine months into reopening and supposedly recovery. Massive “stimulus” in there, too. 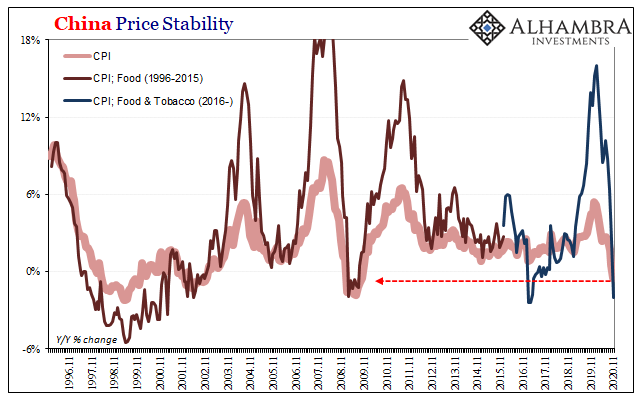 Consumer prices, in broad terms, fell 0.5% year-over-year. Food prices are responsible for some of the deflation, with the pork problems being mediated, but in other sectors there’s as much negative pressures. Non-food prices in China’s CPI were down (0.1%) year-over-year last month, too.

Demand internally cannot be anything other than still seriously weakened.

Producer prices likewise continue to fall, indicating the same but including the external economy. The Chinese PPI dropped by 1.5%, with factory gate prices declining 1.6% compared to the year before. While those represent a modest improvement from discounted pricing over the months before, it’s really not all that much nor anywhere quick enough to suggest overcapacity isn’t still a dominant factor. 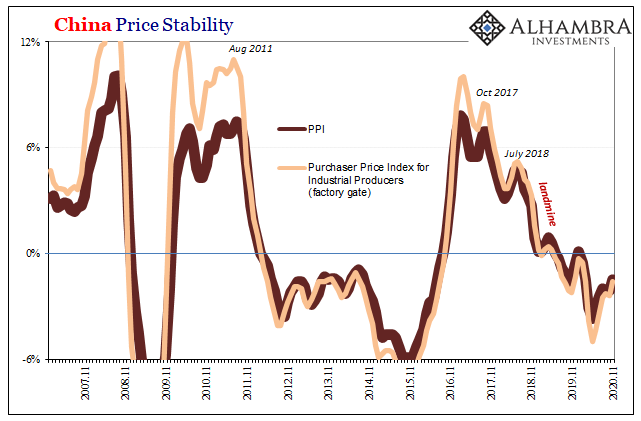 Earlier in the week, China’s Customs Bureau had reported imports into China were only 4.5% higher in November 2020 than in the same month of 2019. Going back to 2013, the start of Euro$ #3 which had led to worst pair of the dollar-driven “Chinese policy mistakes”, China imported only about 14% more last month than it had in November 2013 seven years ago.

The trend, at least if the OECD’s hope-filled “a third” contribution is to be believed, would need to accelerate impressively at some point (and it really should have by now, if it was going to). The lack of Chinese demand for the world’s raw materials instead puts the rest of the global economy into the same bind it has been in for about the last seven years.

The same seven when the global dollar shortage was focused on Asia and emerging economies. 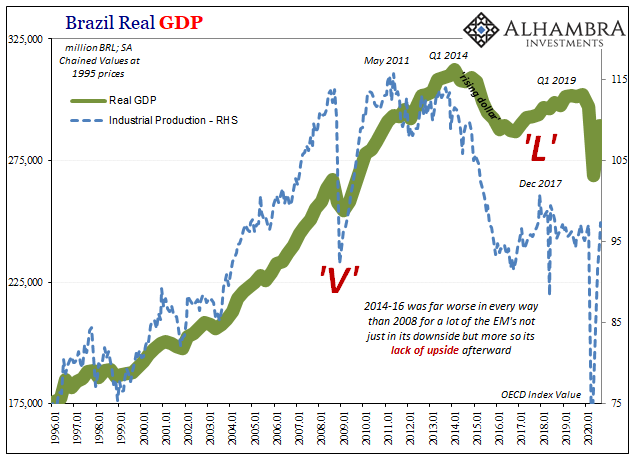 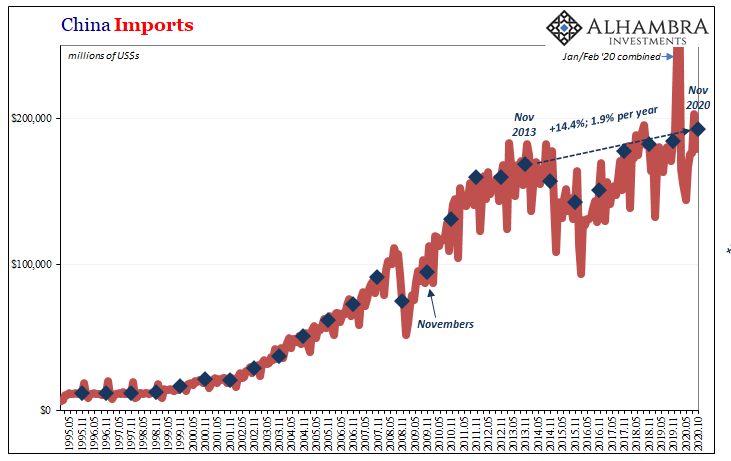 If the Chinese economy is going to step up like the OECD requires just to make a partial global recovery plausible, it had better get to it. That it hasn’t yet is a big minus where plausibility is to be concerned.

Unlike the OECD, and the research outfit quoted, we know it hasn’t been “Chinese policy mistakes” which have held back global growth especially as it runs through, and depends hugely upon, China. Rather, as I wrote in March 2014 as the “monetary tightening” was developing again, the world at some point will really need to figure out the right money being tightened (and then who it is really doing the tightening; not officials):

Connecting all the dots, especially a few later ones which sprang up out of March 2020, Jay Powell says he flooded the world with digital dollars and that created the necessary conditions for global recovery. The OECD says, there won’t be a full recovery but it could be something sort of like one if China goes its full limit. The Chinese economy, in the meantime, demonstrates conclusively that it’s not anywhere near this nor in any shape to begin. 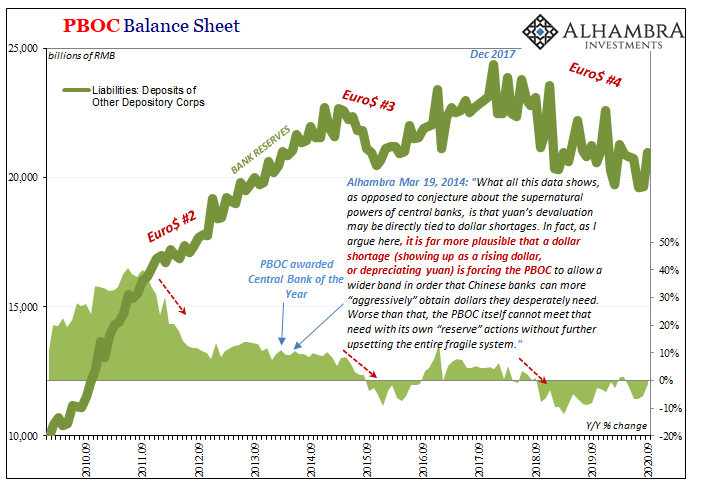 Bringing it back full circle, monetary tightening. Jay lied. What does that mean globally? The summer slowdown which has already consumed autumn is at risk of: devouring several more seasons into 2021; ending up as more than a mere, not merely dangerous, slowdown.

The greatest danger isn’t COVID, it’s having never figured out all the precise relationships behind these moving parts. As Henry George pointed out fourteen decades ago, a gross impediment in the machinery of exchange.