The Doctor Is In?

The Doctor Is In?

Gold’s not buying. Neither is the bond market. Inflation Hysteria #2 has so much less to it than #1 in 2017-18 ever did. But this one isn’t completely empty. There are some asset classes which have been absolutely on fire thus seemingly consistent with the “money printing” excesses of Fed and feds. Investors fearing for currency “debasement” and fiscal breakdown by piling into real and tangible assets in an obvious way.

Just not gold. Other commodities, however, particularly copper.

They call it Dr. Copper for a reason, and that reason is its situational proximity to real fundamental balances – or imbalances – in the real economy. As an industrial metal, there’s as much to its price in economy as what everyone is told to think about dollar currency. But in those instances where the two get together, combined there could be an inflationary indication supposedly like no other.

Or at least not nearly as deflationary as recent years. 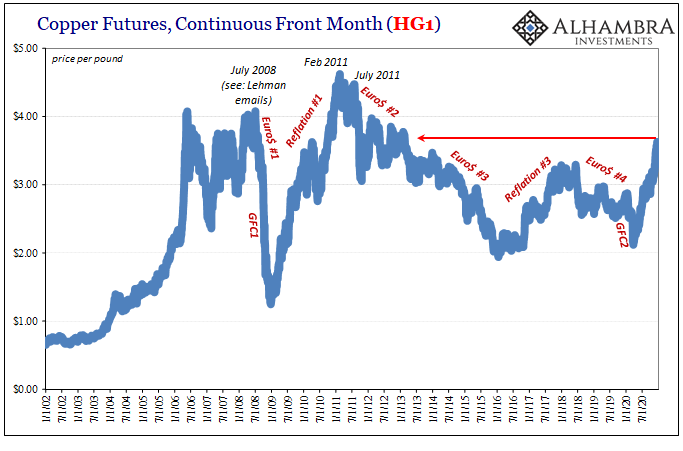 Late in 2020 is being talked about as if this is one of those instances. Perhaps, as some say, the most likely candidate for the long-feared final end of the US dollar and the inflationary inferno its collapse is purported to bring about.

So far as the good metal doctor is concerned, the price hasn’t been this high in more than seven and a half years. Surpassing the last cyclical peak during Inflation Hysteria #1, it’s not just that fact but also the manner in which it has come about; a better than forty-five-degree angle shooting up, like QE’s bank reserves, seemingly to the moon (though still much less impressive than during Reflation #1 with so much less “money printing”).

Not only that, look at exactly where the appreciation began: March 23. 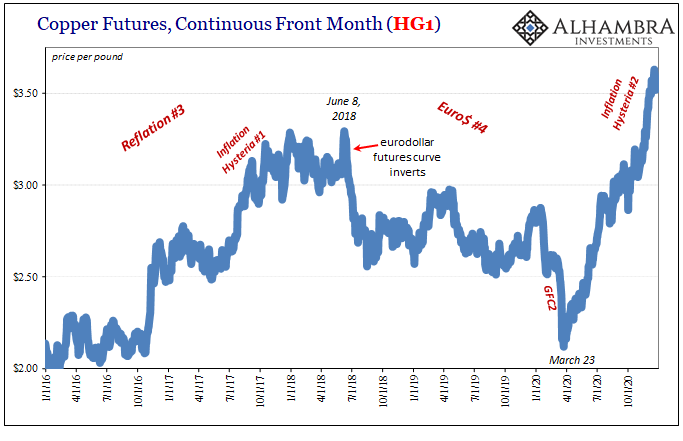 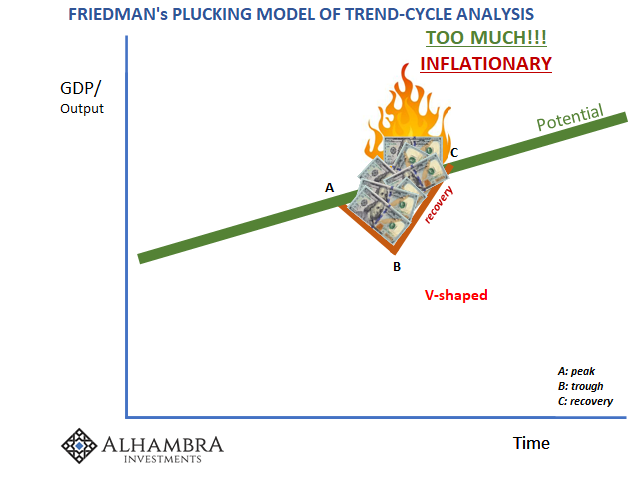 And it was post-COVID vaccine in early November which has given the price its latest leg higher, the most potent one yet. Turbocharging the buying to an extent that the inflation theory gains this apparently important multi-year high.

Like Larry Summers, is Dr. Copper signaling the imminent danger of Fed and feds having done “too much?”

If there is a problem placing too much emphasis on the mainstream view of its monetary aspects it often comes at the expense of the more fundamental elements to the price action. In this case literally.

For one thing, copper mines, particularly in Chile, were shut down earlier this year along with practically everything else. In many copper production sites around the world, mining has been slow to restart. As a result, copper supply globally will fall this year by a substantial amount, a rare occurrence.

The estimates vary, of course, but a recent one from Citigroup says global metal supply will drop 3.4% from 2019. Another from Macquarie indicates somewhere around -2.5%.

The copper industry had already been facing the prospects of a cumulative supply deficit in the long run. Basically, most or all of the easy pickings have already been depleted and Euro$ #3 did most of the metal mining countries no favors by shutting off required (dollar) capital to have begun turning exploration into investment before getting to production in the years ahead.

There’s a long lag time between finding where the copper is and beginning to get it out of the ground, and it takes an enormous and steady flow of eurodollars to get it done.

Forward-looking approximations made by UBS earlier this month, for example, forecast modest supply deficits (taking into account waste and reclaiming scrap) this year and next, very modest surpluses in ’22 and ’23, followed by larger and larger shortfalls out to 2030. UBS figures that the supply gap could reach as much as 10 million tons (out of estimated future demand of 34 mt) by that point.

In order to get ahead of that imbalance, copper producers would need to really ramp up investment right around…2015. But, like 2014-16, now’s not exactly the best time for monetary and credit flow, sorry Jay Powell, not to mention all the other problems related to the 2020 situation in most places around the world. The future seems to be one where supply bottlenecks become more of a problem and little economics (small “e”) can do about it.

Given that long run scenario, the metals industry had already experienced a severe bottleneck just this year. In the short run, too, the deficit created earlier in 2020 had left even the most nimbly funded users to scramble for material – especially in China. Uncertain as to the ultimate extent of the supply disruption, and with prices in the toilet for a time, this set off what seems to have been a true episode of hoarding.

Going back to UBS again:

Inventories on exchanges have fallen from ~550kt in Apr-20 to ~325kt now. However, we believe that China’s SRB and individual provinces engaged in stockpiling activity mid-year. This can be seen by apparent consumption which is +16% YTD in China, bottom up activity metrics elsewhere suggest real underlying demand would be ~5%.

This has exacerbated the metals deficit in the short-term on top of the longer-term picture which is, however it might work out, one where risks are entirely on the supply side.

Given this material disruption of material scale, the other component left to it is what’s supposed to be in demand. Again, mostly China. In these figures cited above there’s better than cautious optimism as to how the Chinese as well as others around the rest of the Emerging Market world are going to deal with the aftermath of the huge global recession of 2020. It is, of course, expected that policies will be highly “accommodative” for a very long time, boosting economic output on the way back up.

With that plus expected recovery from the trough, even a partial one, and now vaccines plotting a realistic end to the pandemic, there’s quite a bit of optimism about the intermediate term, too, on the demand side thus creating even more of a projected fundamental imbalance.

Short and long run supply problems mixing with vaccine-aphoria and Dr. Copper’s sent flying upward (note: it’s not just copper where these same imbalances have and are showing up, as inventory hoarding has been spotted in other industrial metals, too, as well as supply disruptions which have been even more severe). 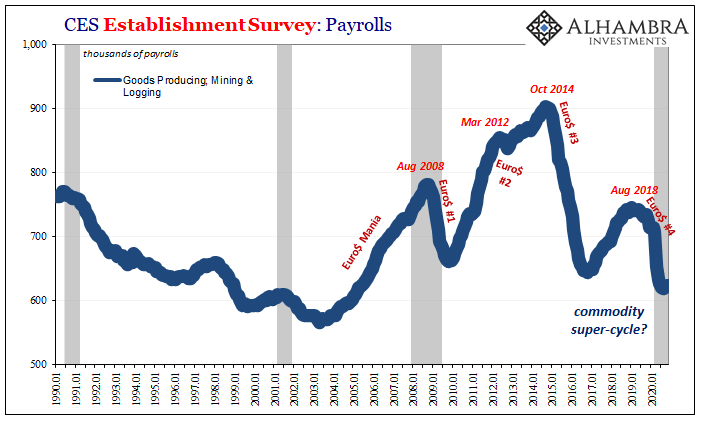 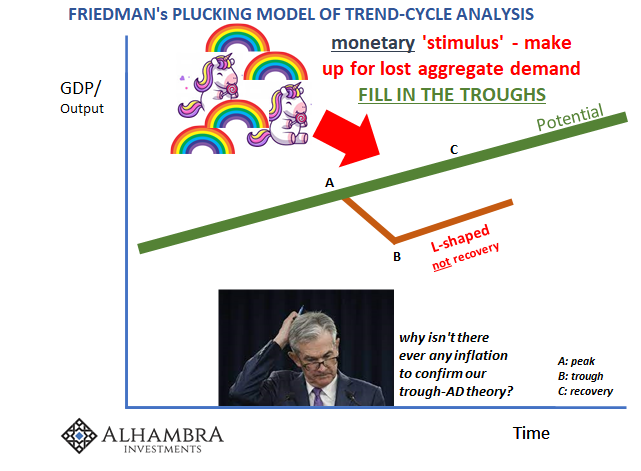 It’s not a “money printing” trend so much as, like oil, a negative story of economic activity held back by the repercussion of a deflationary posture. A good way to picture this, at least in the US, is using BLS data on the employment situation in the mining (and logging) industries (above). If there’s a commodity super-cycle forming here predicated on a price surge fed by too much Fed and feds, or even just a roaring global recovery China-style, then domestic producers sure aren’t ramping up their hiring (and short run output) in direct anticipation of it.

On the contrary (back to UBS on last time):

The copper price rallied during Q4 to an 8-year high of US$3.50/lb. This appears to be partially ahead of the fundamentals, driven in part by speculative buying.

In other words, classic supply bottleneck further amplified, as all these commodity commentators have noted, by the “money printing” speculators looking for something other than Bitcoin (also 2017 again) to insure against what they’re led to believe is a looming inflationary breakout.

Not even the metals producers – here or anywhere – think this is the case. Or if they do, they curiously aren’t moving very quickly to take advantage, being hindered by the very thing which, like 2017 into 2018, had thwarted the last inflation hysteria. In fact, they aren’t moving much at all which is really the entire point here.

With earlier copper hoarding expected to unwind over the months and year ahead, even the most demand-optimistic of these commodity watchers is expecting a modest pullback in the price during 2021. And these are mainstream Economist projections. Not to mention what’s actually going on in China, and it’s not massive “accommodation” by any stretch.

Supply constraints rather than Jay Powell’s name are all over Dr. Copper’s prescription pad. Thus, copper versus gold isn’t actually a direct comparison. Not yet, anyway. 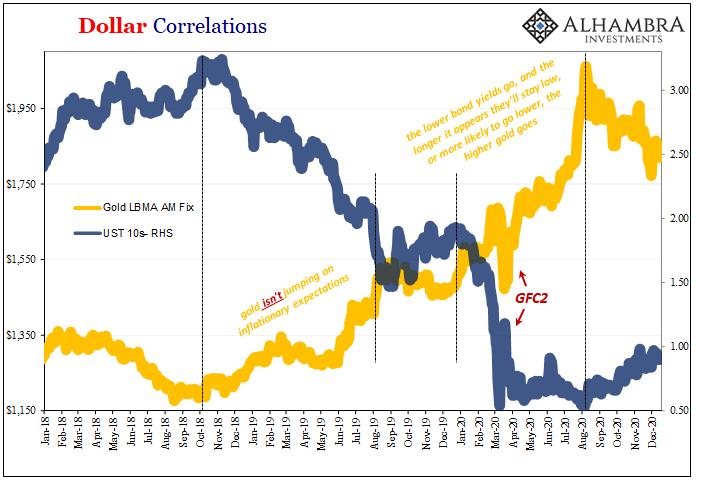