No Sharp Turns From China’s Potential

No Sharp Turns From China’s Potential

Most people can be forgiven for suffering the misimpression. Some of it is intentional, as reflation – and those selling it – absolutely require a healthy Chinese contribution to reach their strong global rebound. As we’ve documented over the last decade, it almost doesn’t matter what numbers China’s economy actually puts forward, that system is always “strong.”

The only time it wasn’t was understandable. In the first quarter of last year, the world was told about COVID and the “successful” shutting down of much of the Chinese economy to get this pandemic under control. Doing so necessarily produced a huge contraction during Q1, but then, contrary to the narrative, a rather sluggish rebound from it over the final nine months of 2020.

In last year’s final quarter, according to estimates released by China’s government over the weekend, real GDP increased by 6.5% when compared to the final quarter of 2019. This is being hailed as some kind of phenomenal achievement, especially in the words of the country’s Communist authoritarians who are transparently positioning their advertising in simple contrast to everywhere else around the world. They’re taking a “victory lap” over this:

China’s economy roared back to pre-pandemic growth rates in the fourth quarter of last year as its ­ industrial engines fired up to meet surging demand for exports, pushing the full-year expansion beyond estimates and propelling its global advance…The recovery from the biggest slump on record was engineered by getting Covid-19 under control and deploying fiscal and monetary stimulus to boost investment. 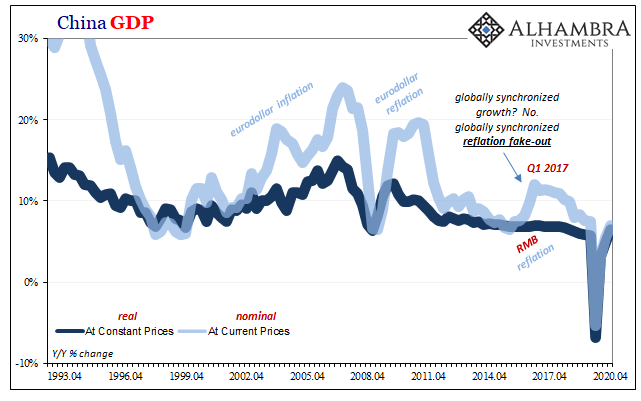 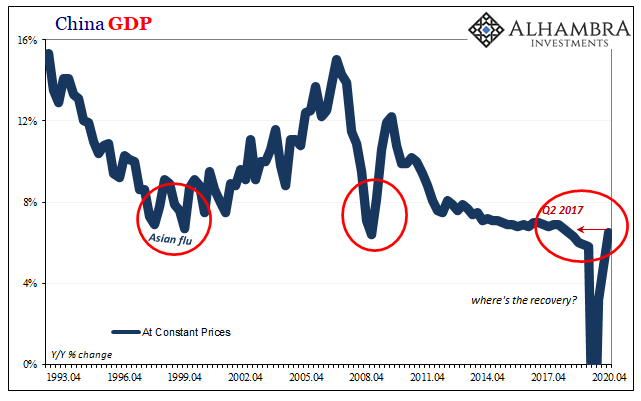 A growth rate of 6.5% puts the “roaring” Chinese economy on pace with the middle of 2018, back when China’s system was enduring powerful questions about a slump which “unexpectedly” wrecked the last reflationary party before being wrongly assigned to “trade wars” in order to discount and dismiss what actually became a globally synchronized downturn.

This anemic 6.5% follows what had been, by far, the worst economic quarter since the Cultural Revolution and then two more notable only for how noticeably contrary to all “V” expectations.

This isn’t really the main point, however, merely the explanation for how what is will predictably continue to fly under the Western radar. During this “roaring” six point five, Chinese officials, particularly those at the central bank, declared an open “no sharp turns” policy for the year ahead – this year, 2021.

What does “no sharp turns” actually mean? If you believe China’s economy is going gangbusters here, then this sounds terrific; the “stimulus” spigots to remain open for first the Chinese and then the rest of the world into reflationary liftoff sufficient to finally achieve inflationary nirvana. The throttle at full speed.

That’s not actually what the PBOC yes-men had said, though. Chen Yulu, a PBOC Vice Governor, more carefully explained to members of the media just a week ago that “no sharp turns” really means:

In accordance with the development in the pandemic, the economy and society at the current stage, PBOC will be flexible in implementing the intensity, pace and focus of monetary policy, and maintain the growth rates of money supply and [aggregate] social financing to basically match the nominal economic growth rate.

Yeah, I know, a bunch of buzzwords. These particular catchphrases are consistent with the more explicit and forthright explanation Chen’s running mate at the press conference, Sun Guofeng, gave off. As head of the PBOC’s monetary policy department, Sun dryly declared:

Currently, the Chinese economy has returned to its potential output level, corporate credit demand is strong, money and credit have grown reasonably, indicating that the current level of interest rates is appropriate.

Taken together, “no sharp turns” means quite simply that this is what it is; what you see right now is what you’re going to get out of China over the year, and years, ahead. As Chen explained, the PBOC will make adjustments as necessary should conditions warrant, but that focus is “maintain” not boost, strengthen, and get roaring again.

So far as policymakers are concerned, Q4 represents the finish line rather than merely the first step.

Thus, “returned to its potential output level.” As we’ve been saying consistently since the 19th Party Congress way back in October 2017, it’s wise to take them at their word when it comes to the official position on Chinese economic growth (and, obviously, what officially counts as “potential”).

Even with an economy suffering outright contraction in 2020, huge rescues were certainly talked about but remained conspicuously absent from the data. There had been, at best, a minimal response (see below) and that goes for the PBOC, as well, not that you’d know it from mainstream interpretations derived from deceptive Chinese government descriptions of their relative position when compared to the rest of the world. 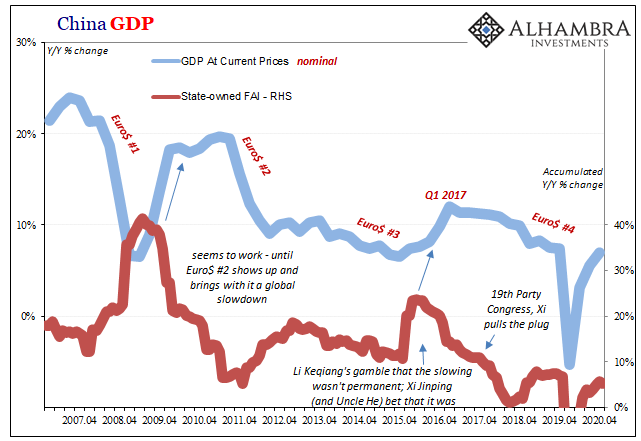 Full year, real GDP in China grew by 2.3% making the Chinese economy the lone entry in the plus column for 2020. As I wrote before, they’ve quite intentionally grabbed the label of “cleanest dirty shirt” and are content to run away with it. And you can understand, given these misconceptions, why they would.

The rest of China’s data, on the contrary, demonstrates very well “no sharp turns” as it pertains to “returned to its potential output level.” That level isn’t what you’re left to believe otherwise.

Industrial Production rose 7.3%, boosted by China making temporary use of a global economy largely shuttered everywhere else – and still it could only manage 7.3% at best, huge contributions to the panicked Western demand for healthcare goods included. In terms of fixed investment (FAI), it has rebounded like anything else but ended 2020 under a cloud of suspicion on the private side (due to how the data is calculated, which is beyond the scope of this presentation). 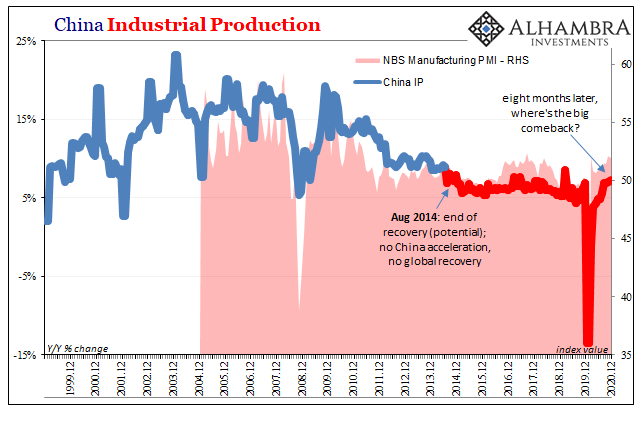 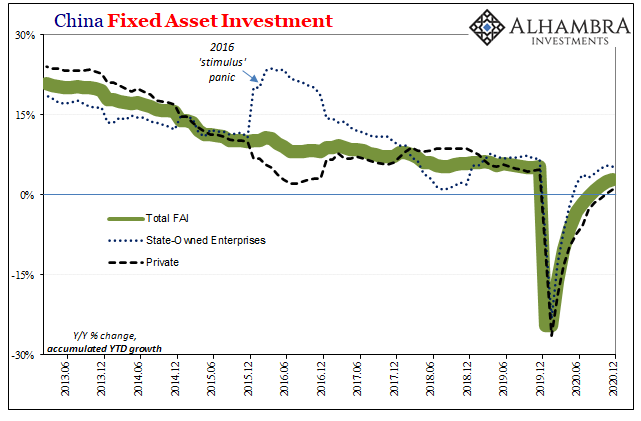 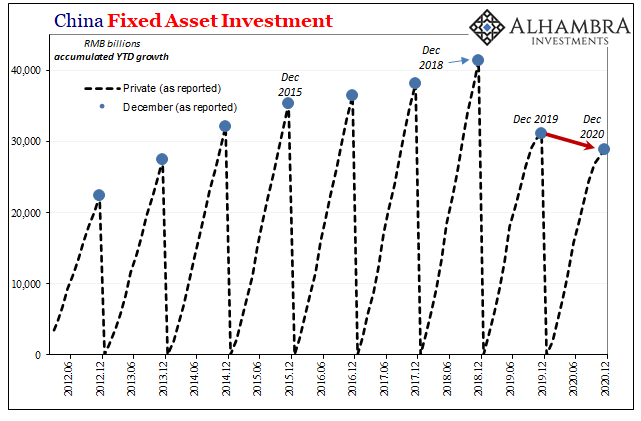 What that leaves are the faded remnants of “rebalancing”, the very sector into which purportedly massive “stimulus” has been intended. Retail Sales growth actually declined in December compared to November, with many Economists blaming cold weather (as if this was January 2014’s North American Polar Vortex reborn and relocated). Even so, going from 5.0% in November 2020 to 4.6% in December simply highlights the lack of roaring, fired up internal Chinese demand.

From that, China’s government is flat out stating “no sharp turns.” When the Chinese economy is at its potential flattened out at these consistently low levels, this also and actually means no one should expect a sharp turn upward, either.

Listen to Xi – and his minions – because the West has fallen prey to inflationary dreams not even the Communist Chinese dare dream. They are thrilled if you believe otherwise. 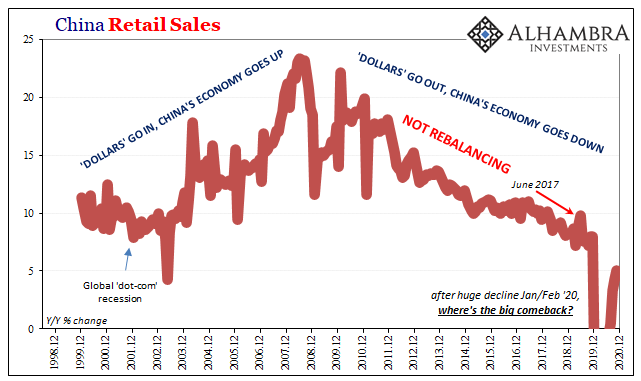 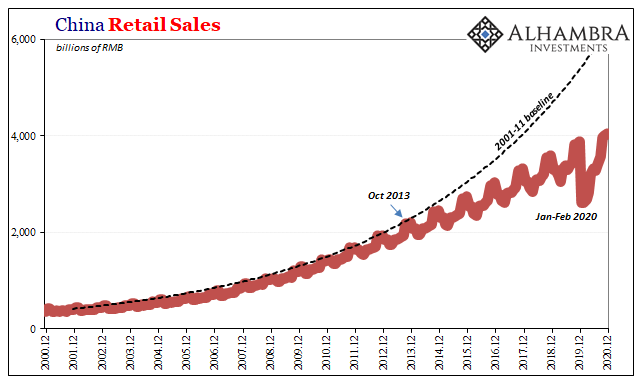 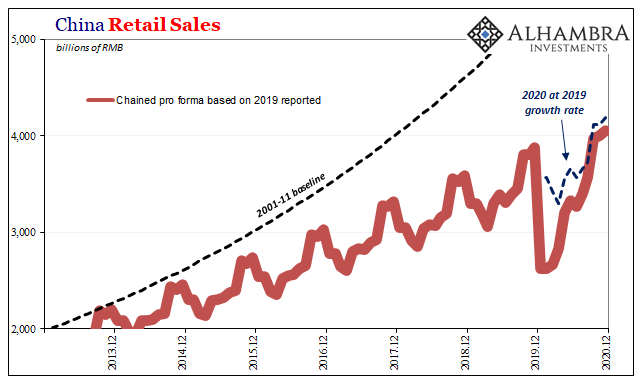